On a summer night in 1992, rock star Michael Hutchence was on a bicycle weaving slowly down a Copenhagen back street with his Danish supermodel girlfriend Helena Christensen. They had just bought some pizza and were heading home.

A local taxi drew up behind him and, finding he was unable to pass, started an argument with the singer.

The row escalated quickly and the driver punched Hutchence, who fell to the ground, hitting his head on the kerb. He was knocked unconscious, with blood coming from his mouth and ear. As the cabbie fled, Christensen feared for her lover’s life. ‘I thought he was dead,’ she admits.

Paula Yates with Michael Hutchence, their baby Tiger Lily and Peaches Geldof at a Versace fashion show in Milan, 1997 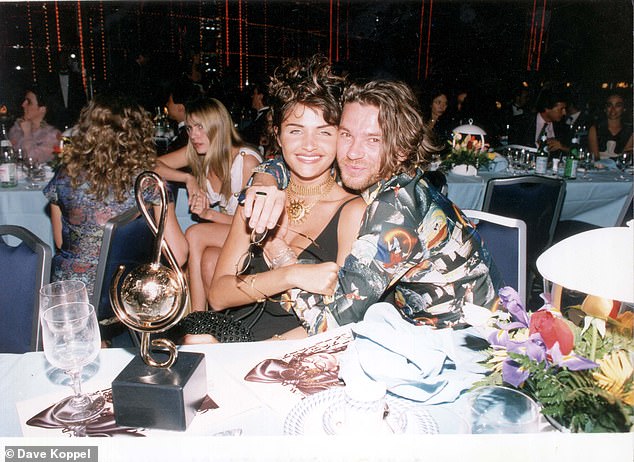 Michael Hutchence with Helena Christensen at the 1992 World Music Awards in Monte Carlo, just months before the fateful incident that changed his life

Hutchence had sustained significant brain damage when he fell, an impairment that would profoundly affect his personality.

Christensen takes up the story. ‘This insane taxi driver punched him,’ she confirms, speaking on the record about the attack for the first time. ‘We got to the hospital and Michael woke up and was aggressive. They were trying to make him stay but he was physically pushing them away.’

Hutchence went to convalesce in Christensen’s apartment but, she reports, he was ‘throwing up most of the time.

‘I would bring him food and he would push it away – he almost got violent.’

She pleaded with him to return to hospital but he was ‘aggressively against it’.

The head injury had changed Hutchence, who had always been a gentle, carefree character.

It is easy now to forget just how big INXS were at the time.

They headlined the Australian leg of Live Aid, played sold-out stadia for a decade and their sixth album, Kick, sold more than 20 million copies and spawned four Top Ten singles in the US.

Their taut funk-rock bridged a gap between Duran Duran and U2, but it was Hutchence – like a feline Jim Morrison – who provided the band’s magnetic allure.

Having been on tour with INXS as a journalist several times since the late Eighties, I’d come to know him well. Hutchence was a sweet and mischievous fellow, supernaturally relaxed, mildly pretentious on occasion, but instantly likeable. 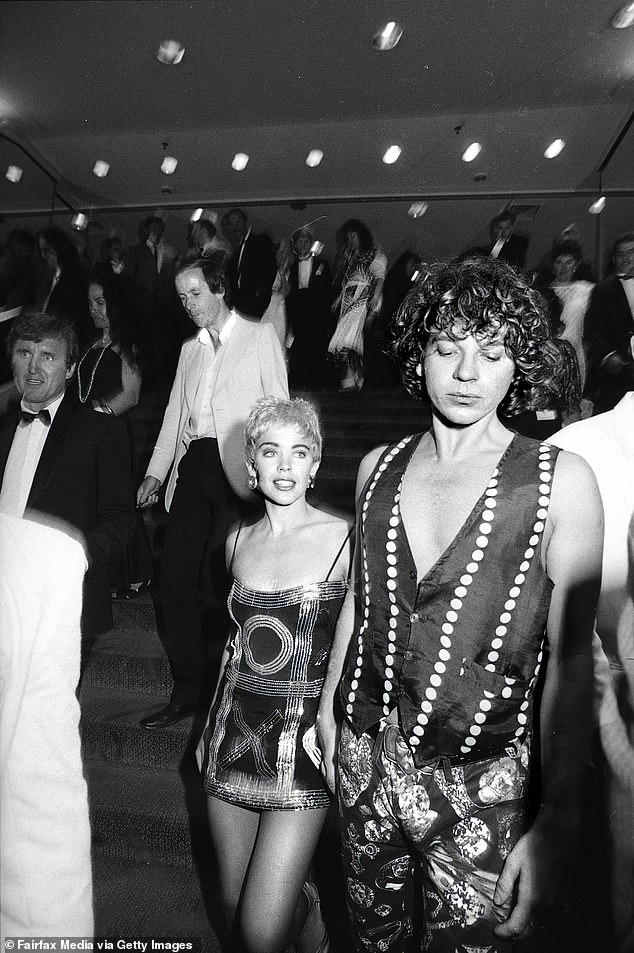 Hutchence leaving the premiere of The Delinquents in 1989 with Kylie Minogue, the film’s star

He confessed, in confidence, that the punch he received in Copenhagen had ruined his sense of smell and taste. As a card-carrying bon viveur, life without the ability to savour gourmet food and fine wine (‘the old French Fosters’) was hugely frustrating.

Hutchence was also a highly sensual being. ‘I can’t smell my woman,’ he said. ‘Her hair, her beautiful skin, her scent.’

There was a rumour that the incident had left him impotent. One in four people who suffer a similar head trauma can lose their sex drive. Not so Hutchence.

‘I can assure you everything in that department is working fine,’ he laughed. ‘Ask Helena.’

Much of the time, Hutchence appeared to be what he jokingly termed as ‘fit, trim and fabulous’.

The only marked downturn in his behaviour that I observed was after the World Music Awards in Monaco in 1994, two years after the assault.

Hutchence had always been a robust drinker and recreational drug user but that evening, in a glitzy Monte Carlo disco, Hutchence was out of control.

He tried to instigate an altercation with Prince – the reclusive superstar was attempting to enjoy a rare evening out in the wealthy principality. The contretemps exposed many of Hutchence’s vulnerabilities.

The tousle-haired rocker had always complained that his art wasn’t taken seriously. Now he was confronted by the most revered artist in modern music. ‘You little symbol, you!’ Hutchence hissed across the dancefloor at Prince, who had recently changed his name to a baffling squiggle. ‘You leetle artiste!’

He stumbled up to the DJ booth insisting they played a selection of Prince songs, to which the plastered Australian danced appallingly in an uncharacteristically gauche display. ‘Put something on by that Michael Hutchence guy,’ he yelled. ‘He’s better than this merde!’ 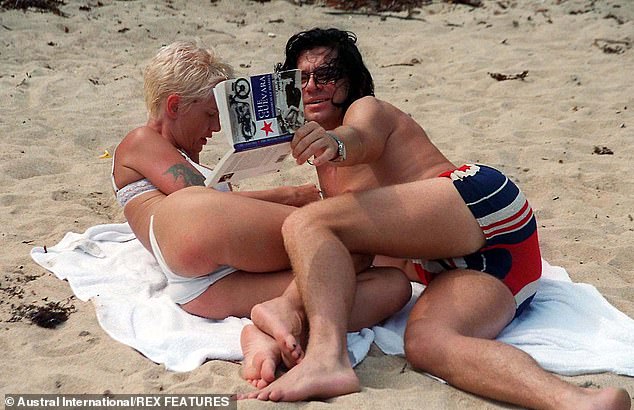 Paula Yates and Michael Hutchence (with a copy of Che Guevara’s The Motorcycle Diaries) on Magnetic Island, north-east Australia, in 1997

Prince looked on pouting and, at one uncomfortable juncture, mouthing, ‘Who’s your friend?’

It all ended in tears, with Hutchence weepily proclaiming undying love for Christensen as she poured him into a cab.

But she couldn’t cope with his increasingly erratic mood swings and reluctantly ended their relationship. ‘Something drastic happened,’ she says. ‘I was deeply sad, confused and bewildered, but at the same time it couldn’t have continued that way.’

Women didn’t usually leave Michael Hutchence. They adored him. Prior to dating Christensen, Hutchence had embarked upon an unlikely love affair with Kylie Minogue, who was then seen as a featherweight pop star who embodied a smiley innocence.

It was widely believed that leather-trousered Hutchence was hell-bent on corrupting Kylie, although he insisted that the reverse was often true. ‘Listen, whose bag did they find the handcuffs in at the airport?’ he would cackle, alluding to a customs discovery at Heathrow earlier that year. ‘Mine or hers?’

It was certainly a relationship that opened Minogue’s eyes. ‘Sex, love, food, drugs, music, travel, books, you name it, he wanted to experience it,’ she explains in Mystify. ‘He had insatiable curiosity. He awakened my desire for other things.’

Kylie worshipped Hutchence but work schedules gradually drew the relationship to a close.

Shortly after the affair ended, still full of sex-god swagger, Hutchence declared himself to be ‘a f****** great rock star’.

‘The others are all pretenders,’ he fumed. ‘They have choreographers and people to do their hair, make-up artists, managers who tell them what to wear. I’ve never done that. Ever.’

Later, he reflected: ‘Rock ’n’ roll is the perfect scenario for people who need a lot of attention, who were ignored as kids. It’s the most ridiculous situation. It used to be that as a rock star everyone was happy if you killed yourself.’

The following year, Hutchence would become embroiled in a tragic celebrity soap opera that would play out worldwide. The trouble began when TV presenter Paula Yates left her husband Bob Geldof for Hutchence in 1995.

Put simply, he was out of his depth with Yates.

Having won Hutchence over, she flipped from doting mother and devoted wife to reckless rock chick, virtually overnight.

Hutchence had fallen for Yates’s looks, intelligence and powerful presence but, in reality, he didn’t know what he’d let himself in for. He was trying to accommodate a wildly unpredictable partner and win the acceptance of her three young children, while being relentlessly pursued by the paparazzi. It was all too much.

For a time, Hutchence sought solace in oblivion: opiates, tranquillisers, booze. And although she had been a lifelong teetotaller, and despite being mother to a one-year-old, Yates joined him on his hedonistic quest.

The results were predictably messy. They were endlessly photographed tumbling pie-eyed and pathetic out of once-fashionable night-spots.

The headline-hungry Yates bragged that Hutchence had ‘the Taj Mahal of crotches’ and claimed that they had all but rewritten the Kama Sutra. Inevitably, she fell pregnant. This, to her mind, cemented the relationship and proved Hutchence’s love for her. But he was intensely unhappy, the disarming smirk and languid charm having long since departed. Hutchence became lost in a haze of hard drugs and despair.

At the 1996 Brits, he presented Oasis with an award for their Wonderwall video. Instead of an acceptance speech, Noel Gallagher took the opportunity to announce that ‘has-beens shouldn’t be presenting awards to gonna-bes’. Hutchence, who called Gallagher ‘a mate’, was crushed and never recovered.

More Class A drugs, dramas and depression followed before a chilling darkness descended.

Drunk, drugged and distraught in room 524 of the Ritz-Carlton in Double Bay, Sydney, he hanged himself from a door with his belt, aged 37. An autopsy showed that cocaine, alcohol and Prozac, along with other prescribed medication, were in his blood at the time of death.

Their daughter, Tiger Lily, is now 23 and has her father’s burning brown eyes and innate elegance. She receives a ‘very special thank you’ in the closing credits to Mystify, which she has seen once and ‘loved’ but won’t watch again.

Her father’s close friend Bono wrote U2’s heart-wrenching song Stuck In A Moment You Can’t Get Out Of about the turmoil Hutchence endured before his suicide. In Mystify, Bono recalls his fellow free-spirited frontman with deep affection.

‘I remember asking Michael what his definition of rock ’n’ roll was,’ the Irishman recounts emotionally. ‘He said, “Liberation.” ’

Hutchence, who would have celebrated his 60th birthday this coming January, might still be relishing that freedom were it not for a dark turn in the road and a single, fateful blow.

‘Mystify’ is in cinemas from October 16, mystifyfilm.co.uk; the soundtrack is out now on UMG