‘Does it get worse the more you think about it?’ Hilary asked.

I laughed. He was serious. ‘That’s its name. It’s a mild stress-related reflux condition.’

Flicking through the papers, I noticed a photo of James Bond star Daniel Craig carrying his new daughter in a papoose.

Flicking through the papers, I noticed a photo of James Bond star Daniel Craig carrying his new daughter in a papoose. ‘Oh 007… not you as well?!!!’ I tweeted

Last week, I got into a lively debate with Susanna Reid over these baby slings, which I think look ridiculous on men.

This was the final straw.

Instantly, indignant papoose-loving fathers across the planet erupted with their own form of globus hystericus, led by Captain America movie superstar Chris Evans, who raged: ‘You really have to be so uncertain of your own masculinity to concern yourself with how another man carries his child. Any man who wastes time quantifying masculinity is terrified on the inside.’

‘Captain America would never wear one,’ I retorted.

Nor, I’m equally certain, would James Bond – can you imagine Moneypenny’s crushed face if he appeared in M’s office with a papoose?

Yet Susanna, who once told me her ideal man would be 6ft 2in, tattooed and military, insisted with a straight face: ‘I’ve never seen James Bond look sexier! Papooses set women’s ovaries in motion!’ Oh pur-lease.

As with all Twitter storms, I was soon accused of being ‘sexist’ for implying only women should wear papooses and ‘racist’ for using the word papoose at all because it was first coined by Native Americans.

Papoose-gate has exploded across the world’s mainstream media.

The ‘most read’ story on the BBC News website today was about papooses, not Brexit.

Newsnight did a mocked-up montage of macho men with papooses, from Marlon Brando and Sean Connery to Muhammad Ali and Clint Eastwood – all of course looking absurd.

Even NBC Nightly News – America’s most prestigious news programme – ran a two-minute piece on the debate, prompting BBC Middle East Editor Jeremy Bowen to ponder when I posted it on Instagram: ‘Power of social media or the power of Piers Morgan?’

Kirstie Allsopp, who regularly tweeted controversial (and invariably correct) statements, then quit Twitter when everyone went bonkers, emailed: ‘You’re right, there is something a bit ugh about it. It’s what a certain type of “I’m all over my kids and want everyone to know it” dad does. Anyhow, getting a pasting is never fun, so sending you supportive hugs.’

‘Thanks,’ I replied, ‘but I’m loving the pasting.’ And I was, as the faux fury grew increasingly comical.

Bette Midler, Hollywood’s most demented Trump-basher, inevitably brought the President into the debate, tweeting me to seethe: ‘Yes, if only he [Craig] could sport badly dyed cotton-candy hair painstakingly swirled like a cinnamon bun to cover scalp surgeries – AND IF ONLY he could lie countless hours on a tanning bed to keep his complexion a bright, crispy orange. Then – and only then – would he be a real man.’

I knew exactly who to turn to for a PC-devoid perspective. ‘You should do a papoose gag in your show,’ I messaged Ricky Gervais, ‘it sends people NUTS.’

He replied: ‘How about: “I went back to my old estate in Reading. So rough. I was shocked to see one of the hoodlums carrying a baby in a papoose… but relieved to find out it was just because it was cheaper than a stab vest.” ’

Ross Kemp came on GMB to furiously defend papooses, wearing one with a teddy bear inside. ‘It shows you care, Piers!’ he exclaimed. No mate, it shows you’ve lost your marbles.

Comedian Harry Hill was also a guest, ostensibly to teach Susanna and me how to make large custard pies. Of course, he promptly pied me in the face, after declaring: ‘This is for Ross Kemp, for Daniel Craig, for all the guys who wear papooses!’

‘You OK?’ asked giggling Susanna, with fake concern. So I pied her, and then Hill. It was a suitably farcical end to a barmy few days.

Craig’s wife, Rachel Weisz, was asked about Papoose-gate on the red carpet of her new film The Favourite. ‘What is a papoose?’ she replied, bemused.

I find this encouraging – perhaps she has no idea Daniel’s been sneaking out in one. 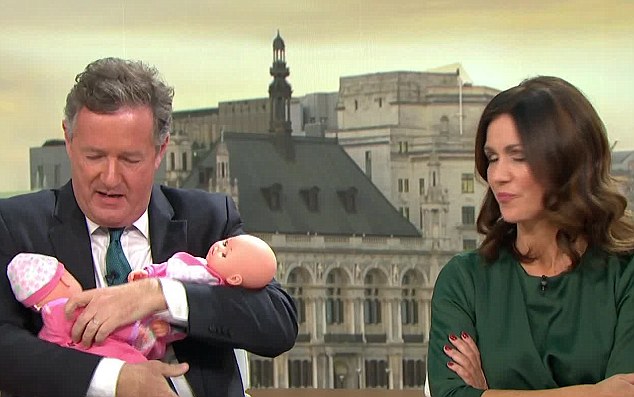 I’ve never said a man caring for his child is emasculating, only that wearing a papoose is. My final thought is this: male kangaroos don’t have pouches. Do the maths

Scotland’s topical comedy show Breaking The News noted my opposition to papooses was ‘rather ironic’ given ‘the ability to carry a screaming, temperamental child is the reason Susanna Reid got the job as his co-presenter’.

Ironically, after a globally hysterical week, my globus hystericus has cured itself.

Apprentice star Karren Brady has whacked me for supposedly suggesting it was ‘sissy’ or ‘demeaning’ for a man to care for his baby, and thus damaging the battle for gender equality. But I’ve never said a man caring for his child is emasculating, only that wearing a papoose is. After all, I’ve carried my own four children for years – with my own arms, and on my own shoulders.

Daniel Craig has been snapped again in New York, this time carrying his baby without a papoose. He looked magnificently manly – I rest my case. My final thought is this: male kangaroos don’t have pouches.