Residents could be fined $220 for spraying pink fire retardant off their driveways, cars or houses after it was dropped in danger zones

Residents could be fined $220 for hosing away pink fire retardant from their cars, homes or driveways.

Large patches of pink coloured driveways, gardens and cars left a pungent smell in the air as 37C temperatures threatened to aggravate the catastrophic fire threat. 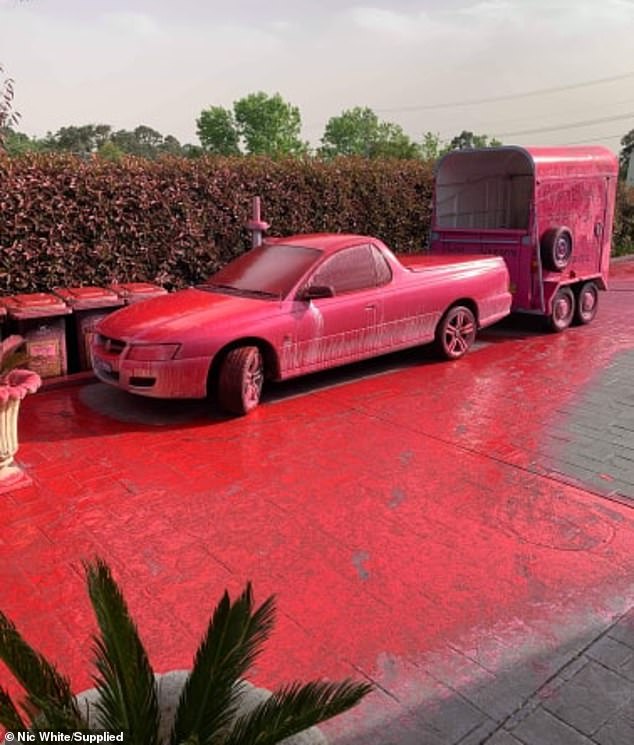 Houses near the Canoon Road tennis and netball courts were covered in a fertiliser-based retardant, containing ammonium, diammonium sulphate and ammonium phospate (pictured is a Holden Commodore ute covered in fire retardant on Barwon Avenue in South Turramurra)

Tips for cleaning fire retardant off a car

Motorists who get pink fire retardant on their car are urged to use a mild detergent and a brush to scrub it off.

It then needs to be diluted again flushed with clean water from the surfaces.

Someone washing their car is advised to wear gloves and non-slip shoes.

Under strict new level one water restrictions in Sydney, motorists are only allowed to hose down their car if there’s a trigger nozzle fitted or it’s not a high pressure device.

Those who disobey these rules face being fined $220.

Houses near the Canoon Road tennis and netball courts were covered in a fertiliser-based retardant, containing ammonium, diammonium sulphate and ammonium phospate.

The New South Wales Rural Fire Service has admitted the fire retardant had the potential to cause breathing problems.

‘The concentrated powder may cause minor respiratory irritation, to workers who are handling it,’ it said.

This fire retardant is unrelated to a PFAS chemical that was used on Defence bases, with American environmental activist Erin Brockovich linking that substance to cancer.

It does, however, have the potential to cause health problems if came into contact with skin or was swallowed.

The RFS has advised anyone who had the fire retardant in their eyes to ‘rinse the area with fresh water for 15 minutes then consult a doctor’. 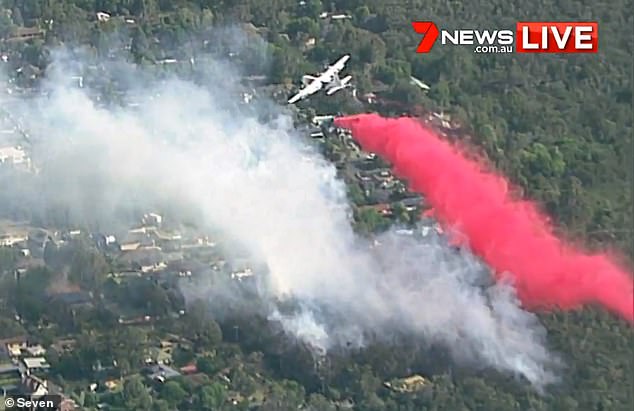 The New South Wales Rural Fire Service has admitted the fire retardant, tested on animals, had the potential to cause breathing problems (pictured is an aerial view of the fire retardant being dropped over South Turramurra on Tuesday afternoon)

‘If fire suppressants come into contact with skin wash thoroughly with a gentle soap,’ it said.

‘If swallowed, rinse your mouth out with fresh water; then consult a doctor.’

Since September, Sydney residents have faced $220 fines under strict new water restrictions that make it illegal to hose down a driveway.

The same fines will also apply for anyone washing their car or their house with a hose that isn’t fitted with a trigger nozzle or a high-pressure cleaner.

‘We’d be able to have some discussion with Sydney Water,’ he told Daily Mail Australia.

The fire retardant has also sparked outrage from animal right activists, with the RFS admitting ‘irritancy testing on animals shows these chemicals have little effect’.

Vegan Australia director Greg McFarlane said it was regrettable animal testing was still used on a range of chemicals. 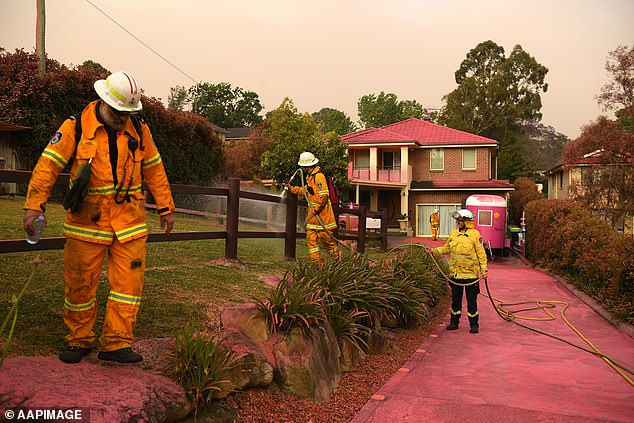 The fire retardant, sprayed over this house on Barwon Avenue in South Turramurra, does have the potential to cause health problems if came into contact with skin or was swallowed

‘Animals are clearly suffering. The question is whether their suffering outweighed the possible benefits,’ he told Daily Mail Australia on Wednesday.

‘We’re always looking for alternatives to these tests.

‘Vegan Australia supports research into these more advanced techniques that do not cause suffering to animals.’

The pink fire retardants are meant to slow and prevent fire combustion.

It is mixed with guar gum, a substance used in food processing, to increase the viscosity.

The pink food dye is added later so firefighters can see where they have dropped it, with the substance designed to degrade in sunlight.