Juan Guaido’s plot to oust Venezuelan President Nicolas Maduro failed after a key ally got spooked by a last-minute change of plans and pulled out, it has been revealed.

Maikel Moreno, Chief Justice of Venezuela’s Supreme Court, had agreed to pull the plug on Maduro’s rule by issuing a decree declaring his government illegal, giving the military a legitimate reason to join with Guaido.

The plan was hatched over cigars and bottles of Fiji water on the terrace of Moreno’s Caracas mansion a week before it was due to be put into action on May 1.

But at 1am on April 30 a series of messages forced the plotters to rush their scheme forward after it appeared Maduro was about to move against them.

Moreno stopped communicating and never issued his decree, even as Guaido went to the La Carlota airbase in Caracas to say Maduro had lost military support.

Maikel Moreno, Chief Justice of Venezuela’s Supreme Court, agreed to pass a decree stripping Maduro of his powers and allowing the army to step in and remove him – but failed to come good on his pledge, a source has said 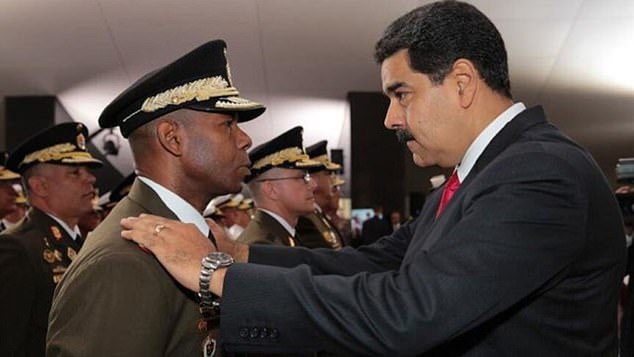 Moreno lost his nerve after fellow plotter Christopher Figurea (pictured left) sent a text at 1am the day before the plan was due to start, saying Maduro (right) was on to them

Fresh details were revealed by the Washington Post, which claimed to have spoken with a source who attended the meeting at Moreno’s mansion.

The source, who spoke on condition of anonymity, said three people attended the talks beside them – Spy Chief Christopher Figuera, Miami-based businessman Cesar Omaña, and Moreno.

Plans to force Maduro out in a bloodless uprising had been underway for a while, and included the likes of Vladimir Padrino López, Maduro’s security minister.

But the plotters had decided that they needed a legal decree to pass their scheme off – one that only Moreno could provide.

The degree would provide military leaders with constitutional cover for turning against Maduro, by effectively declaring him a usurper.

It would make their actions legal and make sure they were not accused of a coup.

In return, Moreno would be guaranteed a spot in the transitional government headed by Guido, while he and his fellow justices would be protected against prosecution. 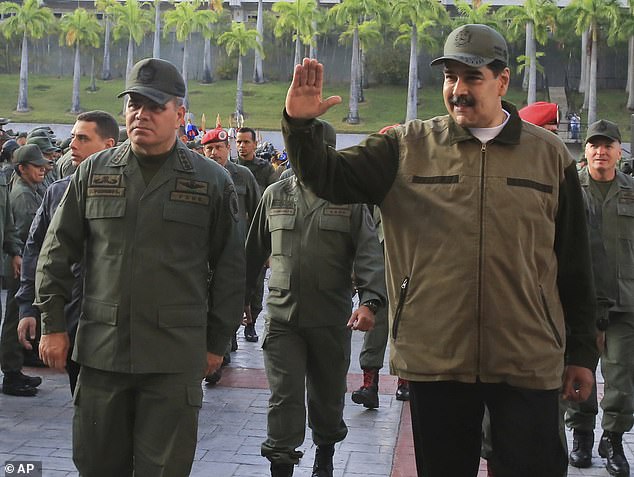 Vladimir Padrino Lopez (left with Maduro after the plot failed) has also been accused of helping the plot, but has claimed he actually ratted out the conspirators to his boss 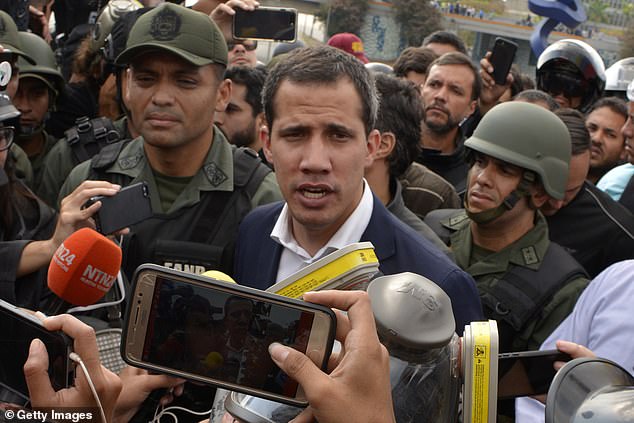 Juan Guaido announced the start of Operation Liberty a day early, on April 30, amid fears he was about to be arrested. It sparked several days of street protests, but quickly fizzled 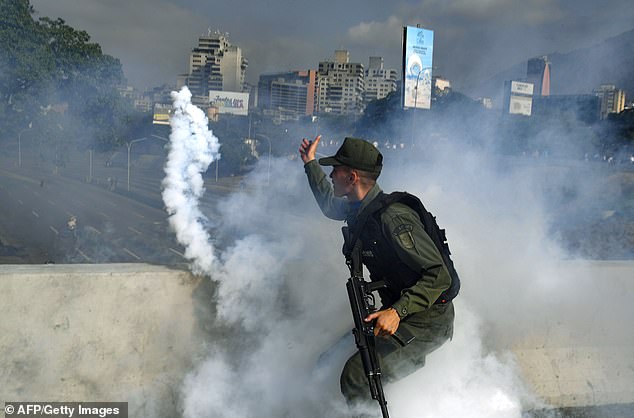 A handful of soldiers defected to Guaido’s cause on April 30, but after reinforcements failed to appear they faded away

The judge was initially reticent to sign on to the plan, even suggesting that he take the reins of power instead of Guaido, but eventually agreed.

May 1, a day of protests for workers around the world, was chosen for the start of Operation Liberty, but plans had to be moved up at the last minute.

At 1am on April 30, Figurea texted his fellow conspirators to say he was about to be replaced as head of the secret police and there were plans to transfer Leopoldo Lopez – a political prisoner under house arrest – back to jail.

Worse still, there were also rumours of a move against Guaido himself. Against that backdrop, the plotters decided their operation had to begin that day.

In the early hours of the morning Guaido put out a video on Twitter showing himself standing in front of a small band of soldiers, declaring that Maduro had lost the support of the armed forces, and was about to fall.

The move was intended as a the first domino in a chain of moves that would force Maduro out – but Moreno’s backing never came, and the uprising fizzled.

Perhaps in an attempt to force Moreno’s hand, Secretary of State Mike Pompeo later named him as one of the chief plotters against Maduro, to no avail.

The judge has since said he backs Maduro, while Vladimir Padrino has also thrown his backing behind the incumbent. 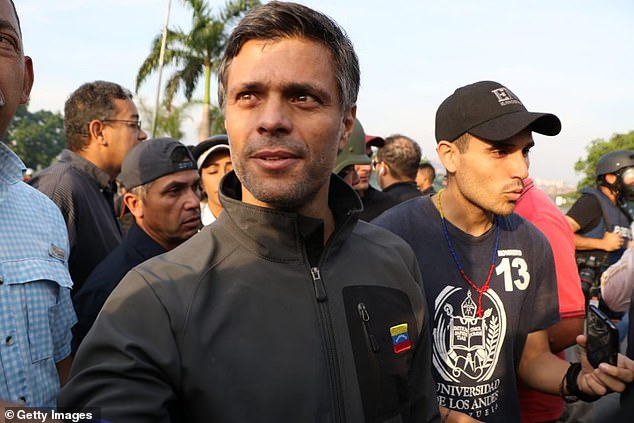 Leopoldo Lopez, founder of opposition party Primero Justicia and a political prisoner, was also accused of helping orchestrate the plot while under house arrest 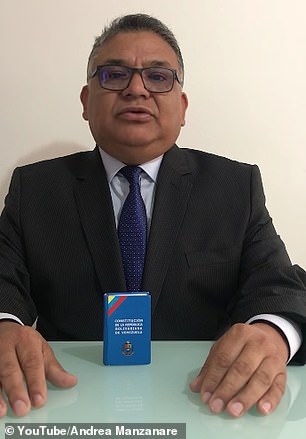 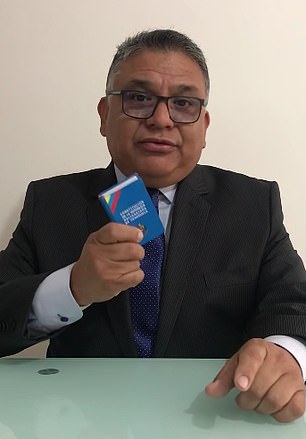 Maduro says he has full confidence in both Moreno and Padrino, saying they informed him of the plot a week in advance alongside presidential guard commander Ivan Hernandez.

Figuera has been forced into hiding after Maduro branded him a ‘traitor’, while 10 opposition lawmakers have been charged over what the President terms a ‘coup’.

Among them is Guaido’s deputy, Edgar Zambrano, who was arrested outside congress after security forces hooked his car to a tow truck and drove off while he was still inside it.

However, Maduro has not moved against Guaido amid threats of unspecified ‘consequences’ from the US if he does so.

The plotters have also not given up hopes of pushing Maduro from his perch, but acknowledge the process will take longer than they hoped.

On Monday an air force general, Ramon Rangel, joined the calls for Maduro to go, saying the country is being controlled by the ‘communist dictatorship’ in Cuba.

‘We have to find a way to get rid of the fear, to go out into the streets, to protest, and to seek a military union to change this political system,’ said Rangel on YouTube.

Dressed in a suit with a copy of the constitution in his hand, he added: ‘It’s time to rise up.’