How police use ‘DNA spray’ to catch moped criminals

Police are spraying moped criminals with so-called ‘DNA spray’ as part of the new blitz on scooter gangs.

The invisible liquid can be used to link suspects to mopeds used in crime and prove their involvement when cases come to court.

One moped yob who fell foul of the new tactic is Mohammad Khaleghi, who was sprayed with the substance as he rode his moped dangerously in Camden in May in this year.

Khaleghi rode along pavements, through red lights, against oncoming traffic and along cycle paths as he tried to get away from police.

He was sprayed by an officer on a motorcycle as he fled in case he later need to be connected to the crime.

In this instance, police managed to catch up with him and he was arrested.

Scotland Yard released photos of him under UV lights to show how their new spray works.

Chief Inspector Jim Corbett said ‘Khaleghi not only failed to stop for police but rode at speed through several red traffic lights.

‘He took off his helmet and he continued to ride through bollards onto a cycle path and then on a pavement being used by pedestrians.

‘His riding was extremely dangerous and he endangered other motorists and people as well as himself.

‘Khaleghi thought that if he removed his helmet we would not continue to pursue. He was wrong. We continued in the pursuit and he was caught and has been jailed.’ 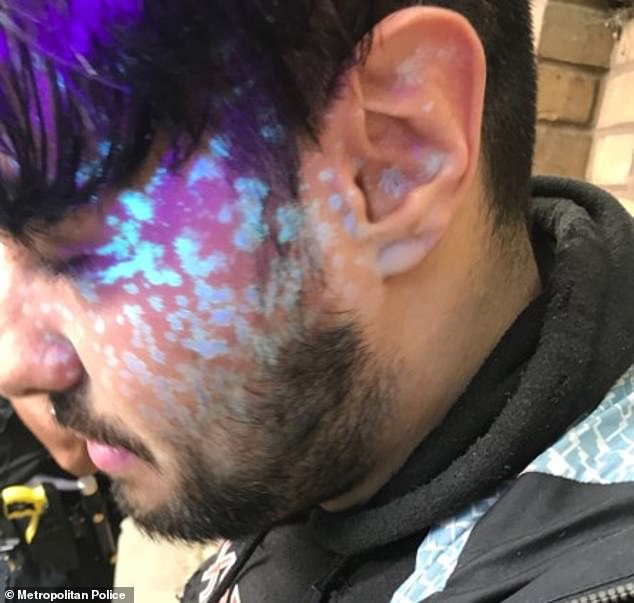 The spray is visible under UV light, even in daylight, and helps link criminals to crimes

He was spotted by specialist officers riding erratically through Camden on May 5 and started following him.

According to a Scotland Yard spokesman: ‘A police officer from Operation Venice (which tackles moped crime) on a police motorcycle, noticed Khaleghi riding in an erratic manner along Adelaide Road and so followed him.

‘On Boundary Road Khaleghi went through a set of red traffic lights at speed. He did the same on Finchley Road which is a busy three lane ‘A’ road. He turned left onto Hillgrove Road, then left onto Alexandra Road, then through width restricting bollards on Dorman Road, riding onto a pedal-cycle path and then back out onto Finchley Road.

‘A marked police Scorpion car overtook Khaleghi and indicated for him to pullover and stop. Instead, Khaleghi accelerated away from the officers, discarding his helmet as he did so.

‘The helmet was recovered by police. On Avenue Road, Khaleghi rode against oncoming traffic on an opposing carriageway before riding on the pavement, endangering members of the public.

‘Another police vehicle safely ended the pursuit by pulling in front of Khaleghi and making tactical contact with his motorcycle to stop it going any further. Taken off his scooter, Khaleghi fled on foot.

‘The motorcycle officer managed to spray him with DNA spray, which would assist in proving he was the suspect should he manage to escape and be recaptured at a later date.

‘However, he was caught and detained by officers and arrested on suspicion of dangerous driving, failing to stop for police, and driving without insurance. Khaleghi was taken to a north London police station where he was later charged with dangerous driving, failing to stop for a police constable, driving otherwise in accordance with a licence and driving without insurance.’

Over 6,000 new forensic tagging sprays have been handed to local officers on London’s streets.

Chief Inspector Jim Corbett said: ‘6,900 officers have been trained so far. We are going to train everyone.