How police use unmarked HGV to catch motorists on mobiles

Sneaky truckers! Traffic cops use unmarked HGVs to catch thousands of drivers – by peering down into vehicles to spot motorists on mobiles, speeding or not wearing their seatbelts

Police sitting in unmarked HGV lorries are secretly filming drivers not wearing seatbelts or on their mobile phones.

Forces around the country are employing the method to catch out drivers eating or reading at the wheel.

Last year, Highways England revealed more than 4,000 drivers have been caught by just three of their unmarked HGVs. Hundreds more meanwhile have been detected by police trucks.

Officers sit in the cab of the lorries – which do not tow trailers – and film any drivers committing offences.

Northamptonshire is the latest to use the lorries, catching 43 drivers committing more than 50 offences in a recent blitz.

The force’s PC David Lee said: ‘Being high up gives us a good vantage point for observing the actions of drivers of large vehicles, and also allows us to look down into cars and smaller vans and clearly see if people have their seatbelts on or are using phones or adjusting sat navs.’

The method for catching drivers was first used by police three years ago and has since been picked up by forces around England and Wales.

Earlier this year, one of the Highways England lorries caught a lorry driver with his foot on the dashboard while he used his phone.

A crackdown last year meanwhile saw 213 people being stopped for various offences, including 12 caught for reading books and eating behind the wheel. 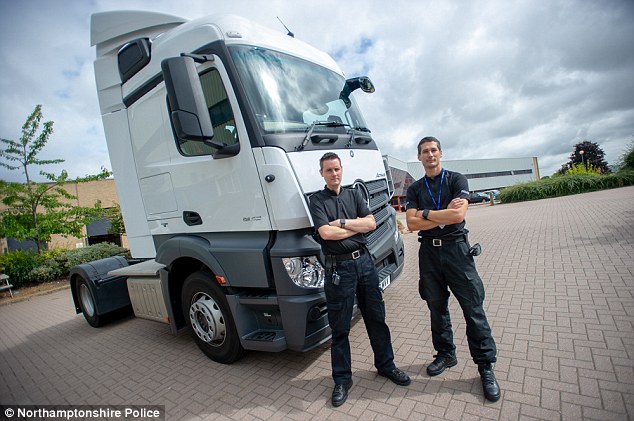 Northamptonshire is the latest force to use the method, catching 43 drivers this month 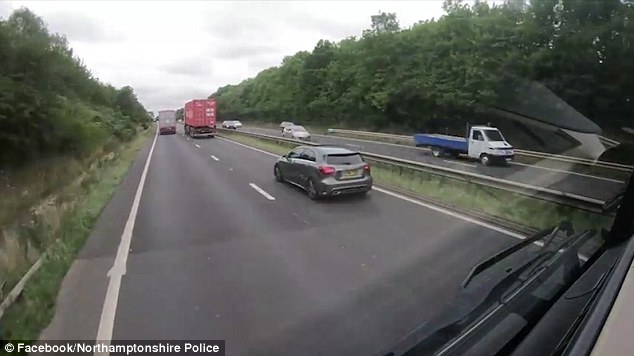 Richard Leonard, Highways England’s Head of Road Safety, said in February: ‘We’ve found that the vast majority of drivers are sensible behind the wheel but a few have got into bad habits, or are simply ignoring the law and putting themselves and others at risk.’

A total of 28 police forces have taken part in the HGV cab safety initiative since it began in April 2015.

More than 4,176 drivers were pulled over in relation to 5,039 offences in its first two years – nearly two thirds of whom were using a mobile phone while driving.

Eating, steering with knees and even brushing teeth behind the wheel were other offences identified by officers.

Last year the government doubled the penalty for drivers caught using their phones at the wheel.

Motorists now receive six points on their licence and a £200 fine.

Eating breakfast, putting on make-up and playing the BONGOS: The crazy things drivers at the wheel

Despite repeated warning about becoming distracted from the road, British drivers have been caught eating, doing their make-up and even inhaling laughing gas while behind the wheel this summer.

In May, a woman with a child in the back seat of her car was photographed applying mascara and lipstick while travelling on a 40mph dual carriageway.

She was looking in the mirror on her driver’s side sun visor of her white Honda in Wessex Way in Bournemouth.

And in June, road users were shocked after a driver was seen cruising along the A41 Finchley Road, London with a bowl and spoon in hand, eating some breakfast cereal.

Also in June,  a Vauxhall driver was seen playing the bongo drums while driving along the A46 near Coventry, West Midlands.

But it’s not just civilians who get caught breaking the rules. In March, an unnamed West Yorkshire Police officer was filmed speaking into his handset while waiting at a set if traffic lights in Bradford.