How polluted is the air where YOU live? Shocking interactive tool reveals levels of toxic pollutants

While most people in cities will be unsurprised to learn they live in an area with high air pollution, the full extent of the problem in the UK has been revealed.

An analysis by the Central Office of Public Interest (COPI) has revealed how 97 per cent of UK addresses now breach at least one of the World Health Organisation’s limits for toxic pollutants.

COPI has created an interactive tool that lets you check what the air pollution levels are at your address, as well as its ranking relative to other addresses in the country.

Humphrey Milles, founder of COPI, said: ‘Air pollution affects all of us. It’s a group one cause of cancer, just like asbestos.

‘With this new accurate data now publicly available, it would be shameful for the property industry to not start acting transparently. Lives depend on it. Everyone has a right to know what they’re breathing before they buy or rent.’

An analysis by the Central Office of Public Interest (COPI) has revealed how 97 per cent of UK addresses now breach at least one of the World Health Organisation’s limits for toxic pollutants. This map shows the average address pollution percentile across the UK

What is particulate matter?

COPI sourced and mapped the air pollution levels recorded at 20,000 sites in over 320 UK council areas.

The interactive tool, which can be accessed at addresspollution.org, reveals how air quality varies across the UK.

For example, Buckingham Palace, which is in the heart of London, falls into the 98th percentile, with some of the highest air pollution levels in the UK.

In contrast, Balmoral Castle in Aberdeenshire has some of the cleanest air in the UK, and falls into the lowest percentile.

Unsurprisingly, major cities across the UK have some of the highest levels of air pollution.

However, some addresses in Kent, Bath and East Anglia were also found to fall into the top percentile for dirty air.

‘We all have our own part to play in this. Air pollution isn’t insurmountable and we can all do something about it,’ Mr Milles said.

Last year, a Southwark coroner ruled that air pollution contributed to the 2013 death of Ella Adoo-Kissi-Debrah, nine, who lived 80ft from the South Circular road in Lewisham, south-east London.

As part of the ruling, he asked the Government to explain how it would prevent future deaths – leading to the pledge from ministers to set aside an extra £6million for local authorities to improve air quality and raise public awareness.

The coroner’s report, following a second inquest which ruled that air pollution contributed to Ella’s death, called for legally binding goals for dangerous pollutant particulate matter (PM2.5) that are in line with WHO guidelines. 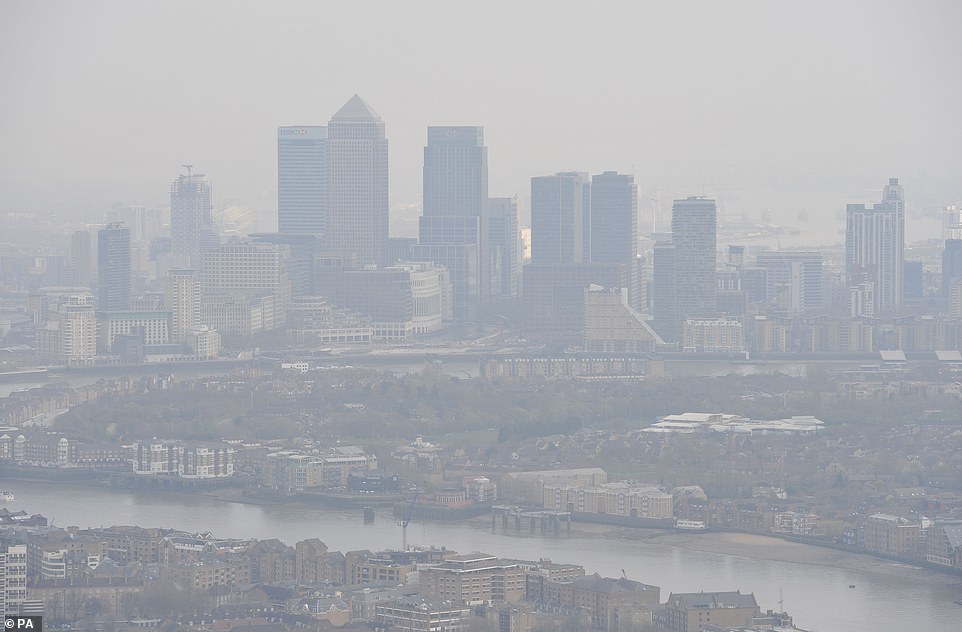 Unsurprisingly, cities across the UK have some of the highest levels of air pollution. Pictured: smog over London’s Canary Wharf

These suggest keeping an average concentration of PM2.5 under 10 micrograms per cubic metre of air (µg/m3), to prevent increased deaths.

Rosamund Kissi-Debrah, Ella’s mother, said: ‘This data shows yet again that the government is failing the British public.

‘Now people can really see the filthy air they’re breathing at their home, school or work address, and it is no wonder that the NHS waiting lists are ever growing.

‘Everyone needs to know what they’re breathing, and now with this new public service they can.’

Professor Sir Stephen Holgate, special advisor on air quality to the Royal College of Physicians, added: ‘Air pollution is an invisible killer, and because you can’t see it it’s easy for people to forget and ignore.

‘It’s essential that the public are given air pollution data for where they are thinking of buying or renting. In many cases like that of little Ella, it can be a matter of life or death.’ 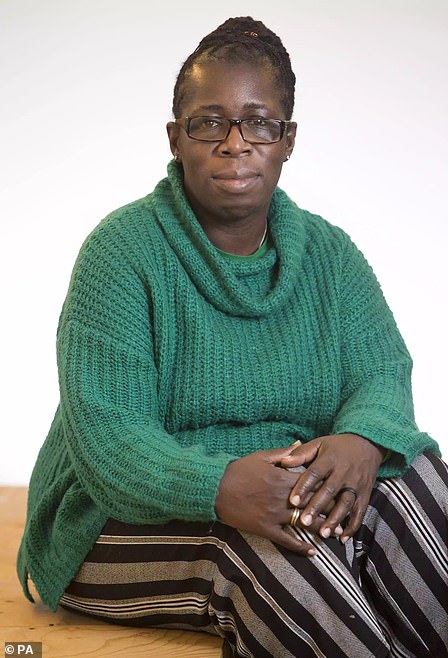 In June it was revealed that tougher air pollution laws would be brought in following the death of a girl from an asthma attack caused by traffic fumes.

A Southwark coroner ruled in December 2020 that air pollution – including illegal levels of nitrogen dioxide – contributed to the 2013 death of Ella Adoo-Kissi-Debrah, who lived 80ft from the South Circular road in Lewisham, south-east London.

The nine-year-old died after suffering three years of seizures and nearly 30 visits to hospital for treatment to breathing problems.

The council admitted pollution levels were a ‘public health emergency’ at the time of the schoolgirl’s death but it failed to act on it.

Coroner Philip Barlow said Ella’s mother, Rosamund, had not been given information which could have led to her take steps which might have prevented her daughter’s death.

On April 21, Mr Barlow said legally binding targets for particulate matter in line with World Health Organisation (WHO) guidelines would reduce the number of deaths from air pollution in the UK and urged the Government to take action.

The WHO guidelines suggest keeping an average concentration of PM2.5 under 10 micrograms per cubic metre of air (µg/m3), to prevent increased deaths.

The UK limit, based on European Union (EU) recommendations, is a yearly average of 25 µg/m3.

Ella’s bereft mother, who spent more than five years campaigning for justice, said she would have moved home if she had known polluted air was killing her daughter.

She said: ‘Because of a lack of information I did not take the steps to reduce Ella’s exposure to air pollution that might have saved her life.

‘I will always live with this regret.

‘People are dying from air pollution each year. Action needs to be taken now or more people will simply continue to die.’