A doting Prince Harry has grown to look to the Duchess of Sussex and her ‘natural social confidence’ to take the lead at royal engagements, a body language expert has suggested.

The Duke of Sussex, 35, and Meghan, 38, won the hearts of the nation on Monday as they greeted teenage girls in the township of Nyanga, South Africa, during the first day of their 10-day royal tour.

The rousing display saw Meghan address crowds of local women and girls supported by the community charity Justice Desk outside Nyanga Arts Centre – and also show off her flair for dance.

Body language expert Judi James has suggested that the visit not only displayed the duchess’s ‘authentic’ and ‘natural’ demeanour but also the ease with which the prince has grown to see his wife take the lead at their royal engagements.

Prince Harry and Meghan Markle greeted teenage girls in the township of Nyanga, South Africa, during the first day of their ten-day royal tour on Monday – during which Meghan ‘took the lead’ according to body language expert Judi James

She said: ‘The royals are famous for their rather awkward-looking body language when asked to join in the more fun, spontaneous moments on world tours and all the royal princes are known for performing their own style of dad-dancing that suggests a more introverted approach.

‘Even the less formal and stuffy Harry appears happier to draw on Meghan’s social and performer confidence and hugely natural approach here on the first day of their tour.

‘Meghan has always shown signs of being a very immersive royal, looking genuinely keen and interested in all the people she meets, responding in a way that looks authentic and natural.

‘As they walk up to the dancers here, Meghan and Harry are holding hands but it’s Meghan who drops the clasp to join in the clapping.

‘The way Harry places a hand on her back suggests he’s very comfortable urging her to take the lead and delight the crowds. 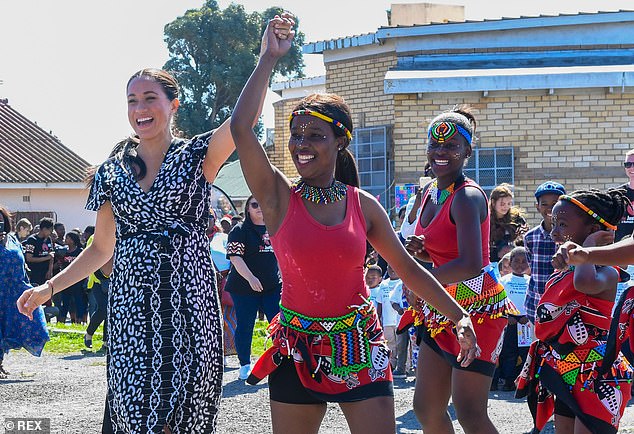 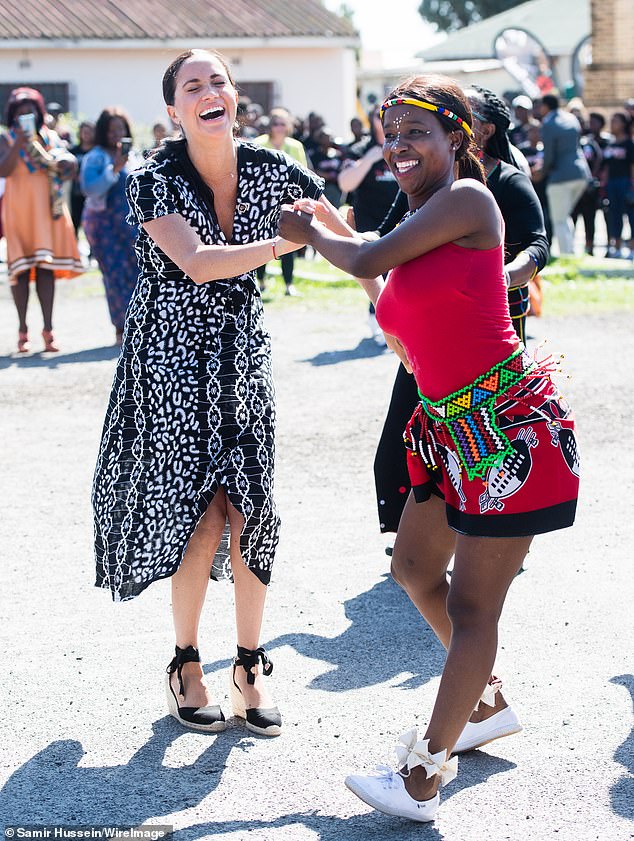 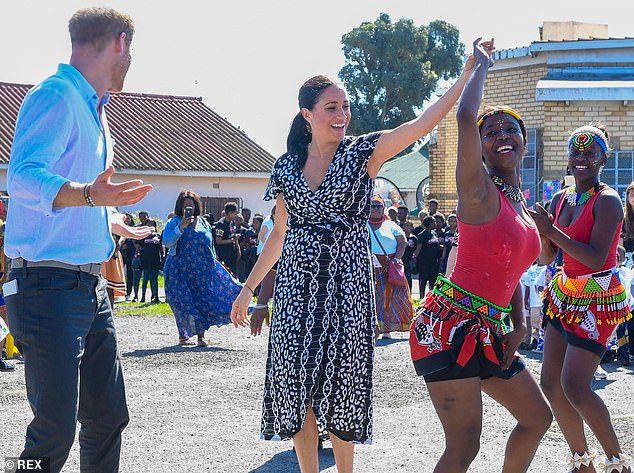 ‘Harry’s eye-checking endorses this “lead” role and although he offers the affectionate tie-sign of a back-rub, it’s Meghan who stands happily poised to join in the dancing.’

She added that, as is ‘usual’ on all their royal visits so far, it was Meghan who looked more than happy to spend longer with the crowds here.

‘Finally it’s Harry who seems to walk off, offering her a good-natured wave to move on,’ Judi said.

During their visit, Meghan was seen dancing hand-in-hand with a local dancer as husband Harry looked on with delight.

The royal visit, which saw Harry and Meghan make their first stop in the Nyanga township in the Cape Flats, where one in 206 people are killed each year, comes more than four months after the Duchess of Sussex gave birth to the couple’s son Archie Harrison Mountbatten-Windsor.

Addressing the crowds of young girls and women in the township, Meghan, who donned a black and white wrap dress designed by the Malawi-based fashion brand Mayamiko, said she felt ‘humbled’ to be stood alongside the community. 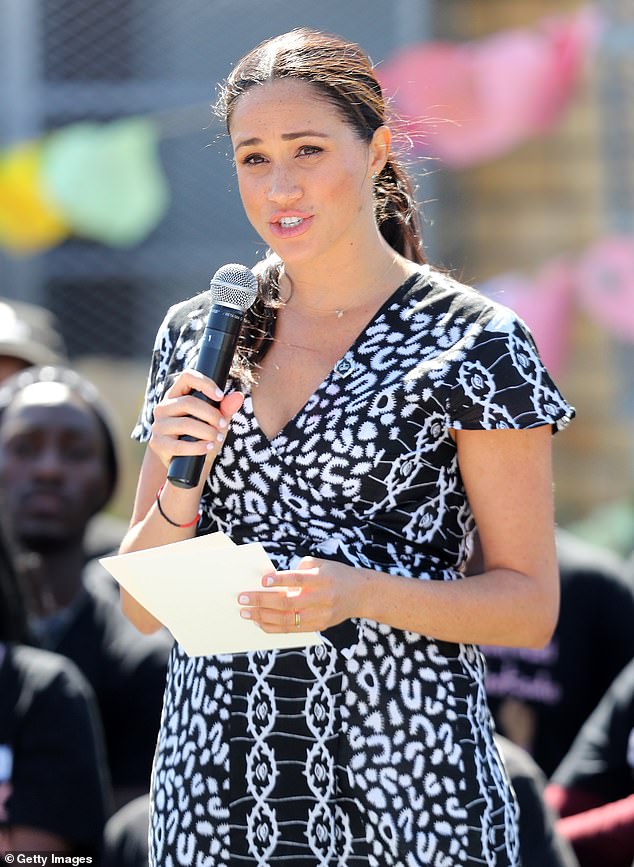 Meghan, who donned a black and white wrap dress designed by the Malawi-based fashion brand Mayamiko, said she felt ‘humbled’ to be stood alongside the community 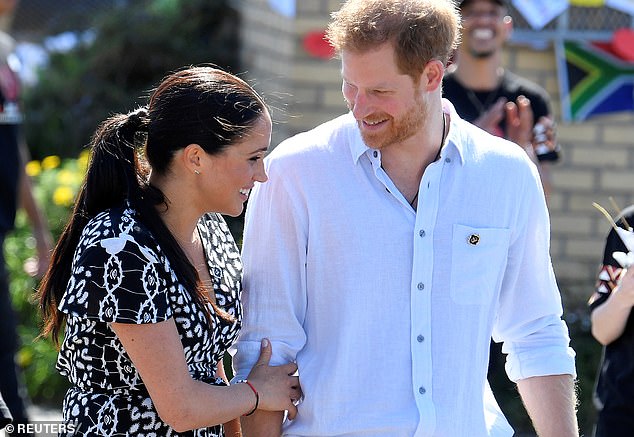 The royal visit saw the couple make their first stop in Nyanga, where one in 206 people are killed each year

Quoting the poet and civil rights activist Maya Angelou, Meghan continued: ‘Each time a woman stands up for herself, without knowing it, possibly without claiming it, she stands up for all women.

‘Now I know it’s not easy and I know it must feel insurmountable at times, but your commitment to what is right gives all of us hope, especially your brothers and sisters here in your community who need you to continue to shine your light brightly.

‘Your commitment is inspiring, it is energising and it is extraordinary. You must keep going, you must know that what you’re doing not only matters, it is vital because YOU are vital.’ 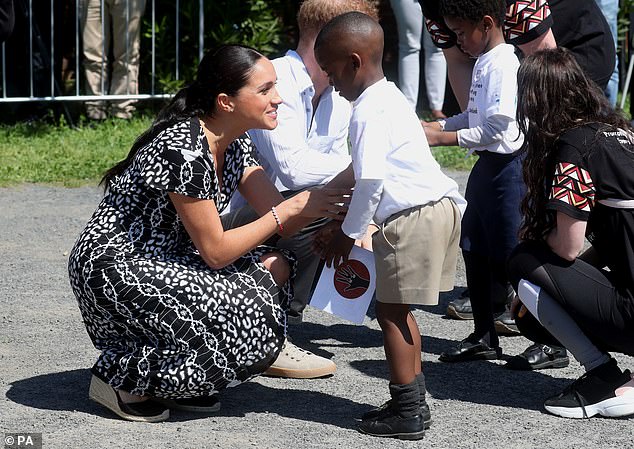 The Duchess of Sussex told crowds in the township that she stood with them ‘as a mother, as a wife, as a woman, as a woman of colour and as your sister’