How Prino Bargain Hunter app could slash your grocery, clothing and electronics bill in half

REVEALED: The free app you need to slash your grocery bill in half – and it can save up to 85 percent on designer shoes, clothing and home decor

Australians can save huge amounts of money on groceries, clothing and electronics by downloading a free app that identifies the best daily deals at 56 of Australia’s most popular stores including Woolworths, Kmart and Bunnings.

Launched in January, Prino Bargain Hunter hunts for lucrative discounts to help you slash your spending on everything from food and phones to makeup and household essentials.

Online and in-store discounts of up to 85 percent are uploaded daily on the Apple and Android compatible app for leading retailers like Sephora, BWS, Cotton On, Chemist Warehouse and JB Hi-Fi.

Prino developer Viet Bui, from Melbourne, posted a selection of this week’s standout bargains in a budgeting group on Facebook to thank people for downloading the app, which he created to help Australians shop at the lowest price possible. 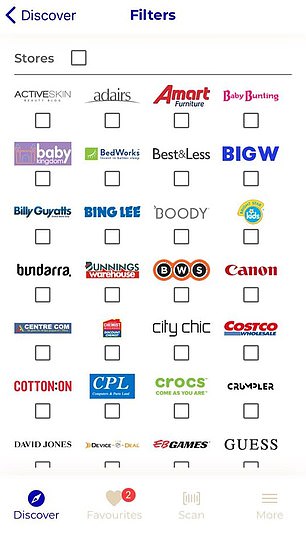 Where Prino hunts for bargains

‘Especially during this difficult time any saving, even a little, could make a difference,’ he said.

Woolworths shoppers can make savings of 50 percent on dozens of items this week, with Chobani Greek Yoghurt down from $2.25 to $1.12 a pot and own brand meat thermometers down from $18 to $9.

Massive reductions are on offer on fashion and homeware at David Jones, with Country Road sofa cushions down from $29.95 to $9.95 and Chiara Ferragni heels down from $449 to $169.

The app discovered two pairs of Stuart Weitzman shoes reduced from $695 to just $99 on Sunday – that’s a saving of more than 85 percent.

There’s plenty of deals on beauty and skincare, with Tarte single eyeshadows down from $21 to $10.50 and Kat Von D vegan lipstick down from $30 to $15 at Sephora, as well as cosmetics bags down from $28 to $14 at Inglot.

Prino also picked up half price savings on women’s running shoes from Under Armour which are currently reduced from $160 to $80. 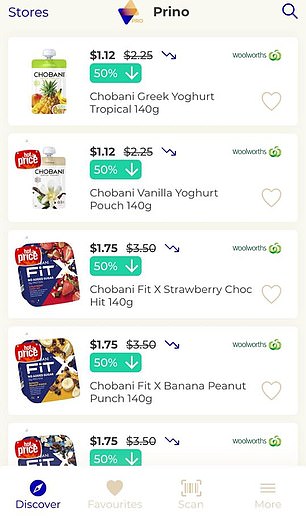 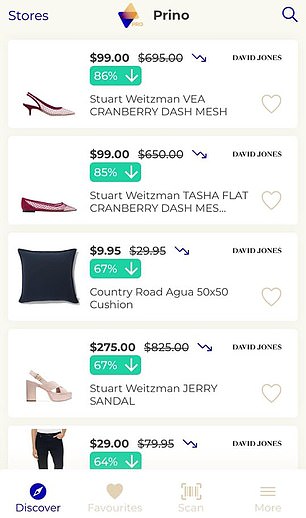 How to score a discount on every shop at Woolworths

Melbourne YouTuber ‘Love Happy Ali’ recently revealed how she shaves five percent off her online grocery bill by paying with a voucher instead of a bank card at the checkout.

Woolworths gift cards are available from the Cash Rewards website, which offers a discount on every voucher purchased.

Consumers are already swearing by the app just three months since it launched, with one woman saying it’s allowed her to decorate her home and spend money on gifts for her family that were previously unattainable because of costly medical bills.

‘Such a great app and so helpful,’ she said in a review on Apple’s App Store.

‘We’ve always had lots of medical costs and everything else has been put on the back burner, but thanks to this we can find things we need that are affordable!

‘It’s really easy to use, even for someone with dyslexia. Can’t wait to keep using it for my future purchases.’

Prino can be downloaded for free from the Apple or Google Play stores on Apple or Android devices.