How Rory, 4, escaped a life on dialysis thanks to a transplant from his own father

There is a very special bond between four-year-old Rory and his father, Stuart Blair. When little Rory lay in hospital needing a transplant, Stuart, 40, stepped forward to donate his own kidney to save his son.

The transplant, which took place in October last year, was a success and now Rory is enjoying life at home in Buxton, Derbyshire, with his mother Lisa, 36, and brothers Ewan, seven, and Alex, three.

But unfortunately, many others miss out on the donor kidney they need.

The latest figures from NHS Blood and Transplant show 6,097 people are waiting for a transplant in the UK — 4,803 for a kidney. Every year hundreds die waiting for a donor organ.

Stuart, 40, stepped forward to donate his own kidney to save his son Rory, four, from a life of dialysis

Living donations, where a living person donates an organ to another, can help tackle the shortage — and more than 700 donors a year for the past two years have been living donors.

John Fisher, chairman of the charity Transplant and Beyond, explains: ‘The main advantage of live donation is drastically cutting waiting times.’

A third of kidneys are given by live donors because most healthy people can survive with just one.

‘[Part of] the liver can also be donated as a live donation because of its capacity to regenerate,’ says John Fisher.

‘Some people feel live donation is putting someone through major surgery who is perfectly well, and putting them at risk, but it is a way of saving someone’s life. For patients needing a kidney transplant, it’s a horrendous life on dialysis. It’s no life at all — they have no energy, and spend much of their time in hospital,’ he says. 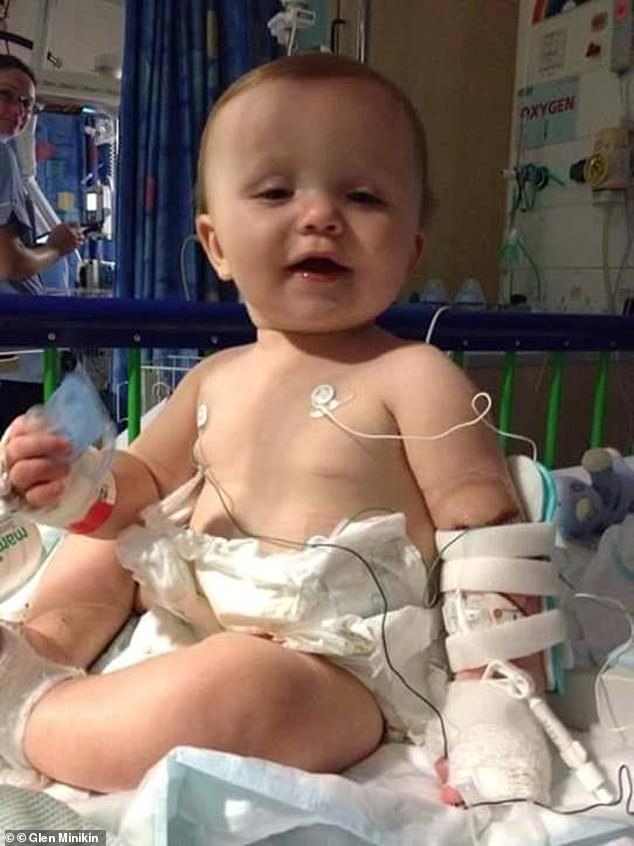 The transplant, which took place in October last year, was a success and now Rory is enjoying life at home in Buxton, Derbyshire

Lisa was 20 weeks pregnant with Rory when the doctors said there was a blockage in his urethra — the tube from the bladder that removes urine from the body — causing his kidneys to become enlarged.

‘We went for a scan and the sonographer said that she could see something wrong,’ says Lisa.

‘At a more detailed scan a few days later, he was diagnosed with posterior urethral valves (PUV), a blockage in the urine flow through the urethra caused by a faulty valve.’ It develops in the womb and affects approximately one in 5,000 to 8,000 newborn boys.

The blockage meant that instead of passing down out of his body, urine was pushed back up into Rory’s kidneys, making them swell and causing damage.

The valve can be removed once the baby is born, but his parents were told that at some point Rory would also need a transplant.

‘It was devastating — we didn’t know what the future would hold for him,’ says Lisa.

‘Doctors said they would monitor him until birth, and there was nothing else they could do.’

Rory was born weighing 7lb 6oz and operated on at five days old. The misshapen valve was cut away and excess fluid removed. 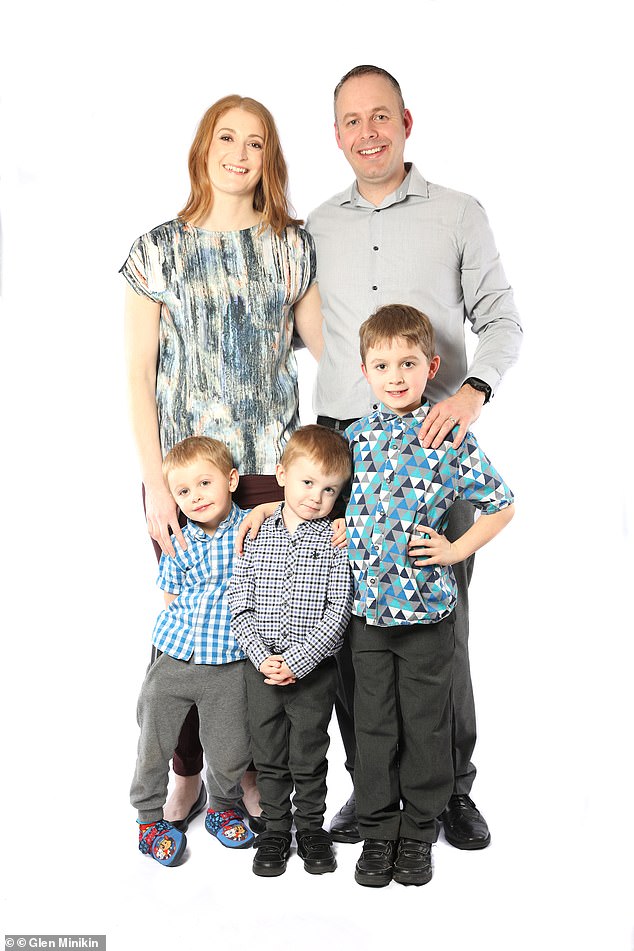 Lisa and Stuart Blair and four year old son Rory who has recently had a kidney transplant from his father. He is pictured here with brothers Alec, three and Ewan, seven

‘It was so stressful seeing him wheeled down to the operating theatre,’ recalls Lisa. ‘It wasn’t expected to be a cure — just a temporary fix until he had a transplant — and they put him on medication to improve his renal function.’

Afterwards, Rory suffered frequent urine infections so he had another operation to allow his kidneys to drain freely instead of going into his bladder.

The surgeons fixed two stomas — one for each kidney — on each side of his tummy, through which the urine could drain into bags.

For the next two years he seemed happy and healthy, if a little behind other babies his age.

But just before his fourth birthday, monitoring showed Rory’s kidney function was dropping and the day after his birthday he started dialysis three times a week. It was a shock, as he’d seemed well.

‘It was very stressful. We had one child at school, one at nursery and one at the hospital,’ says Lisa. ‘Luckily we had lots of help and support from family.

‘We were told that he’d have to be on dialysis until he could have a kidney transplant. The body can’t stay on dialysis indefinitely. 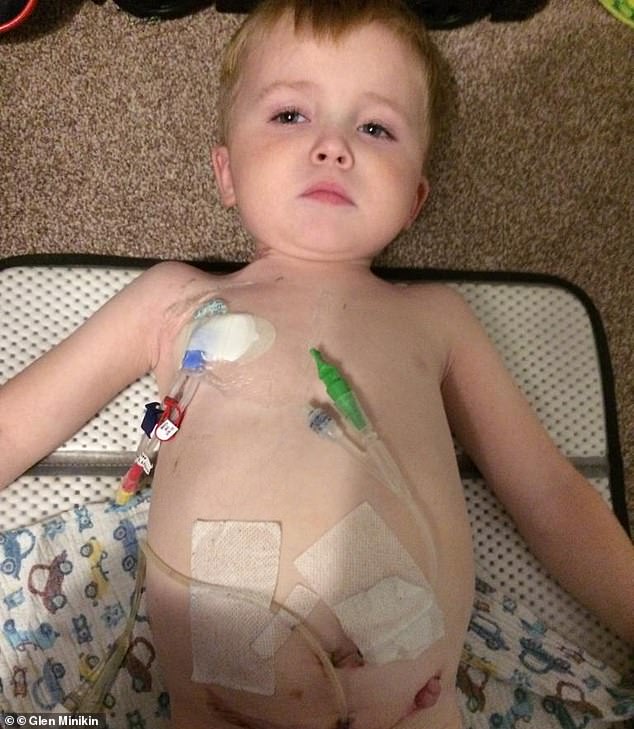 ‘Months before, tests had shown that Stuart was a good enough donor match. He never hesitated.’

Stuart, who works in pastoral care at a local school, says: ‘I wasn’t worried about having such a big operation — my only concern was to be fit and healthy so I could be a good father to all my sons.

‘Both Lisa and I were a match, but I was a slightly stronger match, so there was less chance of Rory’s body rejecting the organ.

‘I wanted to help Rory get on with his life.’

Doctors carry out urodynamics tests before any kidney transplant, to check the volume that the bladder can hold. Rory’s bladder was too small to cope with the volumes produced by an adult kidney, so before the operation his bladder had to be stretched.

‘About seven months before the transplant, doctors put a catheter in to his bladder through his tummy, and we had to push fluid into it three or four times a day, gradually increasing the amount, to stretch it.

As it was a painful process for him it was emotional seeing him go through it,’ adds Lisa. Rory went into hospital the day before the transplant and Stuart went in the following morning.

‘The day of the operation was nerve-racking as I had both my husband and son in the operating theatre, but thankfully it went well,’ says Lisa.

The operation took six hours. Stuart was allowed home after four days in hospital. ‘I was tired and sore to start with but I just got stronger every day,’ he says.

‘The hardest part was me being allowed home when Rory was still in hospital. We have always had a special bond, but it does feel even more special now,’ he says.

Rory was in hospital for three weeks, due to an infection. Next month he will go back to have his left kidney removed, as it isn’t functioning and is at risk of cancer because of the damage to it.

‘Now that he has Stuart’s kidney and he’s living life to the full, we feel finally that we can start to put it all behind us,’ says his mother.

‘He’s doing fantastically well even though he picks up colds and infections more easily than most children, he has lots more energy.’

John Fisher adds: ‘I would like to see more live donors — especially in kidney donors over 50.

‘With younger donors there is a potential that they develop a problem, not related to the transplant, with their remaining kidney over the years, but in a donor over 50 that is less likely to happen because such problems usually take a long time to develop.’

The Blair family hope their story will encourage others: ‘We would urge people to become live donors. You really can change a life.’