How Rylan Clark-Neal stopped trying to please everyone

‘Lots of people say I only get work on telly because I’m gay,’ says Rylan Clark-Neal as he waits for his taxi-driver brother to take him back home to Essex after a typically hectic stint presenting the BBC’s Strictly Come Dancing: It Takes Two.

‘They think I’m a gay box-tick but I couldn’t care less.’ He leans forward and says: ‘I know the real reason. It’s because I’m always easy, I’m always prepared and I don’t cost much. They won’t be printing my salary in the papers when the BBC releases presenters’ wages, because I won’t even make the top 100 list. My salary is down there with the minions.’

Rylan Clark-Neal is the unexpected survivor of a ‘traumatic’ start to fame on ITV’s The X Factor, where he reached the quarter-finals in 2012

I laugh. He leans back satisfied because, from the age of 13, he has learnt that the most effective form of defence is attack, coupled with a dash of humour. Back in September 2001, after a transformative summer when he’d turned from chubby, shy ginger kid into a tall, slim boy with blond highlights, he’d come back to school and was immediately confronted by a sixth-form bully.

‘I squared up to him and started asking him why was he always following me. I said: “Listen mate, if you’re that obsessed, get it over with and ask me out on a date.” All his friends started laughing. He never came near me again.’

Rylan is the unexpected survivor of a ‘traumatic’ start to fame on ITV’s The X Factor, where he reached the quarter-finals in 2012. Now 31, he has become one of the most popular faces on TV and has gone from appearing in reality shows – he won Celebrity Big Brother in 2013 – to hosting slots on This Morning and The One Show to fronting Ready Steady Cook and Supermarket Sweep. The BBC’s decision to have Rylan co-host It Takes Two with Zoë Ball is, in broadcasting terms, confirmation that Middle England has taken him to its heart.

Does he recognise the job as a seal of approval? ‘No. I see this as a two fingers up to the Rylan who appeared on The X Factor and everything that happened. Success is the best form of revenge. I was the joke and now I’m in this position. The tables have turned.’ 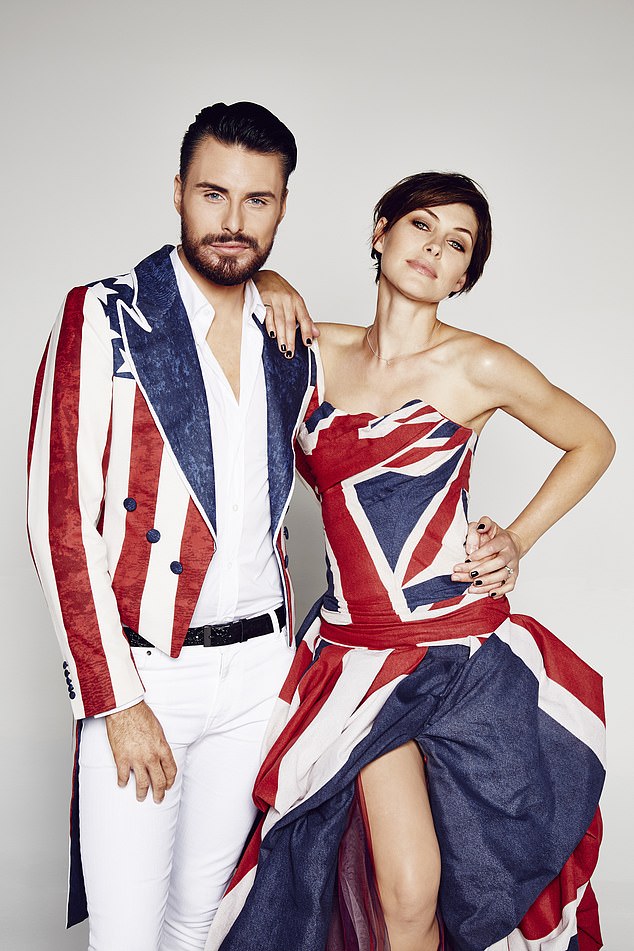 Rylan with his Celebrity Big Brother co-host Emma Willis in 2015. ‘I stopped trying to please everyone, I decided I would just be a joke and get through the show on my personality. I completely acted up to the image. It worked’

We are sitting in his hotel suite after It Takes Two. It’s late on Friday. Not a lock of his hair is out of place, his eyebrows are perfectly groomed and the teeth that he spent his first £25,000 pay cheque on are still brilliant white, but Rylan is without doubt a changed man. Look beyond the carefully constructed image and you see the intelligent and sensitive man beneath. It was this aspect of him that was picked up by Grayson Perry, who chose him as a study for a National Portrait Gallery commission on the subject of identity. ‘Please underestimate me,’ says Rylan. ‘I like to be underestimated. It makes life much easier.’

Rylan grew up in a council house with his grandmother, Rose, who died in 2014. His mother, Linda, 67, suffers from severe Crohn’s disease and his father was absent. Top of the class at school, he was a shy boy whose escape was TV and music. Once he hit his teens, his dream was to become a star. ‘I was one of those kids you get warned about who just want to be famous,’ he says. ‘I thought being famous was everything. It really used to confuse me when I read about celebrities who overdosed and died. I couldn’t get my head around that.’

He tried his hand at everything – modelling, acting, singing in a boy band – before getting his 15 minutes of fame on The X Factor, changing his name from Ross to Rylan. Despite a comically bad audition, he was put through by the judges on the basis of his witty repartee. Judge Rita Ora pleaded with him to get singing lessons, but when he was saved from elimination by Louis Walsh, a furious Gary Barlow stormed off the show. The public backlash, he says, was off the scale.

‘I was hated. Completely hated,’ he says. ‘At the time, the whole Jimmy Savile story was in the news but either he was on the front pages of the papers or I was, and there were times I think I was more reviled than him. I got death threats. I was in pieces because I was scared and my family were devastated.’

I ask whether he sought help from a psychiatrist or felt suicidal. ‘No. Something changed. I saw the whole picture so much more clearly. I stopped trying to please everyone, I decided I would just be a joke and get through the show on my personality. I completely acted up to the image. It worked. It made me a different person. So many people were vile to me – including a lot of celebrities who come up to me now and tell me I’m doing so well.’

In 2013 Rylan met former Operation Yewtree police officer Dan Neal and they married two years later. He says he works too hard – seven days a week – to fit much else into his life. ‘I haven’t been out to a party for five years. ‘If I’m not working I sit at home in a tracksuit and watch Keeping Up Appearances and Birds Of A Feather back to back.’

To the suggestion that he needs a holiday, he shakes his head. It’s obvious from watching him revving up the Strictly crowd, wisecracking with the stars, playing up to the cameras and standing patiently afterwards taking selfies and signing autographs that he’s getting the work because he’s very good at it.

‘Strictly Come Dancing: It Takes Two’ is on weekdays at 6.30pm on BBC2

Insider secrets from the hit show

How to get a plum seat in the studio audience

More than five million fans apply for tickets to the live shows on the George Lucas stage in Elstree, Hertfordshire. But having a ticket does not guarantee entry. Excess tickets are allocated (to ensure a full house) but only 750 audience members will be given a seat – on a first come, first served basis. Die-hard fans sleep out overnight hoping to bag one of the exclusive spots behind Tess Daly. 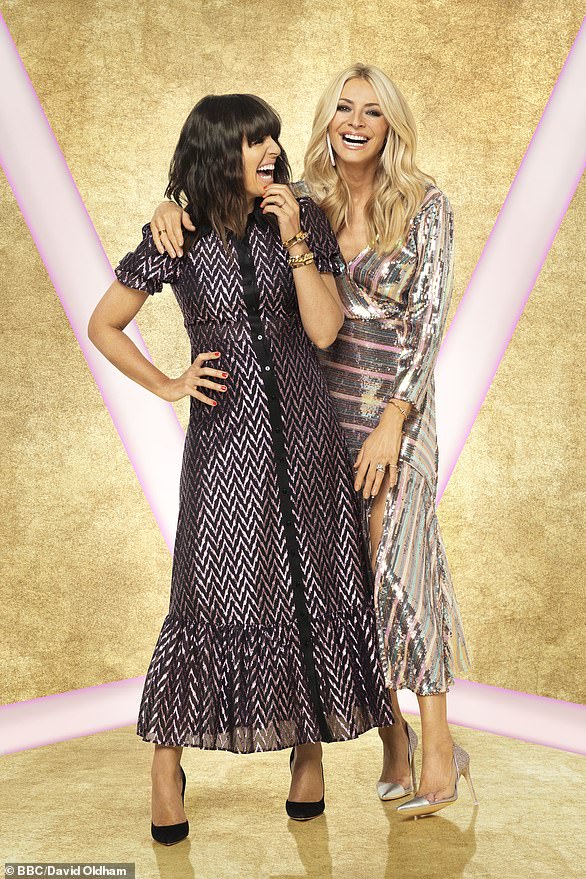 On screen she is the epitome of grace and calm but Tess Daly (above, with co-host Claudia Winkleman) will run the equivalent of a marathon in heels each series, racing between contestants and judge

Once inside, audience members are asked to hand over their mobiles (which is why you don’t see candid snaps on social media) then squeezed into the iconic Strictly chairs, which are notoriously tiny and uncomfortable. Be warned, filming can take up to seven hours, trips to the loo are discouraged and can only be taken between filming breaks. Apart from a chocolate Freddo and juice box left on each seat, food cannot be consumed, so anyone who hasn’t eaten in advance is in trouble. Just when you are getting desperate, however, mini packets of Haribo sweets are thrown into the crowd by the show’s veteran warm-up man Stuart Holdham.

Ever wondered what happens to all the confetti and glitter that rains down throughout the dance routines? Strictly employs secret sweepers who glide onto the floor with vacuum cleaners, giant brushes and leaf-blowers – often while the dancing couple are finishing their final flourishes.

On screen she is the epitome of grace and calm but Tess Daly (above, with co-host Claudia Winkleman) will run the equivalent of a marathon in heels each series, racing between contestants and judges. Daly favours a mid-high heel from Gina, with a spare in case of breakages.

Stylists race through 540 giant cans of hairspray, keeping the judges and dancers coiffeured to perfection, while over 800 pairs of fake eyelashes are used every series.