How should Tesco Clubcard shoppers use their points from January?

With England’s second lockdown and accompanying restrictions on international coming to an end, and a coronavirus vaccine in sight, it’s safe to say for many, holidays could be back on the cards for 2021.

Almost certainly among those considering trips are holders of thousands of airline miles, who have either had to sit on their points this year or convert them into beer and wine.

But frequent flyers should be aware that some of the most well-known airline loyalty schemes have had several shake-ups recently, with British Airways and Tesco Clubcard parting ways next month and Virgin Atlantic trying to grab supermarket shoppers with a sign-up bonus.

This is Money breaks down what consumers need to know about the changes, and what the best next steps might be.

British Airways is parting ways with Tesco Clubcard next month, meaning shoppers will no longer be able to swap their groceries for getaways

What is happening with Tesco Clubcard?

Tesco’s Clubcard loyalty scheme lets supermarket shoppers earn one point per £1 spent in its stores, while holders of Tesco Bank credit cards earn an extra point for every £4 spent in Tesco an every £8 spent elsewhere.

These points are converted into vouchers, which can be swapped for discounts at Tesco or elsewhere.

Most notably for travellers, Clubcard points can be converted into Avios points, the reward currency of British Airways, allowing customers to turn their groceries into getaways.

This conversion rate is 2.4 Avios per Clubcard point, with holders able to convert £2.50 worth of Clubcard vouchers into 600 Avios points.

They can also be converted into Virgin Atlantic Flying Club miles, which have been recently renamed as Virgin Points, at a slightly better rate of 2.5 miles per point. Shoppers can swap £2.50 worth of vouchers for 625 Virgin Points.

However, British Airways and Tesco are parting ways next month, meaning frequent flyers only have one option available to them.

After 18 January 2021, Tesco shoppers will no longer be able to convert Clubcard points into Avios points.

Those who automatically have their Clubcard points converted this way every quarter saw that end on 22 October, the last statement date before the end of the partnership, although any Clubcard points earned from 23 October onwards can be manually converted into Avios up until 18 January.

Meanwhile those who make a conversion and see their points get lost in transit must raise a complaint by the end of March 2021. 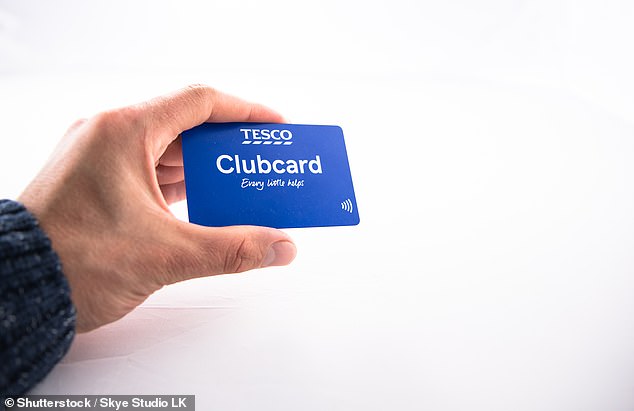 Tesco Clubcard points can be earned through Tesco shopping and can be converted into air miles, hotel vouchers or train tickets, among other things

Should I convert my points now?

With just over a month to go until the change, ‘there is a big and immediate decision to make for those with a big stash of Tesco Clubcard points’, Nicky Kelvin, from the frequent flyer website The Points Guy UK, said.

‘If you are a loyal Avios collector, and aiming towards a redemption using Avios, you probably will want to transfer your remaining Tesco hoard to your BA Executive Club account now.’

Rob Burgess, editor of Head for Points, added that 2.4 Avios per Clubcard point was ‘a strong exchange rate’.

This is Money has previously written about how flyers can maximise their Avios points and achieve the conversion rate of 1p per point, which is what experts recommend they aim for.

Once transferred, Avios points expire after 36 months of inactivity, but this would require someone to not spend or earn any points over a three year period, which is unlikely considering points can be earned through everyday credit card spending.

As hinted at above, BA and Tesco parting ways leaves Virgin Atlantic as the sole airline partner of the Clubcard scheme.

Perhaps in a bid to lure new customers over to its new reward scheme, it is offering a sign-up bonus to those who choose to automatically convert their Clubcard points to Virgin.

Last week it launched the welcome bonus, with those who sign-up to the conversion every quarter netting 2,000 points up front, as well as the standard conversion of 2.5 Virgin Points per Clubcard point.

‘We value Virgin Points slightly higher than Avios – 1.1p vs 1.4p per point – so the Virgin option was always providing slight better value. This also means we value the auto convert bonus at £28, which is a great offer,’ says Nicky. 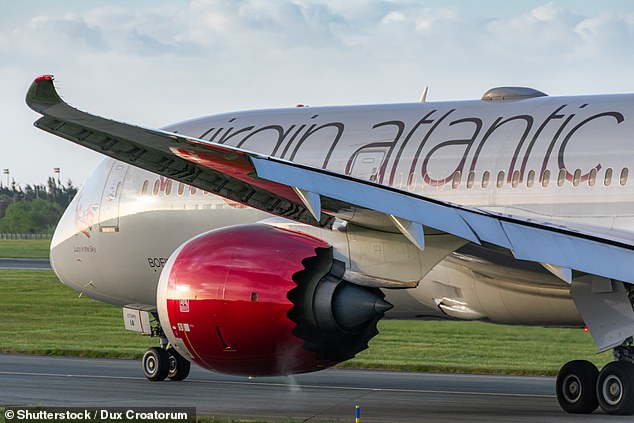 Virgin Atlantic secured a £1.2bn lifeline earlier this year to help it stay in business

The deal is open to new and existing members of Virgin Atlantic Flying Club, while those who choose to auto-exchange their points for three statements, or 12 months in total, will be entered into a draw with a chance of winning one of 15 prizes of 40,000 Virgin Points.

However, Burgess warned that while it was ‘worth activating this offer to bag the 2,000 bonus points’ if consumer collected Virgin Points as it is, they ‘should then turn it off again.’

He said: ‘Clubcard points last for three years before they expire and convert to Virgin within 48 hours when you need them.

‘It makes far more sense to keep them in Tesco in case Virgin launches a conversion bonus or a fantastic offer appears with a different Clubcard partner which is more valuable.’

Where can those points take me?

While The Points Guy’s calculations might value Virgin Points slightly more highly than Avios, the issue is that they can be slightly harder to redeem and realise that value, due to Virgin Atlantic’s smaller number of routes and long-haul focus, compared to British Airways.

However, Virgin Points can be used on Virgin’s partner airlines like KLM and Air France. 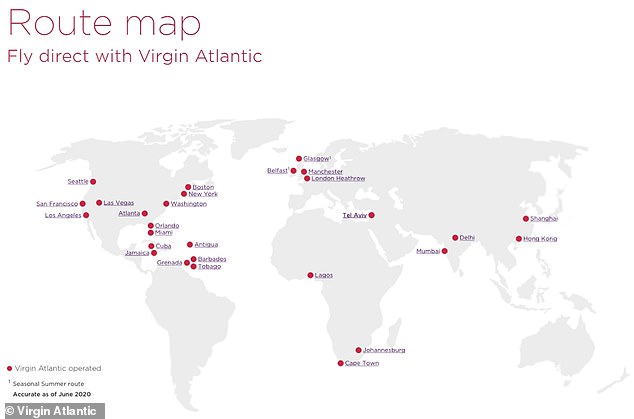 Virgin Atlantic offers a more limited set of destinations compared to British Airways, with a focus on long-haul flights

How many points travellers need depends on whether they are flying at peak or off-peak times, with the latter requiring fewer points.

The airline has a full list of destinations and roughly how many points they require, excluding taxes and charges, on its website, while we have also illustrated them below. 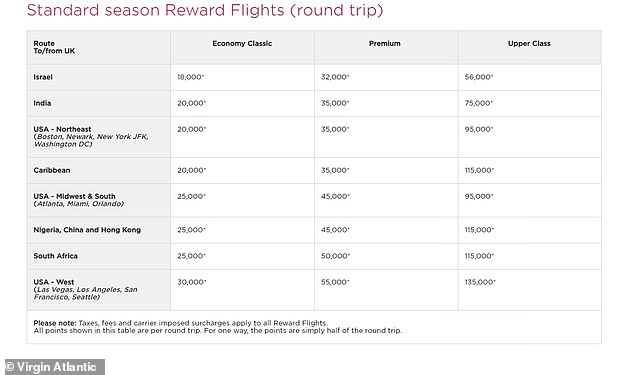 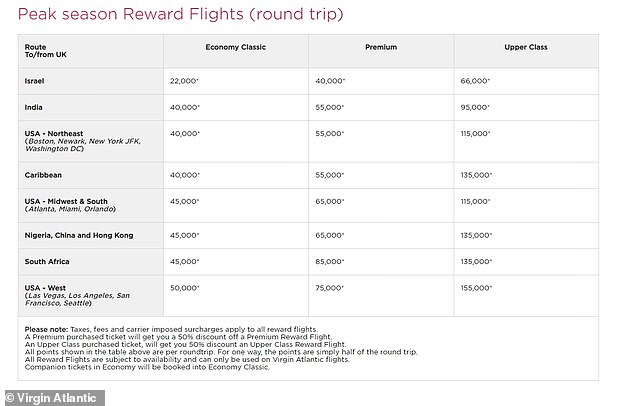 Holders of Virgin air miles can begin to redeem them on flights when they reach 18,000 points

Virgin Atlantic began flying again in July this year, and opened up more of its long-haul routes as the year progressed, even if international travel has been disrupted by quarantine requirements and England’s second lockdown.

But Burgess warned: ‘The problem with Virgin is that, in terms of free flights, you can only book long-haul routes because they don’t do short haul.

‘This means that you are unlikely to ever earn enough from Tesco Clubcard to get a free flight. It is a transfer best suited to someone who also earns miles by flying Virgin or who is using their credit card.’

Virgin Money offers its own points-earning credit cards, with both free and annual fee versions available, while American Express points earned through spending on its cards can be turned into Virgin Points at a rate of 1:1.

What other uses do Virgin Points have?

Are my points safe?

The future of the airline industry remains uncertain even as an end to the coronavirus pandemic appears in sight.

Airlines have shed thousands of jobs this year and Virgin Atlantic had to raise £1.2bilion earlier this year to stay in business.

While it is important to note it is now in a much more stable situation, some may still wonder about the safety of their points. Virgin Points are not actually held by the airline, but by Virgin Red, which is a separate company, previously known as Virgin Group Loyalty Company.

But this doesn’t necessarily mean Virgin Points would be safe if the airline was to go bust, something which it is important to stress is now a lot less likely than it was when the pandemic first upended the world earlier this year.

Rob said: ‘If the airline goes down, I doubt it has enough cash to support the outstanding miles in circulation.

‘Virgin is in better shape now and has enough cash to see it through the next few months whilst vaccinations happen.

‘A bigger problem is that it has a limited route network and you can’t be sure where it will be flying, or when you will be allowed into the places it flies to.’

Richard Branson’s Virgin empire has been in the process of revamping its reward scheme recently.

As well as the name change, Virgin Points now no longer expire, having used to do so after 36 months of inactivity like with Avios.

They are also being rolled into a wider reward scheme called Virgin Red, which is currently open only to a limited number of customers, although this will be expanded over the next year.

This reward scheme will encompass all of Virgin’s brands and will enable Virgin Points to be spent on a much wider range of things.

Previously, those who weren’t flying had a limited number of alternative options including wine and hotel stays, which we broke down earlier this year.

Aside from Virgin’s own brands, the points can be spent on things including theatre tickets, vinyl records and goods from Greggs, according to what we know so far.

Kelvin added: ‘Whilst Virgin Red brings in new options to earn and redeem points, the Flying Club programme remains unchanged, and from what we have seen so far, if you are looking to extract maximum value from your Virgin Points, redeeming on Virgin Atlantic or partner flights, especially in premium classes, will be the way the go.

‘We recently broke down the value from one of the new options, Greggs.

‘A Greggs sausage roll typically costs £1.75, so you’re not getting the greatest value.’ 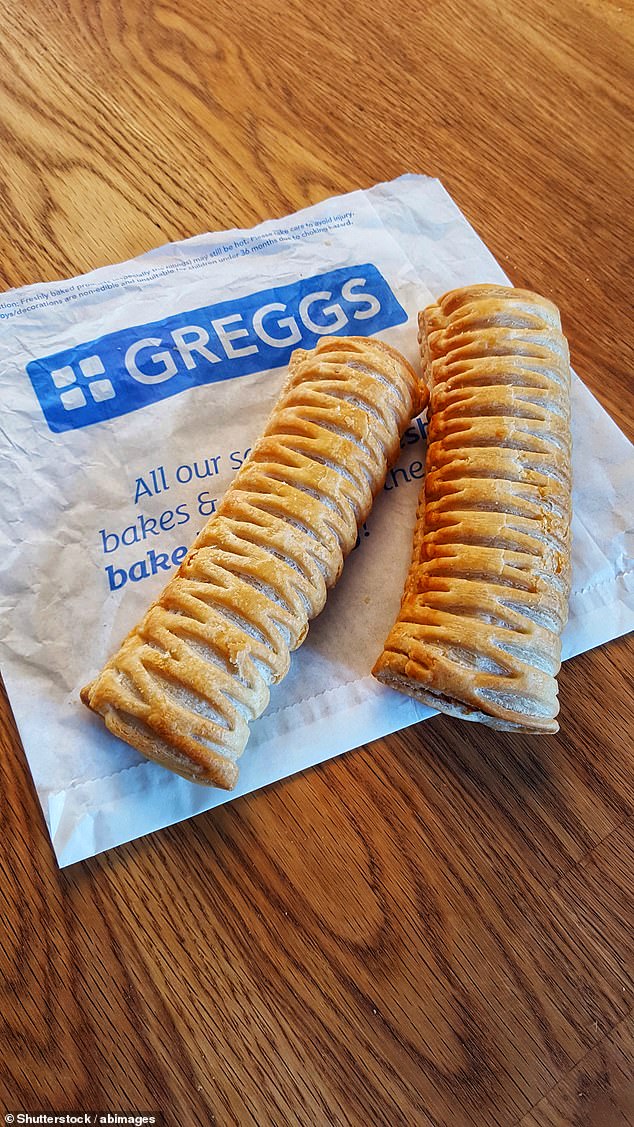 Virgin’s new reward scheme will let members trade their points for vouchers at the likes of Greggs, but swapping them for sausage rolls do not represent the best value

And what about Clubcard points?

For those with a pile of Clubcard points who don’t like the sound of either of the above air mile schemes, there are plenty of other options.

When it comes to travel rewards, Clubcard points can be converted into vouchers for the likes of Eurotunnel, Railcard, Hotels.com and Hilton, although only Hilton hotels in the UK and Ireland.

Most of these deals give a 3:1 return on Clubcard vouchers, for example, £5 in vouchers could be turned into £15 to spend at Hotels.com. 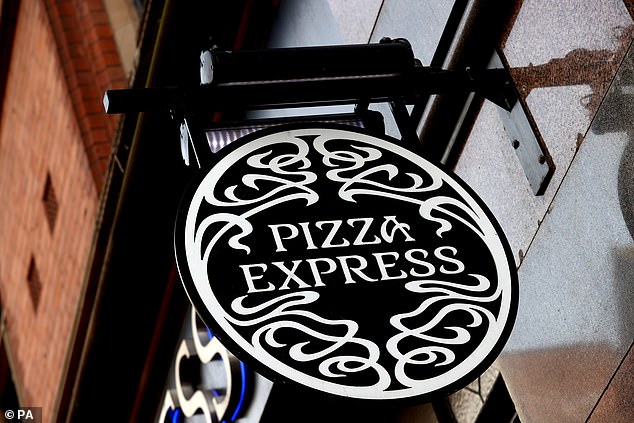 Burgess said Hotels.com was probably the most useful when it came to travel rewards, although stays booked this way are non-refundable.

Meanwhile, there are also vouchers available at partner restaurants and retailers including Pizza Express, Now TV and Goldsmiths, along with vouchers for magazine subscriptions.

Again, most offer a 3:1 return on Clubcard vouchers, although someone with a bigger pile of points may get less out of converting them all into Pizza Express vouchers compared to airline points.

‘The other Tesco partners available are not likely to provide better value than Virgin, but a lot will depend on personal circumstance’, Kelvin said.

‘You need to weigh up all the options available against what you actually want and need, and the value it will provide.’