Sicily is the triple distillation of Italy. The sun is fiercer, the wine stronger, the sweets sweeter, the shadows darker, the baroque more baroque. And, it has to be said, the dirt dirtier.

Every writer comments on the island’s severe contrasts: great beauty and the smell of jasmine here, bloodstains and brutal poverty there. The ancients reckoned the entrance to Hades was near Enna, the one-time Mafia stronghold in Sicily’s centre.

But I have always felt the island to be quite close to heaven. In these fretful days, perhaps as close as we can expect to be, providing a travel corridor to Italy opens soon.

Baroque brilliance: The Daily Mail’s Stephen Bayley visited the baroque cities of Noto and Ragusa (above) 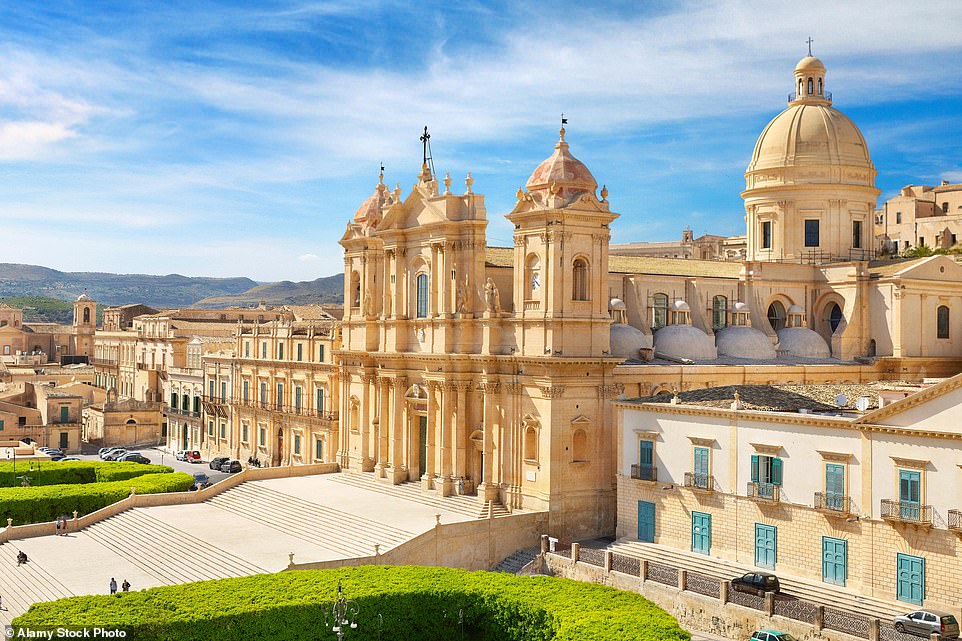 Spectacular: The Cathedral of San Nicolo stands on top of a monumental staircase in Noto’s old town

We flew in to the city of Catania, where our temperature was taken with lasers and frontier guards looked bored. We were headed to a rental house near the Punta delle Formiche in the far south, way below the coast of Tunis, but broke the journey at Siracusa. Here we visited the studio of Massimo Izzo on the island of Ortigia.

Izzo is Sicily’s amiable rock-star jeweller. To describe his style, you need a bigger word than ‘fantastic’: shocking hunks of aquamarine, diamonds and gold, and the mythical monster Medusa, inspire him. Izzo is on Piazza Archimede, named after the ‘Eureka!’ scholar. Sicily was once one of the Greek cities of Ancient Italy, closer in spirit to Athens than Rome.

A short walk away are Ortigia’s best restaurants: La Lisca for classic fish, and Fratelli Burgio, a roaring deli — or rather ‘ali’, meaning alimentari (food) — where platters of cured meat, cheese and smoked fish are manhandled through the crowds.

There’s also a great Caravaggio in the church of Santa Lucia alla Badia near by.

Our house, Casa delle Sirene — available through The Thinking Traveller — was another 35 miles south, in a settlement so small it doesn’t have a name on the map.

You (eventually) find it with a GPS pin — it’s down one of those typically Italian private roads with a temperamental electronic gate. 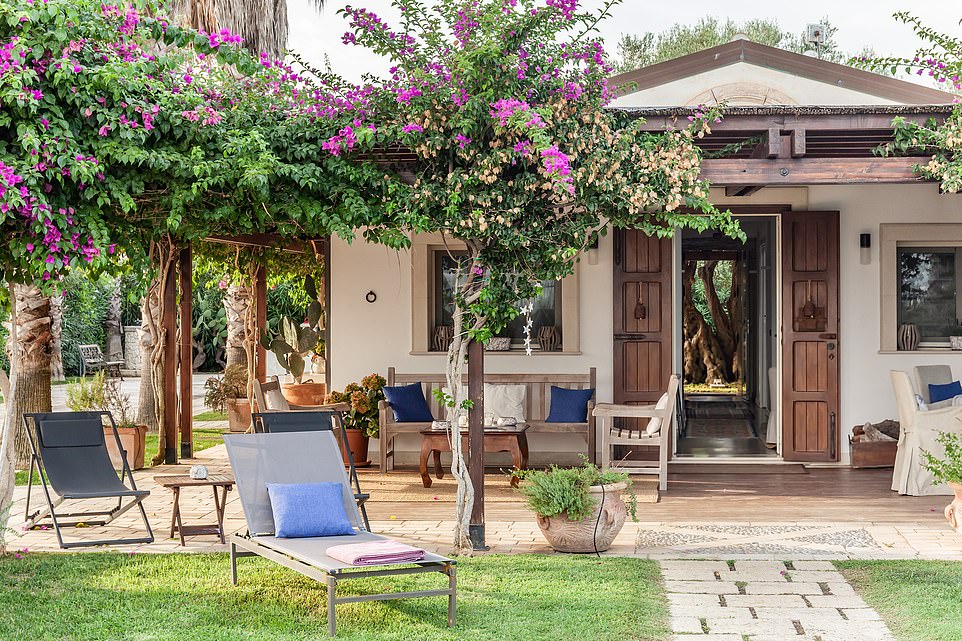 Casa delle Sirene is located in a settlement so small it doesn’t have a name on the map. Pictured is the lush tropical garden

Sirens lured sailors to their deaths with their hypnotically beautiful songs. This one lured us with its astonishing setting, just steps away from a deserted beach on the stretch of water known as the Canale di Malta. Valletta, Malta’s capital, is less than 90 miles away. You feel a long way from London.

The house was compact, modern and fully connected with wifi, satellite TV and a Bluetooth sound system, but we ignored these entirely, choosing to loll in the lush tropical garden and listen to crashing waves instead.

Foresight was required when it came to cooking, as Casa delle Sirene is nine miles from the nearest shop, and by the end of the season, the roadside produce trucks had disappeared. Still, we managed pesce spada (swordfish) with datterini tomatoes and capers; pasta with radicchio, cream and pancetta; barbecued orata, nasello and triglie (bream, hake and red mullet). 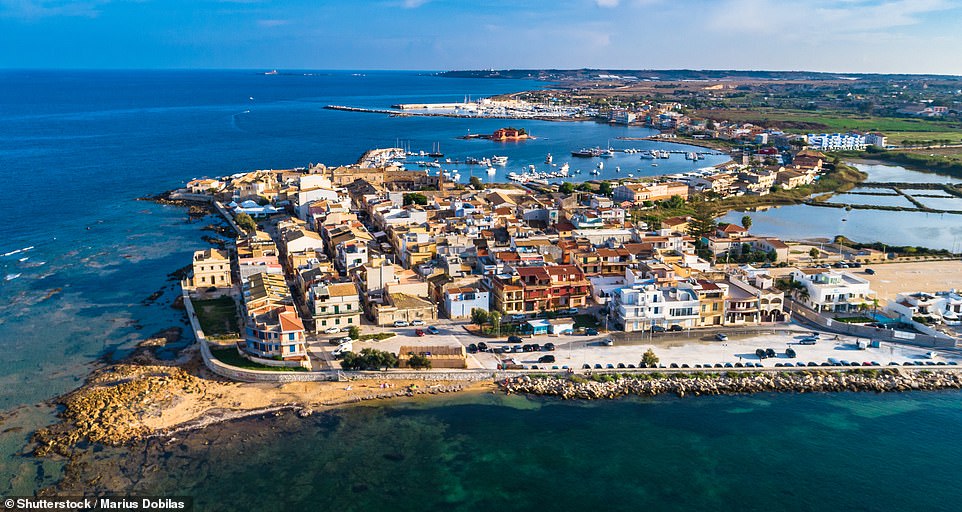 Marzamemi is a pretty seaside town where you’ll find a wonderful converted tonnara, or tuna factory

The Casa delle Sirene (sleeping four) is available via The Thinking Traveller (thethinkingtraveller.com, 020 7377 8518) from £2,424 per week. Wizz Air (wizzair.com) flies from London to Catania from £22 return.

I also bought lumache, or snails, which are a popular seasonal treat hereabouts. I cooked a kilo and then threw them away, being deterred by a label that warned me to be alert for dead ones. How do you identify a dead snail?

This is a poor area, hence snails, but poverty does not mean gaily dressed peasants crushing grapes with their feet, it means discoloured and shredded plastic polytunnels, garbage bags everywhere, broken roads with no signage and fields full of out-of-control maize.

The poverty and notorious crime are linked: there is an old saying ‘When the babies cry, we steal for them’. It is a harsh place, and even a little frightening, but it’s addictive. Without Google Maps to help, we’d still be there.

There are inspired diversions. The great baroque cities of Noto and Ragusa are an hour away, and the former has a brilliant cathedral. But on these roads, 60 minutes seem an eternity. This is Montalbano country, too: the brooding detective’s villa is at nearby Punta Secca, and you can rent rooms there. Just inland is Scicli, where Montalbano’s police HQ is based in the series, but the glorious, scorched, empty piazza seen on the telly is now cluttered with tables and chairs ignored by diners for health reasons.

A better excursion is to Marzamemi, the only pretty seaside town. Here you find Campisi, a wonderful converted tonnara, or tuna factory, selling every variety of tinned, bottled or vac-packed fish imaginable.

In 1953, Gavin Maxwell, later author of the otter saga Ring Of Bright Water, went to live in a tonnara on the other side of the island to get to know the people. He found himself both ‘horrified and fascinated’ by Sicily. I contemplated this at Campisi’s bar, overlooking the salt-marshes — like a pirate Norfolk.

But why ever leave such a perfect house? Sicilian dialect has no future tense , and in Sirene you can live in the moment, or dwell in the past. In Sicily, 1693 (when an earthquake devastated this area) seems like yesterday. And getting back to yesterday is exactly what we achieved.