The Concord supersonic airliner, which crashed in Paris 21 years ago, was preceded by a lesser known Soviet plane

It was a tragedy that made headlines around the world and marked the beginning of the end for Concorde, the world’s most famous supersonic passenger airliner. Air France Flight 4590 crashed during take-off on July 25, 2000, killing all 109 people on board. A little over three years later, the global Concorde fleet was retired. But whilst the ultra-fast plane remains a global icon, its Russian-built competitor, the Tupolev Tu-144, is far less well-known. 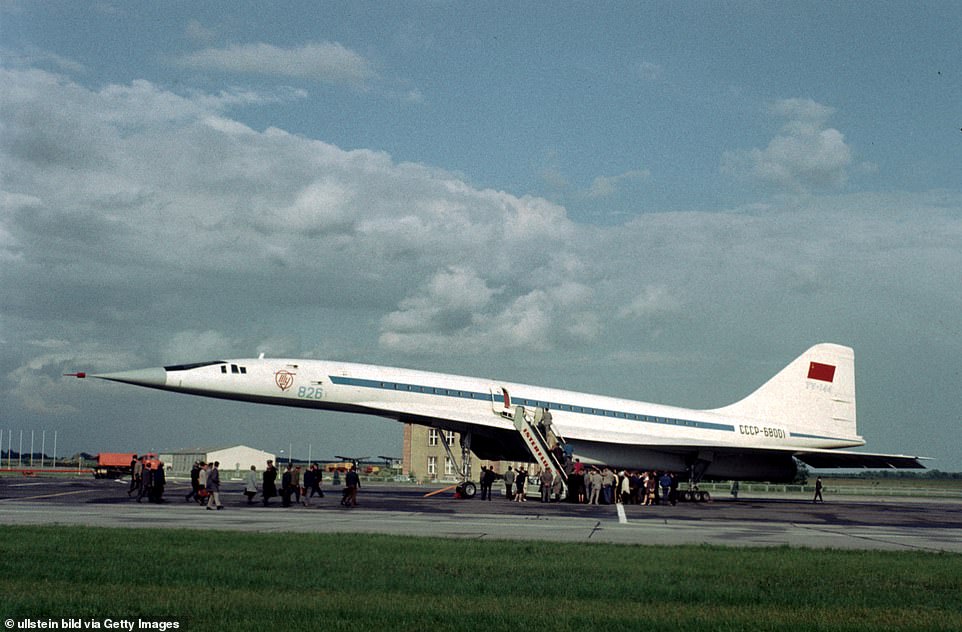 On December 31, 1968, three months before Concorde’s first test flight, the Tupolev Tu-144, which was dubbed the ‘Konkordski’ due to its resemblance to its Western competitor’, was unveiled by the Moscow-based Voronezh Aircraft Production Association. Above: The plane in Germany in 1971. 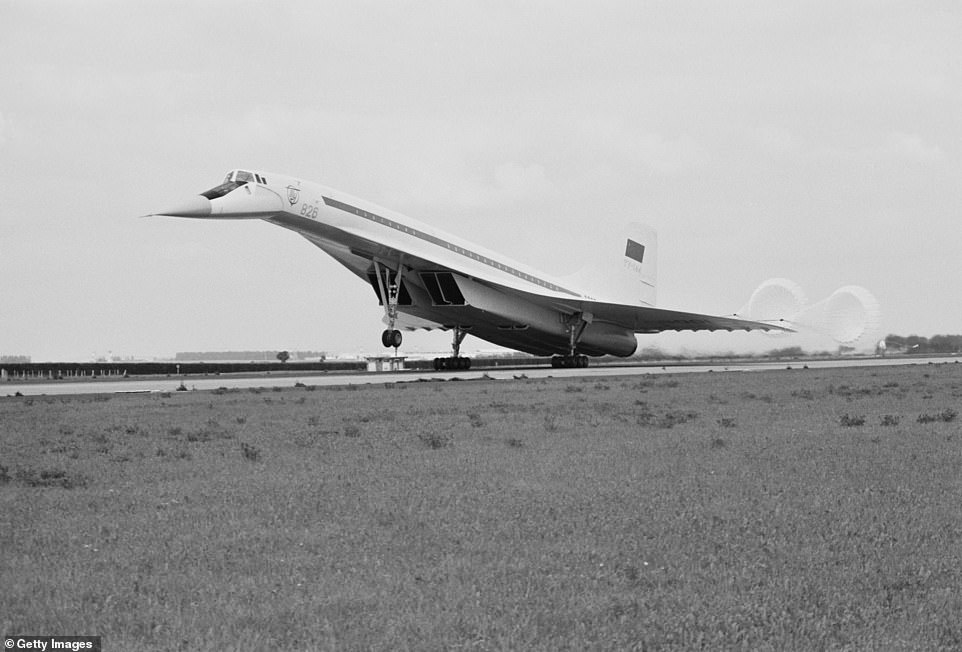 Named after A.N. Tupolev, the Soviet engineer who designed it, the plane was wheeled out of a secret hangar and successfully completed a 38-minute trip at record-setting speeds. At the start of the following June, the plane became the first passenger airliner to go faster than the speed of sound, beating the British-French Concorde by four months. 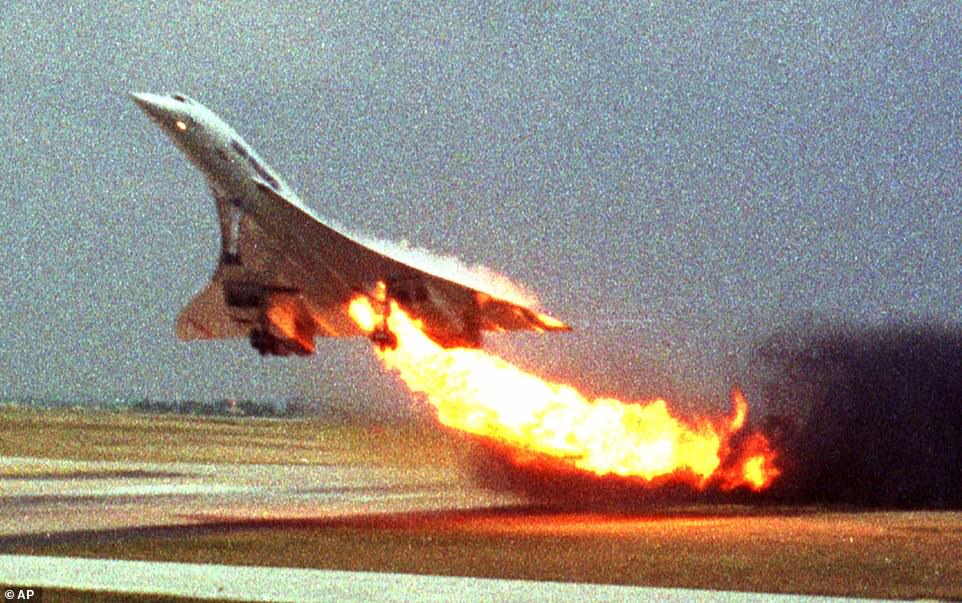 Concorde had pioneered some cutting-edge technology, such as an electronic fly-by-wire control system and carbon-based brakes, and its advanced systems meant its wings also slightly changed shape during flight to reduce drag. However, it lost its chance to really take off when, on July 25, 2000, Concorde’s Air France Flight 4590 en route from Paris to New York crashed shortly after take-off due to an engine fire. The crash killed all 109 people onboard as well as four people on the ground and marked the beginning of the end for Concorde, the world’s most famous supersonic passenger airliner. A little over three years after the tragedy, the global Concorde fleet was retired. 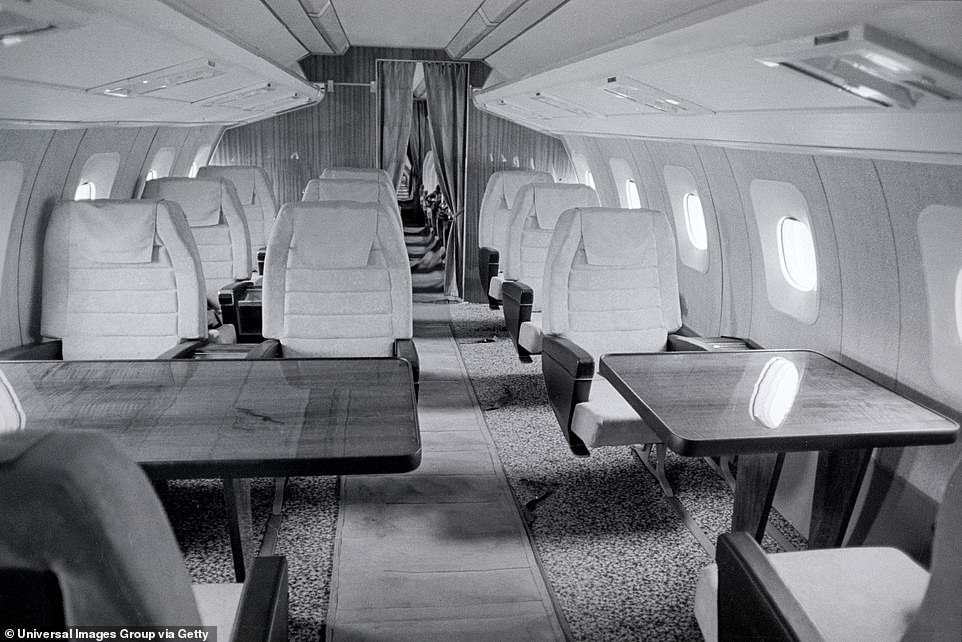 By contrast, whilst the Tu-144 (pictured) was larger and more powerful than Concorde, it was also 20 tons heavier, meaning its aerodynamic performance was not as good. At the 1973 Paris Air Show, the Tu-144’s pilots were seeking to wow the spectators as they competed with Concorde, which was also on display. 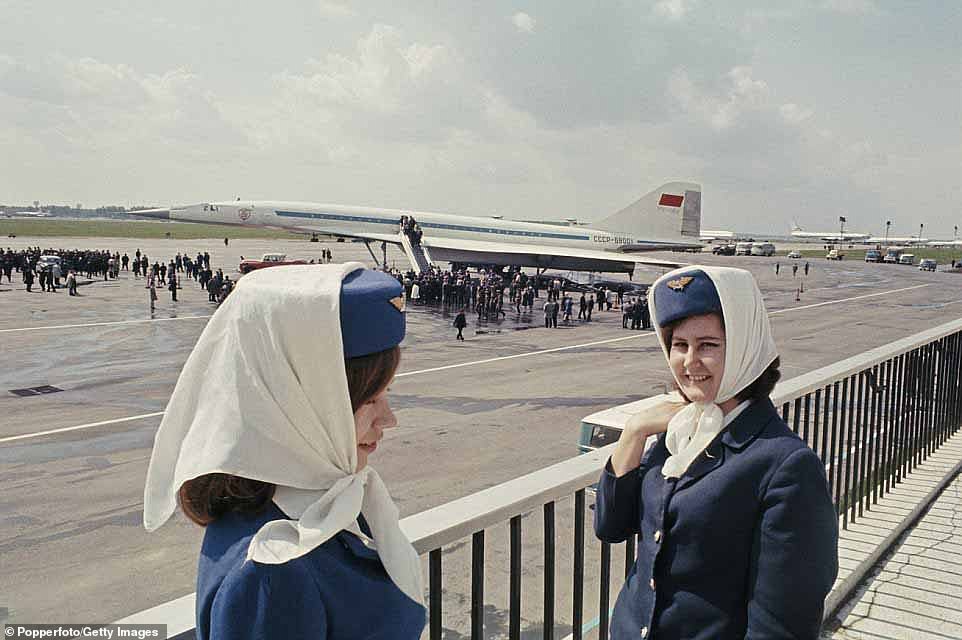 Pictured: Air hostesses smiling at a press event for the Tu-144 plane in 1969. 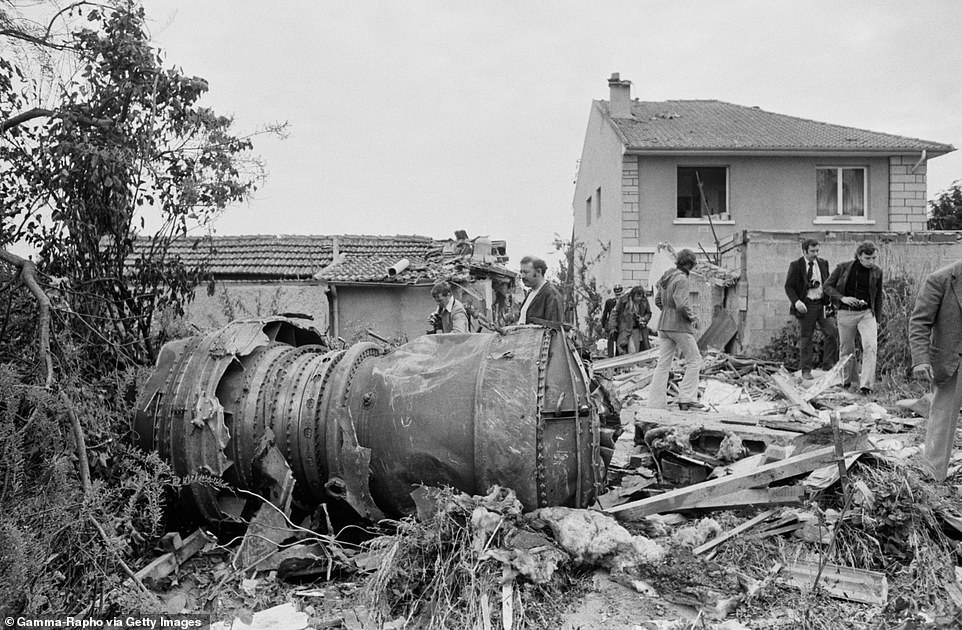 After Concorde had taken off and put on a dazzling display at the 1973 Paris Air Show, the Tu-144 took off and made an initial 360-degree turn, which was successful. But when it leveled off and began descending towards the ground, the plane could not withstand the stress it came under and it began to break up. The plane then crashed in a nearby village, killing everyone onboard as well as eight French civilians on the ground. 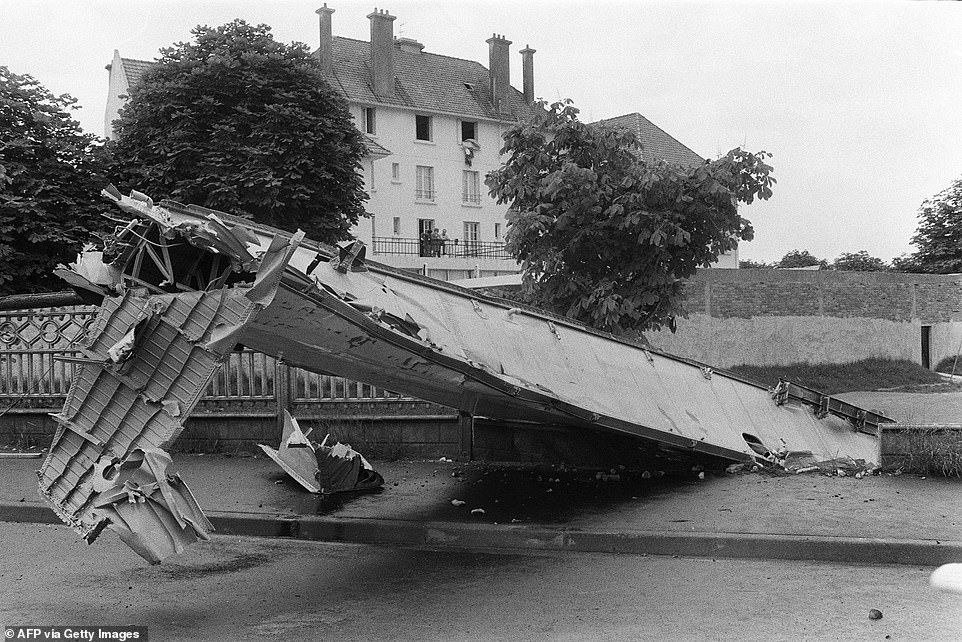 Whilst some put the crash down to pilot error, some Russian observers claimed that a Mirage fighter aircraft that was also being exhibited had caused the pilot to swerve and lose control. Regardless of the exact reason for the crash, the disaster shook the world’s faith in the Russian plane. 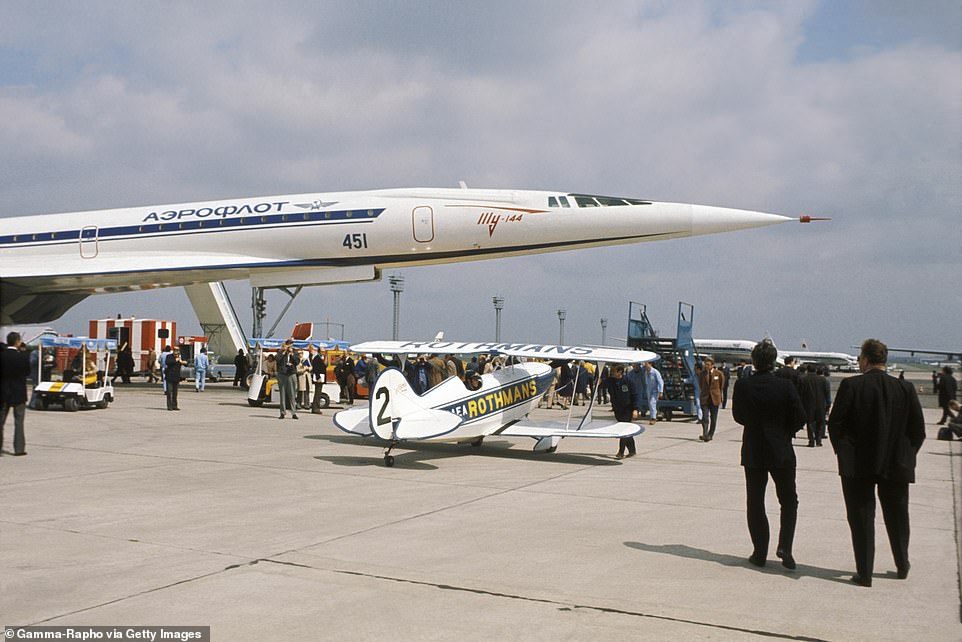 It was not until 1977 that passengers started to fly on the Tu-144 – a year after Concorde began doing so. However, passengers said that they were unable to even have a conversation onboard because the noise from the aircraft was so loud. Part of the noise stemmed from the vast air conditioning units, which were necessary to prevent passengers from overheating. Pictured: The Tu-144 in France in 1973.

People who traveled on the Tu-144 also complained that the seating was too cramped and that the toilets did not work. The final straw for the plane came in 1978, when a modified variant crashed on a pre-delivery flight to operator Aeroflot. When Aeroflot decided to pull the plug on the plane in 1982, the Tu-144 had carried out just 102 commercial flights – only 55 of which had passengers onboard. By comparison, Concorde flew more than 50,000 flights with British Airways alone. Above: Observers look at the plane during a press event. 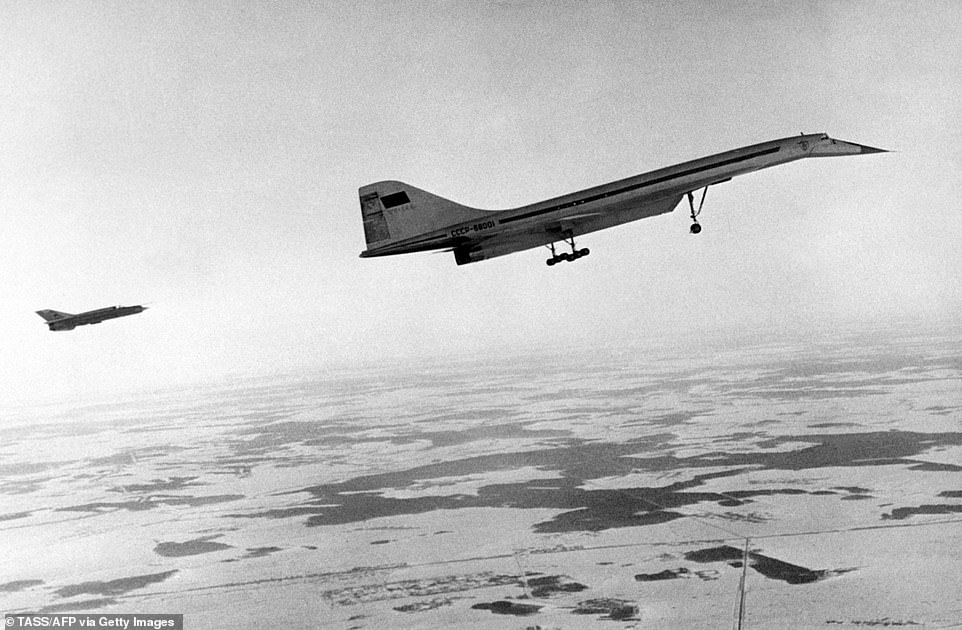 By the end of the 1980s, all the Tu-144s had been mothballed, after a brief period in which some where used to train crew for planned Soviet space shuttle flights. Overall, 16 Tu-144s were built, compared to 20 Concordes.Tu-144 continued to fly cargo routes until it was finally grounded in 1983. Pictured: Soviet aircraft Tupolev Tu-144 on December 12, 1968, during its maiden flight. It was built under the direction of engineer Alexei Tupolev.