How streaking got me off the sofa

How is your January health kick going? If you’re anything like me then you will have cracked the diet side, but exercise is letting you down. It’s hard finding a workout regime that suits you when it’s cold and wet outside.

Could streaking be the answer to my exercise problems? Don’t worry, taking my clothes off in January in public horrifies me as much as the next person. This particular streak is an exercise trend that’s growing in popularity, and is said to benefit particularly people, who, like me, lack motivation.

Streaking started out as a running movement, where runners committed to doing a minimum of one mile every single day, and has now trickled down into other fitness disciplines.

The idea of exercising seven days a week may sound horrifying, but there’s reasoning behind it. When I used to be a gym member, I intended to go four times a week, but rarely achieved that. It was too easy to wake up feeling sluggish and say: ‘I’ll definitely go tomorrow.’ Before I knew it, I’d got to Thursday and still hadn’t made it there.

With streaking, the theory is that because you know you have to exercise every day, even if it’s only a short burst, you will quickly get into a ‘no excuses, just get on with it’ mindset.

And the more you exercise, the more habit-forming it should become, until it feels as normal a part of your routine as eating breakfast and brushing your teeth. At least that’s the theory.

But my relationship with exercise has been a rocky one. I join expensive gyms, throw myself into it, then get bored. I hire personal trainers, then hide behind the sofa to avoid them (yes, seriously). I have a library of exercise DVDs that I watch while munching Jaffa Cakes.

Perhaps streaking will give me the routine and discipline I need to keep exercising without the torture of communal changing rooms?

Not wanting to set myself up for failure, I opt to get the ball rolling with a 21-day streak, as a full month seems too long. I decide to do this by downloading Streaks Workout (£3.99), a specialised app, on my iPad. Describing itself as ‘the personal trainer that you actually want to use’, it is suitable for all fitness levels.

My first step is to select a minimum of six exercises from a chart of 30 — that’s where I hit my first stumbling block. Moves like the ‘jack-knife crunch’ and ‘low-stance jack’ don’t look like they are designed with a fiftysomething with a dodgy back in mind.

It seems the days of ‘grapevine’ and ‘spotty dogs’ that I used to perform in aerobics classes back in the Eighties and Nineties are long gone. 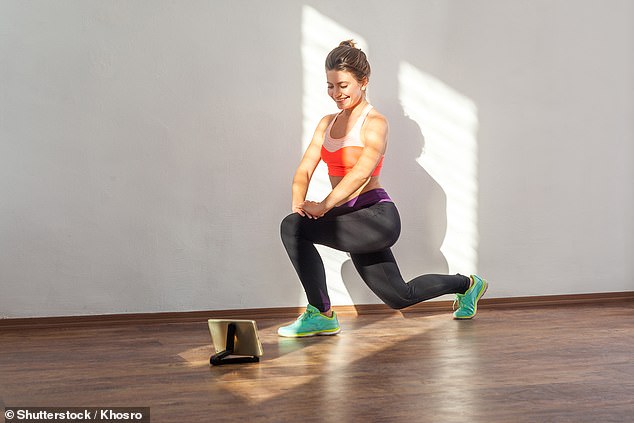 Finally, I decide on my six exercises: crunches (sit-ups), lunges, squats, knee raises, glute bridges (where you lie on your back and lift and clench your buttocks) and side-lying hip raises.

The goal is to complete a workout every day, even if that workout is a very short one. You can choose from: Quick (six minutes); Everyday (12 minutes); Tough (18 minutes) or Extreme (30 minutes). No prizes for guessing which one I start with.

The app then creates a workout for you by mixing up six of your chosen exercises.

With my trainers on and my gym mat at the ready in my living room, I press the start button and the laid-back Australian accent of ‘Gordon’, my virtual trainer, tells me to prepare for ten seconds of squats.

Gordon sounds much too chilled out for me, so I change the settings to ‘Samantha’, an American trainer, but I instantly picture her as looking a lot like Linda Hamilton in The Terminator. In the end, I go with the acceptably bossy ‘Martha’ and her cut-glass English accent.

The number of fitness instructors in the UK

Each exercise is performed for ten seconds. There’s an illustration to show you how to do the move correctly and tips also flash up on screen.

Ten seconds of squats done and it’s on to glute bridges. By the time my first ever six-minute streak is up, I’ve performed 33 squats, 23 knee raises, 20 crunches, 18 side-lying hip raises, 12 glute bridges and nine lunges. OK, it doesn’t make me Jessica Ennis, but it’s better than nothing.

I do six-minute workouts for the next two days, before upping it to an ‘Everyday’ (12 minutes). By the end of week one I haven’t missed a single streak, and vow that I’ll kick my second week off with a ‘Tough’ workout of 18 minutes.

The idea behind this app is that, as you get fitter and more toned, you start to introduce more challenging exercises. 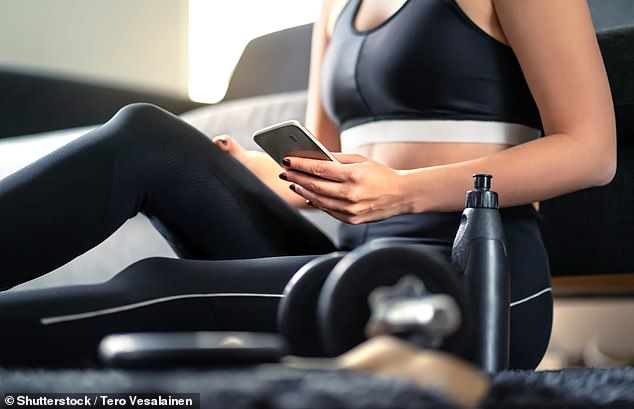 Claudia revealed she missed two days in three weeks of following the program, but says she didn’t make as many excuses as when she goes to the gym (file image)

During my second week, I settle on a pattern of three Quick streaks, three Everyday and one Tough. The Quick streaks are easy to do first thing, before heading to work, or at night after a long day.

I save the Everyday workouts for when I’m not going out in the evening and the Tough one I perform on a Sunday.

By the third week I’ve introduced a burpee (or squat thrust) and a wall sit (where you put your back against a wall and hold a sitting position).

I’m not a complete angel, though. After three weeks I’ve missed two days. One day I clean forget and, on the other, I worked very late and my duvet looked far more alluring that my rubber exercise mat. Even so, I still made far fewer excuses than I do when a gym or class is involved.

Streaks Workout is the brainchild of Australian Quentin Zervaas. In 2015, he developed an app called Streaks, aimed at helping people make new habits or break bad ones, from eating more veg to not smoking. That led to the Streaks Workout.

He says: ‘It’s really ideal for when you just want to do a quick workout at home. We know how some people struggle to find longer blocks of time for exercise.’

Quentin has a point. Going to the gym is so time-consuming. Yes, the exercise itself may only be an hour, but you’ve got to travel, find somewhere to park and shower afterwards. 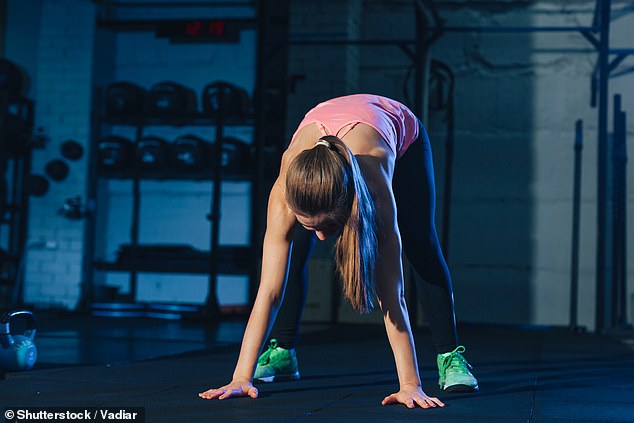 But is exercising every day, whether following an app, as I did, or jogging and cycling, a good thing according the experts?

Sports scientist Dr Richard Blagrove, a lecturer in physiology at Loughborough University, says: ‘There are those who like routine, who do something every day, even if it’s only a short blast. However, the majority would want rest days, and that goes for people doing basic keep fit up to elite athletes.

‘From a scientific perspective, you don’t get fitter while exercising — during rest and recovery your body adapts to the stress of exercise, and this is when the real training effect takes place.

‘There’s an increased risk of injury if you train every day, but it’s far more likely you’ll just get bored — three or four days a week makes much more sense.’

Still, my streaking is proving far more achievable than I imagined. As much as I hate crunches and squats, ten seconds of them is perfectly bearable. It looks as though Martha, my virtual personal trainer, may be the first one I don’t end up hiding from.