Mutt by that much! How tangled leads may have cost Aussie dog walker a Guinness world record despite his simultaneous stroll with 55 pooches smashing the previous benchmark

Dog walker Ryan Pomeroy’s attempt to break the world record for the number of dogs walked at one time may have ended in heartbreak.

Pomeroy, who runs Luna Moon’s Dog Walker service on the Gold Coast, said his effort walking 55 dogs for a kilometre at Chinderah in northern NSW on Saturday would likely not be accredited by the Guinness World Records organisation.

‘Some of the leads got tangled and someone had to intervene to help so I don’t think they’ll call it a world record,’ he told Daily Mail Australia. “We’re waiting to hear.’

Pomeroy originally wanted to walk 72 dogs as he attempted to break the current world record of 36 dogs walked, set by Queensland dog trainer Maria Harman in 2018.

‘It didn’t quite go as I planned and that’s my fault,’ confessed Pomeroy.

‘We’ll try again, I don’t know when,’ he said. ‘It was quite the planning process so maybe in about six months’. 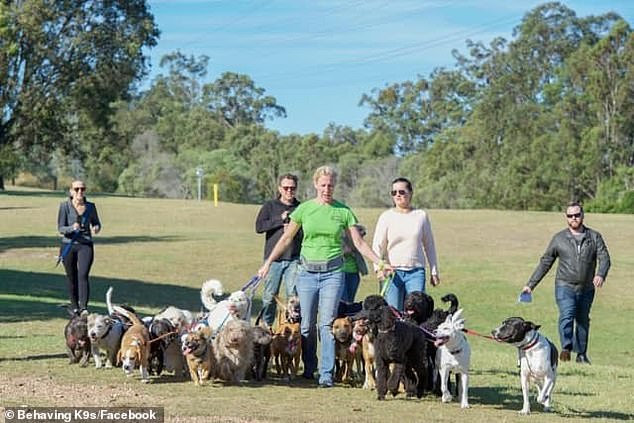 Most of the dogs included in the attempt were canines regularly walked by Pomeroy, which prevented him being turned into a human drag toy.

‘The chances of them all going after something like a bird at once were pretty slim,’ he said. “In any event they wouldn’t only be pulling me but the weight of all the other dogs, too.’