Federal Treasurer Joe Hockey handed down his second budget for the Abbott Government on Tuesday night at Parliament House in Canberra.

The big winners were small business owners and parents with hefty childcare bills, while those on the paid parental leave scheme, people on working holidays and foreign aid lost out.

The Federal Government will be delivering $5.5 billion in its jobs and small businesses package to aid growth in the economy as well as employment. There is an immediate tax deduction for items valued up to $20,000 and businesses with an annual turnover of less than $2 million will get a tax cut from 30 per cent to 28.5 per cent.

Parents will get more than $10 billion a year from taxpayers to help them pay their childcare fees once new subsidies start. The federal government will spend an extra $3.2 billion on childcare subsidies over the next four years. This is on top of the $7 billion a year – and rising – existing price tag for subsidising fees.

With this lifeline for childcare, Mr Hockey also put an end to ‘double dipping’ for parents who benefit from the paid parental leave scheme to prevent them from receiving payments from both the government and their employer. In a bid to save $968 million over the next four years, from July 2016 the government will restrict access to the scheme.

In a bid to get back more than $1 billion, the government will be cracking down on welfare cheats. The Department of Human Services will get added powers to detect fraud and recover debt. The six-month wait for the unemployed to access the dole in last year’s budget has now been reduced to a month, while parents who do not vaccinate their children will not be eligible for benefits. 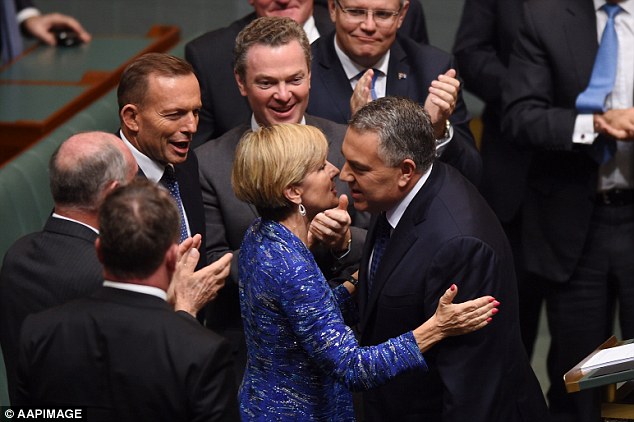 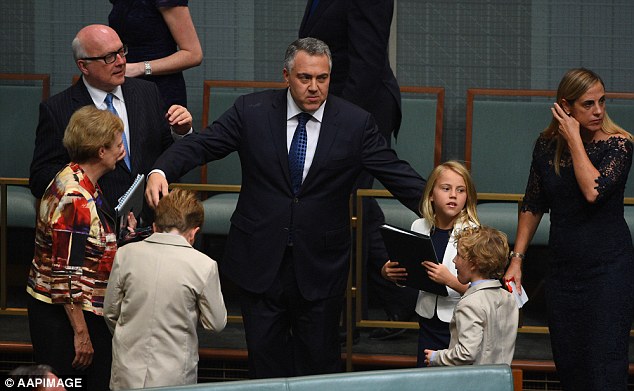 Along with his colleagues, Mr Hockey was also supported by his wife and children who sat through his speech

The growing threat from terrorism, home-grown extremism and war in the Middle East has prompted to the federal government to outlay $1.2 billion in new funding for national security. The new money comes on top of $1 billion outlined in the mid-year fiscal review, and is part of a total of $35 billion in the 2015-16 budget for defence, national security and law enforcement.

Foreign aid has been slashed by $1 billion to $4 billion in this year’s Budget. Indonesia has suffered a 40 per cent loss in aid from Australia, while Papua New Guinea saw a five per cent drop in its benefits and Nepal’s aid was slashed from $26.8 million to $33.9 million. Cambodia’s chunk of assistance has been safeguarded at $79 million, which includes part of a refugee resettlement deal.

A $1.6 billion funding boost for medicines on the Pharmaceutical Benefits Scheme has been delivered. The five-year increase will go towards will go towards giving 1,000 people subsidised access to expensive melanoma treatment, which cost up to $131,000.

From January 1, 2017, the asset-free area for pensioners will increase, which means 170,000 pensioners with moderate assets will receive a full or increased pension. This will come with an increase in the the asset test taper rate from $1.50 to $3. In other words, for every $1,000 of assets over the asset-free threshold, the pension rate will reduce by $3 a fortnight.

The controversial proposal of deregulating university fees was not revisited in this year’s Budget. But now the government plans on collecting from those who live overseas and owe tens of thousands of dollars in HECS or HELP debts. Currently, Australians living and working overseas – who could be working as high-flying investment bankers or financial brokers – do not have to repay their fees.

A further $70 million will be provided to drought-stricken farmers on top of a $333 million package announced last weekend. This money will deliver much-needed money back into the pockets of primary producers for depreciation of water facilities, fodder storage and fencing.