How the animals are just as clever as chimpanzees

They have been spotted juggling with stones and holding paws while asleep to stop a partner floating away.

Now otters have shown they are not just cute, but clever, after displaying a surprising talent at opening Tupperware.

It is easy for us to get into our lunchbox during the work day, but otters find it much harder, with one taking three hours to open a screw-top lid.

However a study has found they can use their paws, back legs and teeth to even unclip a box fastened at four sides and open a jar.

They do so because they learn from each other, British scientists found, which puts them among the cleverest creatures in the animal kingdom.

Now otters have shown they are not just cute, but clever, after displaying a surprising talent at opening Tupperware

Dr Neeltje Boogert, from the Centre for Ecology and Conservation at the University of Exeter, said: ‘We know that sea otters hold paws when they are sleeping and use tools to crack open clams, and smooth-coated otters work together to “round up” fish when they are hunting.

‘Now otters have shown another fundamentally cultural trait, which is social learning. Very few animals are known to teach their young, but anecdotally this puts them among highly intelligent creatures like dolphins and chimpanzees.

‘We hope to use this knowledge to teach captive otters how to avoid new predators like dogs and other human threats, and how to find food in the wild, which will improve their chances of survival when they are released.’

For otters, each container became harder work, ranging from a simple lunchbox with a lid to a frozen shrimp on a bamboo cane which needed to be lifted upwards and to the right to fit through a hole.

Videos of the experiment, in 24 otters taken from British zoos and wildlife parks, show them shoving the containers, trying to use their front paws, hind feet and jaws to prise off the lids.

But the ‘solution’ to opening each soon spread through the otters, who hunt together and typically live in groups of four and five.

In smooth-coated otters, those that spent most time together were most likely to solve the problem together.

The solutions spread through this group, helping them get into containers in an average of 20 minutes, which showed they were copying each other.

Dr Boogert said: ‘The order in which the young otters solved the puzzles followed the strength of their social ties. This indicates that the juveniles copied those siblings they spent most time with.’ 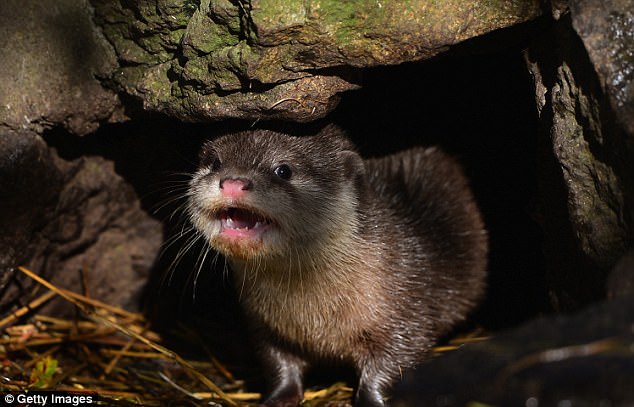 In the smooth-coated otters, although not Asian short-clawed otters (pictured), the authors found they used social learning more than a quarter of the time, with the results expected to apply to native British otters too

Just as human children often master internet tasks more quickly than their parents, the young otters were six times as fast as their parents.

In the smooth-coated otters, although not Asian short-clawed otters, the authors found they used social learning more than a quarter of the time, with the results expected to apply to native British otters too.

This is important for areas where endangered otters are being reintroduced into the wild, such as the Isle of Skye.

The Tupperware test could lead to animals being shown videos of other otters looking frightened around dogs, for example, which could teach them to be wary.

The study, published in Royal Society journal Open Science, states: ‘Conservation organisations facilitating reintroduction programmes could benefit from using social transmission as a way of training captive-bred otters to cope with life in the wild.

‘Previous research suggests that animals trained on important life skills (e.g. anti-predator behaviour) through social learning have a higher survival rate once reintroduced into the wild.’