How the ‘fracking boom’ has damaged America’s air quality

Urban air pollution in the U.S. has been decreasing near continuously since the 1970s.

Federal regulations, notably the Clean Air Act passed by President Nixon, to reduce toxic air pollutants such as benzene, a hydrocarbon, and ozone, a strong oxidant, effectively lowered their abundance in ambient air with steady progress.

But about 10 years ago, the picture on air pollutants in the U.S. started to change.

The ‘fracking boom’ in several different parts of the nation led to a new source of hydrocarbons to the atmosphere, affecting abundances of both toxic benzene and ozone, including in areas that were not previously affected much by such air pollution.

Scroll own for video

Tanker trucks, capable of hauling water and hydraulic fracturing liquid, line up near a natural gas burn off flame and storage tanks in Williston, North Dakota. Fracking has led to an increase in truck traffic, one of the reasons for worsening air quality in areas with oil and gas drilling

Fracking, short for Hydraulic Fracturing, is a process that produces fractures in the rock formation that stimulate the flow of natural gas or oil, increasing the amounts that can be recovered.

The fractures are created by pumping large amounts of fluids at high pressure down a wellbore and into the target rock formation.

As a result, in recent years there has been a spike of research to determine what the extent of emissions are from fracked oil and gas wells – called ‘unconventional’ sources in the industry.

While much discussion has surrounded methane emissions, a greenhouse gas, less attention has been paid to air toxics.

Fracking is a term that can stir strong emotions among its opponents and proponents.

It is actually a combination of techniques, including hydraulic fracturing, that has allowed drillers to draw hydrocarbons from rock formations which were once not profitable to tap.

Drillers shatter layers of shale rock with high-pressure water, sand and chemicals to start the flow of hydrocarbons from a well.

The hydraulic fracturing process itself, aside from its large demand for water, is possibly the least environmentally impactful step along the complete operational chain of drilling for hydrocarbons.

Arguably, the more relevant environmental effects are wastewater handling and disposal, as well as the release of vapors from oil and gas storage and distribution.

The production, distribution and use of hydrocarbons have always led to some emissions into the air, either directly via (intended or accidental) leaks, or during incomplete combustion of fuels.

However, through regulations and technological innovation, we have reduced this source dramatically in the last 30 years, approximately by a factor of 10.

Nevertheless, wherever hydrocarbons are produced, refined or stored, there will be some emissions of pollutants.

In the age of fracking, the large operations at conventional well sites have been replaced by hundreds of well pads dotting the landscape.

Each requires the transportation of water, chemicals and equipment to and from these pads as well as the removal of wastewater, and none is regulated like any larger facility would be.

As a result, unconventional production has not only increased truck traffic and related emissions in shale areas, but also established a renewed source of hydrocarbons.

They enter the atmosphere from leaks at valves, pipes, separators and compressors, or through exhaust vents on tanks.

Together with nitrogen oxides emissions, largely from diesel engines in trucks, compressors and drilling rigs, these hydrocarbons can form significant amounts of harmful, ground-level ozone during daytime.

In 2011, a paper argued that methane emissions from unconventional sources compared to conventional oil and gas exploration were being significantly underestimated.

And thus a significant body of literature has developed since 2013, much of which focuses on methane emissions, the main component of natural gas and a potent greenhouse gas.

The EPA keeps track of methane emissions in its greenhouse gas inventory, but the numbers are based upon estimates developed in the 1980s and 1990s and are compiled through calculations and self-reporting by the industry.

In fact, both satellite and atmospheric measurements suggest that the EPA estimates could be underestimating real-world methane emissions by up to a factor of two.

And if this is true for methane, co-emitted hydrocarbon gases are likely underestimated as well.

As in many such cases, nuances exist.

Airborne measurements by NOAA suggest that the EPA methane estimates may be applicable to older, mature shale areas with mostly natural gas production.

But that’s not the case in younger shale areas that also produce large amounts of oil alongside natural gas, such as the Bakken in North Dakota.

Emissions from just the Bakken may be so large as to be responsible for roughly half of the renewed increase of atmospheric ethane in the Northern Hemisphere since the beginning of the fracking boom.

Similarly, our own studies for the Eagle Ford shale in south-central Texas suggest that hydrocarbon emissions are higher than currently estimated.

This increases the potential for regional ozone formation as these hydrocarbons are oxidized in the atmosphere in the presence of nitrogen oxides. 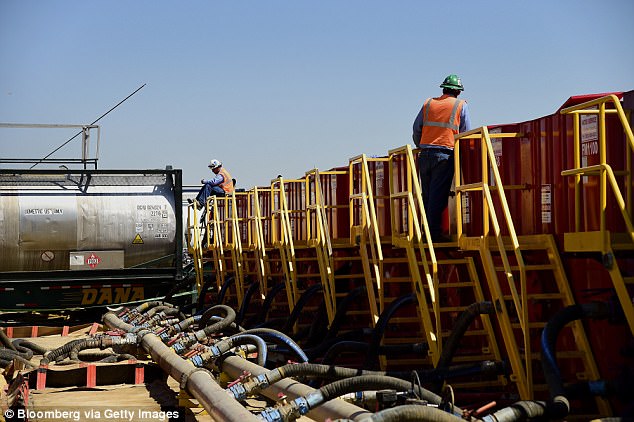 And as the ozone National Ambient Air Quality Standard was recently lowered to 70 parts per billion, with ozone in San Antonio downwind of the Eagle Ford trending close to the old threshold of 75 ppb, the impact of shale hydrocarbon emissions is not trivial.

San Antonio’s ozone woes are not unique. In some areas, decades-long progress on ozone air quality has stalled; in others, particularly the Uintah basin in Utah, a new ozone problem has emerged due to the fracking industry’s emissions.

Aside from effects on ozone trends, the increase of hydrocarbon emissions has also led to the resurgence of an air toxic thought to be a story of the past in the U.S.: benzene.

Unlike ozone, which is widely monitored, benzene is not.

However, since it is a known carcinogen, it has long been on the radar of regulatory agencies.

Routinely measured above 1 part per billion in urban areas in the 1970s and ’80s, urban ambient benzene concentrations have dropped 5-10 percent per year, similar to other air pollutants, throughout the last 20 to 30 years.

Annual average benzene levels are now below 1.5 parts per billion at over 90 percent of locations monitoring benzene regularly, but few such monitoring stations are in or near shale areas. 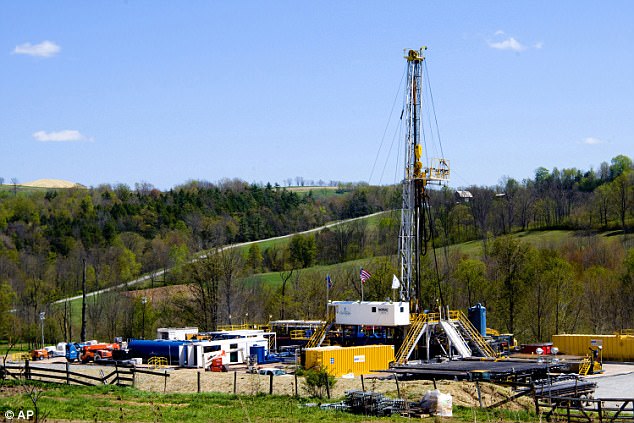 A Chesapeake Energy natural gas well site near Burlington, Pennsylvania in Bradford County. Some geologists estimate that the natural gas locked in rock deep beneath Pennsylvania, New York, West Virginia and Ohio is enough to supply the entire East Coast for 50 years

High levels of benzene in shale areas, such as near well pads in the Barnett shale in Texas, were recorded early into the fracking boom, but few continuous air monitoring data are available to this day, with virtually no data prior to the fracking boom for comparison.

While benzene is generally monitored below levels the Texas Commission on Environmental Quality (TCEQ) would be concerned about, it is becoming clear that levels must have increased at rural shale area locations.

Our fingerprinting analysis of 2015 data from the newest air monitor in Karnes City, Texas, at the center of the Eagle Ford shale, suggests that less than 40 percent of benzene is still related to tailpipe emissions, its formerly dominant emission source.

Instead, over 60 percent is now linked to various oil and gas exploration activities, including gas flaring emissions.

Studies from Colorado and Texas show that elevated levels of benzene in shale areas are clearly correlated with other hydrocarbon gases emitted from oil and gas exploration. 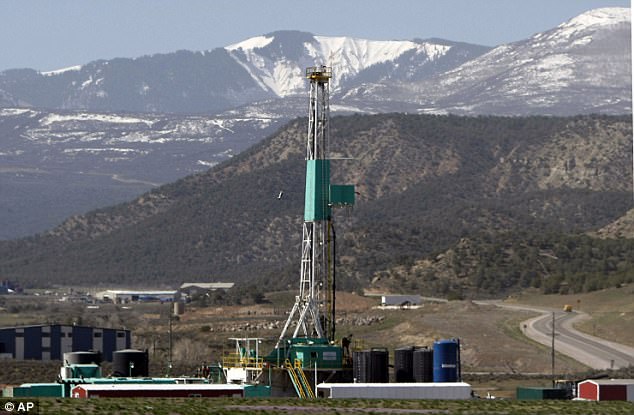 In this April 22, 2008 photo, a natural gas well pad sits in front of the Roan Plateau near Rifle, Colorado

While ozone is distributed relatively uniformly in a region, primary emissions of benzene and other nonmethane hydrocarbons will be at higher concentrations in air next to sources.

The risks for people living in shale areas are elevated by their nearness to well pads.

Ongoing health research has revealed that certain minor health effects such as sinusitis, migraines and fatigue, but also hospitalization rates and certain birth defects, are identifiably connected to an area’s well density or a home’s distance to oil and gas wells as a proxy of exposure, warranting more detailed research.

While the effects are subtle, they happened in areas generally without any air pollutant monitoring, making estimates of trends difficult.

In many cases, these pollutants can be reduced by common-sense emissions reduction measures, and some companies put or plan to put good practice in place.

Nevertheless, continued growth of the fracking industry as well as plans to remove regulations on methane emissions will not alleviate high hydrocarbon emissions and associated regional ozone problems. 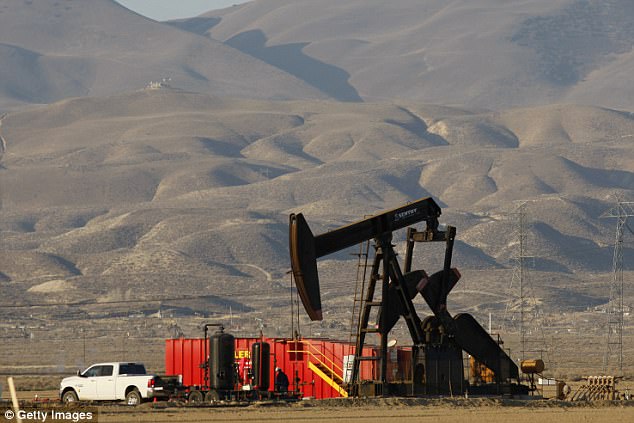 A pump jack and fracking tank stand in a field being developed for drilling next to a farm over the Monterey Shale formation where gas and oil extraction using hydraulic fracturing, or fracking, is on the verge of a boom on March 24, 2014 near Lost Hills, California