Indeed, when a visibly nervous Prince Harry turned to his father, who had just walked his glamorous bride down the aisle, and said ‘Thanks Pa’, few others would have heard him at all.

Yet when they were repeated just three days later at a Buckingham Palace garden party to mark the Prince of Wales’s forthcoming 70th birthday, the depth of gratitude rang out loud and clear.

Harry marked the occasion with a speech of self-deprecation and rare warmth, saying: ‘Pa, while I know that you’ve asked that today not be about you, you must forgive me if I don’t listen to you. Much like when I was younger. Instead, I ask everyone here to say a huge thank you to you, for your incredible work.’

Yet the relationship between this father and his two princely sons has not always been so cordial, with the boys seeming frosty and at times belligerent towards Charles. So Harry’s new-found generosity towards the Prince of Wales is significant indeed.

This newspaper understands that the past few months have seen a remarkable thawing between Charles and Harry – and that the person behind this about-face is the Prince’s new bride, Meghan.

William too has been far from deferential towards Charles. Palace insiders say that the Duke of Cambridge has even been known to raise his voice at his father. And when Charles chose to maintain a dignified silence during the 20th anniversary of Diana’s death last year, there was speculation this was an expression of a family rift.

Yet Meghan has brought with her a new and unexpected dynamic, and not just because she, too, has grown up negotiating a fractured family. (Even before the wedding, Harry had remarked that Meghan regarded the Windsors as ‘the family she never had’).

More than that, it is her newfound relationship with Charles that is proving to be key.

‘Meghan met Charles and was bowled over by his charm,’ said a family source. ‘She told Harry he was wonderful: welcoming, warm, hard-working kind and stable.

‘She made it clear that he should appreciate him and bond more.’

In turn, Charles, with a twinkle in his eye, has been completely taken with her, telling friends: ‘She is so intelligent and so nice. She makes Harry happy. We could not like her more.’

Never before had Charles shown so much support towards one of Harry’s girlfriends, and Harry was visibly moved.

‘There has been a wedding bonus for all the family: a sort of mega-watt warming effect,’ said the friend.

Meghan, meanwhile, has actively charmed her new father-in-law. She consulted Charles about the music for the wedding, while the Prince of Wales has taken time to discuss the complexities of life in ‘The Firm’.

It helps that Meghan is fascinated by Royal history – more so than her husband – and sources say she is poring over lever-arch files of notes as she studies the Commonwealth.

Charles sees his work ethic and his passion for philanthropy reflected in Meghan, who has campaigned to raise awareness of women’s issues. It will not have escaped his notice that she shares his belief in organic food.

Camilla, too, has played her part as a sort of ‘super-granny’, dispensing humorous, down-to-earth advice to Meghan. It is understood that the two ‘outsiders’ have become friends – they were seen clasping hands as they greeted one another at the Palace on Tuesday. 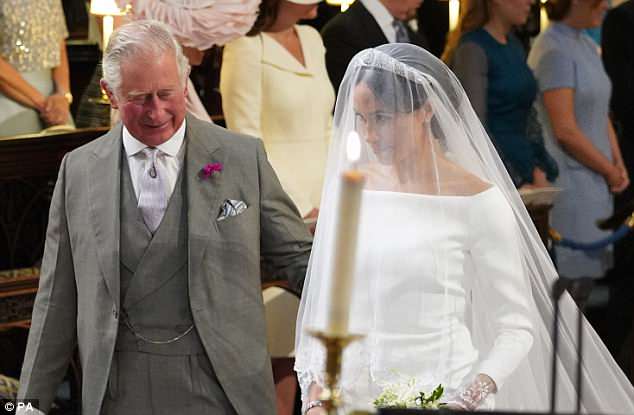 And the result of Meghan’s magic? A resumption of warm relations between Harry and Charles.

There has certainly been plenty to work on for the newly ennobled Duchess of Sussex. It is hardly a secret that William and Harry endured a difficult adolescence after the death of their mother Diana in 1997 when they were just 15 and 12. Their father – whom they blame for being absent during much of their childhood – has often been the target of their unhappiness.

In the days before his work as a full-time Royal, William notably preferred to concentrate his energies on his own young family rather than spend time with his father in the West Country or London. There has been relentless competition and a definite froideur between William’s court and that of Charles. Yet today, even he is said to be defrosting under Meghan’s influence.

The Queen, too, has been taking a keen interest in Meghan, thanks not least to their shared love of dogs. The day before the wedding, the Queen, who recently lost her last corgi, appeared to share a car with Meghan’s beagle, a rescue dog called Guy.

More significant still is the transfer of Her Majesty’s trusted and long-serving aide, Samantha Cohen, from Buckingham Palace to Kensington Palace – seen as a personal gift to Meghan.

Nicknamed ‘Samantha the panther’ for her ‘no-nonsense’ approach, the 49-year-old Australian has been advising Meghan for several months now.

She has considerable diplomatic expertise after 17 years with the Royal Family, and will help guide the young couple in their new Commonwealth roles.

The court of William and Harry has until now been dominated by military aides and mentors such as former SAS officer Jamie Lowther-Pinkerton and Captain Ed Lane Fox, who leaves soon.

Her Majesty has decided a gentler hand might be more appropriate, feeling that William and Harry communicate more naturally with the public than does their father.

It is clear she sees the young Royals as having the star quality to take ‘The Firm’ forward and safeguard its future in a changing world.

And Meghan Markle is no small part of that.