A tattered teddy falling to pieces, a family heirloom gradually crumbling in the attic, a precious clock that no longer keeps time… almost every household has a treasured possession that’s seen better days.

And there they hide away, untouched for years, their owners having lost the skills once handed down through generations that could bring them back to life, yet somehow reluctant to let them go.

And that’s the way many would have stayed if it wasn’t for The Repair Shop, BBC1’s surprise smash hit that brings together a host of master craftsmen to restore these most precious of objects.

A skeleton clock, a design that shows the inner workings of a timepiece first seen in France at the end of the 18th Century, was restored to its former glory by artisan Steve Fletcher

Launched in 2017, the programme now has two million fans tuning in every afternoon. They include Stephen Fry and Pointless’s Richard Osman who have called The Repair Shop the best show on TV.

And its secret? A perfect blend of moving stories behind the objects needing mending, the breathtaking skills of the dedicated conservators who work on them, often for days, and the touching – usually tearful – moment the owner sees their most cherished possession restored.

No wonder the instant that each programme finishes, Twitter is alive with viewers delighting in the latest restoration or comparing how much they cried. 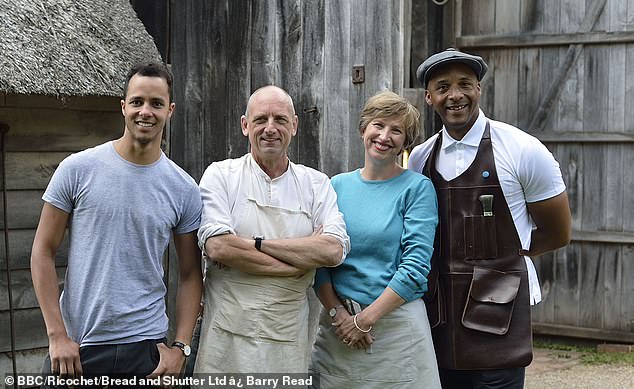 The Repair Shop was launched amid this changing culture, returning to our screens last week, much to fans’ delight. Presenters William Kirk, Steven Fletcher, Kirsten Ramsay, and Jay Blades are pictured above

But there’s another reason this most gentle of programmes has proved so popular: it has tapped into our growing desire to go back to the days of ‘make do and mend’.

As the price of once-expensive goods like home electricals has come down over the years, we’ve lost the ability to repair that was once vital.

Indeed, some are designed to be almost impossible to repair, with sealed units or such complicated internal workings that only a very expensive expert could fix. So, instead, we throw them out and buy another.

How many of us could confidently take apart an iPhone or look underneath the bonnet of a car to do a repair, without seeking help from a professional?

Perhaps unsurprisingly, it’s millennials who most lack the skills their grandparents took for granted. 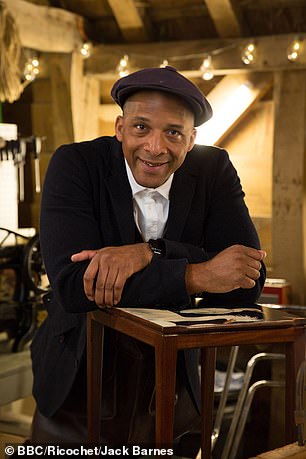 BBC TV Presenter Jay Blades is pictured above. Launched in 2017, the programme now has two million fans tuning in every afternoon

But there are signs things are changing.

In an era when we are much more conscious of the planet’s finite resources, the move away from mass-produced goods to much more precious items individually honed by artisans gathers pace.

And more repair shops are opening up on our high streets due to popular demand.

In fact, the number of outlets fixing everything from phones to furniture has risen by more than a third across the UK since 2010.

And it’s happening online too. Facebook message boards are buzzing with local communities swapping and re-selling pre-loved goods, while websites such as Preloved and Freecycle are rescuing and recycling items that would once have gone straight to the tip.

The Repair Shop was launched amid this changing culture, returning to our screens last week, much to fans’ delight. And thanks to its soaring popularity, there’s an accompanying book full of tips and hints to encourage us to start mending once more.

When Albert Thompson, then 22, and his fiancee Eileen spent 50 shillings (£2.50) on a portable transistor radio in the 1950s, they had no idea the wireless would become a poignant symbol of their love.

‘When Eileen and I first started courting,’ remembers Albert, ‘we saw this and clubbed together and bought it and we took it all over with us.

‘We’d get out of the car, go on the beach and once this was going everyone started to come towards us.’ 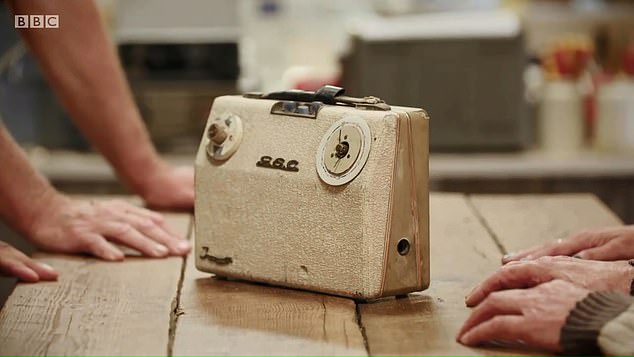 With Albert needing this most important link to his own personal past, four Repair Shop experts got to work. The circuitry was renewed, a new handle fitted, the case was cleaned and a new dial made

The beloved GEC radio also went on holiday with them and fast became a fixture of family life. So much so that when it broke for the first time in the 1980s, a nephew repaired it, replacing the buttons with the ends of toothbrushes.

But when it stopped for a second time, not only were the problems far more serious, it was even more vital to fix it.

‘I used to have it in the greenhouse with me,’ explains Albert, ‘and two years ago it stopped – it was two years to the day after Eileen passed away. She was an absolute ace and I really do miss her.

‘This radio means so much to me and my family. I just don’t want to get rid of it. I want it to be working again.’

With Albert needing this most important link to his own personal past, four Repair Shop experts got to work. The circuitry was renewed, a new handle fitted, the case was cleaned and a new dial made.

And when Albert returned, not only was it working, it was playing a very familiar tune, Roy Orbison’s Born To Love Me.

‘We used to smooch to this at the last dance,’ he says with tears in his eyes. ‘I’m over the moon.’

After Nigel Burch’s grandfather lost the use of his arm fighting in the First World War, he took up running to help restore his health.

He became successful at the sport, and a skeleton clock he won in an athletics competition has since become a cherished heirloom for his family, even though it no longer works. For Nigel, it was important to get the clock going again.

‘It’s my intention,’ he explains, ‘to pass it on to my son who coincidentally suffered almost the same injury as my grandfather did.

‘He’s only 30 now and three years ago he was involved in a horrible motorbike accident and he’s lost the use of his left arm.’

Like his great-grandfather, Nigel’s son Peter has turned to sport to aid his recovery and is hoping to compete in the Paralympics in Tokyo in 2020.

‘The clock is a sign of my grandfather’s courage in adversity. And now my son is in a similar position, it will be nice to pass it on to him and give him some inspiration,’ says Nigel.

The skeleton clock, a design that shows the inner workings of a timepiece first seen in France at the end of the 18th Century, was restored to its former glory by artisan Steve Fletcher.

When he saw it, Nigel wiped away a tear as he passed it to his son. ‘It’s going to be treasured,’ Peter reassured him. ‘And it’s massively going to spur me on.’

When violinist Rosa Levinsky left her Leeds home to play in the Berlin Philharmonic Orchestra in the mid-1930s, she was soon swept up in the turmoil of the times.

But Rosa’s musical talent was to keep her alive, playing to entertain guards.

‘That was her lifeline,’ says Natalie, who brought the precious instrument to The Repair Shop to be mended. ‘She was part of the women’s orchestra.’ 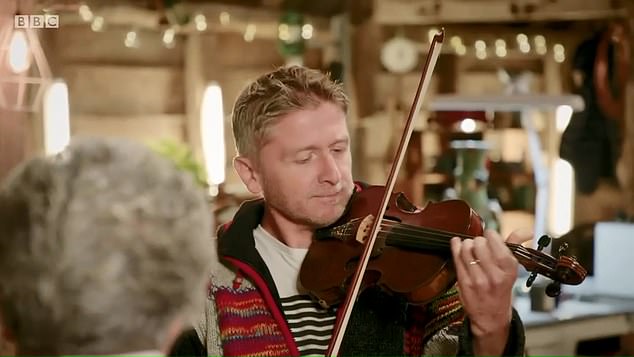 Finally, when hostilities ceased, she returned home to Yorkshire but died in 1947. The violin passed to Natalie’s father, a musician who died in the 1980s. ‘He loved the violin. That was his life,’ she says.

‘And fortunately, I have those memories. That’s what it represents.’ But the violin was in very poor condition. It fell to expert John Dilworth to bring it back to life.

And when Natalie went to collect it, she found leading violinist Christian Garrick playing a specially composed piece called Rosa’s Wishing Waltz for her. ‘I was overwhelmed,’ she says.

‘It was beautiful – I was suddenly transported back, I could see my father playing.’

On discovering a battered old box in his late sister’s attic, the last thing Alan Thompson expected to find was a long-held and quite shocking family secret.

But that’s what it contained. ‘Inside was the application for my adoption by who I thought were my parents,’ he says.

‘In fact, they were my grandparents and Ethel, my eldest sister, was my mother. And she never let on.’ 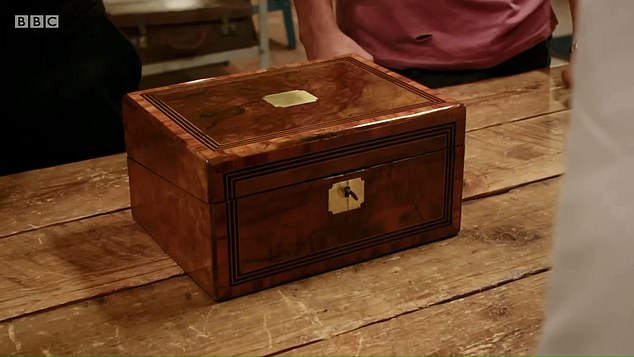 On discovering a battered old box in his late sister’s attic, the last thing Alan Thompson expected to find was a long-held and quite shocking family secret. But that’s what it contained. ‘Inside was the application for my adoption by who I thought were my parents,’ he says

He discovered the box – a Victorian writing slope – under the eaves of Ethel’s attic after her death in 2006 and almost disregarded it because it was in such a state of disrepair.

Alan took it to The Repair Shop in the hope their experts could return it to its former glory and provide a treasure chest for storing those life-changing documents. ‘It’s more than a box to me,’ he says.

‘Getting the slope repaired would mean the world because it has so many memories. I don’t know how old it is or its history but the fact it has my adoption papers in it really means something.’

With the box looking like it had gone through either a fire or a flood – the lid was charred and veneer either missing or fractured – it fell to carpenter Will Kirk to effect a repair.

The stunning result, above, left Alan – and many viewers – close to tears. ‘It’s marvellous,’ he said. ‘I’m lost for words. This will take pride of place in my home.’

Jill Padmore was nine when her father died and the loss haunted her for years, during which time Panda, left, a gift from her father, became her only confidant and friend.

‘I didn’t come to terms with my father’s death for 20 years,’ says Jill. ‘But throughout that time, Panda was always there. He deserves to be looking beautiful again. I want to pass him on to my son Edward.’

Soft-toy experts Julie Tatchell and Amanda Middleditch got to work on him. ‘They’ve given me a piece of my childhood back,’ said Jill, ‘and a link to my dad.’ 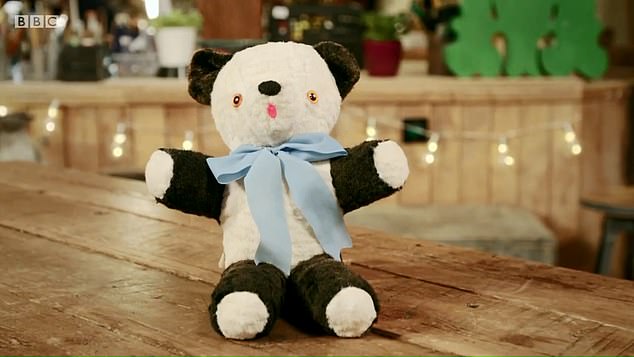 Jill Padmore was nine when her father died and the loss haunted her for years, during which time Panda, left, a gift from her father, became her only confidant and friend

The Repair Shop: A Make Do And Mend Handbook, by Karen Farrington, is published by BBC Books, priced £14.99.