How Theresa May switched from glum to glam

With a sex-pest scandal convulsing Parliament, you could forgive Theresa May for looking weary as another working week began.

However, by last night the Prime Minister was a woman transformed as she swapped Westminster for Mayfair.

Red lipstick highlighted a beaming smile as she attended the Pride of Britain awards at Grosvenor House – in stark contrast to the expression captured in Downing Street that morning. 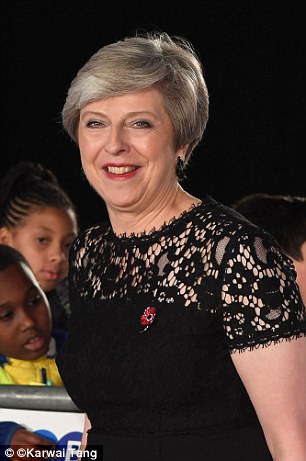 Left, Theresa May looks downbeat outside No10 Downing Street and right, the PM looking polished as she arrives on the red carpet at the Pride of Britain Awards in Mayfair

Mrs May, who stopped to sign autographs outside the event, wore an eye-catching black dress with a lace effect – and also appeared to have a glucose monitor on her arm.

The device is used by diabetes sufferers like the Prime Minister to check their blood, to help decide when they should inject themselves with insulin.

During the awards ceremony, Mrs May took to the stage with Labour Leader Jeremy Corbyn and leader of the Liberal Democrats Sir Vince Cable to pay tribute to the heroism of Pc Keith Palmer.

The officer gave his life protecting parliament during the London Bridge terror attack in March.

The PM said it was ‘fitting’ that Pc Palmer was the first person to receive a posthumous Pride of Britain Award for outstanding bravery, as he gave his life to protect others.

She said: ‘As he stood in defence of parliament, facing down and tackling that evil terrorist unarmed, he stood for Britain, he gave his life for Britain, he was quite simply the pride of Britain.’ 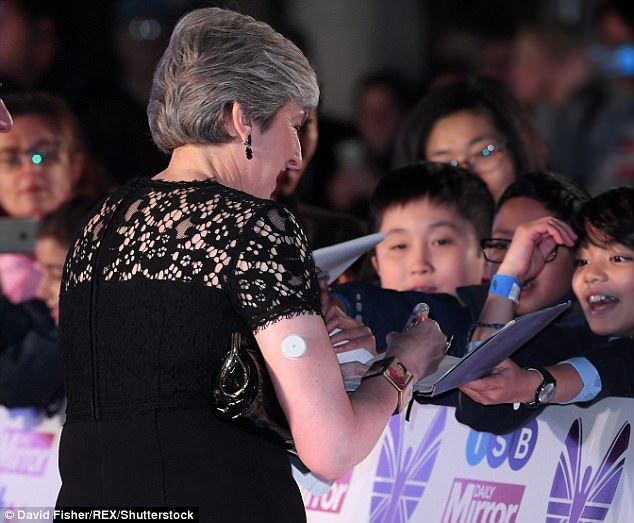 William praised the firecrews who put their lives at risk to save residents trapped in the devastating Grenfell Tower inferno in west London.

Presenting the This Morning Emergency Services Award to the firefighters, He said: ‘Many people forget the daily grind you go through on a daily basis.’

The Prince also presented a special recognition award to the community around Grenfell Tower.

During an emotional speech, he said: ‘Thank you for the hard work you’ve all done, the community spirit you’ve shown, the coming together as you did so quickly after Grenfell. 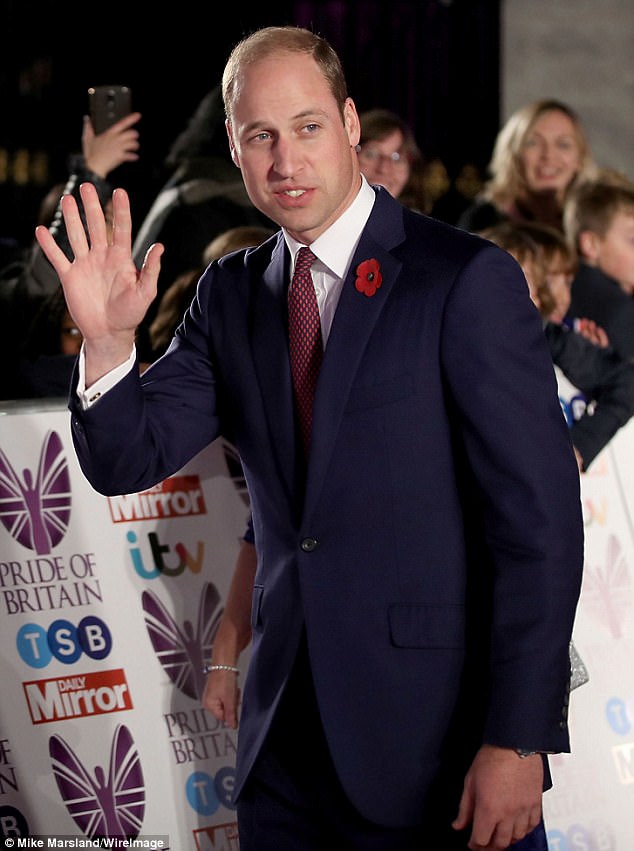 ‘I’m just so sorry that such an awful event ever occurred.’

He added: ‘I can only imagine how horrendous and difficult it has been for you all.’

William also joined muscian Ed Sheeran in a presentation to emergency responders at the Manchester bombing in May.

He said: ‘I genuinely don’t know how you see some of the things you see and I don’t understand how difficult it must have been for you.’

He added: ‘You take those scars home with you mentally and yet you come back the next day and you still do fantastic work.’