How TikTok could help you survive the Covid-19 lockdown

It’s the video-sharing app for attention-seekers that, until recently, will have been a mystery to anyone over the age of about 16.

But now TikTok is, all of a sudden, heading for the mainstream.

It allows users to record and edit footage – often of themselves dancing, miming to music or performing pranks – into chunks of anything from 15 seconds to a minute. 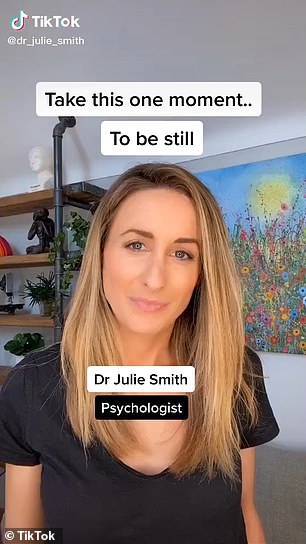 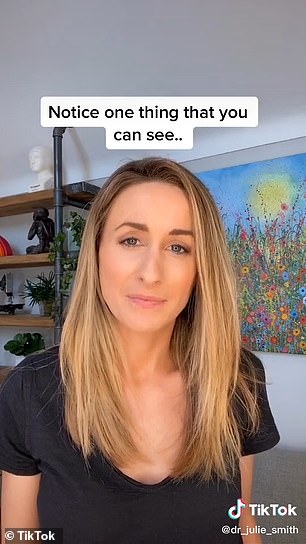 Dr Smith, pictured, is using TikTok to help people cope with the stress of being locked down

And there are a lot of other users: the app has been downloaded two billion times worldwide, according to a recent count.

In the first week of the lockdown alone, TikTok was installed by more than 300,000 Britons, and one in three of us has, apparently, got it on a smartphone or tablet, no doubt in an effort to alleviate some of the boredom of enforced social distancing.

But not all of the attention gained has been positive.

Nurses have faced criticism for ‘insensitively’ uploading videos in which they are seen dancing in hospital corridors while wearing full protective gear, while police officers in Merseyside were told they could face disciplinary action for a similar post.

Despite this, there is a growing army of health experts using the app to promote positive health messages.

At the start of the pandemic, the World Health Organisation started broadcasting advice via TikTok. And now, with the thirst for medical knowledge at an all-time high, scores of doctors have joined the platform, keen to have their voice heard.

From tips on boosting mental health to medical myth-busting, their videos have racked up millions of views. Take clinical psychologist Dr Julie Smith, who has attracted 700,000 followers seeking psychological support. 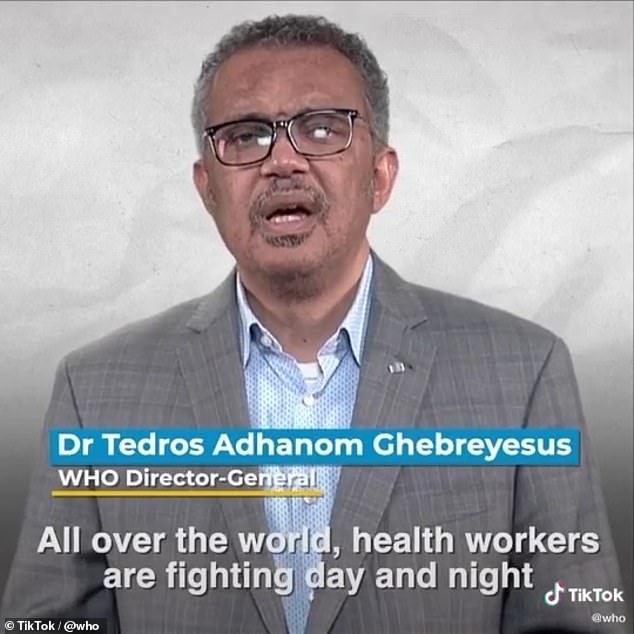 The 36-year-old first began posting about practical methods of coping with mental illness before the lockdown, to plug the gap for those on lengthy waiting lists.

‘I was having a lot of referrals from people suffering with low confidence, anxiety and stress,’ she says. ‘A lot of them just needed education on symptoms of anxiety and how to manage them. I don’t see why someone should have to pay to see a therapist – or wait for months and months to see one on the NHS – to find out this stuff.’

Dr Smith’s popularity, and demand for her virtual assistance, grew steadily. From strategies for tackling anxious thoughts, to tasks to test your cognitive abilities, her videos are not frivolous.

They attract up to 15 million views in a month. And it’s not just teens who follow her. ‘I’ve had everyone from widowed adults, to older people trying to cope with retirement get in touch after watching my videos,’ she says.

Recently, NHS surgeon Dr Karan Rangarajan was catapulted into the limelight with his short, ‘myth-busting’ clips on TikTok about the coronavirus. He dons medical scrubs and a stethoscope in most of his videos, and has more than 340,000 followers.

In one video he explains why people don’t need to wear gloves to protect against the virus. The 30-second clip has been watched over 600,000 times. In another, he shows the science behind the benefits of thorough hand-washing, while other clips tackle safe sexual intimacy during the pandemic. 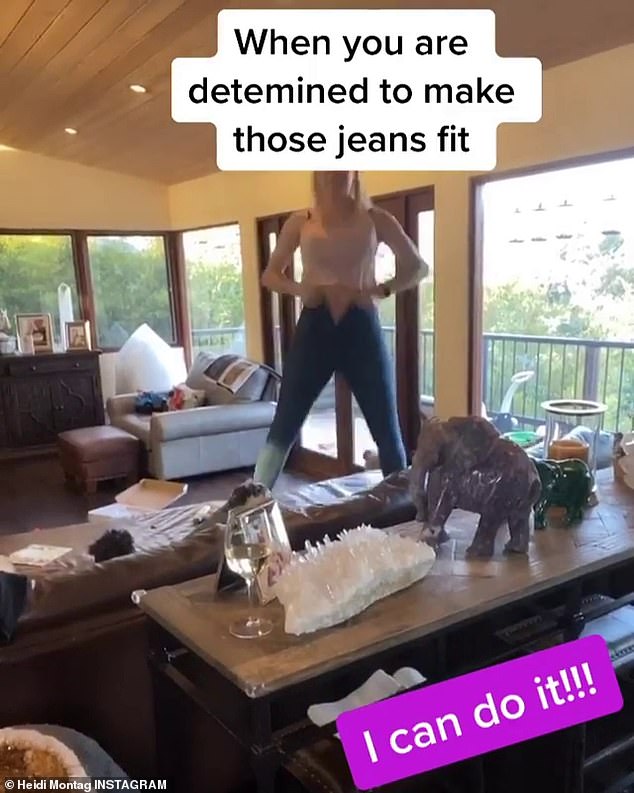 Ordinarily, TikTok videos are about issues which are not particularly serious

Dr Rangarajan says his videos also serve the crucial purpose of inspiring the next generation of doctors. A 2018 report found that the UK has nearly a third fewer doctors for its population size than the European average. ‘My aim is to try to inspire people to consider medicine as a career,’ Dr Rangarajan says. ‘I’ve had hundreds of comments on my videos from teenagers and kids saying they want to become a doctor or a nurse, or go into science.’

Even complex medical research is engaging unprecedented numbers of TikTok users. Dr Austin Chiang, a gastrointestinal doctor based in the US city of Philadelphia, uses a unique combination of disco-dancing, camera trickery and jargon-busting to talk to his 176,000-strong audience about Covid-19 drug treatments. He also explains flaws in studies and the science behind the headlines.

Medical influencers on other social-media platforms such as Instagram and Twitter are not new. But few rake in such astronomical viewing figures and followers in such a short space of time.

So what is the secret to making medical information go mainstream on TikTok? The platform’s short and snappy nature is key, says Dr Rangarajan. ‘It has to capture the audience in the first three to five seconds,’ he explains. ‘Videos that are weird or relatable are often popular – and using strange expressions also seems to help.’

Some doctors think it’s easier to go viral than on other sites – because the site recommends unknown, new videos to users. ‘It pushes your videos in front of people who might otherwise not have been following you,’ Dr Chiang says. ‘They can go viral in an instant.’

Dr Smith says the secret of her TikTok success is making people feel a human connection. Users can comment on what the doctor is saying in real time, allowing them to react instantly to a comment.

‘People want to feel heard and validated,’ she says. ‘When I speak about something like depression, people comment and say – yes, that’s me. It makes them realise they are not alone in this, other people experience these feelings too. It helps them feel understood.’

All the medics stress that, while TikTok might be useful during lockdown, it’s not a replacement for the real thing. ‘It’s hard to fully explain the nuances of medicine in a 15-second clip,’ says Dr Chiang.

And Dr Smith adds: ‘I have to be clear, I can’t provide therapy on social media. These educational tips are one small slice of what a full package of therapy might be.

‘I hope each video can be valuable to someone.’

The pals teaching thousands how to live with Type 1 diabetes

It’s not just medical professionals who are nursing the nation’s health on TikTok, writes Lynne Wallis.

University students Beth McDaniel and Ellen Watson, both 20, from County Down in Northern Ireland, began sharing upbeat videos about living with type 1 diabetes at the end of last year.

Soon, each clip was raking in thousands of views. 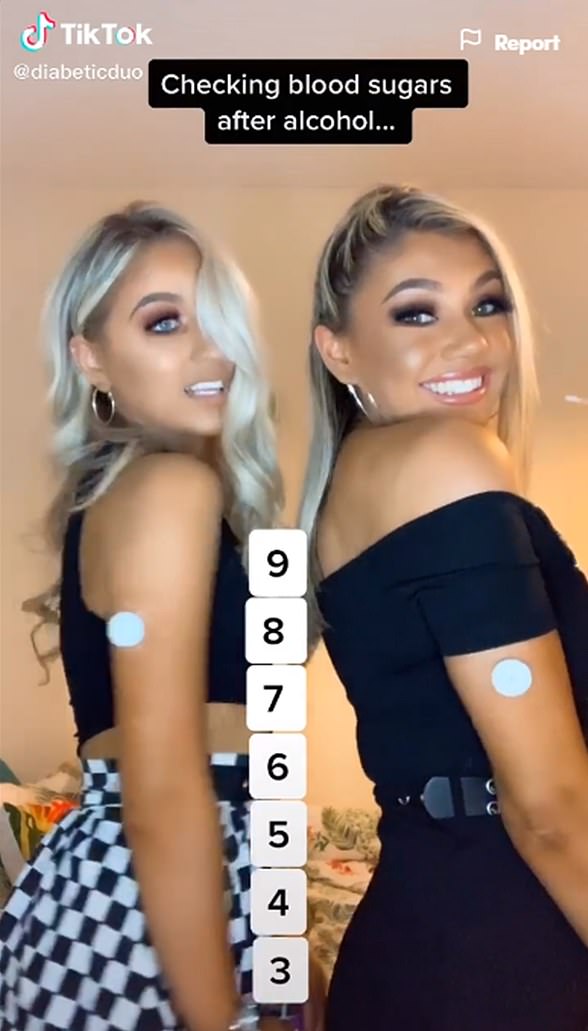 University students Beth McDaniel and Ellen Watson, both 20, from County Down in Northern Ireland, began sharing upbeat videos about living with type 1 diabetes at the end of last year

In one particularly popular video, the pair dance around, dressed for a night out.

But one thing sets them apart from other, typical students – the tiny, white patches attached to their upper arms, used to manage their type 1 diabetes.

The white patches are monitors, which can alert them if their blood sugar gets too low, which puts them at risk of potentially fatal collapse.

Their video has been watched 700,000 times, sparking conversation among curious viewers as to the function of the plastic stickers.

The pair, who met at school when they were five years old, now use their platform to raise awareness of the disease, posting under the user name @diabeticduo.

Clips feature the two women, who are studying at Ulster University, injecting insulin into their arms in public, and while doing unusual activities, such as hula-hooping. Beth says: ‘We want to change how people think about this disease.’

Ellen was diagnosed with type 1 diabetes when she was six, after it was noticed that she was fatigued, thirsty and losing weight.

Beth was diagnosed last year. ‘It shouldn’t be something you have to hide away,’ says Beth. ‘We’re proud of our discs.’