The cost of UK car insurance has shot up, but most motorists are still clueless as to why they could be paying over the odds.

Today, seemingly arbitrary factors such as your marital status or job title can cause your premium to spike.

Young drivers are now quoted massive premiums much higher than what their cars are worth, while being the innocent party in a car park prang means you will also end up paying more.

Premium punishment: Hayley Round, 24, of Solihull, was shocked to discover it would cost her £4,000 to insure her first car — a £7,500 used Renault Twingo

Consumer experts say the way that motor insurance premiums are calculated has become far from clear — and fair.

City regulator the Financial Conduct Authority (FCA) is also concerned and last year launched an investigation into how insurers are pricing their premiums.

Recent figures from the AA show the five most affordable comprehensive motor policies have increased by 23 per cent in the past three years — from an average of £494 in 2015 to £610 at the end of last year.

Automatic renewal quotes are rarely lower than the previous year’s premium, and if we do not accept them, we have to go through the rigmarole of a price comparison website.

He says: ‘We can see what questions we’re being asked, but it’s not clear how these are being used to generate a price — or what other factors they are taking into account.

‘There are no real boundaries around what’s fair — so we’re increasingly seeing insurers take questionable decisions on pricing.’

Today, Money Mail looks at the nonsensical world of car insurance and investigates what could cause your premium to shoot up.

Premium doubled to £1,500 after someone else hit us

An accident that is not your fault can see you paying around 10 per cent more. The average top five premiums for someone with no claims or convictions is around £700 a year, but this will increase to just over £777 after a not-at-fault claim, according to figures from GoCompare.

Providers say that even if you are not responsible, your claim means you are more likely to make another one.

Retired executive Harvey Rose, 84, says he was baffled when his premium doubled to £1,500 after an accident he could not have avoided.

Harvey had insured two cars with Admiral for £732.42 in 2016, but after a driver crashed into his wife’s vehicle at a roundabout, their premium shot up to £1,520 in 2017 — despite the other driver admitting liability.

Harvey says: ‘I was outraged at the thought of a no-fault accident affecting my premium.’

He says Admiral suggested it could reduce the premium if Harvey removed a nominated driver from the policy — either him or his wife.

Harvey says this was ‘nonsense’ because, when he took out the insurance a year earlier, Admiral offered him a discount for adding a second driver to the policy.

He says: ‘When I asked Admiral to explain the contradiction they replied that now I was in a different category as an existing customer.

So, as a new customer, they give a concession for having a second driver but as an established customer, it costs you more.’

Mike Powell, of ratings website Defaqto, says although you are not at fault, your insurer still has to pay for repairs, and if you do not know who damaged your car it cannot recover the cost.

But Martyn James, of complaints website Resolver, says: ‘Being charged more after a no-fault claim is as unfair as seeing your life insurance premiums increase after being struck by lightning. The industry needs to stop blaming innocent drivers for random acts and focus on rebuilding their reputation with customers.’

An Admiral spokesman says it could find no record that Harvey was offered a discount for adding a second driver.

But he adds: ‘We may have considered Mrs Rose as a lower risk originally. Following the accident in 2016 she was rated as a higher risk, which increased the premium.

‘By removing Mrs Rose as a named driver from one of the cars, we were able offer a lower overall premium for the two cars.’ 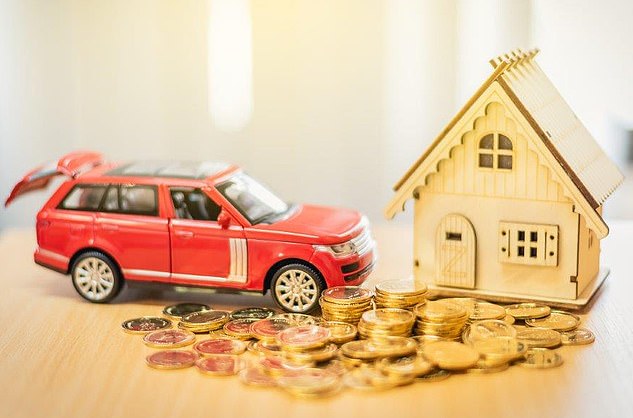 Some insurers say married people are less likely to claim — and price premiums accordingly. Insiders suggest firms believe divorcees are more likely to claim after an accident as the break-up may mean a drop in income.

The cheapest five policies for a divorced 30-year-old woman living in a Cardiff flat are an average of just over £485 a year. But if the same woman is married she would pay just £433 a year — £50 less.

If she added her husband to her policy, it would reduce her premium to £390.

Photographer Gareth Johns, of Cardiff, says insurers discriminate against divorcees. He asked Tesco car insurance on Twitter: ‘Why are you discriminating car insurance users on their relationship status? Why does being married or divorced change the premium for a single-driver policy?’

He told Money Mail an insurer quoted him £126 more a year for being single rather than married, and £82 more for being divorced.

Experts say there are reasons why insurers might see single and divorced people as more of a risk — and these assumptions are perhaps discriminatory.

James Daley says: ‘Who knows why there is a statistical link that divorced people have more accidents. It would be easy to posit some theories — some of which might cause offence.

‘The question is, does society feel comfortable with insurers taking our marital status into account when pricing insurance?

For me, the answer is a firm no. We wouldn’t tolerate them pricing our car insurance based on our sexuality — it would be against the law. Pricing on marital status is one step away from that.’

The Association of British Insurers (ABI) says insurers will only ever use information to change the price of an insurance premium if they have ‘steadfast statistical evidence that it has a notable impact on risk’.

It says insurers have found that, based on years of claims, single drivers are more likely to make a claim on their insurance and are therefore sometimes charged more than a person who is not single. 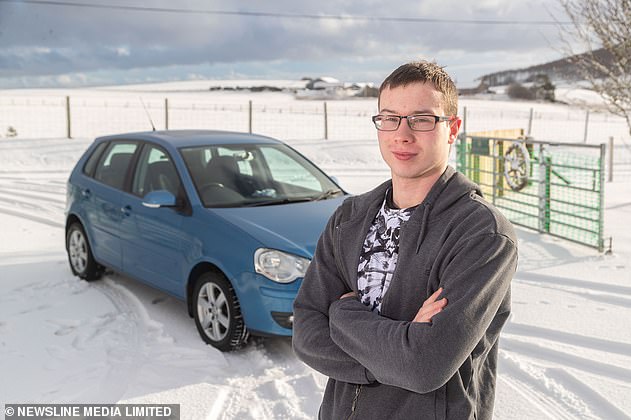 When Stuart Killoh, 19, from Banff, tried to insure his Volkswagen Polo, he was quoted more than £2,000

Regardless of your driving skill, your age is almost always used by insurers to price your policy.

Younger drivers are seen by insurers as statistically more likely to have a crash, and therefore are charged thousands of pounds — often much more than their first car is worth.

The top five most affordable premiums for a 17-year-old from Cardiff driving a Vauxhall Corsa average at £4,372.

Now many drivers, particularly the young, are being forced to equip their cars with ‘black box’ monitoring devices to lower their premium.

A black box, or telematics policy, sees insurers monitor your speed, distance and the time of day you get behind the wheel.

Some insurers will adjust your premium based on whether you stick to speed limits, while some may charge a higher fee if you want to drive between 10pm and 5am.

Others will have mileage limits, starting from around 5,000 miles a year. You might be charged a fee if you go over the mileage limit, but some providers may offer bonus miles if you drive safely.

When Stuart Killoh tried to insure his Volkswagen Polo, he was quoted more than £2,000.

His parents bought him the car just before his 17th birthday, but he was shocked to learn how much it would cost to drive.

Stuart, 19, a labourer from Banff, Aberdeenshire, says: ‘I was told it would be expensive to get insurance, but I had no idea it would cost that much.’ He found a cheaper quote for £1,594 with Co-op Insurance.

Believing he was a careful driver, he got a black box installed. When the time came to renew his policy, the price had dropped by 42 per cent to £926.

Hotel worker Hayley Round was shocked to discover it would cost her £4,000 to insure her first car — a £7,500 used Renault Twingo.

She says: ‘I was working full-time but there is no way I could have afforded that. I had no experience but the cost seemed very unfair.

‘I am a careful driver, but I was being punished because some other young drivers are not.’

Hayley, 24, also fitted a black box after taking out a £1,800 policy with Marmalade Insurance for young drivers in June 2017.

A year later, her premium had come down to £1,200 because the black box deemed her a sensible driver.

Martyn James believes it is unfair that young people are ‘tarred with the same brush’. He says: ‘Insurers will say young people are more likely to damage themselves and their cars, but many will also drive sensibly. This one-size-fits all approach is not fair.’ 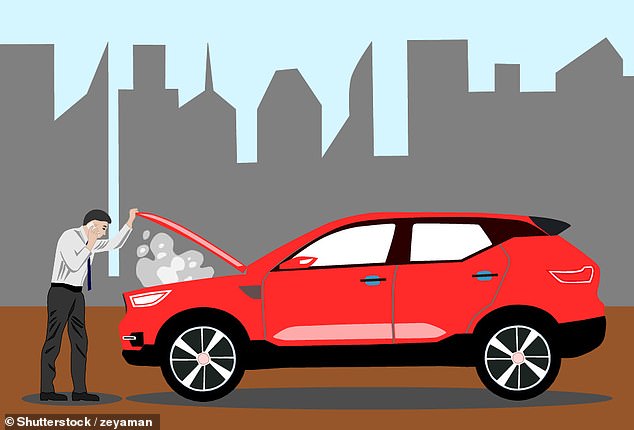 Every year insurers increase premiums, sometimes by hundreds of pounds, despite customers reporting no change in circumstances

Timing affects the quotes you get

Insurers will offer cheaper quotes to customers they view as less of a risk. So if you buy your car insurance before it needs to be renewed you will be judged as a more organised, and probably safer, driver.

An investigation by MoneySavingExpert suggested 21 days before renewal is the cheapest time to get your car insurance. You could expect to pay £587, on average.

Industry insiders also suggest 8am is the cheapest time to buy.

Money Mail research has found that premiums can be higher on a Saturday as more people are looking for quotes that day.

A job title can cost you more

Industry experts say it does not make a difference if you use your car for work or not. It is your job title that makes you more or less risky.

You could also find yourself charged hundreds more if you use slightly different wording in your job description.

Call yourself a barber and you could pay around £1,129 a year to insure your car. But if you describe yourself as a hairdresser this drops to £820 — a saving of £309.

Sports professionals are considered to be a high risk. Insurers say that they are often young, drive expensive cars and could be more at risk of vandalism. This is factored into the premium, the average being £3,466.

Mature students, waiters and fast food proprietors are also among the occupations which are usually charged high premiums.

In contrast, nurses, local government officers and retirees will pay the lowest.

Mr Daley says: ‘We need to draw clearer boundaries around what it’s OK for insurers to base their pricing on. The lack of transparency is at the heart of why this is one of the least trusted industries in the UK.’

Loyalty simply does not pay – so compare prices

Money Mail has consistently called for an end to loyal customers being ripped off. Insurance firms save their cheapest deals for new customers to entice them into signing up.

But every year they increase premiums, sometimes by hundreds of pounds, despite customers reporting no change in circumstances.

Some 57 per cent of motorists who renewed policies between October and December saw their price go up by £48 on average, according to comparison site Confused.com.

The FCA is investigating how home and car insurers charge customers after becoming concerned about hidden pricing practices.

An ABI spokesman adds: ‘Factors insurers use to price insurance will vary, but they do not ask for, nor use, this information for the sake of it.

‘Millions of consumers benefit from insurers’ ability to price products accurately and in line with risk. As with any competitive market, shopping around is important.’