How to Lose A Stone in 21 Days: Diabetes spurs on teacher, 34

A teacher who weighs 14st 3lbs has been left stunned after being told she was at ‘serious risk of developing diabetes’ after gaining 9lbs during lockdown.

Katie Holmes, 34, appears on the new Channel 4 documentary How to Lose A Stone in 21 Days, which airs tonight at 9pm, as she desperately tries to shift the weight gained from staying at home with her family during the coronavirus pandemic.

After a series of intense health checks with Dr Michael Mosley at his clinic in Buckinghamshire, she is horrified to learn that she is prediabetic, revealing: ‘If I continue to eat the way I’ve been eating, and snack the way I’ve been snacking, it’s going to be a downward spiral for me.’

The doctor advises her that she adopt an 800 calorie diet, and ditch her biscuit habit, telling her: ‘These are really stark horrible numbers. It’s a bit shocking but I do believe we’ve caught it at the right time, and we can change it.’

Teacher and mother Katie Holmes, 34, is left stunned after joining Dr Michael Mosley at his clinic in Buckinghamshire and learning she is prediabetic during Channel 4’s  How to Lose A Stone in 21 Days

Katie, who is one of five volunteers who appear on the programme, admits she had spent the last few months indulging during the coronavirus lockdown.

She joins Dr Michael Mosley, creator of the 5:2 diet, at his clinic in Buckinghamshire to help transform her lifestyle and lose weight.

She blames the weight gain on having to adjust to spending all day with the family, rather than completing her usual school routines. 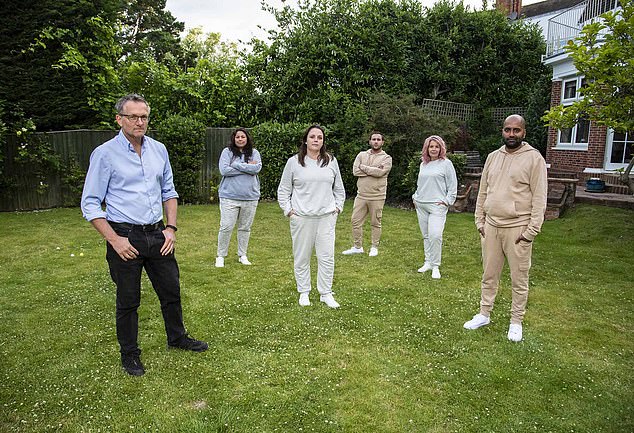 ‘I want to set a good example to my children, I want to be there for them in so many years time. I don’t want to be unhealthy and not be around for that.’

The volunteers had a range of blood tests, and then have a full health test to find out exactly what lockdown damage needs to be undoing.

Many more people have blood sugar levels above the normal range, but not high enough to be diagnosed as having diabetes.

Prediabetes is where blood sugar levels are abnormally high, but lower than the threshold for diagnosing diabetes.

If your blood sugar level is above the normal range, your risk of developing full-blown diabetes is increased.

It is estimated that around 5-10% of people with prediabetes will go on to progress to “full-blown”diabetes in any given years.

It’s very important for diabetes to be diagnosed as early as possible because it will get progressively worse if left untreated.

They are assisted by Michael, as well as his GP wife Claire, who is also on hand to help out with the experiment.

Tests include whether they are at risk of any severe conditions like type 2 diabetes.

Meanwhile another test also checked for asthma and blood pressure, before they go on to be  weighed.

After studying the numbers, Dr Mosley admits he is ‘shocked’.

He reveals: ‘I think when I tell them, some of them are going to be deeply, deeply shocked because in some cases, the figures are much worse than I feared.’

He says: ‘We’ve got one person who is well on the road to diabetes and there is also an extraordinary high cholesterol between this lot.

‘If they continue down this road, they could become seriously ill in the future because they’re carrying too much weight, particularly around the gut.

‘And they’re young and already their bodies are screaming at them, “This is not good”.

‘There are a few cases where we urgently need to do something about their lives.’

Meanwhile Katie says she is determined to change her life for her children, revealing:  ‘Family are everything to me,  they’re my life.

She adds: ‘I want to demonstrate for them what a healthy lifestyle is.’

Dr Michael gathers the group in the garden, thanking them for taking part in the experiment before explaining: ‘The broad reality is that all of you fall into the obese category.

‘All of you have a BMI over 30, apart from Aiden That puts you at significantly higher risk for a number of things. Good thing we’re going to get it down.’ 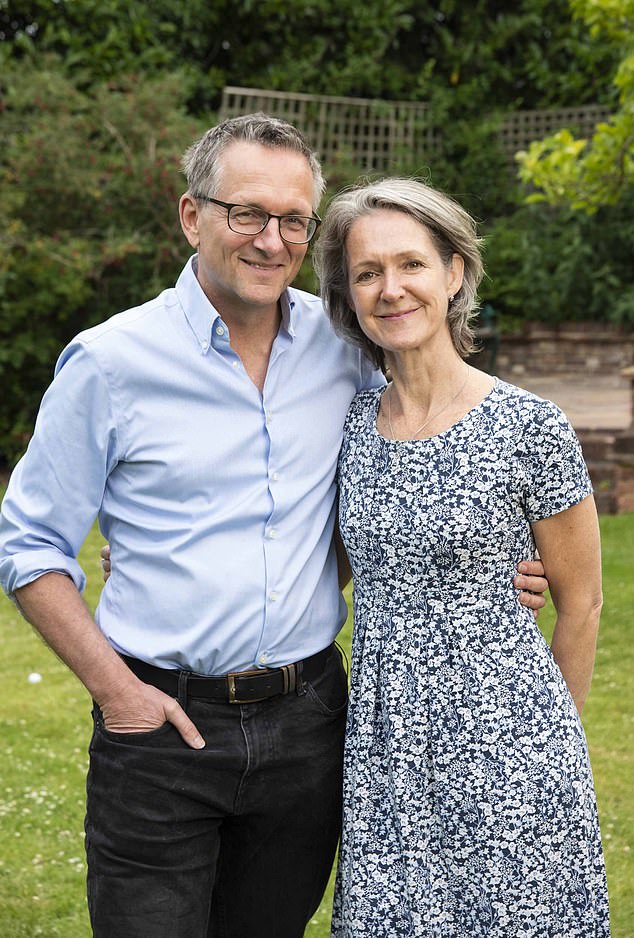 Dr Michael recommends the volunteers follow a diet of 800 calories each day in order to shed their weight, while his wife Claire builds meal plans for the group

Meanwhile he goes on to tell Katie: ‘Looking at your blood, the most striking thing is your blood sugars are raised.

‘You’re in the prediabetic range. There’s a serious risk you will progress into type two diabetes.

‘That will knock ten years off your life, double your risk of dementia, double the risk of heart disease, all sorts of big things. It increases your risk of amputation by 17 fold.

Patients with Type 2 diabetes are twice as likely to die from coronavirus – and being obese increases the risk even further, research reveals today.

A third of deaths from the virus have occurred among individuals with diabetes, which is linked to excess weight and a lack of exercise.

The study by the NHS and Imperial College London also found that those with Type 1 diabetes –which is not linked to obesity – were three and a half times more likely to die.

The findings provide further evidence that certain groups of patients are at much higher risk of suffering fatal complications.

‘It’s something you can avoid and you can do it.’

He adds: I don’t want to make you worried but I want you to be motivated.’

Katie says it is ‘a huge motivation’, admitting: ‘I was feeling a little bit shocked actually.

‘I wasn’t expecting to hear prediabetes. I think I associated it with much more obese people, much older people, so as a 34-year-old that’s not what I wanted to hear.

Michael explains: ‘The reason we’re doing this is not to do with vanity but entirely to do with your health. But it’s going to be a tough old job.

He tackled diet by proposing to ditch the comfort food and instead eat just 800 calories each day with a meal plan high on protein and low in carbs.

He says: ‘What I want to do is to stop you burning primarily sugar and to get you burning fat.

‘But if you eat the right stuff,  then it is a really rapid way to recharge and change things and what is amazing is in a very short period of time, you’ll stop feeling hungry.’

For Katie, it’s the biscuit habit that needs to be kicked with Dr Michael asking her to ditch all the sweet treats from her home.

He asks her to stamp on the biscuits as a symbolic gesture, explaining: ‘The reason I asked them to do this is  to remove temptation. if you leave tempting things on the surface, the more you see them, the more likely you are to eat them.

‘It’s the first rule of dieting – get them out the house.’ 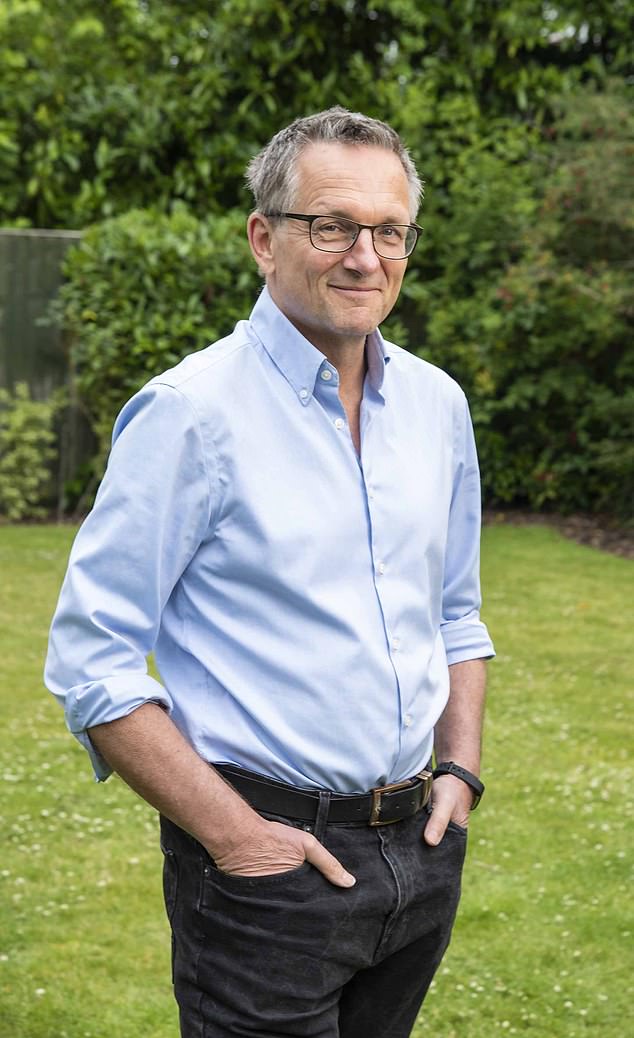 During the first week of the experiment, Katie admits she is surprising herself with how much she is enjoying the food.

But she also reveals she has been suffering dizzy spells at the end of the day, revealing she is missing her usual habits.

She explains: ‘Normally I come down and have a big milky cup of tea with loads of biscuits to get me through till breakfast.’

She adds that she is desperate to see the results of her diet effort, saying: ‘I’ve always had excuses in the past as to why I haven’t stuck to diets. Being a mum, being busy, being tired.

‘And I feel like now really is the time to change. hearing my health had been affected so badly gave me the motivation i needed to get on and change.’