The late-night capital of Europe: Revel in Madrid’s darker side, from an evening walking tour to a 24-hour chocolate shop

Every week our Holiday Hero Neil Simpson takes an in-depth look at a brilliant holiday topic, doing all the legwork so you don’t have to. This week: minibreaks in Madrid, the late-night capital of Europe.

But locals say their city only really wakes up when the sun goes down, so it’s no place for travellers who like early nights. Here’s how to make the most of Madrid up to – and after – midnight.

Locals say Madrid only really wakes up when the sun goes down, so it’s no place for travellers who like early nights

START WITH THE ART: Madrid doesn’t have a tradition of regular late-night openings at its big museums. But it does offer free entry if you go in the last few hours before closing. Tickets for the world-beating Prado, with its Goyas, El Grecos and Titians, cost £14 in the day. But fees are waived between 6pm and 8pm Monday to Saturday and from 5pm to 8pm on Sundays. Or check out Picasso’s Guernica and the Dali, Le Corbusier and other collections at the Centro de Arte Reina Sofia. Daytime tickets cost £9 but entry is free between 7pm and 9pm every day except Tuesday and Sunday.

GET ON THE MOVE: Daytime walking tours can be uncomfortably hot in Madrid right into the autumn. So the two-and-a-half-hour Walking Tour At Night from introducingmadrid.com (£6.40) can be a more pleasant experience. The tour starts at 9pm three times a week – and over-18s with tour tickets get free entry to selected city centre clubs after the walk. If you want to cover more ground as the light fades, then pull on the high-vis jacket supplied with a two-hour guided Segway tour starting at 8pm, bookable through getyourguide.com (£28). Or follow an actor in gothic dress on a ‘horrible histories’ style Ghost And Spanish Inquisition tour from 8.30pm with mysteriumtours.com (£18).

TAKE TO THE ROOF: Madrid is a city of rooftop bars and restaurants and they fill up fast just before sunset and stay busy till the early hours. Most city-centre hotels have roof space for guests and visitors. Radio restaurant at ME Madrid Reina Victoria is open until 3am, or sit by the pool on the tenth floor of the Emperador hotel (sunset guided tours take place on Wednesdays) where the Sky Bar is open until 2am. 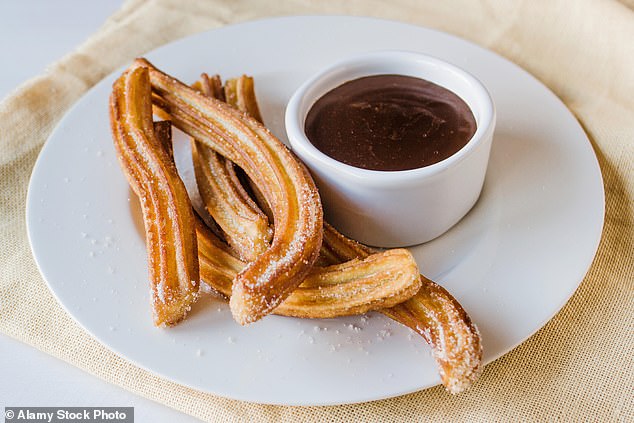 Grab a late-night hot chocolate and churros, above, at Chocolateria de San Gines 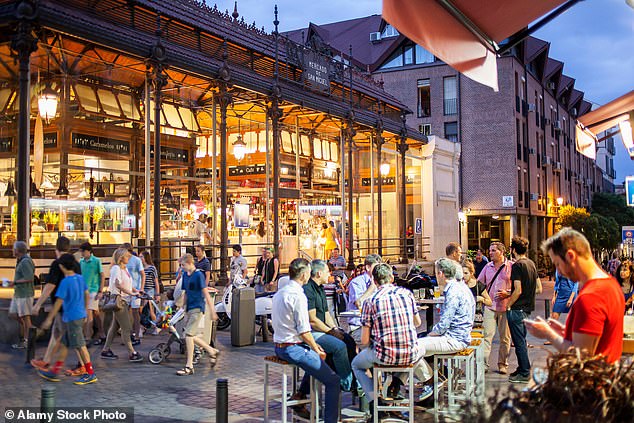 GRAB A MIDNIGHT SNACK: Restaurants open late and take last orders into the small hours, so you’re unlikely to go hungry in Madrid. Start your night with a three-hour evening wine tour with secretfoodtours.com that includes four different venues and seven wine tastings (£44). Then go it alone and visit the 100-year-old cast-iron Mercado de San Miguel, the city-centre food market where stalls sell Iberian ham, bread, perfect pastries and more till midnight in the week and 1am at weekends. Too early? Head to the even more historic Chocolateria de San Gines. It’s been selling hot chocolate and churros since 1894 and is open 24 hours.

DANCE TILL DAWN: Locals call themselves ‘los gatos’ – the cats – because they like to stay out all night. So the city is perfect for bar-hopping and clubbers. It has plenty of world-famous mega-clubs such as Fabrik and Teatro Kapital. But look at timeout.com/madrid for each week’s most cutting-edge venues.