How to make the tastiest carbonara yet

A home cook has revealed his simple recipe for chicken carbonara and says the incredibly mouthwatering and creamy dish will feed 10 with ease.

The recipe was shared on the slow cooker recipe Facebook page where the home cook described the pasta dish as ‘perfection’.

‘So simple and delicious,’ he wrote alongside photos of his oozing creation.

The recipe can be reduced in size but the home cook revealed he does shift work and enjoys taking frozen meals with him.

To make the dish at home you will need a six-litre slow cooker as well as chicken, bacon, an onion, pasta and three cans of cream of chicken condensed soup.

To create the recipe at home you must first add the chicken, onion, bacon, mushrooms, stock cubes, soup, garlic and cream into your slow cooker.

This is to be cooked on low for four hours before the pasta is added.

Then it needs to be cooked on low for another hour and a half until the pasta is ready. 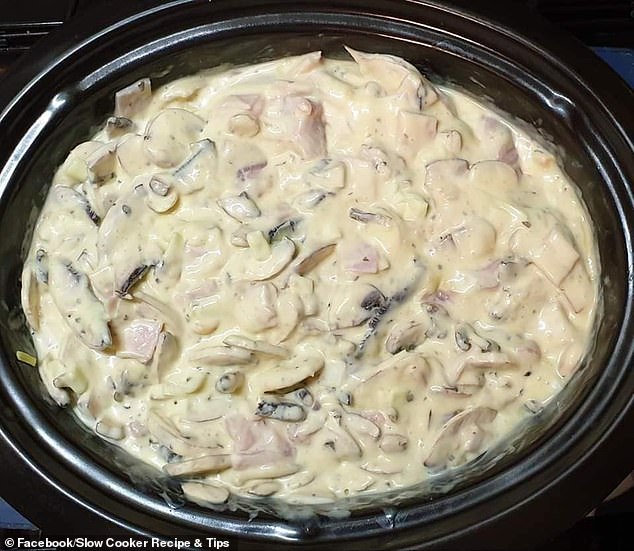 How can I make the creamy chicken pasta at home?

Pour all of the ingredients, except the pasta, into your six-litre slow cooker and stir to gently combine.

Cook on high with the lid on for four hours.

Add in your pasta, stirring gently.

Cook on low for a further 90minutes. Serve once pasta is cooked to your liking.

‘It was divine, everyone loved it,’ the cook said.

Hundreds of people liked, shared and commented on the post – excited to try it at home.

While others agreed the recipe looked good but wasn’t carbonara.

‘Can we call it creamy chicken pasta instead because this is nothing like carbonara,’ one woman said.

Others said they managed to fill ten large bowls using the recipe.