‘Were going to go in with some water and were just going to let it simmer and bubble away for 10-15 minutes,’ she said.

While the rice is simmering, Sarah starts to make the ‘really, super easy, cheat satay sauce’.

She toasts peanuts in a fry pan for three to four minutes and chops the nuts up finely. 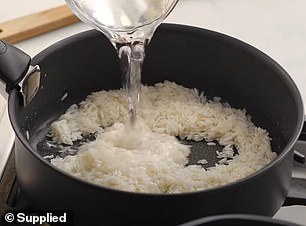 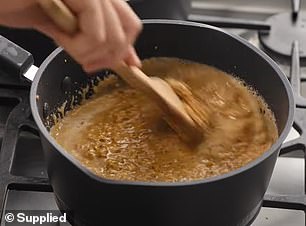 Sarah starts by adding rice and oil to a fry pan, fills it with water and leaves to simmer for 10-15 minutes then for her ‘cheat’ satay sauce, she chops toasted peanuts up and combines them with spices and coconut milk

After turning off the heat on the stove to let the rice steam, Sarah puts her chopped peanuts into a hot saucepan with oil, adds curry power, brown sugar and one of her ‘favourite ingredients ever’ tamarind puree.

Next Sarah gives the peanuts a good stir to combine the spices, adds coconut cream, leaves to simmer, seasoning with a ‘generous amount’ of  salt to taste

Once the rice is done, Sarah seasons it with salt and adds coconut cream and stirs to combine.

To add freshness to the dish, the chef cuts up cucumber and red onion to serve.

For the plating, the celebrity chef places two pieces of KFC chicken into a bed of coconut rice, drizzles satay sauce over the top, places the salad on the side and garnishes the dish with a few slices of chili and coriander leaves.

‘Sweet, savoury, spicy – it’s all of it,’ Sarah finishes. 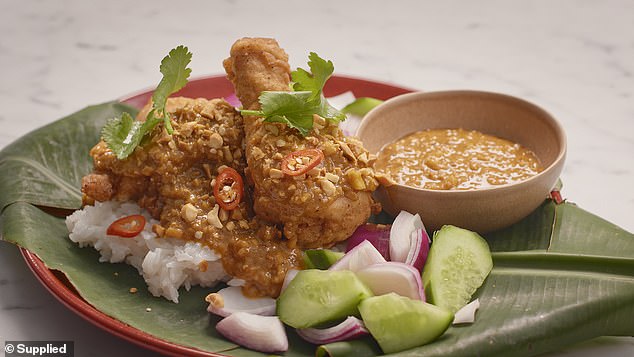 For plating, Sarah places two pieces of KFC chicken into a bed of coconut rice, drizzles satay sauce over the top, places the salad on the side and garnishes the dish with a few slices of chili and coriander leaves

For the satay sauce:

For the coconut rice:

1. In a dry frying pan on medium heat, toast the peanuts for 3-4 minutes. Then chop the nuts finely

2. Heat the oil in a pan on medium heat. Then add peanuts, curry powder, tamarind puree and brown sugar, stirring for 1-2 mins.​

3. Mix in coconut cream and bring to a simmer. Cook for 4-5 mins and season with salt to taste.​

1. Soak the glutinous rice in water for 30 mins, then rinse and drain. ​

4. Turn off the heat but keep the lid on and allow rice to steam for another 5-10 mins.​

5. Transfer rice to a bowl, mixing in salt and coconut cream.​

Sarah created the recipe as part of KFC Australia’s Kentucky Fried Cookin’ series that has featured a number of Masterchef stars.

While the dish may look worthy of a five-star restaurant, the 27-year-old, from Sydney, has made it easy for anyone to replicate in a few simple steps. 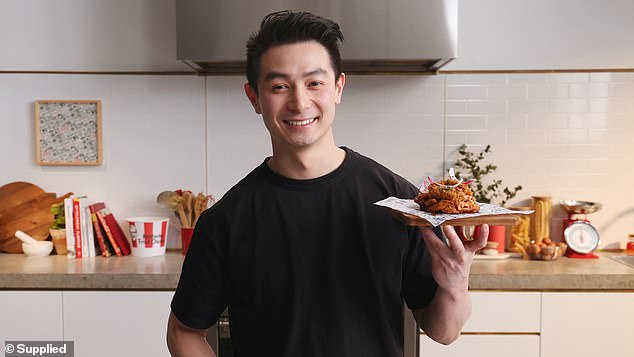 In a saucepan, he added white wine vinegar and caster sugar.

‘Give the pickling liquid a good swirl to make sure you dissolve all that sugar.’

Once it’s boiling, he poured the mixture into the jar.

‘Let that sit in liquid for a good 30 minutes.’

For the pickled onion:

1. Cut onions into wedges of eights and pull the layers apart, discarding the outer skin and root. Place them in a mixing bowl.

2. Place vinegar and sugar in a saucepan and bring to a boil.

1. Shred the cabbages and carrots and place them in a mixing bowl with the mayo, spices, salt and pepper until mixed through.

1. Place a croissant in a waffle maker and press down, cooking it until crisp on the edges.

2. Pull apart the Wicked Wings and discard the bones.

1. Place the croffle on the plate, then add a layer of coleslaw on top.

2. Add in pulled wings, a few layers of pickled onion, sprinkle with parsley and lastly drizzle with maple syrup. 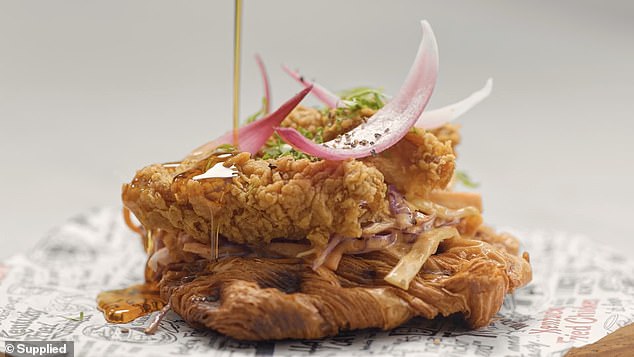 The next step is to prepare the coleslaw. Reynold finely sliced the cabbage and carrots before adding them to a bowl.

To make the ‘croffle’, he simply placed a croissant into a waffle maker. If you don’t have a waffle maker, you can also cook your croissant on a dry pan over medium heat. Just press down until both sides are nice and caramelised.

‘Meanwhile while the croffle is cooking, we’re going to start chopping our Wicked Wings and making it boneless,’ he said.

‘Chop the wings right down the centre, just where the joints are together and separate the bones, you get this nice, beautiful, crispy, chunky bit of meat,’ he said.

To assemble, he placed the crispy croffle on a plate, topped with the coleslaw, fried chicken, parsley, pickled onions and drizzled maple syrup over.

‘There you have it guys, this is looking absolutely delicious,’ Reynold said, adding: ‘I can’t wait to tuck in.’