How to plan a Croatian island-hopping adventure

Hop your way to a heavenly holiday on Croatia’s isles

If an island-hopping holiday calls to mind images of dragging a rucksack on to a Greek car ferry as an impoverished student, it’s time to think again. Island-hopping just across the Aegean Sea off the coast of Croatia is far more civilised.

Croatia’s new generation of catamarans are big, reliable and fast. They come with air conditioning, cafes and the kind of legroom that puts airlines to shame.

The routes and timetables allow you to plan a perfect week’s holiday, perhaps staying for two nights on three different islands, with a final night on the mainland before flying home.

Start the dream itinerary with an early-morning flight to Dubrovnik. Hop on a transfer coach outside the terminal (£8, pay the driver) and you’ll be at the port in time for a lazy lunch (with a view of super-yachts, some with helipads).

Then board the mid-afternoon catamaran up the coast. It takes about an hour to get to its first stop – the long, thin island of Mljet. If you stay in the second port, Pomena, you’re in the middle of a huge national park. Rent bikes, pack a picnic and cycle round an inland lake to find a spot to swim and spend the day in the sun.

After two nights on Mljet, the catamaran is back in the late afternoon for a half-hour hop to the busier, but still little-known island of Korcula. The tree-lined promenade circling the old town is almost too perfectly preserved to be true.

Every restaurant has outdoor tables overlooking sparkling seas. For something different, climb the tower at the Massimo cocktail bar where drinks come up from the ground floor on a rope lift.

Next up is the two-hour catamaran ride to Brac. You arrive in the early evening in time to see an outdoor film, in English, under the stars in Bol harbour. 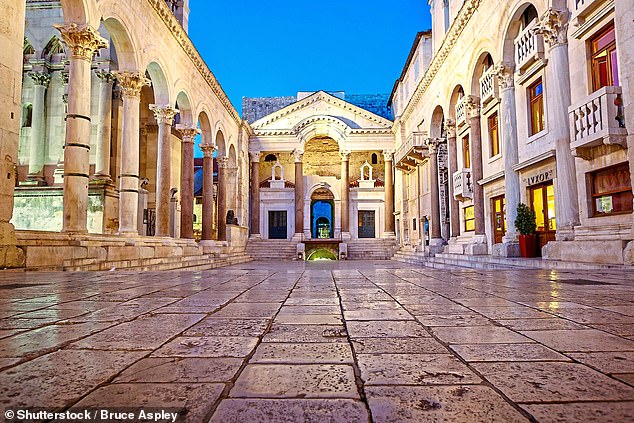 Imposing: The Roman grandeur of the Diocletian Palace in Split

Next day, take a boat tour to Hvar and Vis and the naturally lit blue cave in a ‘geo-park’. And don’t forget Brac’s Zlatni Rat beach, just voted No 1 in the ‘Top 50 beaches in the world’ by tour group Big 7 Travel.

The final ferry ride takes about an hour to get to Split in the early afternoon – and the city is worth at least a day’s visit.

The Roman Diocletian Palace comes alive at night. Get an ice cream and follow in the footsteps of centurions as you walk across marble flagstones after one of the most relaxing water-borne weeks Europe has to offer.

You can get September flights into Dubrovnik and out of Split with BA from £213. Or buy two single flights with airlines such as easyJet or Norwegian. Every Croatian island has apartments to rent with firms including Airbnb. Or find hotels for a fraction of the cost of Italy, France or Greece. Buy ferry tickets at the port, or book at croatiaferries.com. Tickets from £4. Accommodation and travel advice at croatia.hr.