The looks of the 1970s, like flares and tie dye, have staged regular comebacks.

But another trend of that era, surging inflation, is only now making its return, posing a threat to share values and to the fixed income payouts from government bonds, or gilts.

Is this a signal for a shift in your investment style towards a more defensive stance, especially in light of the other hazards now emerging?

Warning signs: 1970s style inflation, is making its return, posing a threat to share values and to the fixed income payouts from government bonds, or gilts

The answer is ‘yes’, although this does not require a flight into cash as it once did. Today’s fashion is for a more subtle approach – some cash, some bets on a variety of shares and maybe index-linked bonds.

The lengthening list of warning signs for your portfolio includes rising oil and gas prices, faltering Covid recovery, and the global fallout that would ensue from the failure of the gargantuan Chinese property developer Evergrande with its debts totalling £220billion.

Fantasia, another developer, defaulted this week.

This ought to be the moment when central banks such as the Bank of England and the US Federal Reserve act as the guardians of the economy, as superheroes in suits.

Yet central bank bosses remain (publicly, at least) persuaded that inflation is ‘transitory’, although labour has acquired pricing power, as economists put it, which will drive up wages.

Could this mean that the central banks mess up vital decisions on interest rates and the withdrawal of quantitative easing? Some fear this might be the case.

David Coombs, head of multi-asset investments at Rathbones, contends that ‘the chance that central bankers could make policy errors now is the highest of my working life’. 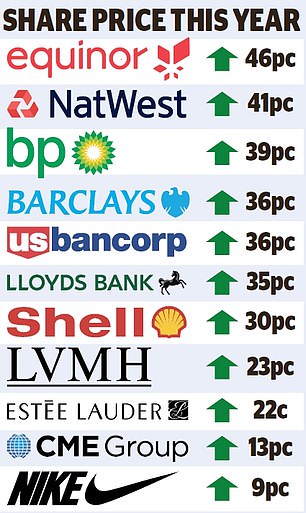 As a result, he has been repositioning his clients’ portfolios.

He says: ‘I am holding a lot of cash, some of which is earmarked to add to our tech stocks holdings when their prices fall. I am buying Tips – US Treasury Inflation-Protected Securities.’

A year ago, bank and oil shares were seen as outmoded, based on the view that interest rates would remain low and that fossil fuels would rapidly be supplanted by renewables. Coombs begged to differ then and continues to see these shares as suitably defensive.

He says: ‘Banks should benefit, so long as interest rates aren’t raised too sharply; we have bought into Northern Trust and US Bancorp.

But we also have a stake in the shares of Chicago Mercantile Exchange because this business does well when people start hedging against future price rises in commodities.’

On the basis that demand for certain commodities will be keen, Coombs has been buying into the Legal & General commodities ETFs (exchange traded funds) and Australian and Canadian government bonds. Both nations have rich mineral resources.

Coombs is also calculating that consumers may not deny themselves things that are currently in vogue, like the Tiffany necklaces sported by US Open tennis champion Emma Raducanu, for example. The jeweller is owned by luxury goods conglomerate LVMH.

He argues that consumers consider skincare from Estee Lauder and sneakers from Nike as ‘luxury staples’.

The belief in the defensive qualities of big brands also motivates the strategy of Matthew Page, joint manager of Guinness equity income fund which has stakes in Otis Worldwide, the best known name in lifts and escalators.

Page is watching and waiting for falls in the share prices of companies focusing on well-capitalised consumer discretionary, healthcare and technology sectors.

The clamour for their products will not be dented by higher inflation – and they can pass extra costs on to customers.

‘For example’, he says, ‘auto manufacturers will pay the prices that are asked for semiconductors because these are essential for vehicles.’ Electric vehicles which are surging in popularity in response to the increasing price of petrol require more semiconductors than ordinary cars.

Such is the intricacy of the task of building a defensive section of your portfolio that Ben Yearsley of Shore Capital suggests handing it over to a team of professionals.

He cites the Personal Assets investment trust which contains a mix of index-linked bonds, gold and big brand shares.

Other options if you are seeking reassurance but also the possibility of decent returns, include RIT Capital Partners, a trust with links to the Rothschild dynasty.

Its aim is ‘to deliver long- term capital growth, while preserving shareholders’ capital’ through a combination of shares in listed and private companies and hedge funds.

Another safety-first selection is the Ruffer trust which targets ‘consistent positive returns, regardless of how the markets perform’.

At present Ruffer holds Tips and UK index-linked bonds, cash, gold, plus shares in Lloyds and Natwest. BP, Shell and in Equinor, the Norwegian oil, gas, wind and solar energy group are also in the portfolio.

Whether fashionable or not, businesses that help keep the lights on, either via fossil fuels or 21st century-type renewables, should ensure that that other memory of the 1970s – the three-day week – does not make a return.

Entain makes its money from gambling – but now it is the company’s board who are being asked to take a punt on a £16billion takeover offer.

The betting giant – which owns the Ladbrokes and Coral brands, as well as a swathe of online games names such as Gala Bingo – revealed last month that it had received two approaches from US rival Draftkings, the latter pricing Entain’s shares at 2800p apiece.

Shareholders will be watching Entain’s latest trading update on Tuesday for any sign of what the company plans to do. It rejected Draftkings’ initial 2500p offer, and in its latest announcement in September said it was ‘carefully considering’ the higher bid.

But Entain has yet to show its hand, with the board simply saying that it ‘strongly believes in the future prospects of the company’.

When the firm releases its third-quarter update next week, shareholders will be watching closely to see if those prospects are coming to fruition.

Nicholas Hyett, an equity analyst at Hargreaves Lansdown, said: ‘Signs of strong progress will be welcome and might convince management to turn down the offer on the grounds that it undervalues the business.

The US joint venture with MGM in particular will be in the spotlight, since it’s probably the gem that initially interested Draftkings in the business.

The division reported net gaming revenues of $357million in the first six months of the year and, all being well, should do even better in the second half.’

Meanwhile, Entain has not decided whether to hand back furlough cash it claimed during the pandemic.