A high-flying events manager who quit alcohol after a decade of daily drinking left her struggling to get out of bed has revealed five reminders that help her stay sober.

Melissa Lionnet quit her prestigious job to coach others about the benefits of turning teetotal after her relationship with alcohol spiralled out of control.

In a recent post on her Instagram account, It’s Not Me, It’s Booze, the 33-year-old Sydneysider said while she ‘sometimes’ misses the ‘high’ associated with drinking, she has learned the hard way that the ‘peak never lasts’.

‘It creates a person that is broken,’ she added. 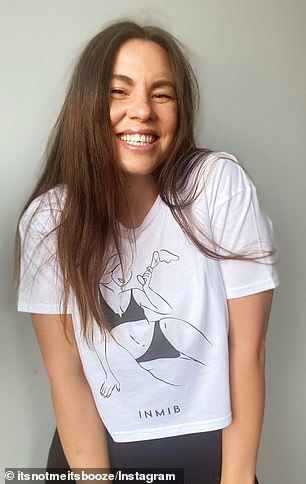 Ms Lionnet (left, in Bali in 2019, and right, almost two years sober in 2021) started drinking at the age of 15 and quickly developed a toxic relationship with alcohol

In times of temptation when she feels she could crack, Ms Lionnet said she reminds herself that alcohol decreases the strength of the ‘executive brain’ and increases reliance reliant on the ‘primal’ part, which can lead to poor decision-making.

‘You become an animal searching for your next peak,’ she said.

The life coach, who has been sober since March 2020, also thinks about the overpowering nature of addiction which makes you forget about your health and who you really are.

‘You don’t care what’s in the substances you get offered because you just want to reach that peak,’ she said.

‘Your body is hot and cold. Your eyes are fuzzy. Your mouth is dry and you can’t speak. You don’t care that your body isn’t functioning properly because you need to reach that peak.’ 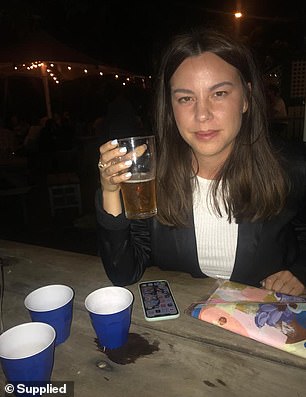 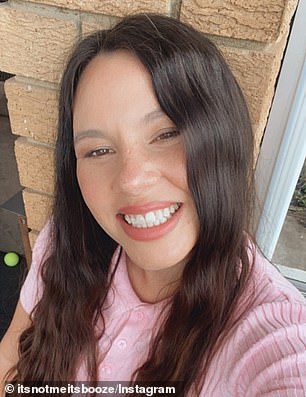 In times of temptation when she feels she could crack, Ms Lionnet (left and right) said she reminds herself that alcohol decreases the strength of the ‘executive brain’ and increases reliance reliant on the ‘primal’ part, which can lead to poor decision-making

Five reminders that will help you stay sober

When you drink alcohol…

1. You decrease the functionality of your executive brain and start listening to your primal brain. You become an animal searching for your next peak.

2. You don’t care what’s in the substances you get offered because you just want to reach that peak.

3. Your body is hot and cold. Your eyes are fuzzy. Your mouth is dry and you can’t speak. You don’t care that your body isn’t functioning properly because you need to reach that peak.

5. You become powerless and lose control. You lose your true self and become this person who doesn’t care about anything but that peak.

Source: It’s Not Me, It’s Booze

Ms Lionnet said she tries to remember the embarrassing behaviours and cringeworthy chats that come from being drunk.

‘You become powerless and lose control. You lose your true self and become this person who doesn’t care about anything but that peak.’

Her advice, which has racked up 211 ‘likes’ since it was posted online on Sunday, sparked dozens of sincere responses.

‘This is powerful,’ one woman wrote.

‘Love this, love you, I can so relate,’ said a second, while a third called Ms Lionnet an ‘inspiration’.

Ms Lionnet previously spoke to Daily Mail Australia about her toxic relationship with alcohol, which began at the tender age of 15. 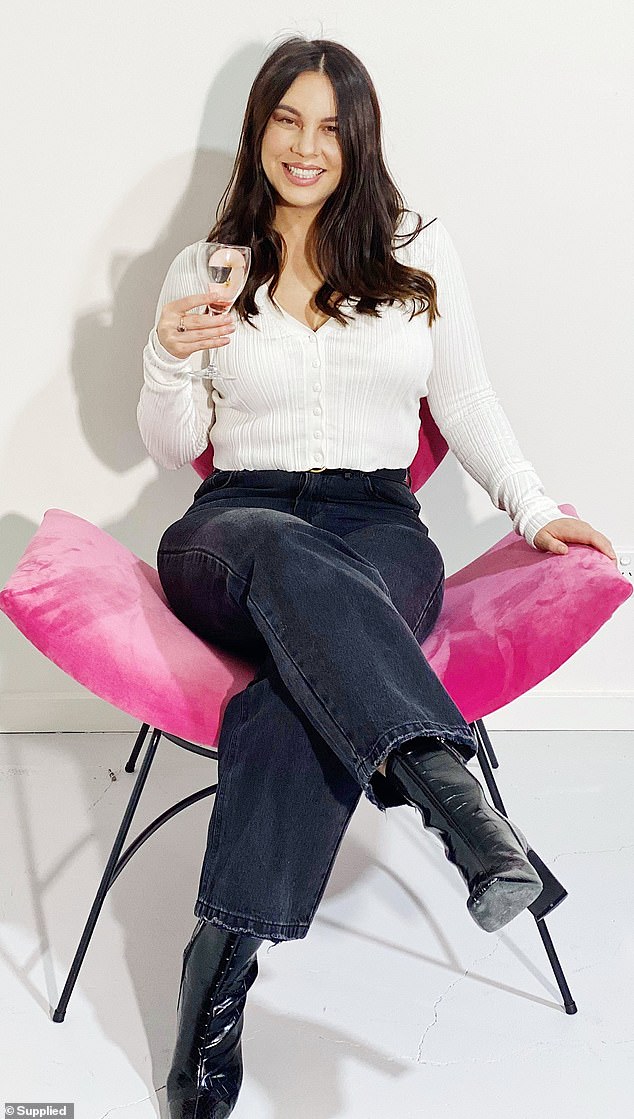 Raised by her grandmother, she said she used alcohol as an escape when she began to suffer from depression and suicidal thoughts.

Like many teenagers, Ms Lionnet started drinking with friends, but quickly found she was always the ‘drunkest one at the party’.

‘At the time it seemed completely normal, it was fun because everyone was doing it,’ she said.

Her drinking became progressively worse when she started working in hospitality and bagged a lucrative gig as an events manager, a role that involved frequent schmoozing and taking clients to functions such as the Melbourne races.

‘I was always entertaining people and it always involved alcohol,’ she recalled.

‘But when it’s part of the job you don’t see it as a problem – that was just my normal, feeling like s**t for four days a week.’ 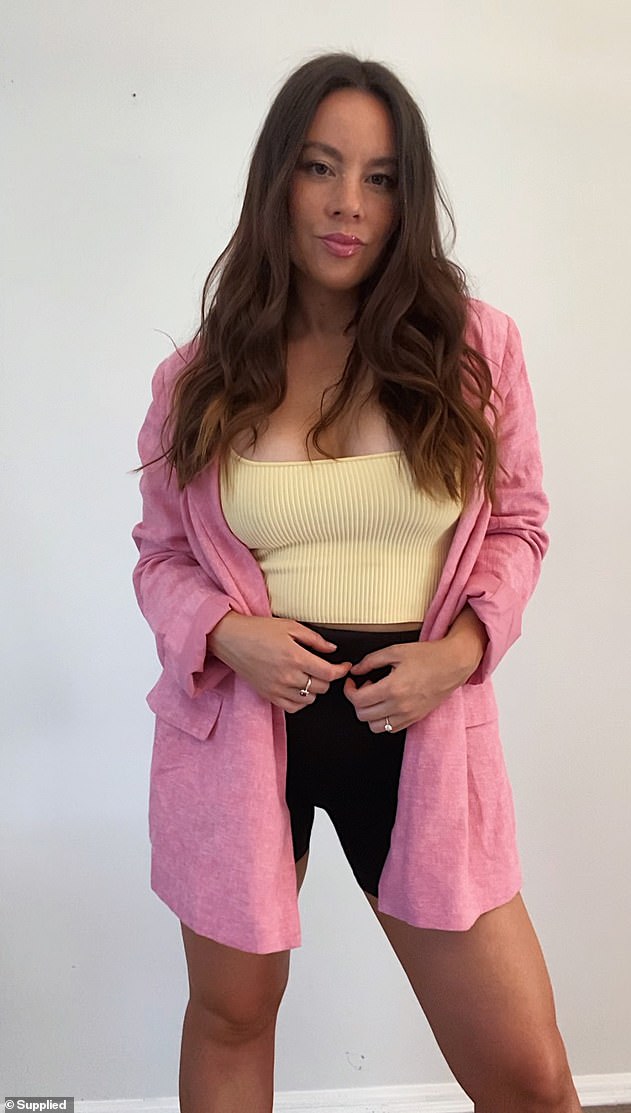 Ms Lionnet said her partner was left to deal with her increasingly erratic mood swings, indecision, low self-esteem and depression, while she continued to excel at work.

After years of self-loathing and struggling to get out of bed, Ms Lionnet resolved to reshape her relationship with alcohol.

She signed up for a 30-day detox challenge in 2019 which allowed her to see how different life could be, hangover-free.

‘It gave me back a lot of clarity,’ she said, adding: ‘I think your sober journey begins from the moment you start thinking about reassessing your relationship with alcohol.’

Ms Lionnet dipped in and out of these programmes for a year, but always returned to the bottle when the challenge wrapped.

To the outside world, she was in control of her life, but behind closed doors the reality was very different. 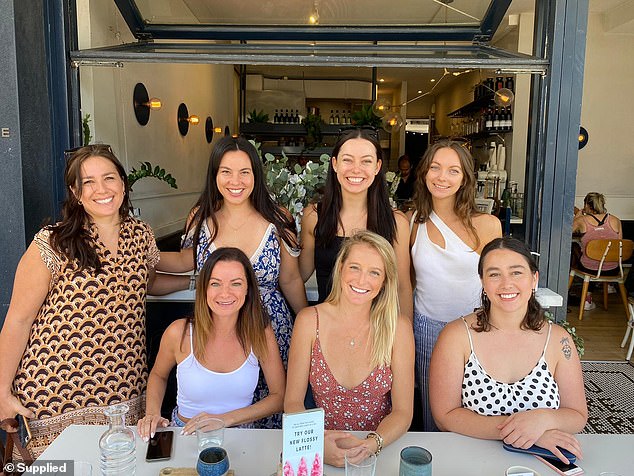 Ms Lionnet (back row, second from left) credits sober social media groups which have provided her with an online community of like-minded alcohol-free friends (pictured) for keeping her on track over the past 18 months

‘I’d stumble home and he’d have to drag me in from the garden or find me passed out on the couch,’ she said.

‘He was the only one seeing me how I really was, and eventually he said “I don’t know if I want to marry you, I can’t be your carer”.

‘It made me realise I never want to be the person that someone has to look after.’

But it wasn’t until she started educating herself about what excessive alcohol consumption really does to the body that she was able to fully relinquish her dependence.

Alcohol causes damage to the liver, heart and brain, as well as digestive difficulties which are triggered by the large quantities of acid drinks are laced with.

It has also been shown to disrupt and reduce sleep quality, with drinkers who imbibe shortly before bed often experiencing restlessness and debilitating fatigue the following day.

Experts say binning the booze for just one month can transform your health, provided the temporary abstinence leads to a more moderate and mindful approach to drinking in the long run.

Dietitians and fitness coaches promise even short periods without alcohol will improve memory, mental clarity and sleep, as well as promoting weight loss and reducing pressure on the liver which starts to cleanse itself just one hour after your last drink.

Doctors say abstaining from alcohol for as little as one month can enhance concentration and decision-making, while also reducing the risk of mental health issues including anxiety and depression.

Ms Lionnet attests to this, claiming that ‘100 per cent, no question’ both herself and her clients have seen clarity improve in a matter of weeks.

‘People just back themselves, they make quicker, clearer decisions and trust their instincts much more so than when they were drinking,’ she said.