How to REALLY dress for your shape

If you’ve ever puzzled over whether you’re supposedly pear-shaped or an inverted triangle, a blogger’s brilliant take on body positivity will banish those woes for good.

Oonagh Keating from Liverpool shared a graphic by designer Michaela Jedinak, of Joy of Clothes on Twitter entitled ‘how to dress for your body shape’ on Twitter, complete with seven different shapes.

But instead of advice on choosing an A-line skirt over high waisted jeans, Oonagh replaced every caption with the phrase: ‘Dress how you like, it’s your body’.

Her post caught the imagination of followers and has since been liked 51,000 times and shared 36,000 times.

Many commenters admitted they were prepared to be angered by the post until they saw how Oonagh had altered it, and praised her for debunking the myth that people should let their shape rule their fashion choices.

Oonagh Keating from Liverpool shared a graphic about how to dress for your body shape on Twitter, after changing the captions to say that women should wear whatever they like

Another commenter suggested the same principle can be applied to what to swimwear, saying: ‘Get a body, preferably yours. Put it in a bikini. Go to the beach.’

‘I wanted to get across my opinion that, outside of the work sphere, how we dress should be totally up to the individual,’ Oonagh told HuffPost UK.

‘When I was much younger, I felt bombarded by messages about how I should look; these were mainly from the print media,’ she said.

‘Now I’m middle-aged, there are more body-positive messages out there, but the balance is still tipped towards telling people how to look.’ 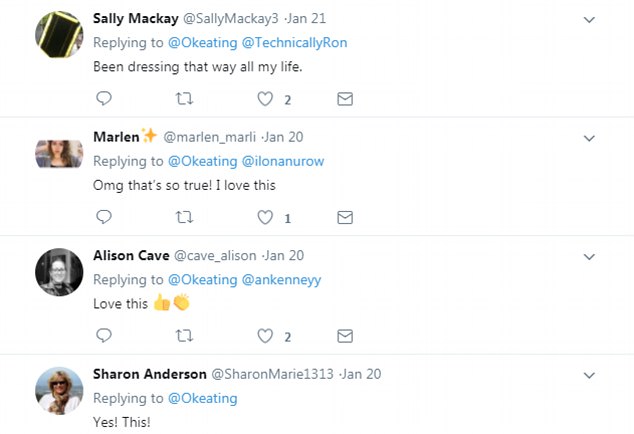 Twitter users praised Oonagh’s post, saying they were prepared to be annoyed about it before spotting what she’d done