Enchanting and unassuming is the perfect way to describe Cadiz on the Costa de la Luz in Spain’s most southerly province of Andalucia.

Divided into old town and new, Cadiz is said to be the oldest continually inhabited city in Western Europe. So it’s hardly surprising that this friendly port city is drenched in history – an estimated 3,000 years of it, to be precise.

And given its geographical location, that past revolves largely around seafaring (Christopher Columbus twice set sail from Cadiz on voyages to the New World). Nowadays, however, tourists tend to visit to sample its renowned seafood, unwind on its glorious beaches or attend its wild annual carnival.

Striking: The view of Cadiz cathedral from Tavira Tower

Cameras to the ready when you make Tavira Tower (torretavira.com), an 18th Century watchtower, your first port of call. Appointed as the city’s official watchtower in 1778 and named after the structure’s first watchman, Don Antonio Tavira, it’s one of 129 watchtowers still remaining in the city. At 150ft above sea level, it offers 360-degree views of Cadiz.

Included in the €6 (£5.20) entrance fee is a demonstration of Cadiz’s Camera Obscura, a mechanism that uses light and mirrors to project images of the outside world on to a large white bowl.

Next, head to Mercado Central de Abastos (turismo.cadiz.es). The grandiose, sandy, rectangular structure, built in 1838 but since remodelled, is packed with fish, meat and fruit and veg stands, as well as tapas bars and kiosks selling wine and cheese.

Grab a drink and wander around tasting small plates while chattering locals shoot the breeze. Food options are wide-ranging, from sushi (Gadisushi) to jamon (Arte Jamon). Try the battered and fried cazon (dogfish) and calamari from the popular ‘Dky’ stall for €5 (£4.30) a cone. The market is open from Monday to Saturday. 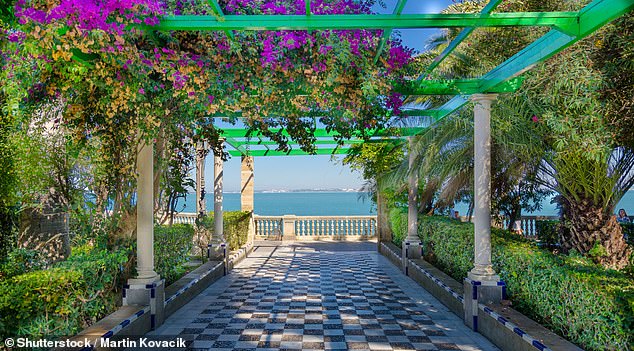 Elegant: The Jardines de Alameda Apodaca is a green area said to date from 1617

Cadiz is almost completely surrounded by water, so make the most of the incredible sea views by walking around its perimeter. Wander along promenades, through the Jardines de Alameda Apodaca (a green area said to date from 1617) and Genoves Park. Both gardens are full of orange trees, water features and cleverly pruned bushes. Stop to take in the views of the Atlantic before heading to the Museum of Cadiz.

A little weary and lacking some English-written information, the museum is still worth a quick visit to browse the ancient artefacts that help you picture Cadiz through its many eras. It’s believed the Phoenicians founded Cadiz (or Gadir, as it was known then) in about 1104 BC. The Romans followed, then the Arabs. The museum is free to EU residents, but don’t forget a €1 coin for the locker (to put your handbags/rucksack in).

Finish your night at the unremarkably named Garage restaurant, which serves Spanish infusion tapas dishes (from £2.50) and larger plates (from £7.30) in a contemporary setting. Try the jamon croquettes (£3.50 for four) with squid ink – some of the best in Cadiz. 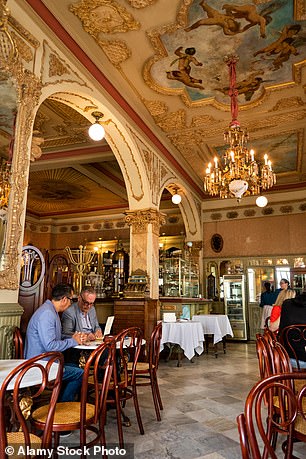 The splendid interiors of Cafe Royalty

Cadiz enjoys about 300 sunny days a year, so grab breakfast in your hotel then head to Playa de la Caleta (andalucia.org) to people-watch and soak up some rays. The beach, flanked by two ancient castles (Santa Catalina and San Sebastian), bears such a resemblance to Havana’s harbour that it was used to mimic it in the Bond movie Die Another Day. Once you’re suitably bronzed, head to the classy Cafe Royalty (caferoyalty.com) for a mid-morning cup of tea (£2.20) and home-made cake (£3.90).

If you’d like something more fortifying, then cava is available by the glass (£4). Artists, politicians and musicians socialised here during the glory days before the Spanish Civil War. Service is classical – meaning food is brought to your table on a silver trolley and served under an elaborate early 20th Century-style ceiling.

Once you’re full, join a ‘free’ (you decide how much you want to tip) English-speaking walking tour with Pancho Tours (panchotours.com). Book a place online, then meet your guide at Plaza San Juan de Dios before visiting various historically significant places, such as the Roman Theatre and City Hall.

The two-hour tour leaves once daily at 1.30pm, but remember that it’s tip-based, so carry cash, and a bottle of water, too. Following your tour, head to Plaza de la Catedral for a mid-afternoon coffee at Hotel La Catedral (hotellacatedral.com). Here you can relax and watch talented local street performers. Or visit the ornate, domed, slightly crumbling baroque/neo-classical structure of the Cadiz cathedral, which took 116 years to build.

Head inside the cathedral, plug in your audio device and gaze upon the many interior treats – from its grand marbled walls (it’s said to be the only cathedral in Spain that uses marble as a wall coating) to its intricately detailed wooden choir stalls. It costs €6 (£5.20) for entry but the price includes access to the cathedral’s steep bell tower located around the corner.

Finish your evening at El Faro – arguably the most famous fish restaurant in Cadiz. Enjoy an aperitivo at the ‘barra’, which, with its grey marble and crisp white walls, looks like a fancy champagne bar. Once your table is ready, you’ll be whisked to the main restaurant via a modest door.

That one door, however, will transport you back to an era when dark wood and floral pottery plates were seen as lavish interior furnishings. Inside, sepia-tinted pictures and traditional azulejo tiles cover El Faro’s walls while waiting staff – immaculate in white suit jackets – serve you with a flourish.

The platos (large plates) of local fresh fish are incredible (from £15.10). But make sure you order a couple of tortillitas de camarones (£2.10) – a thin fried onion bhaji-like fritter containing seafood. Sumptuous and simple.