How to spot a rogue trader, after ‘cowboy builder’ complaints rose 31% last year

Britons are urged to be on their guard against rogue traders when having work done on their home, amid a rise in official complaints.

Homeowner complaints about cowboy builders soared by almost a third last year compared to the previous year, according to Citizens Advice Bureau complaints data obtained by GS Engineering through an Freedom of Information request.

Going rogue: When seeing poor-quality work, nearly a third of Britons claim to have confronted the tradesperson, according to Nationwide

With more than 14,000 complaints lodged in the first four months of this year, there could be a similar number of complaints recorded in 2022.

It also revealed that window fitters, kitchen fitters and general builders were the trades most likely to be targeted by rogue operators.

What is a rogue trader?

Generally, individuals or companies who carry out work to such a poor standard that it requires fixing or redoing to bring it up to the required level are considered rogue traders.

More than two in five Britons have either fallen victim to one or know someone who has, according to research by Nationwide.

Once work has begun it can quickly become a very disruptive and expensive mistake. For example, poor work on the kitchen is likely to cost more than £4,500 on average to put right. 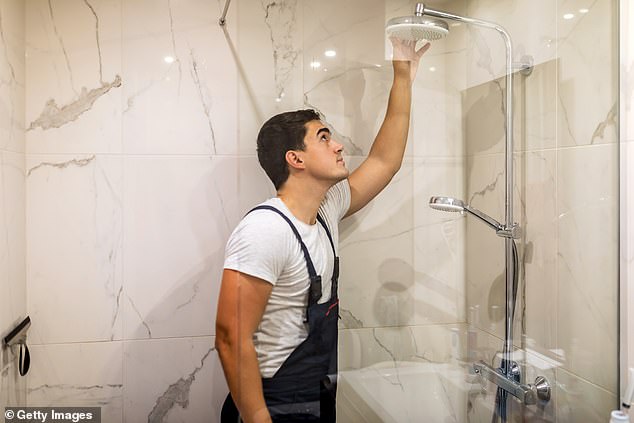 Red flag: More than half of Britons have had someone knock on their door uninvited saying they could help with work on their home

When seeing poor-quality work, nearly a third of Britons claim to have confronted the tradesperson, according to Nationwide.

A further 28 per cent resorted to leaving bad reviews online, and more than a quarter posted about it on social media. However, 15 per cent admitted they did nothing.

Despite the poor-quality work, almost two in five said the money paid wasn’t returned. Of the 48 per cent of people who did get some back, only one in five were fully refunded.

How can homeowners protect themselves?

More than half of Britons have had someone knock on their door uninvited saying they could help with work on their property, according to Nationwide.

At face value, it is not easy to distinguish between a rogue and a genuine professional. It is therefore essential for homeowners to do their own due diligence.

A great first step for homeowners is to always demand proof of a trade body membership from any tradesperson they are considering hiring.

Industry bodies for electricians include the National Inspection Council for Electrical Installation Contracting (NICEIC) and National Association of Professional Inspectors and Testers (NAPIT), whilst with gas engineers, you should look for a Gas Safe Register certificate for example.

The most common find-a-trader websites include TrustATrader, Checkatrade, Rated People and MyBuilder.

These sites not only enable you to find tradesmen, but also see how well they have been reviewed by previous customers.

However, these websites are also funded by the tradesmen advertising on them, and therefore they are not necessarily a guarantee for quality workmanship.

Another possibility is the Government-backed approved trader scheme, TrustMark.

With strict codes of conduct imposed on its members and a dispute resolution ombudsman that customers can turn to if something goes wrong, this website can provide further peace of mind for home improvers.

On top of these sites, the expert advice is to always conduct your own research into whoever it is you decide to hire.

However, it’s important not to just take the tradesperson’s word for it. Most trade associations will have a directory of their members on their site.

It may also be wise to check the firm out on Companies House, to see how long it has been trading and assess its financial situation.

It can also help getting multiple quotes for any major job, asking each tradesperson questions to assess their expertise and perhaps more importantly, decide whether or not you trust them.

When it comes to deciding who to pick, don’t necessarily go with the cheapest quote. If it is hundreds or even thousands of pounds lower than the average and sounds too good to be true, it probably is.

It could mean they are a cowboy builder, or could not be experienced enough to give accurate figures.

And after all, paying for a cheap job might end up costing more overall if it needs to be re-done.

For bigger jobs it is important to have a building contract in place and avoid paying large amounts upfront.

A trustworthy builder will be unlikely to ask for cash upfront and should have enough money as a business to cover the initial outlay for materials – although in some cases they may ask for an upfront deposit.

However, it’s always sensible agreeing to pay on completion of the work, or release funds according to an agreed schedule upon each completed stage of a job.

Finally, it’s worth being mindful of any trade with very high availability. So when that next so-called tradesperson comes knocking at your door, treat it as an immediate red flag.

When it comes to paying a tradesperson for their work, Nationwide is also warning homeowners to be on the lookout for fake email invoices from scammers.

A quarter of people surveyed by Nationwide have been the victim of an email hack scam – where a fraudster intercepts an email from an actual trader and modifies the payment details.

Despite receiving payment details via email and text, more than a third of people surveyed by Nationwide admit they had not previously been aware that criminals can intercept genuine email and text exchanges.

In addition, nearly two thirds of people say they have not checked an email address to see whether it has been compromised.

Ed Fisher, head of fraud policy at Nationwide, said: ‘When it comes to paying for the work it’s always important to make sure that any emails you receive are genuine.

‘Email scams can happen at any time, whether the work has been done properly or not.

‘It’s important to be careful when receiving requests for payment over text or email as fraudsters have the capability to intercept these and make subtle changes to account details which will divert the payment to them.

‘Ring the tradesperson on a number you know is theirs and double check the account details. If anything in the email header looks odd, don’t send the money.’

TrustMark is the Government-backed approved trader scheme. This is its advice for hiring traders to do work on your home: