A tell-tale sign property prices are about to fall has been revealed by a real estate expert.

In the April to June quarter this year, house prices fell by two per cent amid disruptions and uncertainty in the market, sparking fears of a pandemic-induced plunge.

Property market expert Stephen Koukoulas warned buyers to monitor for-sale listings, as a sharp rise could be a strong signal that house prices are about to fall.

Ms Conisbee said that if there are a lot of people wanting to sell, this could be because they are financially stressed as an owner-occupier or, as an investor, the property was not achieving rent or capital growth.

She said either of these would mean less confidence in the market and therefore sellers would be willing to accept lower offers.

Ms Conisbee said that listing appear to have increased in most major locations in the country, however, she added there could be an exception to the rule.

‘People tend to buy and sell more when the property market is good too. In fact, the last time we saw a drop in listings was when the market was very weak,’ she said.

In the three months to June, property prices in Melbourne dropped by $32,000 and in Sydney by $23,000, according to the Domain House Price report. 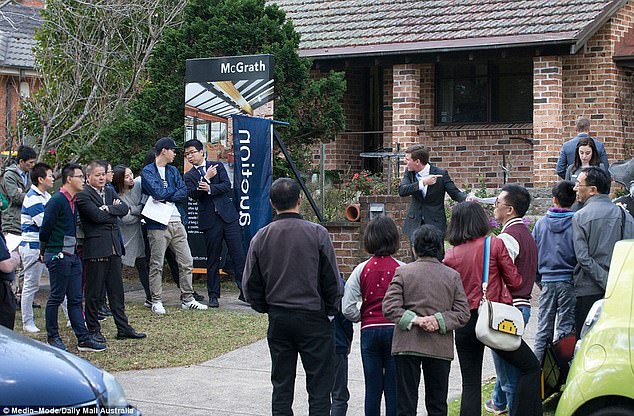 House prices across the country were down in the three months to June with the exception of Tasmania where they rose by 1.4 per cent while in Adelaide the remained steady

Mr Koukoulas said that low interest combined with high unemployment could cause prices to drop by 15 per cent in the second half of 2021.

WHICH AREAS ARE MOST AT RISK?

– Suburbs with a large number of apartments rented to overseas students

– Suburbs where there is apartment oversupply

Ms Conisbee agreed saying: ‘Prices are overall remaining relatively steady, surprising given that we are heading into a recession and seeing rising unemployment’.

Experts have predicted the Australian unemployment rate, currently at more than 7 per cent, would rise to almost 10 per cent by Christmas.

‘Price falls to date have been minimal; significant government stimulus, mortgage holidays and low interest rates have helped to support home values,’ according to the Domain House Price report.

Ms Consibee added that some areas in particular are at risk of plunging prices.

‘Suburbs with a large number of apartments rented to overseas students – rental listings continue to rise in these areas. The other market that isn’t doing well is where there is apartment oversupply.’

House prices across the country were down in the three months to June with the exception of Tasmania where they rose by 1.4 per cent while in Adelaide the remained steady.

The apple isle also has Australia’s lowest unemployment rate among the states despite being a smaller area that is dependent on tourism.

At the start of the coronavirus global pandemic in March, Tasmania had Australia’s lowest jobless rate of 4.9 per cent and continued to hold that title in June, albeit with a higher unemployment level of 6.9 per cent.

ADELAIDE: House prices steady and unit prices down by 2.9 per cent.

HOBART: House prices rose by 1.4 per cent while unit prices fell by 1.5 per cent.