How to visit FIVE African countries in one epic nine-day luxury trip, from Botswana to South Africa

Elephants and buffaloes aren’t bothered by borders, roaming from one country to another, so why should you be?

Visiting five African nations in nine days may sound like an awful rush but it isn’t on a cleverly-put-together itinerary built around a luxurious three-night cruise on mighty Lake Kariba.

It’s an 11-hour overnight flight from the UK to Johannesburg, the gateway to this adventure, and you’ll be raring to join a guided tour of the city’s must-sees, the excellent Apartheid Museum, Nelson Mandela Bridge, the view from Constitution Hill and Soweto.

Next morning it’s a two-hour flight to Kasane in the north-eastern corner of Botswana on the banks of the Chobe river, near the world’s only quadripoint, where four countries meet. This is where the passport-stamping starts in earnest.

Your base for the next few days is secluded Cascades Lodge with its eight riverside bungalows. It’s a short ride away on a flat-bottomed boat but located across the border in Namibia on an islet just off Impalila island, at the confluence of the Chobe and Zambezi rivers.

Border crossings swiftly dealt with, the boat glides past reedy banks and glistening, basking crocodiles to the floating boardwalk leading to the lodge.

It is the most idyllic setting. Afternoon drinks on the veranda are to the sound of the burbling rapids with thrilling views of elephants making their twice-daily river crossing from Zambia on the far bank, while snorting hippos bob up and down in the foreground.

Next morning, it’s an early start in the motorboat, nipping ashore to migrate from Namibia and re-enter Botswana and on to a game drive around Chobe National Park, one of the best areas for game viewing. Highlights for us were being surrounded by family of elephants, seeing a leopard sleeping on a rock and witnessing a slow courtship between a lion and lioness.

There are no borders to cross the next day, while walking from village to village on Impalila to see dancing, crafts-people at work and a school in the morning. Then there’s relaxing at the lodge or fishing in the afternoon and an early evening cruise, sneaking into Zambia to land on the white-sand beach of a tiny island. 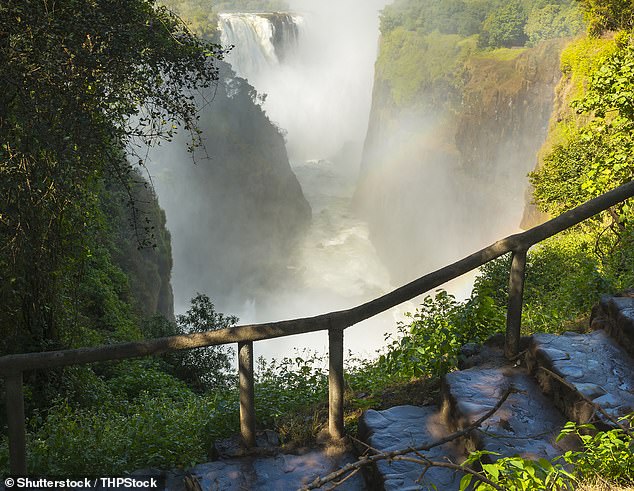 The grand finale of the journey is a trip to the majestic Victoria Falls. Pictured is the Devil’s Cataract section of the natural wonder 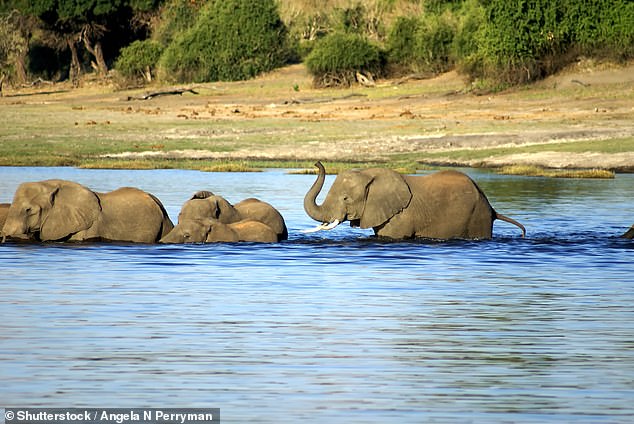 Elephants wade across the Chobe River in Chobe National Park, one of the many amazing locations Caroline visited

It’s now time to board an eight-seater plane for a first glimpse of Victoria Falls far below, before the great dam and the vast expanse of Lake Kariba, straddling the border between Zambia and Zimbabwe, loom into view. Standing out among the other boats in the marina is African Dream, launched last year by CroisiEurope, the French line best known for river cruises in Europe. She is a handsome, 108ft vessel, three decks high, with eight airy cabins and floor-to-ceiling sliding windows.

Lake Kariba, 175 miles long and at least 40 wide, was created by the construction of a vast hydroelectric dam in the late 1950s.

It is a ghostly feeling sailing in the early morning past the tops of dead trees – still standing 60 years after the water engulfed them – into the mouth of the Gache Gache river.

Floating along, the only sounds are birdsong and the splash of crocodiles launching themselves from the thick reeds. Elephants come to the shallows to bathe and play, white egrets peck the insects from the backs of ferocious buffaloes and hippos roll in the mud. It’s all mesmerising to watch from the safety of a boat. 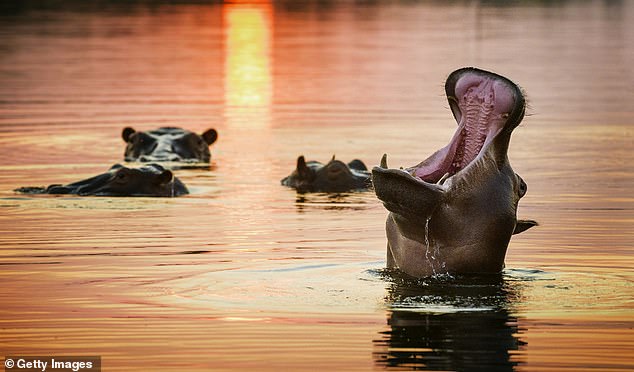 Caroline saw hippos bobbing up and down in the water and rolling in the mud on the trip. The creatures here were snapped in Lake Kariba

On a 4×4 safari in Matusadona national park, on the southern shore of the lake, it feels as if yours is the only vehicle.

Here, in 543 square miles of woodlands, bush and mountains, you’ll see descendants of the thousands of animals saved in Operation Noah, a rescue mission that took place from 1959 to 1964 to save the wildlife from Lake Kariba’s rising waters during the construction of the dam.

The build-up to the grand finale starts with another small plane flight to Victoria Falls, the town on the Zimbabwean side of the falls.

Nothing can prepare you for the power and beauty of the Falls. The one-mile long curtain of water pouring down from Zambia can drench you on the walking trail on the opposite side of the gorge. Face-to-face with this wild, thundering phenomenon is an incredible end to an extraordinary, watery journey through southern Africa.

CroisiEurope (croisieurope.co.uk), offers nine-day southern Africa holidays of one night in Johannesburg, three nights at Cascades Lodge, three nights aboard African Dream, and one night at Victoria Falls. Prices, which also include all meals, drinks, excursions, and flights within Southern Africa, start at £4,604pp.

British Airways (ba.com) has flights from Heathrow to Johannesburg from £659 return.