How to visit Luxembourg for under £100 a night

Not as tiny as you may think, the capital of the Grand Duchy is a captivating mixture of ancient fortresses, sprawling parks and a near-perfect blend of French and German culinary and cultural influences.

In the past half-century, Luxembourg has become not only a banking hub and a centre for EU business, but also a frontrunner in the green revolution.

New trams and a funicular are slowly making cars obsolete — and the cost isn’t handed down to visitors. In fact, it’s the opposite: any bus, train or tram journey in the entire country costs £1.80. And from March 1 next year, all public transport will be free — a world first.

From March 1 next year, all public transport in Luxembourg will be free — a world first

The location of this cosy hotel is a belter. It’s right on Place d’Armes (far right), Luxembourg’s most famous square filled with restaurants, bars and, in summer, free jazz and brass band concerts. Ask for one of the two attic rooms for soothing views over the trees and rooftops. B&B doubles from £87, hotelfrancais.lu.

Lodgings next to a train terminus are usually a last-ditch option, but this is Luxembourg. The station is bijou and prettified, and the Empire is a no-nonsense, modern affair with a good buffet breakfast and demure colour schemes in the rooms. B&B doubles from £88, empire.lu.

One of the few ‘design’ hotels in this city, Hotel Grey is located in a sturdy old Thirties building. All inside is firmly 21st-century, however, with minimalist, black-and-white-toned New York loft- style rooms complete with funky artworks above the beds. B&B doubles from £77, hotelgrey.lu.

The ibis concept doesn’t change much wherever you go but, with only 68 rooms, this is an appropriately compact outpost of the chain. It’s a 15-minute walk from the city centre and its rooms are in vibrant pop-art colours. B&B doubles from £82, accorhotels.com.

Check out the Bock Casemates

Prussian, Austrian, Spanish and French forces all built parts of the immense Bock Casemates fortress, hewn into the sandstone cliffs that gave the city’s fortifications the nickname ‘Gibraltar of the North’.

Only the widest portions of the tunnels are open to the public — the rest are just too narrow.

The dank passageways are a grim reminder of a time when these fortifications were used as armouries, bakeries and an emergency shelter where, incredibly, up to 35,000 Luxembourgers sheltered from the Nazis during World War II (£6.40, luxembourg-city.com).

A strong contender for the best-value city card in Europe, the Luxembourg Card costs £12 for one day. That buys you limitless journeys on trains and buses in the Grand Duchy and free entry to most attractions. Visit one museum and make one journey, and the card has already paid for itself (visitluxembourg.com).

Stroll in the valley 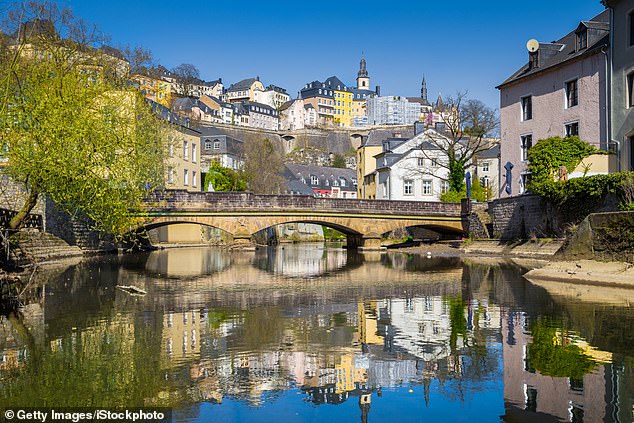 Down at the bottom of the city’s spectacular cliffs runs the Alzette river, and the smaller Petrusse river.

Take a stroll past skate parks, mini-golf courses and winding woodland trails to find the most demure part of what is already one of Europe’s most sedate capital cities.

If you fancy something rather more strenuous, try the Wenzel Circular Walk, a 3.5-mile journey of 1,000 years of history, starting from the Bock fortifications.

It also runs past the former Neumunster Abbey, once home to Benedictine monks and now a cultural centre where you can hear free ‘jazz aperitif’ concerts on Sunday mornings (luxembourg.public.lu).

Luxembourg’s version of champagne, known as cremant, is grown in the Duchy side of the Moselle Valley.

Although little of it leaves the country due to small production volume, among connoisseurs it is considered to be, at times, the absolute equal of champers at a fraction of the price.

Take home a bottle of Domaines Vinsmoselle or Bernard-Massard cremant for as little as £6.50 from the centrally located Alima supermarket. 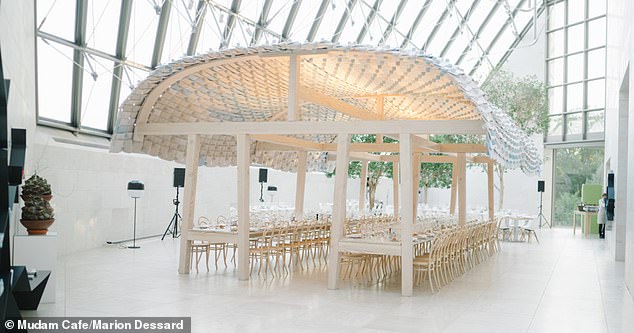 The cafe hidden inside the Mudam modern art gallery, above, is a nice spot for lunch

The glass-panelled roof and long, communal tables make for a greenhouse-like atmosphere in this cafe, hidden inside the Mudam modern art gallery. Daily specials such as veal escalope with pommes frites and salad cost a mere £12.85 (mudam.com).

The surgically white interior of this famed cafe has endless display cases of macarons, cakes and quiches laid out like jewels.

Now run by the second generation of the Oberweis family, it has been going for 50 years.

The plats du jour options at £13.30 are as rich and rewarding as the wonderful cakes: try the sea bass with champagne sauce (oberweis.lu).

A giant local smoked sausage sandwich with mustard, tomato, pickles and salad is just £4.50, and the varied range of soups includes a tart Cambodian broth (£6) and the national classic bouneschlupp soup, with green beans, sausage, onions and potatoes (£6.50, alasoupe.net).

Slide into one of the leather seats in this diner-style spot near the railway station to sample the national dish of bouchee a la reine — giant vol-au-vent-style puff pastries filled with chicken, cream and mushrooms. A gargantuan portion here is only £10.50 (4saisons.lu/fr).