President Trump’s team does its best to keep him safe from coronavirus by inspecting every venue he enters, scrubbing down every bathroom he uses beforehand, and testing all aides who come into contact with him, according to a report.

The scaled-up efforts to prevent the president from contracting COVID-19 comes amid reports that several Trump campaign staffers who attended his rally in Oklahoma last weekend are in quarantine.

The enhanced measures have been put in place as Trump seeks to project a sense of business as usual even as the pandemic continues to grip wide swaths of the United States, particularly in the South and West.

The United States recorded 45,242 new cases of COVID-19 on Friday, the largest single-day increase of the pandemic, according to a Reuters tally, bringing the total number of Americans who have tested positive to at least 2.48 million.

President Trump’s team has stepped up measures to minimize his exposure to the coronavirus, according to a report. The president is seen above at the White House on Thursday

The Reuters tally of 45,242 cases differs from statistics provided by Johns Hopkins University, which said 39,972 cases were recorded Friday, bringing the total positive case load to more than 2,467,000.

The new record for positive COVID-19 tests recorded by Reuters comes as several states at the center of a new surge in infections took steps back from efforts to ease restrictions on businesses.

The White House this week no longer required temperature checks or mask-wearing inside the West Wing – a sign that the administration wants to move on from the pandemic.

But those who come into contact with Trump are regularly tested for COVID-19, according to CNN, which cited sources as saying that the president privately worries about the repercussions of getting infected.

Trump was reportedly upset last month after it was learned that one of his military valets who handles his food tested positive for COVID-19.

In the days following the diagnosis, Trump was careful when in the presence of people he did not know well, CNN reported.

While Trump appears eager to move on from the virus, the climbing COVID-19 case count and the dozens of White House staffers who entered quarantine after last week’s rally in Tulsa are making that difficult. 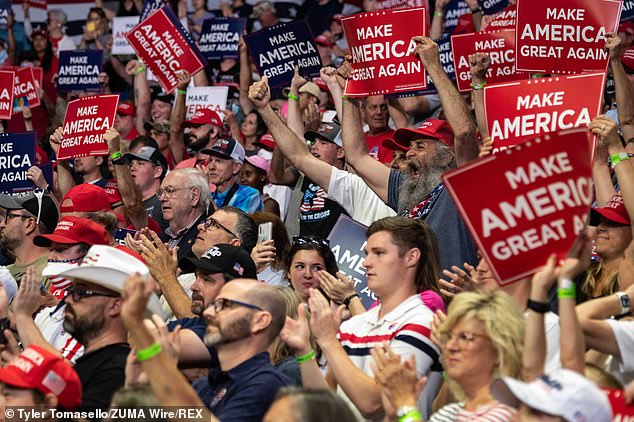 At least eight Trump campaign staffers tested positive for the coronavirus and dozens of Secret Service personnel have been told to work from home in quarantine after several attended a rally in Tulsa, Oklahoma, last Saturday

This week, a senior White House economic official who was in the vicinity of the president this month at the Rose Garden during an event tested positive for coronavirus, according to CNN.

At least eight staffers on the campaign – two of whom are in the Secret Service – have tested positive for coronavirus and dozens more have started working from home in quarantine after attending the president’s rally in Tulsa on Saturday.

Trump held a similar event in Phoenix on Tuesday when he addressed a group of 3,000 students – an event that had the feel of a campaign rally.

Most attendees at the Tulsa and Phoenix events did not wear masks and did not social distance.

An Oklahoma-based journalist who covered the rally in Tulsa said on Friday that he also tested positive.

‘I’m pretty surprised,’ Monies wrote on Twitter. ‘I have zero symptoms (so far) and I feel fine. In fact, I ran 5 miles this morning.’

Monies said he was inside the rally for about 6 hours on Saturday at the BOK Center and that he wore a mask and mostly practiced social distancing, except for when he went to the concourse to get a snack. He said he was never close to the president. 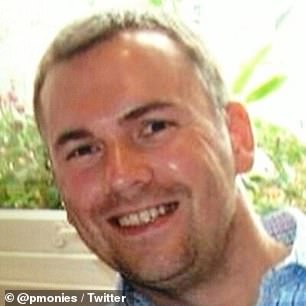 An epidemiologist at the Oklahoma City-County Health Department who notified Monies of his positive result said it’s difficult to determine if he contracted the coronavirus at the rally.

‘I can’t say definitively that I got it at the rally,’ Monies said. ‘But it’s someone I’ve been in contact with in the last two weeks.’

The Trump campaign revealed the decision to impose a quarantine in order to contain possible further spread of the coronavirus among those who worked the event to their families and others in the community.

The decision comes after the Secret Service ordered dozens of officers who worked the event to quarantine upon return to their homes.

Dr. Bruce Dart, the executive director of Tulsa City-County Health Department, had recommended that the rally be postponed because of a surge in reported positive cases of coronavirus linked to large indoor gatherings. 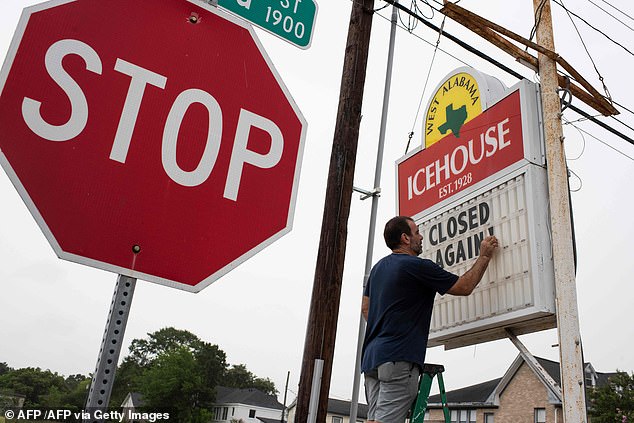 Bar owner Petros J. Markantonis changes the marquee at his bar to ‘Closed Again’ at the West Alabama Ice House in Houston, Texas on Friday, after the governor ordered bars closed 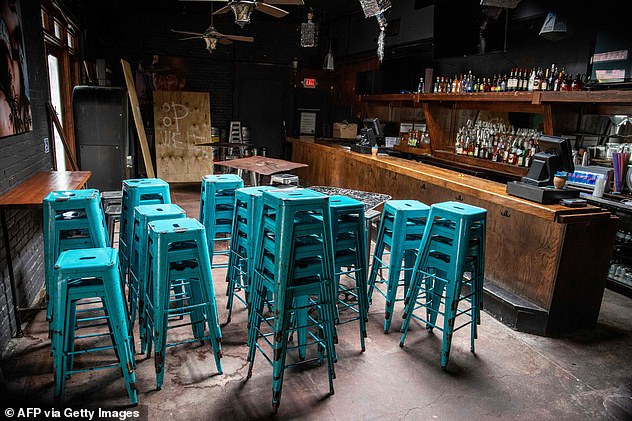 Chairs sit stacked inside a closed bar in Austin, Texas on Friday

The White House dismissed concerns about health risks at the rally before it happened.

They noted that masks and hand-sanitizer would be available to attendees – but that masks would not be required.

The health concerns compound other problems that turned the event into a tactical failure.

Only 6,200 turned up for the 19,000-seat venue, as the area was experiencing a rise in coronavirus cases.

The campaign had predicted a record turnout, and both Trump and campaign manager Brad Parscale touted 1 million online RSVPs, only to later say as many as 300,000 were fake sign-ups from TikTok users and K-pop fans who decided to troll the campaign.

Trump brushed off critics of the event, saying: ‘We had a nice crowd.’ 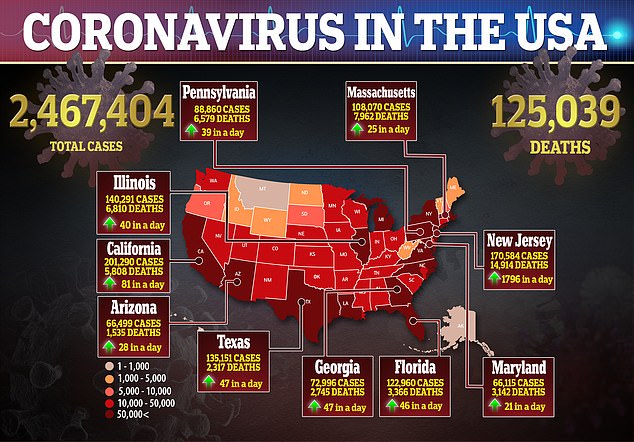 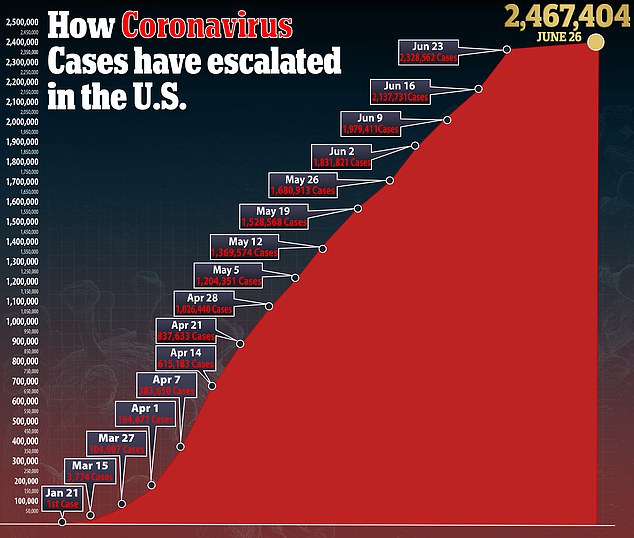 In a sign of his disinterest in the pandemic, the president on Friday was noticeably absent at the first coronavirus task force briefing in weeks.

‘The President continues to lead the whole-of-government response to Covid-19 and regularly receives updates on the work of the task force from the vice president,’ White House spokesman Judd Deere told CNN.

Vice President Mike Pence on Friday defended Trump’s campaign rallies as the right to peacefully assemble and part of the freedom of speech as he issued the reminder: ‘We have an election coming up this fall.’

In the first public briefing of the task force since April, Pence was grilled about how he and the task force could recommend to people they listen to local officials for guidance on the coronavirus pandemic when the campaign disregarded advice from Tulsa experts on holding Saturday’s rally there.

‘Well, I want to remind you again that freedom of speech and the right to peaceably assemble is enshrined in the constitution of the United States. Even in the health crisis, the American people don’t forfeit our constitutional rights,’ Pence said in response.

‘Working with state officials, as we did in Oklahoma and as we did in Arizona, we are creating settings where people can choose to participate in the political process. We will continue to do that,’ he added.

And he pointed out:  ‘We have an election coming up this fall.’

Infections rose across the United States by at least 39,818 on Thursday, marking the worst day since the virus first hit the U.S

Some states – Texas, New Mexico, Arizona and Florida among them – put the pause in their reopenings as their COVID-19 numbers went up.

‘Our focus today is to make sure that, in those areas in the country were receiving a significant, not only an increase in cases but an increase in positivity levels, that the American people know just how important it is to listen to what they are state and local health officials are directing them to do,’ the vice president said.

But the Trump campaign disregarded such local warnings in regards to the campaign rally in Tulsa on Saturday – its first since March.

Health officials in Tulsa urged the campaign to postpone the event, noting the rising number of COVID-19 cases in Oklahoma. Trump and Pence both spoke at the rally.

He also admitted he’d like to see the rally postponed but, since it wasn’t going to be, then officials would deal with the fallout.

‘I recommended we postpone it until it’s safer,’ he said.

‘If we could push it back to when the data tells it’s safer, that was my personal recommendation, that is what I’d personally like to see happen. It’s here so let’s focus on staying safe while it’s here.’

Before the Tulsa rally, Fauci said he would not go, pointing out his age put him in a high risk category.

And, at a congressional hearing on Tuesday, Fauci offered this advice: ‘Plan A: Don’t go in a crowd. Plan B: If you do, make sure you wear a mask.’ 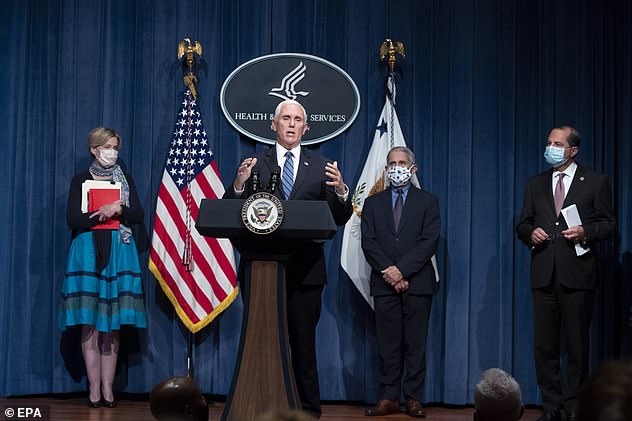 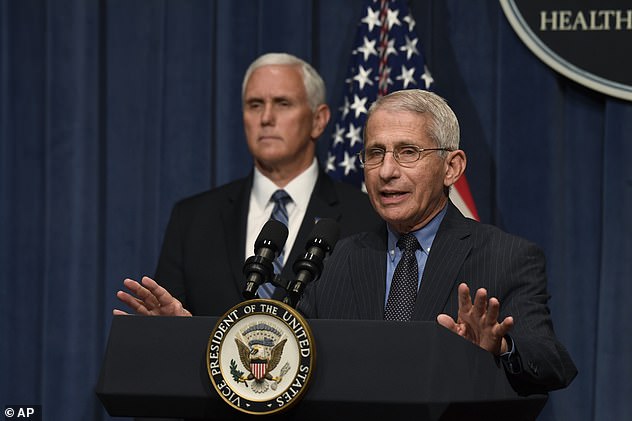 Dr. Anthony Fauci, director of the National Institute of Allergy and Infectious Diseases, encouraged all Americans to take part of safety measures – including social distancing and wearing a face mask

Fauci, at Friday’s task force briefing, encouraged all Americans to take part of safety measures – including social distancing and wearing a face mask, pointing out even those at low risk from getting seriously sick from COVID could transmit to someone in a high risk category.

‘If we don’t extinguish the outbreak, sooner or later, even ones that are doing well are going to be vulnerable to the spread. So, we need to take that into account, because we are all in it together, and the only way we are going to end it is by ending it together,’ the director of the National Institute of Allergy and Infectious Diseases said.

When Fauci finished talking and was walking from podium, Pence grabbed his arm and told him ‘well said.’

Pence spent Friday’s briefing trying to spin the ‘remarkable progress’ the administration has made in fighting the virus even as the numbers showed a different story.

‘We slowed the spread. We flattened the curve. We saved lives,’ he said.

Asked by DailyMail.com whether he expected the death rate to rise, Pence responded: ‘Our hope and our prayer is it’s not the case.’

‘One is too many. We grieve the loss of every American life,’ Pence added.