Children learn to drink at the Rovers Return: How TV soap operas such as Coronation Street force images of alcohol on young people

By James Heale For The Mail On Sunday

We’re all used to the sight of the regulars raising a glass in the Rovers Return, but television soap operas are forcing images of drinking on young people, warns a new academic study.

Six shows – EastEnders, Coronation Street, Emmerdale, Hollyoaks, Neighbours and Home And Away – were broken up into one-minute segments to see how often booze or cigarettes appeared.

On average, alcohol was referenced roughly every four minutes in the 87 episodes studied.

In 87 episodes of viewed, alcohol was referenced roughly around every four minutes on average

Coronation Street had the highest alcohol content, appearing in more than a third of its clips. Hollyoaks scored the least at just 15 per cent.

Tobacco references were rare and appeared in just four per cent of the excerpts.

The study, by researchers based at the University of Nottingham, was published in the Journal Of Public Health.

They said: ‘The current study shows that soap operas, which were all broadcast before the 9pm watershed, are widely seen and accessed by young people. 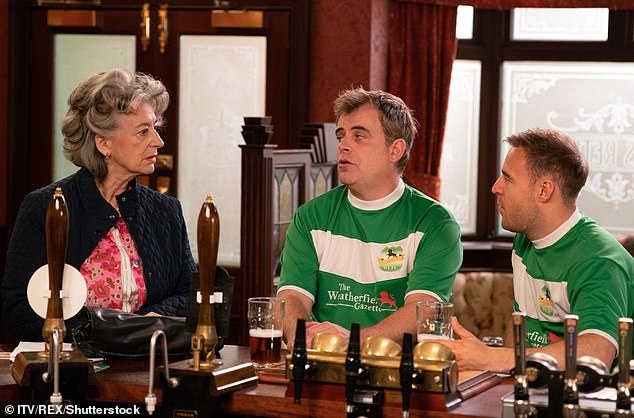 Coronation Street had the highest alcohol content, appearing in more than a third of its clips

‘We estimate that the 87 soap episodes delivered 2.1 billion alcohol impressions to the UK population, including 113 million to children aged under 16.’

Four categories were used to quantify an ‘appearance’: people drinking or smoking, implied use, brand appearance and the presence of related materials, such as cigarette packets or bottles.

The programmes were viewed over three weeks between November 2018 and January 2019.