The rise of e-cigarettes marketed as a safer alternative for smokers has led to more people getting hooked on nicotine products, research by a major tobacco company has revealed.

Documents published by FTSE 100 giant British American Tobacco show the emergence of vaping and the use of other less harmful tobacco products has reversed a decline in nicotine use.

Between 2007 and 2012, the number of nicotine users in BAT’s top 40 markets outside of the US fell steadily from 366 million to 345 million as millions kicked smoking for health reasons. But its internal data showed the total had climbed to 362 million by 2017.

The rise of e-cigarettes marketed as a safer alternative for smokers has led to more people getting hooked on nicotine products, research by a major tobacco company has revealed

In documents unearthed by The Mail on Sunday, both BAT and rival Imperial Brands stated that vaping is ‘additive’ for their businesses. This indicates that e-cigarettes are helping tobacco firms to boost revenues, as opposed to merely replacing lost income from falling cigarette sales.

The resurgence in nicotine use has coincided with the soaring popularity of vaping. A vaping device simulates smoking without burning tobacco. Instead a liquid containing nicotine is heated electronically, producing a flavoured vapour that the user inhales.

The number of those who vape worldwide increased from about seven million in 2011 to 35 million in 2016, according to researcher Euromonitor. Other alternatives to cigarettes include devices in which tobacco is heated rather than burned in order to reduce toxins.

According to the independent Royal Society for Public Health, nicotine on its own is no more harmful than caffeine. E-cigarettes are promoted by Public Health England as aids for giving up smoking.

However, BAT’s research found just 18 per cent of those who used its vaping devices were smokers who had quit. In a briefing to financial analysts late last year, chief executive Nicandro Durante revealed that a study found 5 per cent of vapers had never smoked before, 8 per cent were relapsed smokers and 70 per cent both smoked and vaped.

Concern has also been raised that vaping is becoming increasingly popular among teenagers and other young people, creating a new market for tobacco companies. 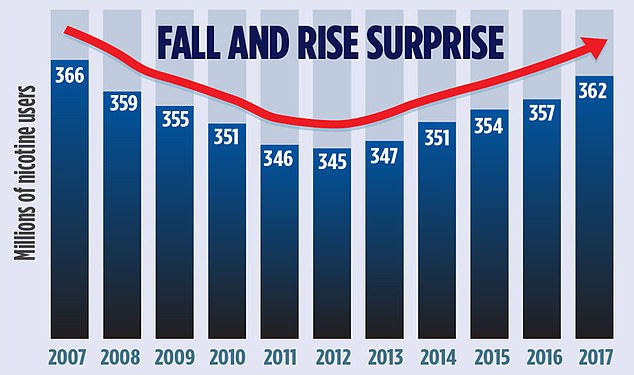 In documents unearthed by The Mail on Sunday, both BAT and rival Imperial Brands stated that vaping is ‘additive’ for their businesses. This indicates that e-cigarettes are helping tobacco firms to boost revenues

The devices have been tried by a quarter of children aged 11 to 15, according to the NHS. Some vaping liquids and devices are marketed using cartoon characters and images of sweets.

Linda Bauld, professor of public health at the University of Edinburgh and a government adviser on tobacco harm reduction, said it was ‘potentially a good thing’ that there were more options for those who want to quit smoking.

But she added: ‘The main concern about nicotine is that it addicts you to a product that potentially has other stuff in it that is harmful.’

A BAT presentation to investors in March said the total nicotine revenue pool is ‘growing rapidly’ thanks to the rise of cigarette alternatives. It estimates revenues will grow 25 per cent between 2018 and 2023 to around £100 billion across its top 40 markets.

Earlier this month, tobacco firm Imperial Brands said it would abandon its policy of hiking its dividend to shareholders in order to reinvest money into the e-cigarette market.

Chief executive Alison Cooper has said the company’s blu vaping devices are an ‘additive business on top of that of tobacco delivery’.

Imperial Brands has predicted the global vaping market will grow between 300 and 500 per cent by 2025 with ‘limited impact’ on its revenue from cigarettes.

BAT has already seen a significant rise in sales from its non-cigarette lines. The tobacco giant’s so-called ‘Potentially Reduced Risk Products’ business has grown to pull in annual revenues of £2 billion in just three years.

The Mail on Sunday has previously reported that vaping and tobacco heating devices generate higher profit margins than cigarette sales. The shift towards new products comes as the Government seeks to eradicate smoking in England by 2030.

A spokesman for Imperial Brands said: ‘The risks to smokers’ health are caused by the toxicants released from burning tobacco, not by the naturally occurring nicotine.’

Andrej Kuttruf, board member of the UK Vaping Industry Association, said: ‘Vaping is at least 95 per cent less harmful than smoking and you are three times more likely to quit smoking if you vape.

‘Figures from Action on Smoking and Health show that of young people aged 11 to 18 who have never smoked, only 0.8 per cent are current vapers.’