How Victorians commuted into London in the 1800s

If you think your commute into London is bad as you’re shoved up against someone’s armpit on a sweaty train, spare a thought for our predecessors in Victorian times.

For many people going to work in the capital, they had no other option other than to walk miles through streets filled with blood and excrement, thanks to the prohibitively high cost of public transport.

Traffic jams were severe as omnibuses jostled for space with animals and cab drivers, with the worst areas for gridlock between Temple Bar, the Bank of England and London Bridge on weekdays between 11am and 5pm.

Crowds of workers walked in from the suburbs, with 200,000 people walking into Central London every day by 1854, instead of crowding onto buses which cost two days’ wages for the average office clerk.

The footways were described as ‘solid masses of moving humanity’ with an estimated 100 tonnes of horse dung a day on the streets, as well as the blood and excrement of animals slaughtered at markets.

The omnibus was a carriage pulled by horses that fit about 12 people inside, with the best two seats at the front reserved for regular customers, while others were often ushered inside to the damp and smelly conditions.

In the 1860s, art critic John Ruskin evocatively described London as a ‘great foul city’ that was ‘rattling, growling, smoking, stinking’ and a ‘ghastly heap of fermenting brickwork, pouring out poison at every pore’.

There were seven railway termini around Central London by 1850, with the Underground built in an attempt to reduce overcrowding through the centre at street level after the Metropolitan line opened in 1863. 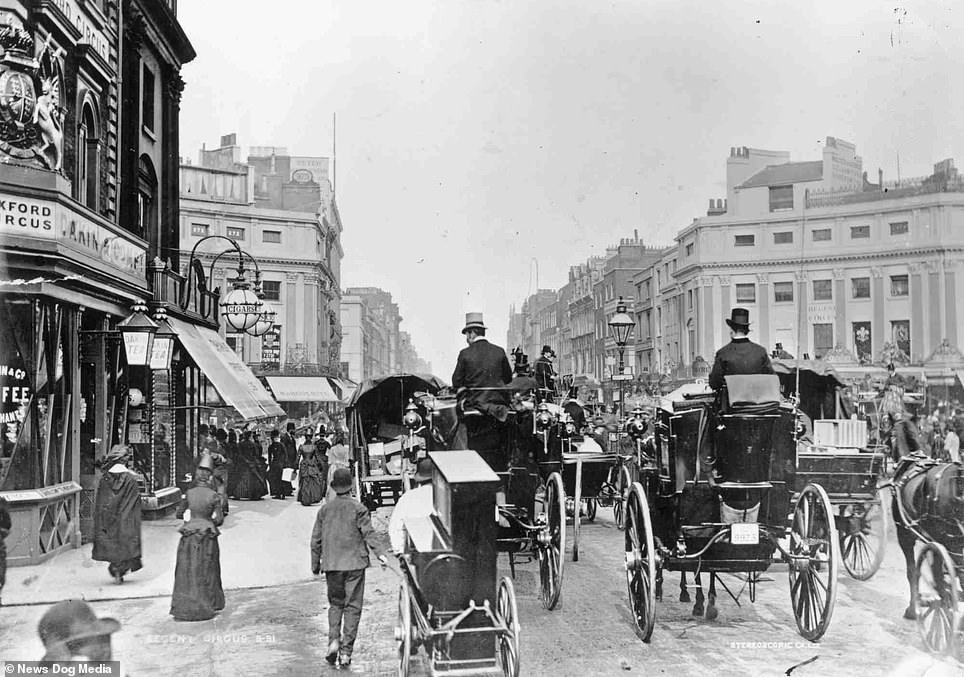 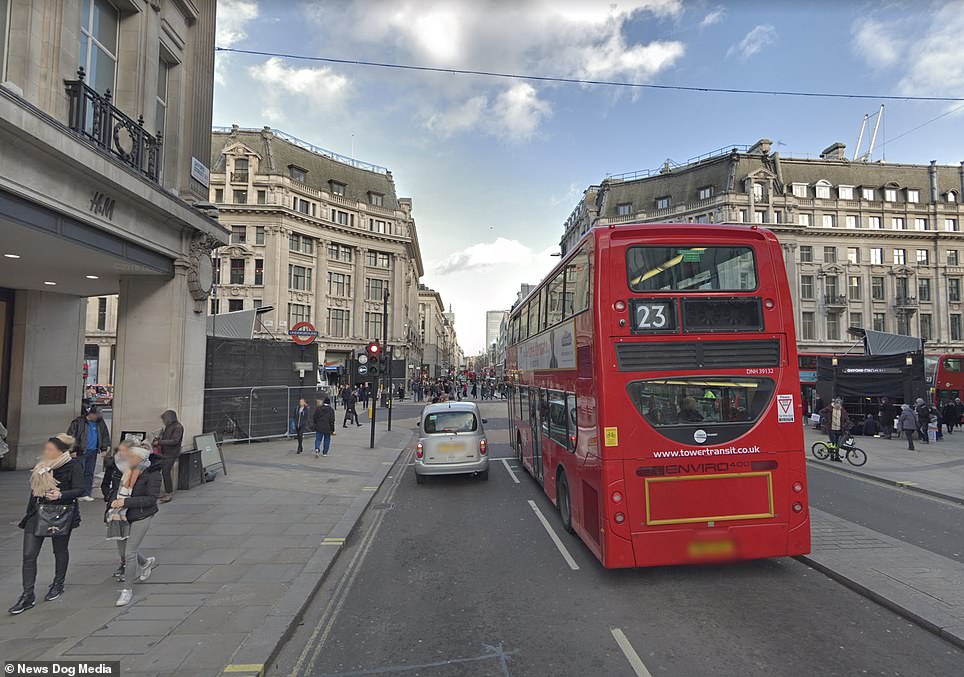 Traffic makes its way towards Oxford Circus in London, facing east along Oxford Street in about 1888 (left) and today (right) 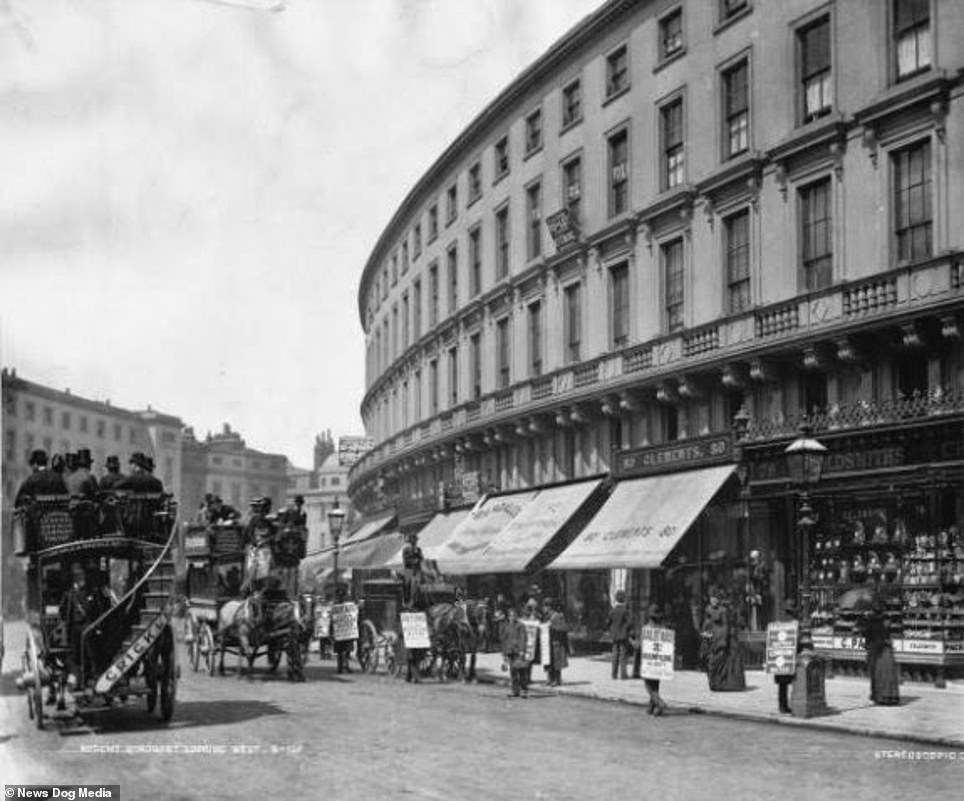 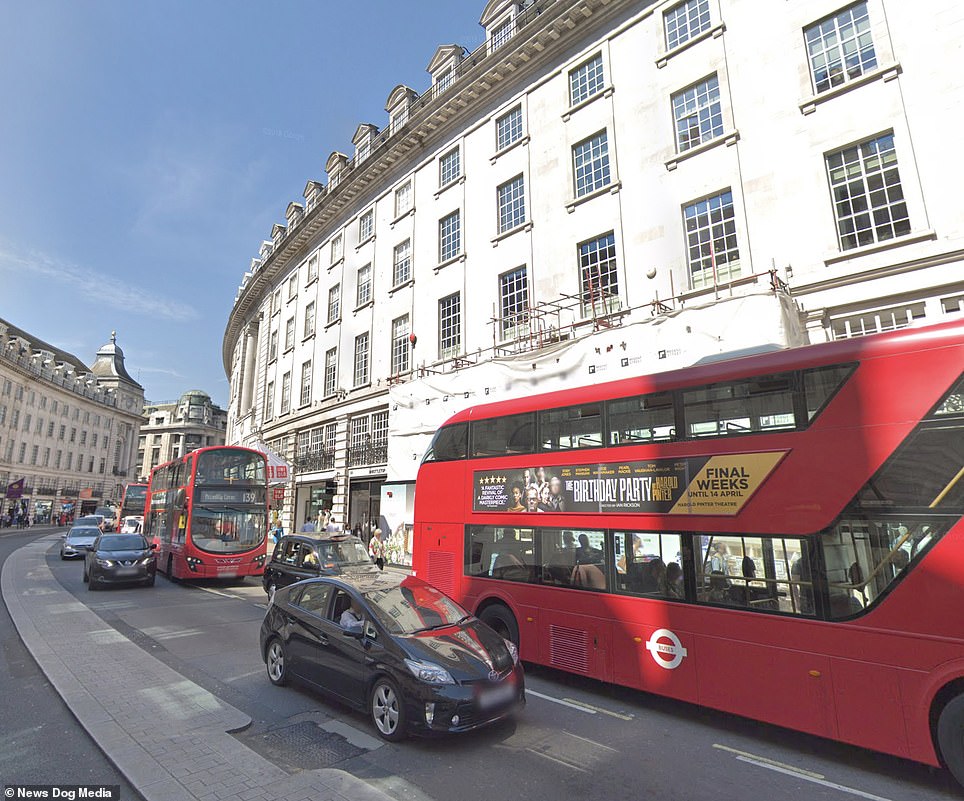 Horse drawn buses passing a group of sandwich board men down the Regent Quadrant, in 1890 (left) and today (right) 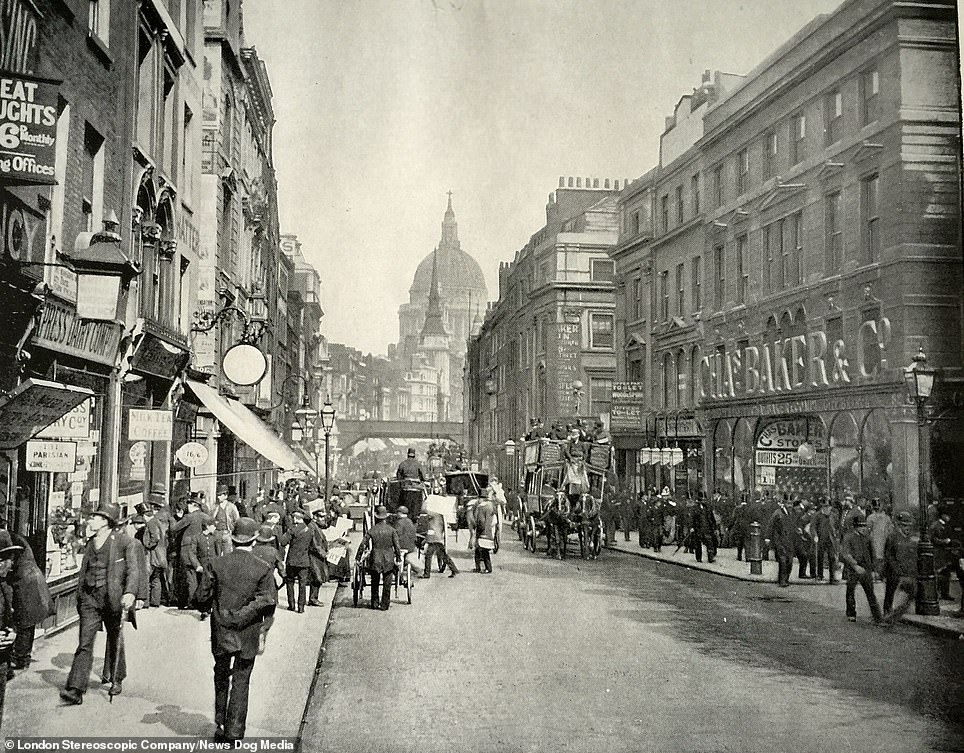 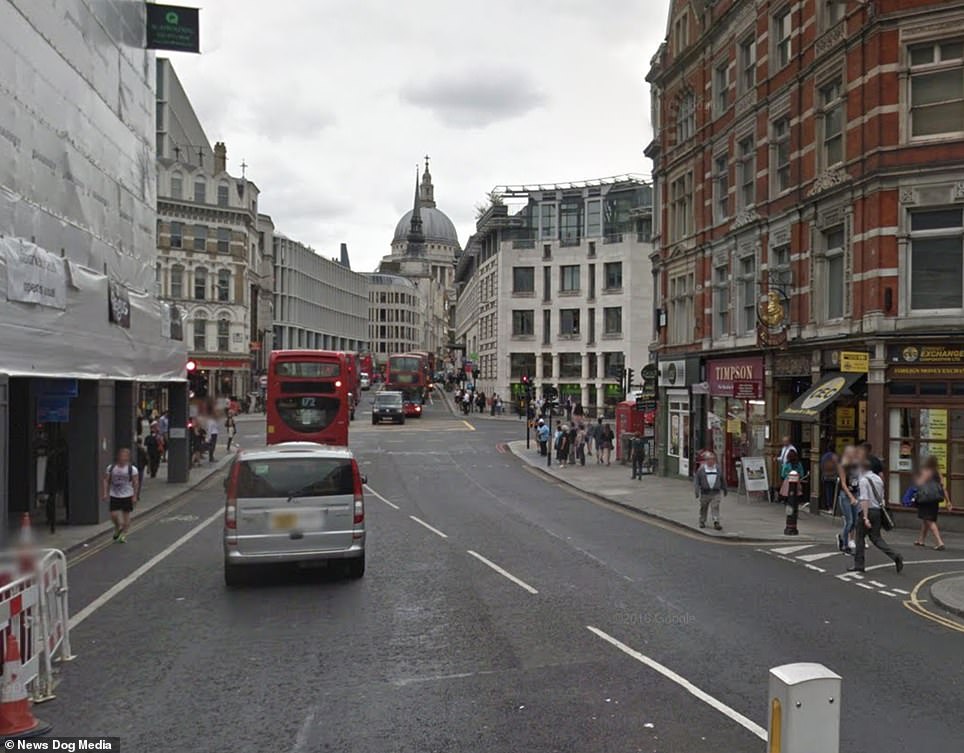 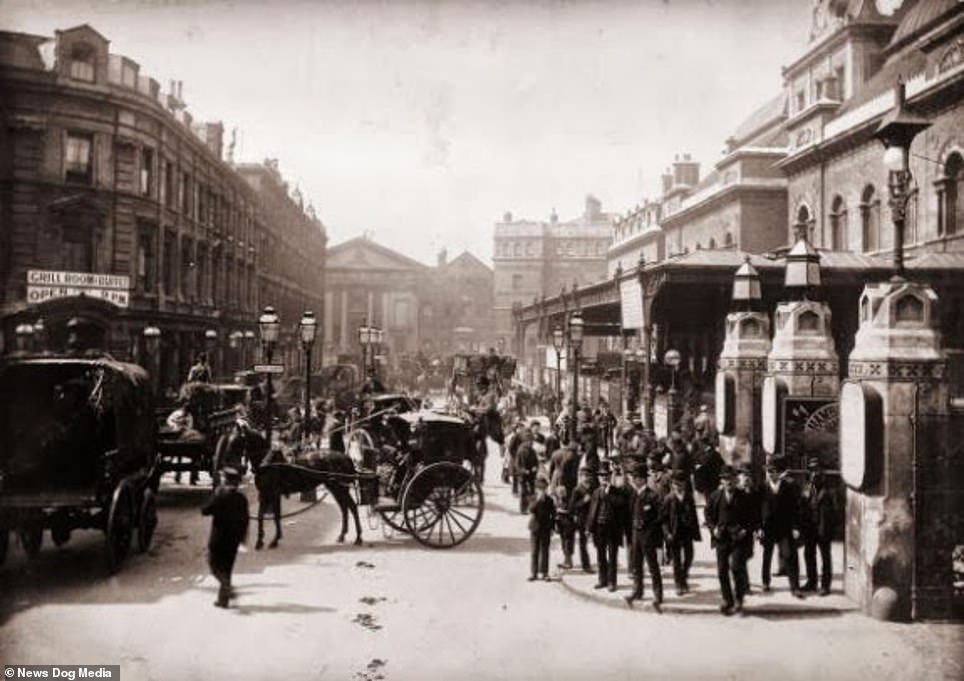 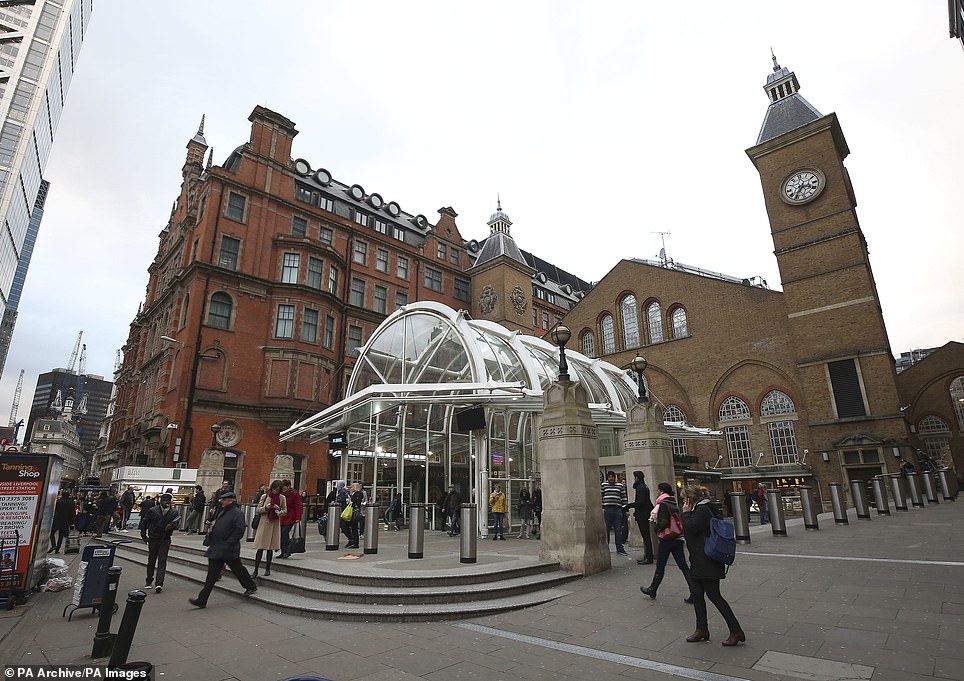 Liverpool Street train station in London in 1890 (left) and today (right), built as the Great Eastern Railway terminus in 1874 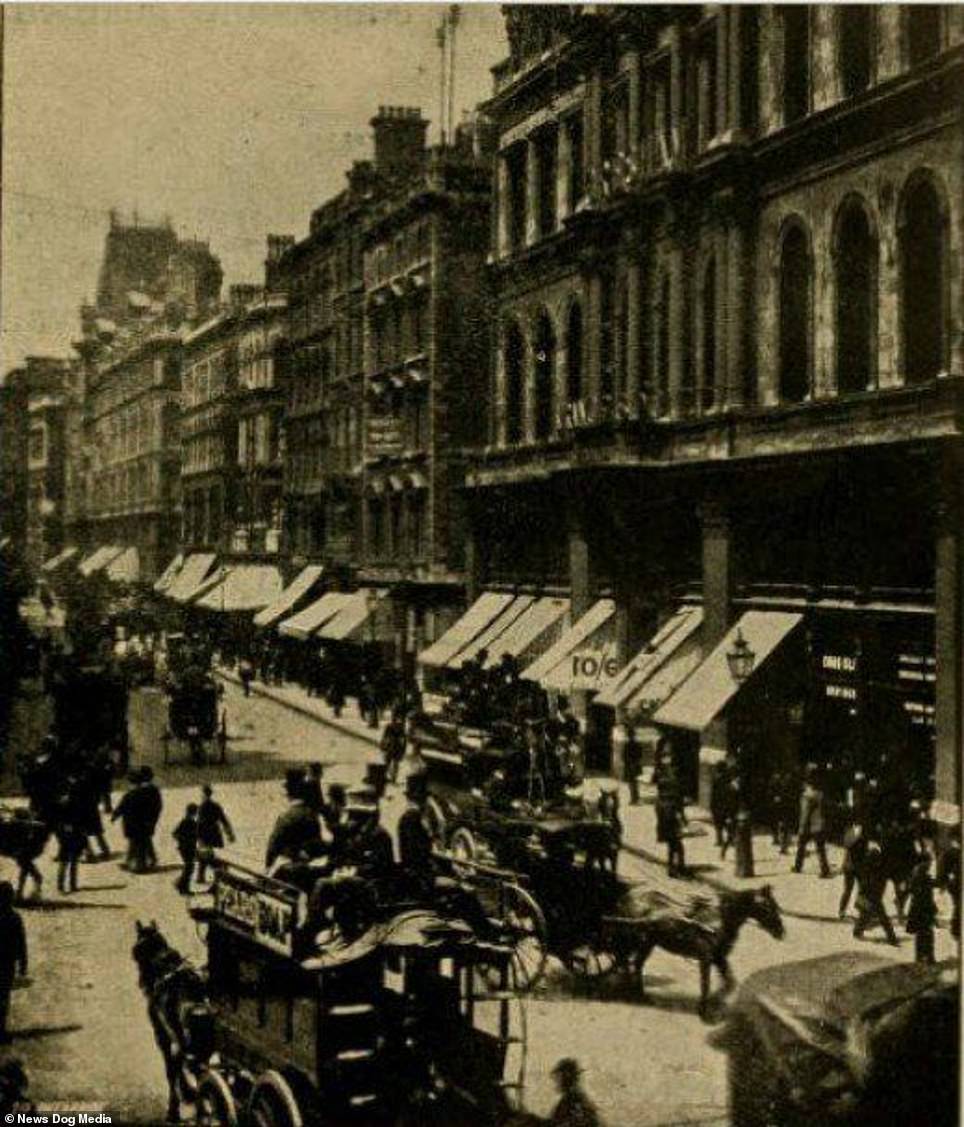 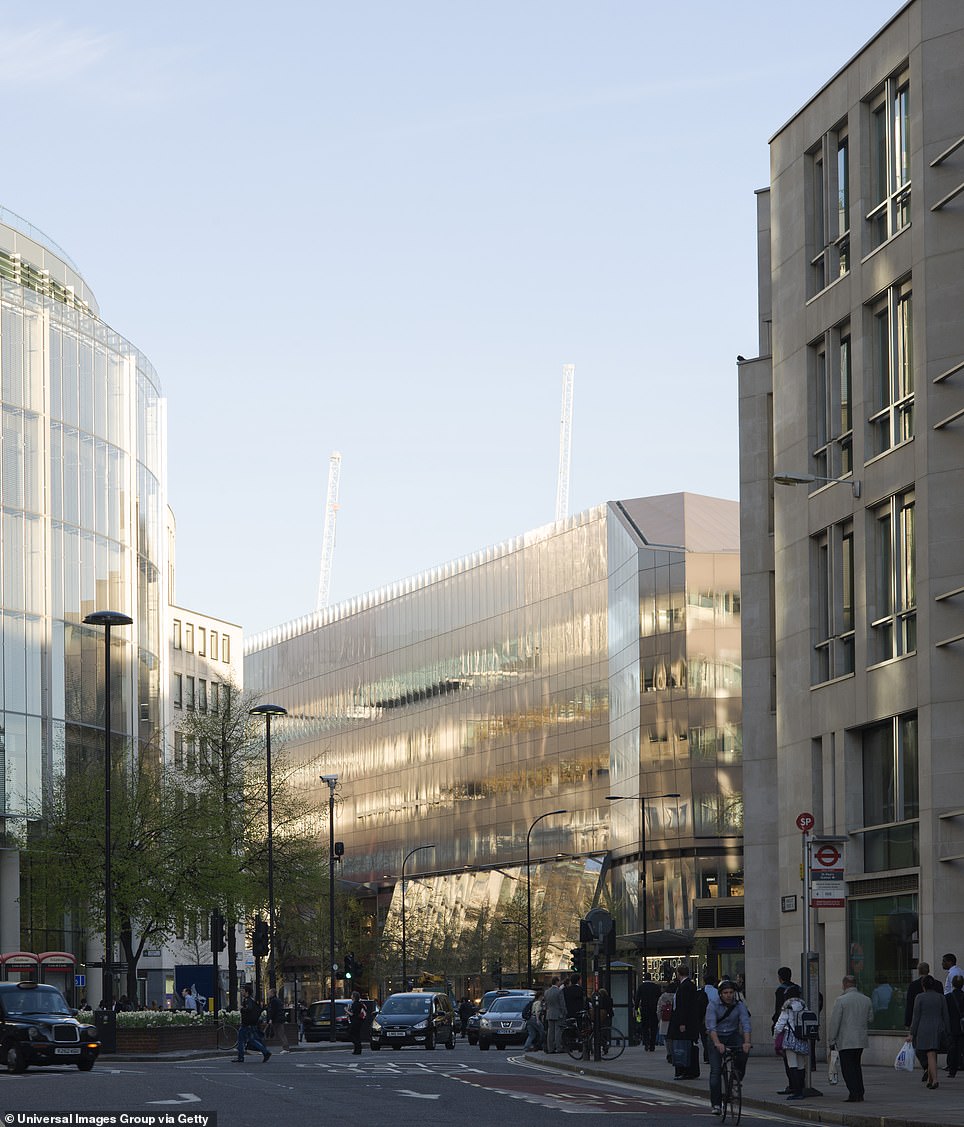 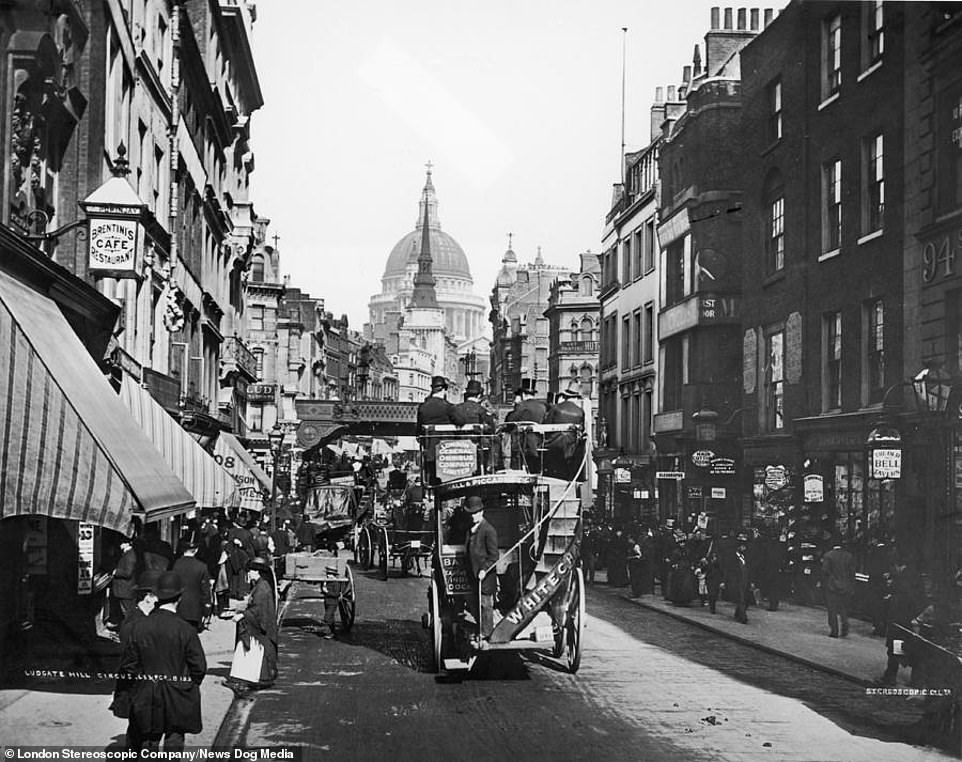 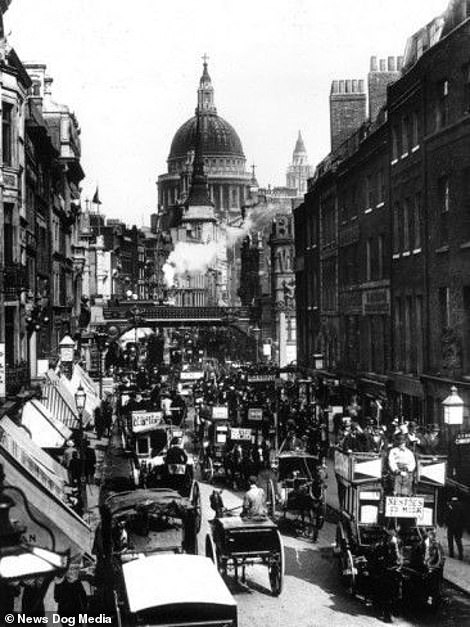 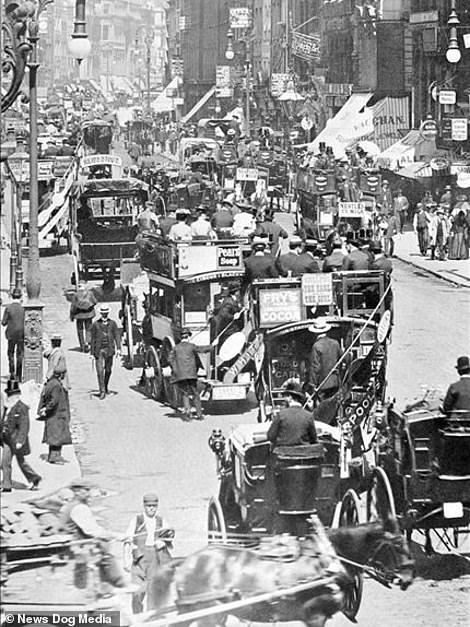 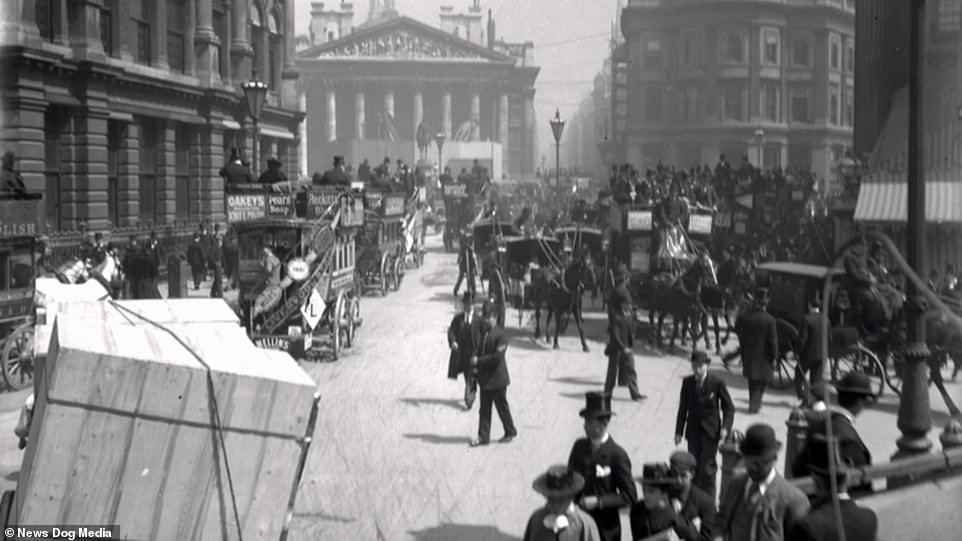 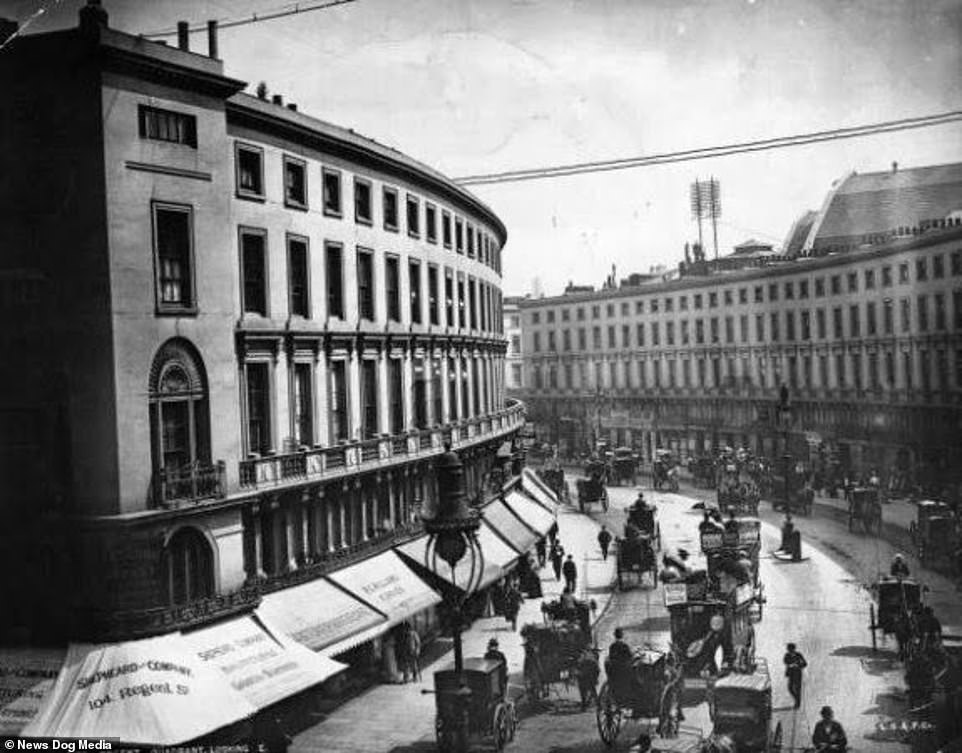 A view of the Regent Quadrant in around 1890. The area and street was named after George, Prince Regent (later George IV) 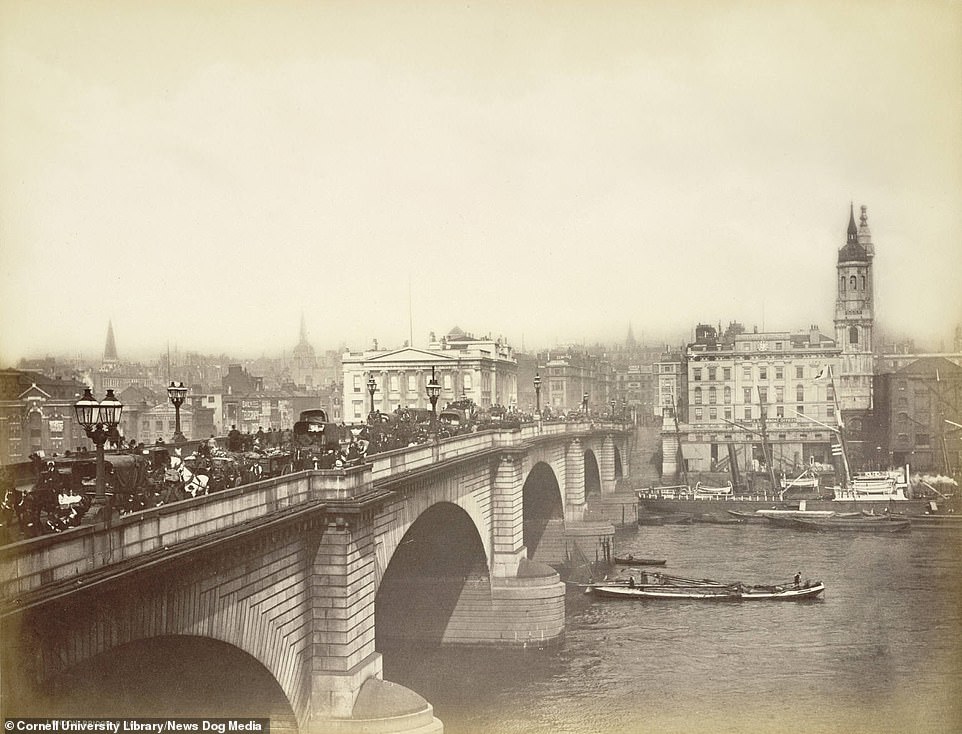 Commuter chaos on London Bridge in around 1870, with boats moored by the side of River Thames seen to the right 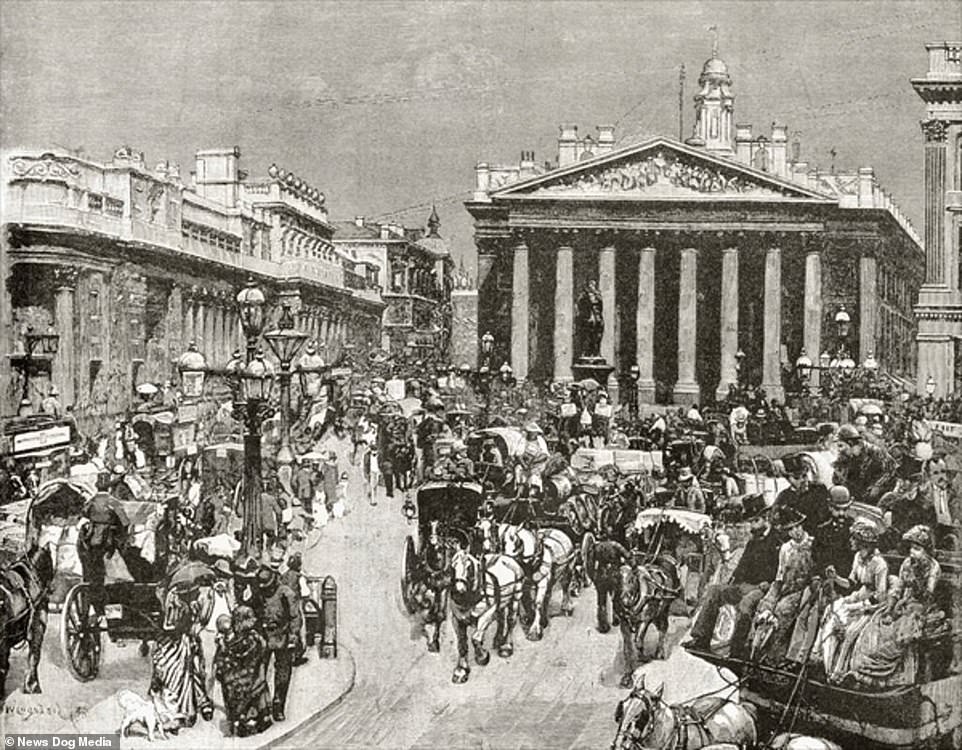 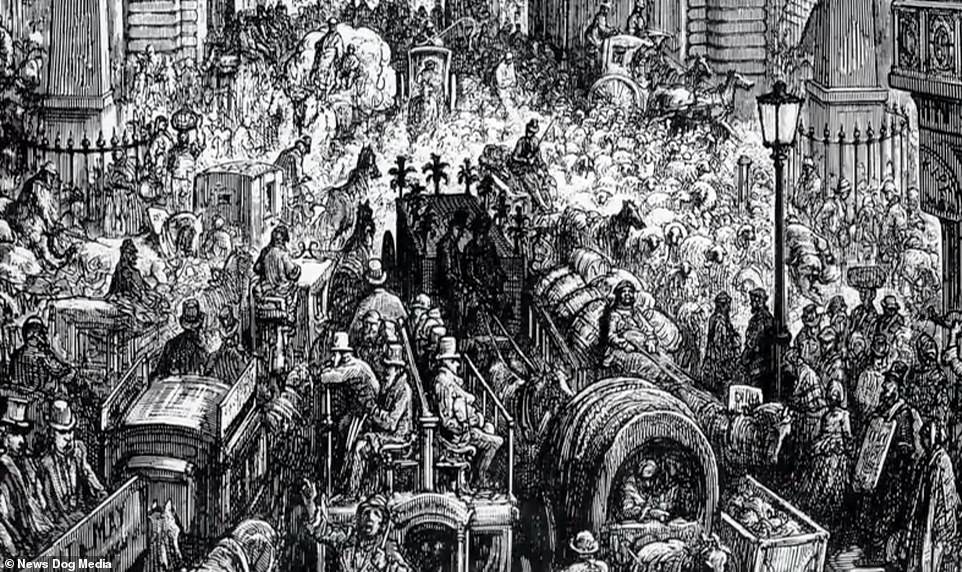 A drawing of a seriously congested Ludgate Hill, complete with herds of sheep competing for space with people in 1872 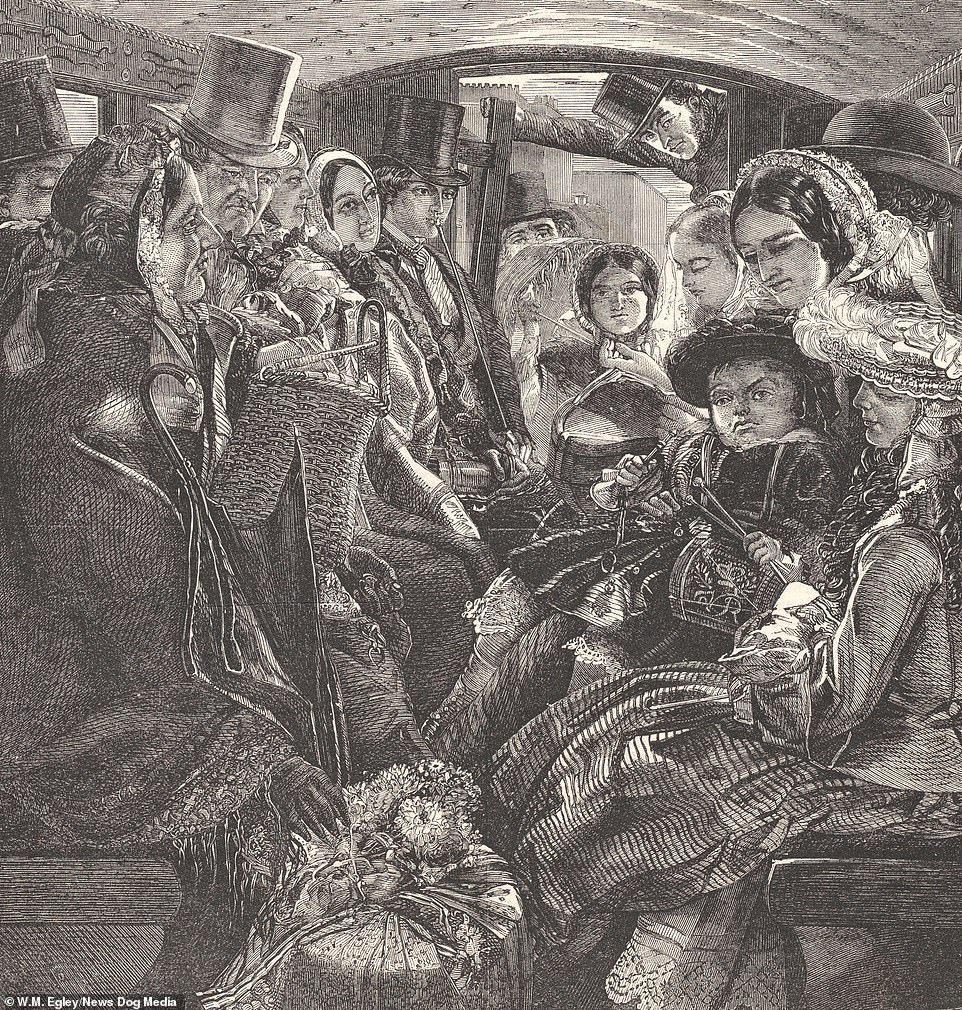 The omnibus was a carriage pulled by horses that fit about 12 people inside in cramped conditions, as drawn above in 1859 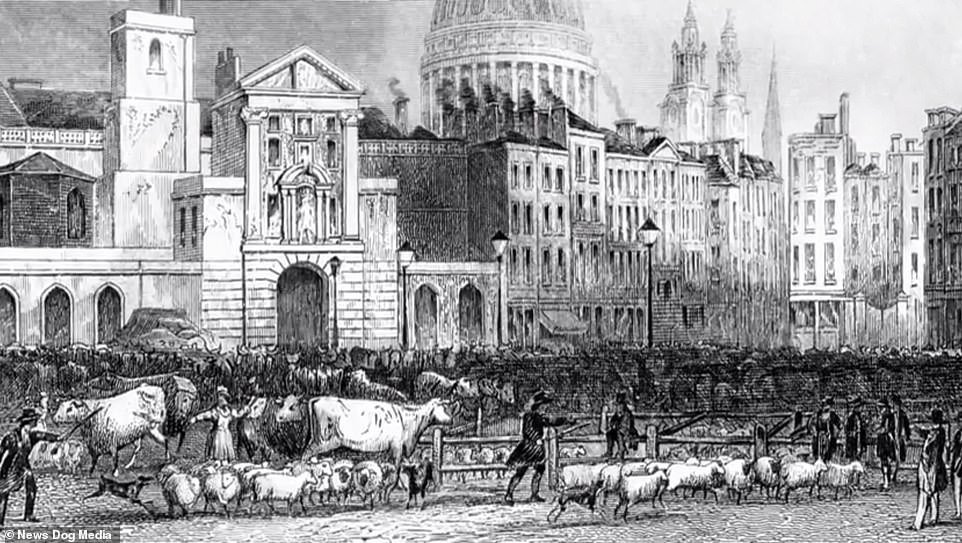 A drawing of Smithfield cattle market in 1848. Dickens referred to it as being ‘covered, nearly ankle deep, with filth and mire’ 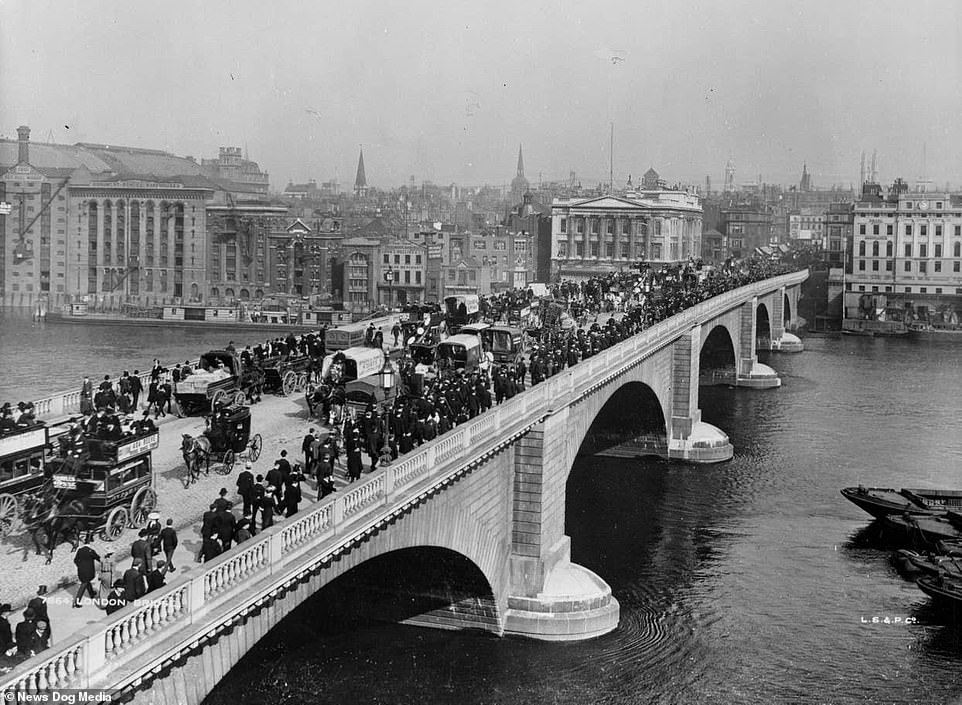 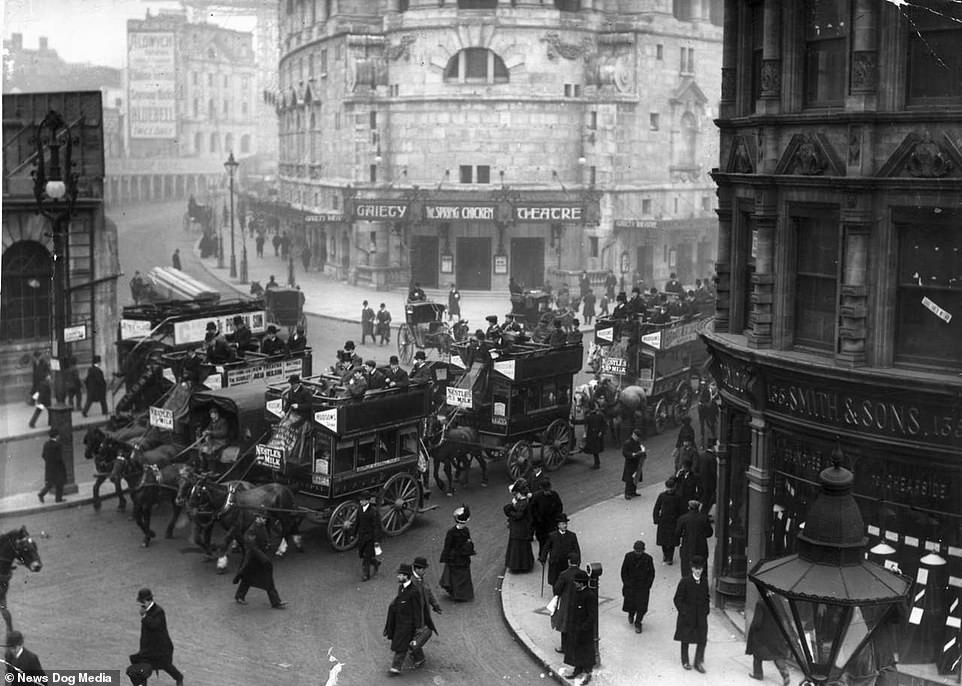 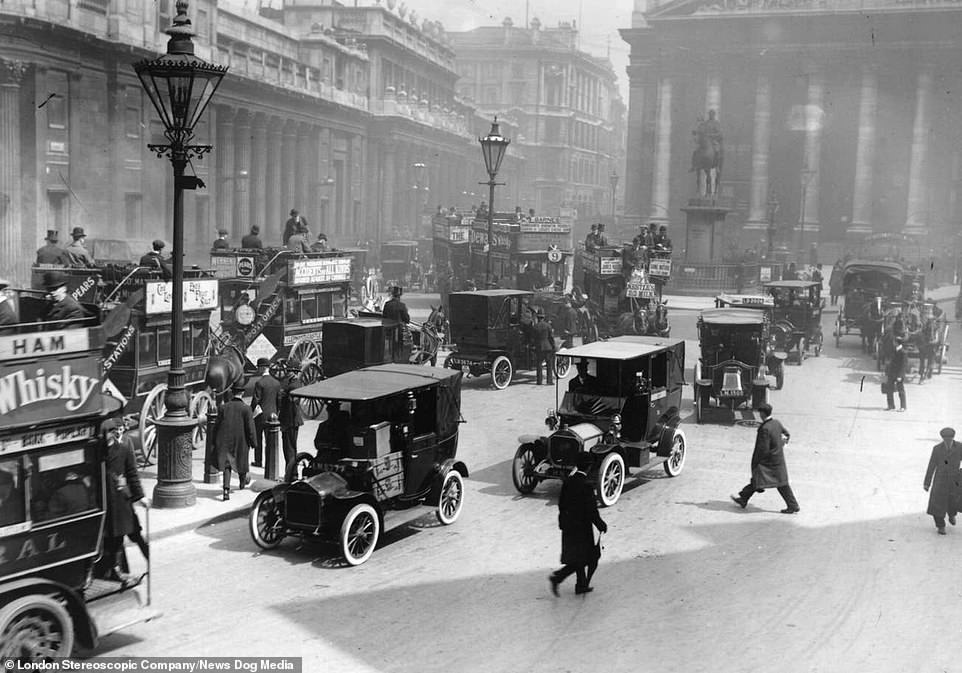 Traffic outside the Bank of England and Royal Exchange in 1910. It was said to have been at its busiest between 11am and 5pm