Virgin Australia’s board made a last-minute plea for $100 million from the Federal Government to pay its bills for the next fortnight, but the request was refused and the airline collapsed into administration.

Major international shareholders agreed to put Australia’s second-biggest airline into voluntary administration at a board meeting late on Monday after the request was rejected, The Australian reported.

Virgin Australia is 90 per cent foreign-owned, with Singapore Airlines, Etihad Airways and Chinese conglomerates HNA Group and Hanshan owning 80 per cent between them, while Richard Branson’s Virgin Group still owns 10 per cent.

Virgin Australia founder Richard Branson, who still owns 10 percent of the company, said he is borrowing against his private island to try to save jobs across the Virgin group. He was unable to stop Virgin Australia from being put into voluntary administration on Monday 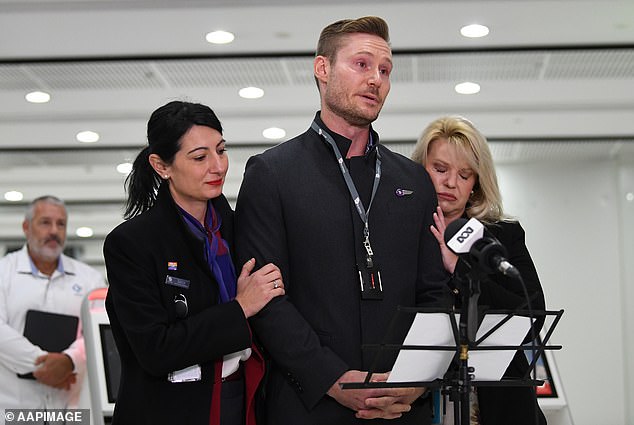 The development has extinguished the airline’s foreign ownership and an administrator – expected to be Deloittes – will be appointed to determine the best path forward for the airline, its owners and its creditors.

The airline is expected to make a formal announcement on Tuesday.

Virgin Australia could be broken up or kept intact and sold with a possibility that the Federal Government or superannuation fund could buy an ownership stake.

The underlying business can be salvaged with a debt restructure and industry expectations are that the airline will return in a scaled-down version when the coronavirus pandemic is over.

The move has struck fear into the hearts of 16,000 direct and indirect employees of the airline who are worried they will lose their jobs.

While the company can continue to trade in administration, most staff were stood down temporarily last month because of the coronavirus lockdown.

A legal workaround is being sought so that all 16,000 staff can get their $750 per week JobKeeper payments while the company is in administration. 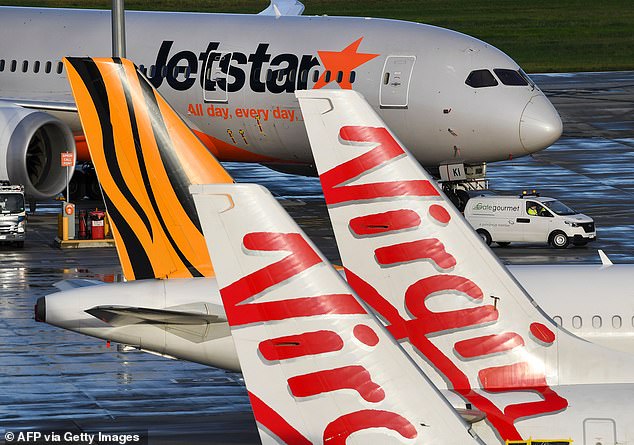 Virgin Australia is majority owned by China, Abu Dhabi and Singapore. Now it is in voluntary administration the foreign ownership is effectively extinguished but the company can continue to trade while the administrators decide on the best path forward

Staff members publicly begged for help for their airline on Friday, while the Transport Workers Union urged the Federal Government to work with any administrators to save their jobs.

The low-cost domestic carrier had been grappling with a $5billion debt and it is understood the $100 million would only have kept it afloat for a week or two at the most.

It is expected that Virgin Australia’s existing management team will remain in place during the administration period during which the focus will be on debt restructure.

Private equity firms including BGH Capital are known to be circling the stricken airline which had been asking the NSW and Queensland Government for help.

The Queensland Government offered a $200 million bailout which fell far short of the a $1.4 billion loan the airline had sought from the Federal Government.

Ratings agencies Moodies and Fitch both downgraded the airline’s credit rating, making it harder for Virgin to borrow money.

Moodies said on Monday creditors would likely suffer an economic loss relative to the value of the debt obligation, no matter what the outcome of the current situation.

The company is understood to have minimal cash available to borrow under its credit facilities.

Treasurer Josh Frydenberg said on Monday that the company should first look to its shareholders for a bailout.

‘The first point of call, for the company, must be its existing shareholders,’ Federal Treasurer Josh Frydenberg said on Monday.

‘They have some very big shareholders with deep pockets’

‘Namely China-related companies as well as Etihad and Singapore Airlines.’

Neither Singapore nor Abu Dhabi offered to bail out the carrier, and it is expected that the Federal Government would not allow China to own a majority stake in a strategic transport firm.

Virgin Australia founder Richard Branson, who retains a 10 percent stake in the airline, said he was raising money against Necker Island, his home in the British Virgin Islands, to try to save as many jobs as possible around the Virgin Group worldwide – however with multiple businesses including Virgin Atlantic in trouble, it is not expected he would have enough to refinance Virgin Australia.

The British entrepreneur wrote an open letter on Monday in which he praised the ‘brilliant’ staff who were ‘fighting to survive’ the coronavirus catastrophe.

‘If Virgin Australia disappears, Qantas would effectively have a monopoly of the Australian skies. We all know what that would lead to,’ he said on the Virgin website.

Mr Branson was referring to the possibility that if Virgin Australia were to leave Australian skies then Qantas would have no competitor, leading to rising airfares from a lack of competition.

Aviation consultant Neil Hansford told The Australian that airfares could increase up to 20 percent in such a monopoly, but were not likely to return to the expensive fares of the past when it could cost $700 to fly one way from Sydney to Melbourne. 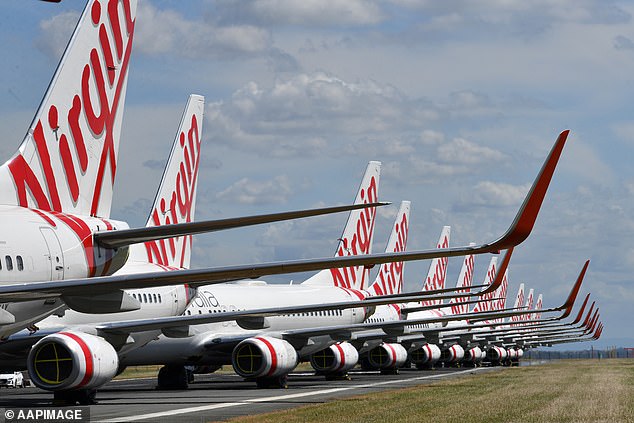 Domestic tourism operators are terrified that if Virgin Australia’s fleet is removed from the skies that a Qantas monopoly would cause airfares to rise, killing their businesses

‘I think (Australian Competition & Consumer Commission chairman) Rod Sims will be all over Qantas like a bad-fitting suit,’ he said.

The collapse of Virgin Australia sent shockwaves through the domestic tourism industry which fears rising airfares could destroy their businesses that are already in hibernation, earning little income under coronavirus lockdown.

‘Flying to destinations will no longer be as affordable and this will be devastating,’ said Destination Gold Coast chief executive Annaliese Battista.

‘We are going to have to recalibrate our marketing efforts to drive traffic into a monopolised market,’ she told the Gold Coast Bulletin.

‘The market solution probably means administration and a sell-off, and this is when the vultures start circling and the sharks start picking away at the profitable bits and they jettison the less profitable routes,’ he told The Australian.

NSW engaged in a bidding war in an attempt to entice Virgin Australia south from Queensland even as it was reported the airline was heading into voluntary administration.

Queensland earlier on Monday declared it would ‘stop at nothing’ to keep Virgin Australia headquartered in Brisbane.

NSW has announced it could offer a financial lifeline if the airline moved its base to the new Western Sydney Airport.

‘We’re thinking about what we can do to keep as many jobs going now, but also how we can actually start recovering the economy,’ NSW Premier Gladys Berejiklian told reporters on Monday.

‘If that means encouraging businesses to set up shop in NSW, if it means bringing jobs to our state, we will, of course, consider all those things.’

‘NSW might want to bring a pea-shooter to the fight. We will bring a bazooka and we’re not afraid to use it,’ he said.

‘At a time when their jobs hang in the balance, the 1200 Queensland families who depend on those head office jobs should not have to face the threat of being forced to move to Sydney,’ he said when urging a national response.

WHERE TO GO FOR HELP

* Tax relief: if you have a debt to the tax office you can’t pay call the Australian Tax Office emergency support infoline on 1800 806 218

* Unexpected bills for essentials: don’t go to high-interest payday lenders. No-interest and low-interest loans of up to $3000 available from Good Shepherd Microfinance.

* Utility providers will negotiate a payment plan to keep the power, water and gas on – ring them

* Access up to $10,000 of superannuation early this financial year, see here

* Centrelink advance payments are available in some circumstances

* You can get rent assistance from Services Australia if you are on a JobSeeker payment.

* Ask your employer to register on the ATO website ato.gov.au to keep your job going during the coronavirus shutdown so you can get $1500/fortnight