Australia’s GST could increased and be broadened to include fresh fruit and vegetables with a compensation package for the poor as coronavirus erodes government revenue.

Professional services giant PwC has assessed how the federal government could raise extra revenue to pay for programs designed to offset the effects of the COVID-19 lockdowns, including the $70billion JobKeeper wage subsidies scheme.

PwC said it could be achieved by raising the Goods and Services Tax, which has remained at ten per cent since it was introduced in July 2000.

Raising it to 12.5 per cent would raise an additional $14.5billion a year.

PwC, previously known as PricewaterhouseCoopers, calculated that revenue would jump to $40billion if the GST base was broadened to include fresh fruit and vegetables, education and childcare, which have been exempt for two decades.

Broadening the GST base but keeping the tax at ten per cent would raise an extra $20.7billion.

PwC said any increase in the GST or inclusion of essential items would require compensation for the poor.

‘Broadening the GST base and/or increasing the rate of GST will affect low-income households the most, in that more of their income would be required to pay the increased GST,’ PwC said.

‘The critical issue for implementation of any reform of Australia’s GST will be an accurate understanding of the impact on low-income earners and designing robust compensation for that.’

The consumption tax increase would also have to include compensation for low-income earners, who already spend a higher proportion of their income on the GST. Pictured is a Sikh volunteer distributing vegetarian meals at Kensington in Melbourne’s inner north-west following the lockdown of housing commission flats

The PwC report also noted Australia’s existing tax system was ill-equipped to deal with crises like COVID-19 which has ‘resulted in ballooning government expenditure and shrinking government revenue’.

CANADA: 5 per cent federal GST plus provincial retail sales taxes of six to ten per cent

‘Australia’s GST collections have also not kept pace with the overall rate of growth in the economy, in part because people are spending a higher proportion of their income on areas that are currently exempt, including housing, health care and education,’ he said.

‘Our GST rate of ten per cent is one of the lowest among developed economies, and even at 12.5 per cent, would still be well below the OECD average of 19.3 per cent.’

New Zealand, Australia’s nearest neighbour, has a 15 per cent GST, with the rate rising from 12.5 per cent in October 2010.

The United Kingdom has an even heftier 20 per cent Value Added Tax with exemptions for food and children’s clothes, with the rate increasing from 17.5 per cent in January 2011.

Singapore has a much lower seven per cent GST.

Canada has a five per cent GST at a federal level plus provincial retail sales taxes that range from six per cent to ten per cent. 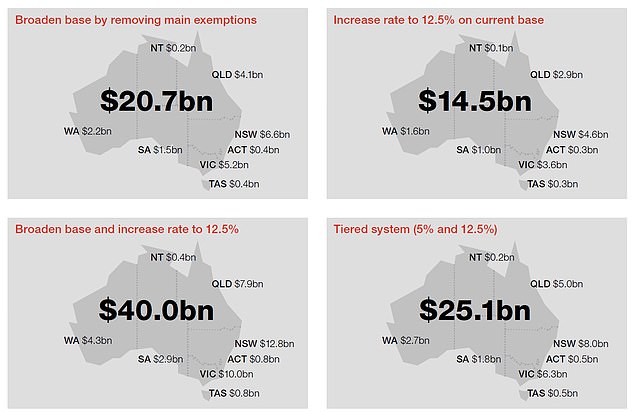 Raising it to 12.5 per cent would raise $14.5billion a year. PwC, previously known as PricewaterhouseCoopers, calculated that revenue would jump to $40billion if the GST base was broadened to include fresh fruit and vegetables, education and childcare

The United States doesn’t have a national sales tax, with states, cities and counties charging their own taxes.

Foods that are GST free

Tea and coffee (unless ready-to-drink)

All meats but not pet food

New South Wales Treasurer Dominic Perrottet has called for the GST to either be increased or broadened so the states and territories can abolish inefficient payroll and property stamp duty taxes.

The federal government collects the GST and distributes it to the state and territories via the Commonwealth Grants Commission.

In 1999, the Australian Democrats led by Meg Lees only agreed to pass then Liberal prime minister John Howard’s GST package through the Senate if fresh food and a range of other items were exempted.

Labor was opposed to the GST, campaigning against it at the 1998 election, while the Australian Democrats were divided over the issue before conditionally backing it – precipitating the virtual collapse of the party.

Mr Thorpe said that even before the coronavirus pandemic, Australia’s tax system wasn’t well equipped to support economic growth with GST collections in the 2018-19 financial year – the lowest since the tax was introduced two decades ago.

‘In a properly structured reform package, GST expansion should lead to higher economic growth,’ he said.

Mr Thorpe estimated that a revenue-neutral switch from reducing income taxes while increasing the GST would boost gross domestic product by one per cent in the long-run. 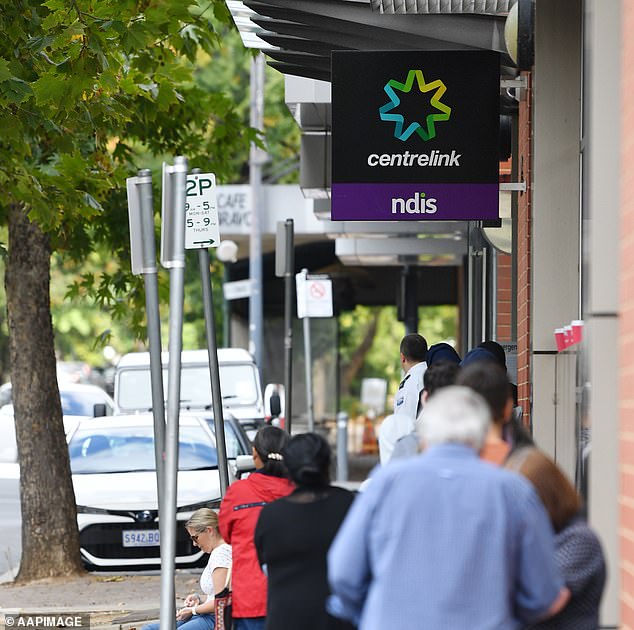 Since March, the federal government has spent $153.7billion on three stimulus programs to combat the coronavirus downturn. The JobSeeker unemployment benefit has also been temporarily increased by $550 a fortnight, on top of the usual $565.70 rate for singles, as part of a $66billion program. Pictured is a Centrelink queue at Norwood in Adelaide in April

‘The full effect on economic growth will depend significantly on how GST reform is incorporated as part of a package of reform,’ he said.

Since March, the federal government has spent $153.7billion on three stimulus welfare programs to combat the coronavirus downturn.

The bulk of that has gone towards the $70billion JobKeeper program which until the end of September is funding $1,500 fortnightly wage subsidies.

The JobSeeker unemployment benefit has also been temporarily increased by $550 a fortnight, on top of the usual $565.70 rate for singles, as part of a separate $66billion program.

Westpac, Australia’s second biggest bank, is forecasting a $230billion deficit for 2020-21 that would comprise 11.7 per cent of GDP – by far the highest since World War II.