Stylish European royals have been raiding their older generations’ closets in order to find statement pieces.

Yesterday, as she celebrated her confirmation with her family at Fredensborg Castle, Princess Isabella of Denmark, 15, wore a white blazer and jumpsuit previously worn by her mother Princess Mary, 50.

She is the latest of the very stylish European royals who have turned to the wardrobes of the older women in their families to find vintage pieces.

In January, as she turned 18, Princess Ingrid Alexandra of Norway donned a black number from Lanvin, which her mother Crown Princess Mette-Marit, 48, first wore in 2004 at the Nobel concert.

Elsewhere, also in January of this year, Queen Letizia of Spain, 49, turned heads when she wore a Valentino number her mother-in-law Queen Sofia of Spain, 83, first wore during a state visit to Germany in 1977.

Here, Femail takes a look at how these thrifty royals struck gold by wearing luxury hand-me-downs…

Princess Isabella of Denmark, 15, (pictured) wore a white blazer previously worn by her mother in 2017, for her confirmation

For her confirmation Princess Isabella of Denmark, 15, styled her mother’s blazer and jumpsuit from Italian brand Max Mara with nude open toe sandals and a delicate pearl brooch.

The young royal looked youthful with rosy cheeks, natural makeup and her brunette locks loose, curled over her shoulders.  She also had her nails done for the occasion – pearly pink acrylics.

When her mother wore the same outfit in 2017 whilst visiting Danish jewellery brand Olen Lynggaard, in Stockholm, she opted for snakeskin stilettos and a larger golden leaf designed brooch.

In an elegant fashion she pulled her hair up and donned natural makeup with a dusky pink brown lipstick.

Like her mother Princess Isabelle wore silver diamond stud earrings and with a ring to match her brooch.

In January, as she turned 18, Princess Ingrid Alexandra of Norway donned a black number from Lanvin, which her mother Crown Princess Mette-Marit, 48, first wore in 2004 at the Nobel concert.

The young stylish royal wore her brunette locks loose and chose some simple yet dazzling gold and diamond drop earrings. She kept her makeup neutral and styled the dress up with an assortment of rings.

Over a decade ago in 2004 Princess Alexandra’s mother Crown Princess Mette-Marit first wore the dress at the Nobel Concert in Oslo.

With more bling than her daughter the Crown Princess wore silver sandals, with a patterned stitch and large silver earrings with an intricate design.

Her blonde bob was semi-tightly curled and she held a tiny noughties black satin bag. 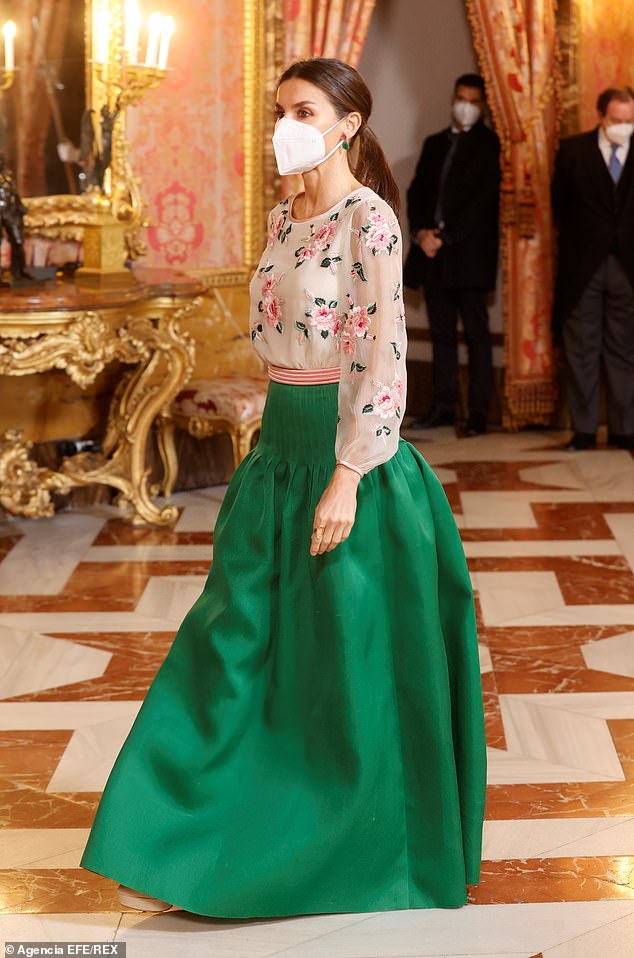 Queen Letizia of Spain, King Felipe VI’s wife, 49, sported a Valentino number Queen Sofia, 83, wore during a visit to Germany 44 years ago during a ceremony at Zarzuela Palace in January 2022

Queen Sofia, now 83, pictured donning the same Valentino outfit in 1977 during her visit to Germany

Also in January of this year, Queen Letizia of Spain, 49, turned heads when she wore a Valentino number her mother-in-law Queen Sofia of Spain, 83, first wore during a state visit to Germany.

The vintage number consists of a large floor-length green skirt and a delicate pink floral blouse. Letizia updated it with a new pink belt for a diplomatic reception at the Royal Palace, in Madrid.

Letizia stayed true to the aesthetic of Sofia’s outfit and kept her accessories to a minimum.

Sofia, who was 39 when she wore the Valentino number, cinched the top at the waist with a bow and had also chosen to pair the outfit with a sparkling diamond necklace and matching bracelets and earrings.

Princess Beatrice and the Queen 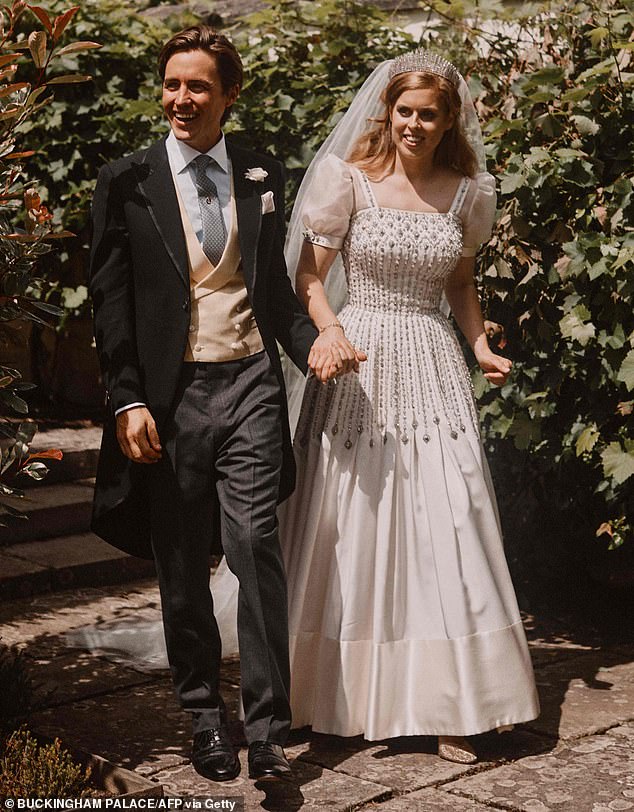 Princess Beatrice, 33, pictured on her wedding day with husband Edoardo Mapelli Mozzi. Beatrice wore a dress she borrowed from her grandmother, the Queen 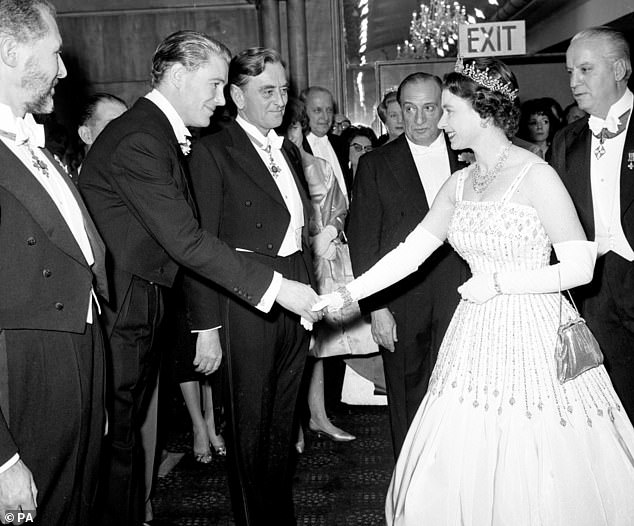 Queen Elizabeth pictured wearing the Norman Hartnell dress arriving at the Odeon, Leicester Square for the world charity premiere of the film Lawrence of Arabia, in December 1962

Princess Beatrice admitted it was an ‘honour’ to wear the Queen’s dress on her wedding day in July 2020.

The Queen’s granddaughter, 34, married property developer Edoardo Mapelli Mozzi in secret on July 17 2020 at the Royal Chapel of All Saints at Royal Lodge in Windsor.

For her big day she borrowed her grandmother’s Norman Hartnell gown.

Her Majesty, 96, wore the stunning vintage gown to a State dinner for the Italian Prime Minister in Rome in 1961 and to the premiere of Lawrence of Arabia at the Odeon in London’s Leicester Square in 1962.

Small adjustments were made to the gown by the monarch’s dresser Angela Kelly and designer Stewart Parvin for Beatrice’s wedding day, including the addition of cap sleeves embroidered with vintage diamantés.

The Queen also loaned Beatrice the Queen Mary Fringe tiara she wore herself when she married Prince Philip in 1947. 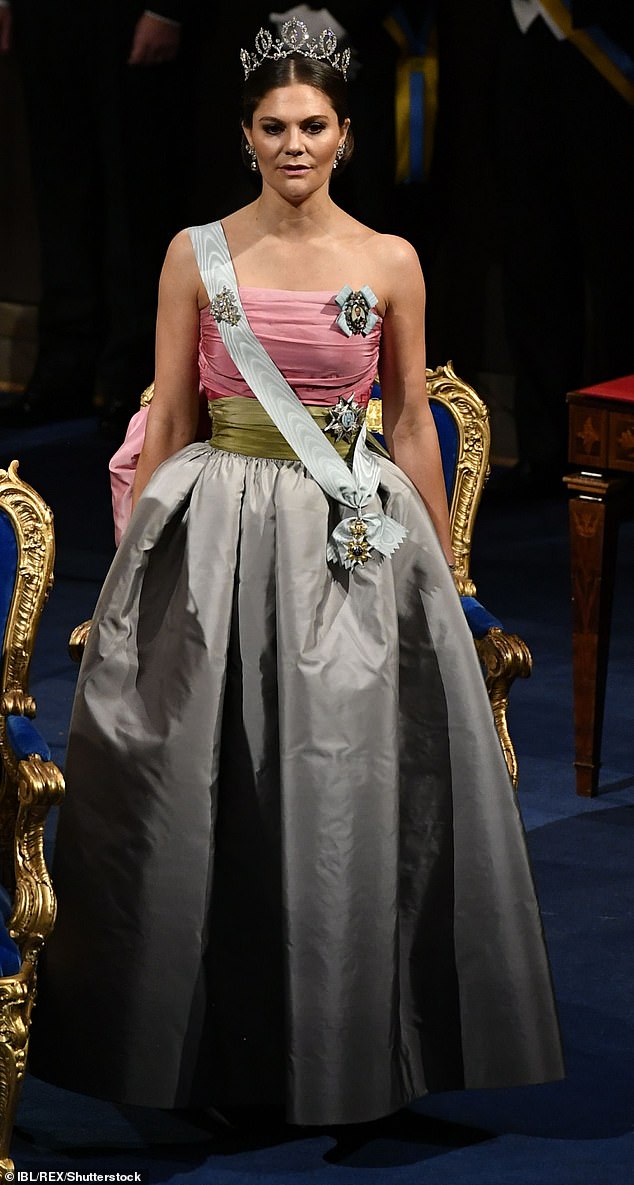 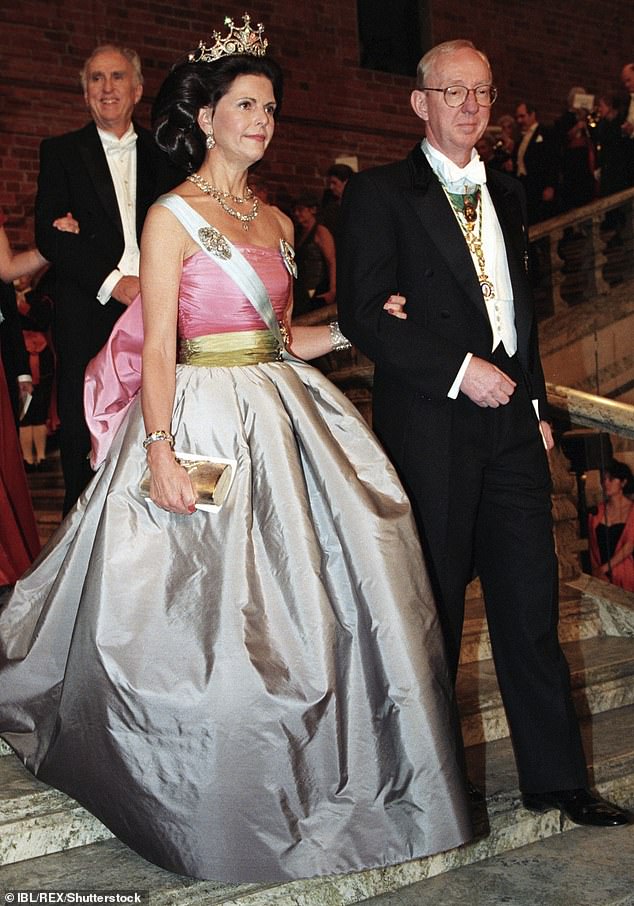 Queen Silvia of Sweden pictured in 1995 at the Nobel Prize Ceremony. She paired the showstopper gown with a spectacular tiara and ceremonial sash

And it’s not just in recent years that royals have been wearing luxury hand-me-downs, with Crown Princess Victoria of Sweden appearing to be ahead of the curve when the 44-year-old wore a vintage Nina Ricci ball gown to the Nobel Prize Ceremony on December 10, 2018.

The dress was first worn by Victoria’s mother, Queen Silvia of Sweden, to the Nobel Prize Ceremony back in 1995.

The gown features a ruched candy pink and green bodice with a full grey skirt in the same satin effect material. An oversized pink bow at the back of the gown adds a dramatic flair to the piece.

Victoria, who attended the ceremony with senior royals, paired the showstopper with a spectacular tiara and a ceremonial sash.

Queen Silvia, 78, looked just as radiant when she sported the gown, wearing it with the same ceremonial sash and her own glittering tiara.