Imagine owning an idyllic countryside plot of land where you can build your dream home.

That’s the fortunate position retired restaurateurs Bill and Sukie Barker found themselves in.

The nature-loving couple lived in a house on six acres of land in the Scottish Borders.

But they wanted a second property after running out of space to house their many regular visitors. This included eight children, ‘lots of grandchildren’ and friends from all over the world.

Using a kit house that they arranged to be made from locally-sourced wood, the couple amazingly had a completed two-bedroom property just five weeks after the first log was laid.

While this final figure didn’t include the cost of the land – as they already owned it – it covered all the furniture, and fixtures and fittings. 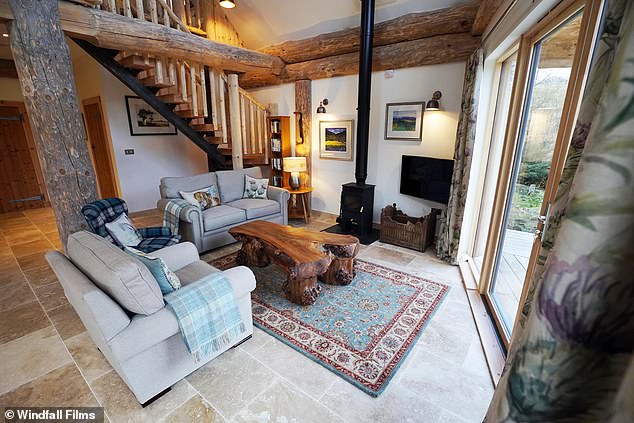 Talking about their current home, Bill explained: ‘We enjoy nothing more than having friends and family around the table.

‘It has caused some log jams in the house where we don’t have enough room. Sometimes, it is not just full, it is bursting.’

And Sukie added: ‘We have a fairly big house, but not big enough. We grow most of our own food here. And using local timber to build a house is important to me.’

The couple decided on a kit home, using timber from the forest nearby. But they had to overcome weather delays, building miscalculations and broken machinery to complete the build.

The initial budget of £100,000, saw them hoping to rely on friends and family to help with the build.

But, in reality, they ended up hiring a professional builder to help with concrete foundations – that they had initially hoped were not required. 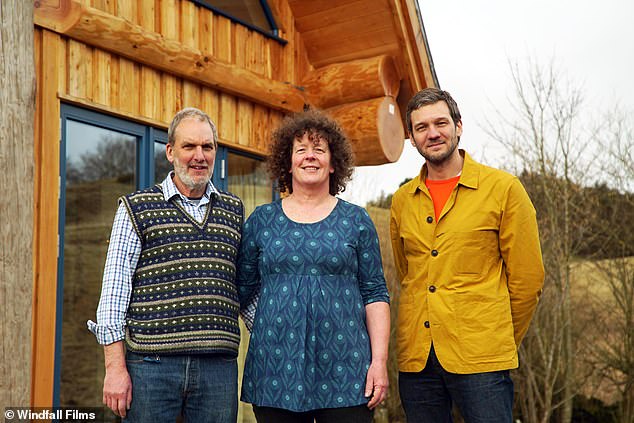 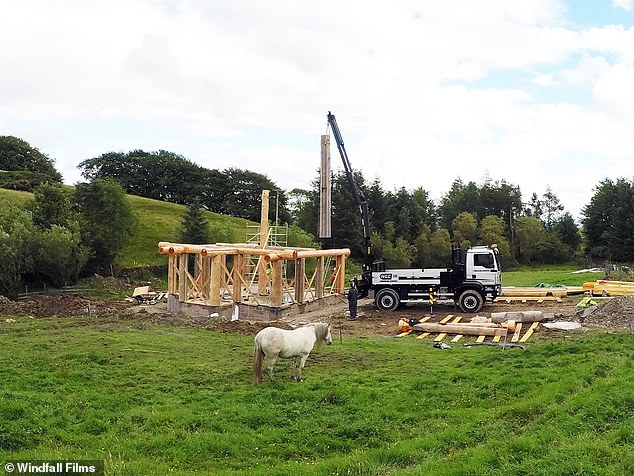 The build was prepared off-site, and only took six hours to complete the exterior walls on-site 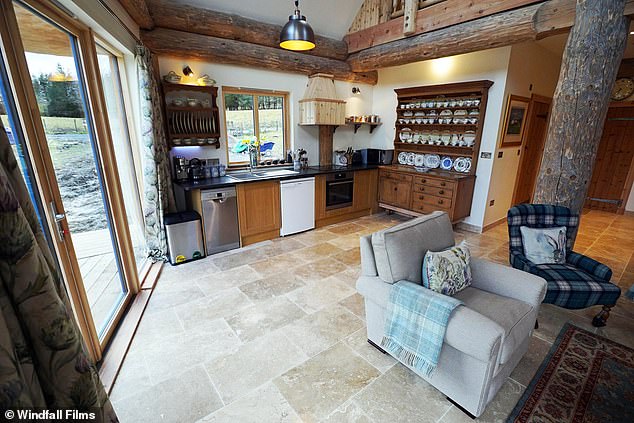 The interior has a warm and comfortable feel, with the couple using furniture they already had

The timber build was prepared off-site, and then shipped and assembled on-site.

But, as the programme on More4 reveals, the concrete foundations did not match the measurements of the timber structure.

The show’s presenter Charlie Luxton explained: ‘While there are many benefits of off-site construction, there is always a real risk that when you bring all the different components together on-site, they just won’t quite fit.

‘So one of the key skills of a good builder is to be able to problem solve and think on your feet.’

The builder responsible for the timber section of the build did just that and came up with a solution, meaning the construction could continue.

Bill said: ‘We got off to a bad start with the concrete foundations. But the timber builder came on-site and resolved it.

‘He loved working with wood and the final part of the build was really enjoyable, which is quite unusual. The thing is to get skilled people in, who enjoy their work.’

In total, it took just six hours to complete the exterior walls of the house, with a further four hours to put the final structural log in place.

The roof took a further three weeks, while the interior walls were also installed. Five weeks after the first log was put into place on-site, the shell was complete. 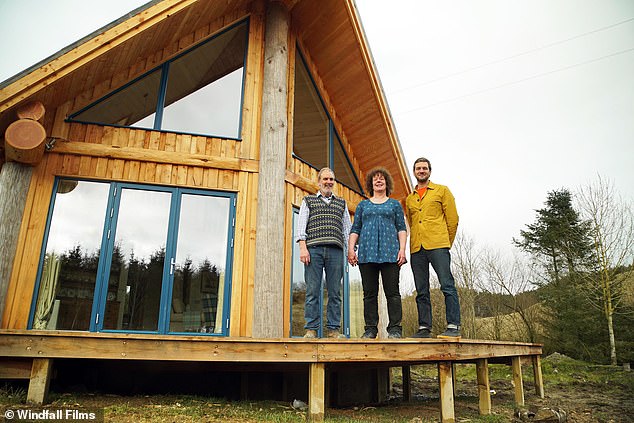 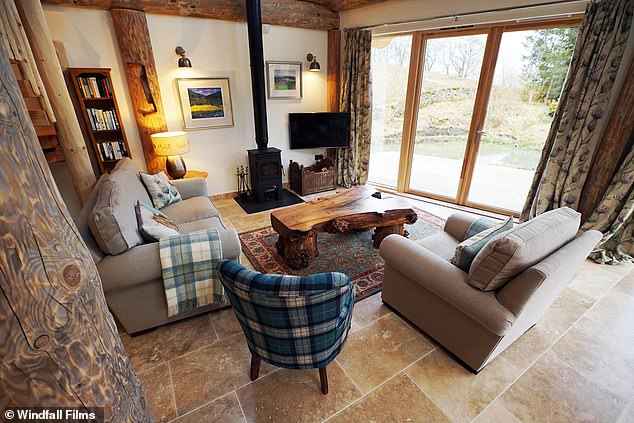 The wall of glass provides views of the surrounding Scottish countryside

During the programme, Charlie added: ‘We all dream of realising our perfect home, it may be deep in the forest or nestled in rolling hills.

‘Conventional building in locations like these can be difficult if not impossible.

‘But a new wave of kit homes is allowing families to construct a house in almost any location whatever the challenges.’ 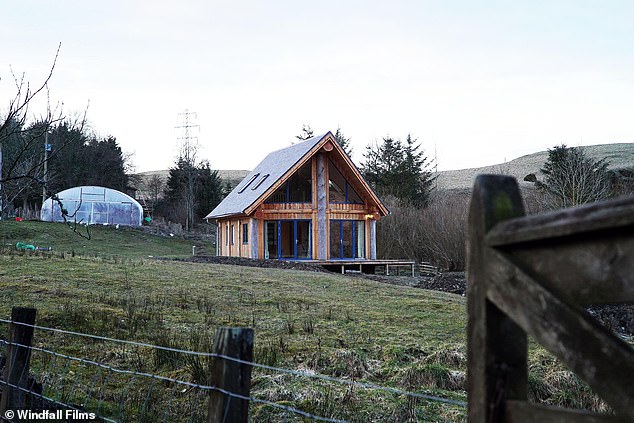 A kit house: Five weeks after the first log was put into place, the shell was complete 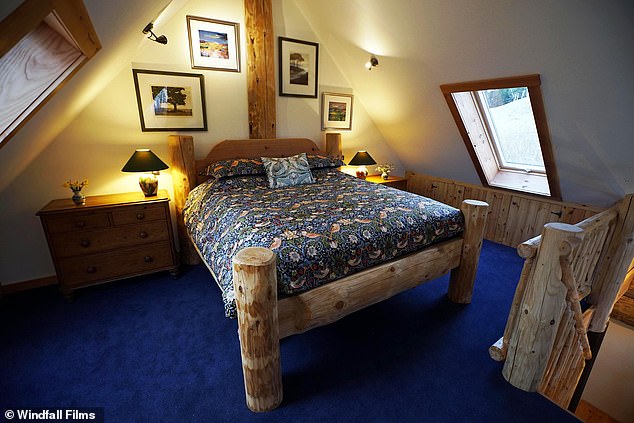 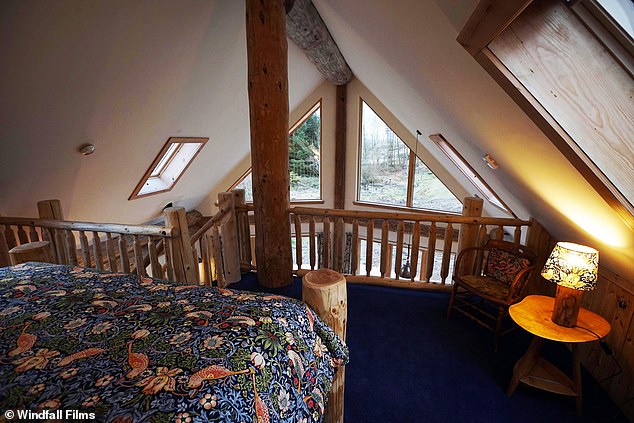 Charlie went on to tell MailOnline Property: ‘Bill and Sukie created not only a unique piece of architecture – with incredible use of local timber in the frame and all the beautiful finishing – but they created a home that really spoke to the great landscape of the Scottish borders.

‘The project was truly a family endeavour – everything from laying the foundations to finishing the build – and something they could all get involved with.

They have a lovely smallholding with geese, chickens, horses, a veg garden, and now this amazing house – it’s a really wonderful environment.

‘Cost-wise, I would say they didn’t go over budget, I think, as I often see, they actually under-budgeted at the beginning of the project.

‘To build a good sized building, with double-high spaces and a real ambition to it, they have done well.’