Howie Mandel has been rushed to the hospital after passing out and falling at a Starbucks in Woodland Hills on Wednesday.

The America’s Got Talent judge, 65, was fetching coffee with his wife Terry and friends when he suddenly fainted inside the store, prompting people to call an ambulance, according to TMZ.

DailyMail.com has reached out to Mandel’s team for comment.

Scary! Howie Mandel has been rushed to the hospital after passing out and falling at a Starbucks in Woodland Hills on Wednesday. He’s seen September 15th above

After falling Mandel was taken outside to lay down on a bench before paramedics arrived and rushed him to a hospital in nearby Tarzana, California.

It appeared that the Canadian comic was able to sit up by the time help from the Los Angeles Fire Department arrived.

Howie is said to be a regular at the shop and other customers there were shocked by the situation.

Insiders suspect the Deal Or No Deal star fainted from low blood sugar. Doctors are now said to be running tests at the hospital.

Three days ago the star posted a TikTok video from the hospital, where he had undergone a colonoscopy and endoscopy.

He tagged the video #Hospital and #recovery while seeming a bit woozy and admitting he was still under the influence of some heavy medication.

Howie has been taking it easy after wrapping season 16 of America’s Got Talent last month.

In the past, the star has been open about his struggles with Obsessive Compulsive Disorder and an intense fear of germs. 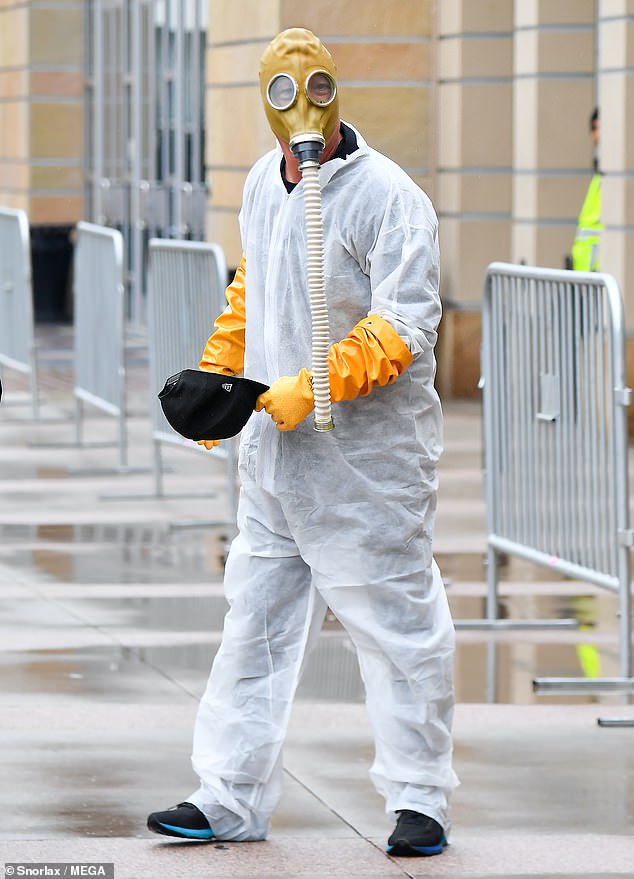 Germaphobe: In the past, the star has been open about his struggles with Obsessive Compulsive Disorder and an intense fear of germs. He’s seen in full hazmat attire in March 2020 during the start of the Covid-19 pandemic above

In June he told People he was ‘living in a nightmare’ because of the repetitive and intrusive thoughts that stem from his condition.

‘I try to anchor myself. I have a beautiful family and I love what I do. But at the same time, I can fall into a dark depression I can’t get out of,’ he explained.

He added how much comedy has helped him through the dark times, telling the magazine: ‘Comedy saved me in a way. I’m most comfortable onstage. And when I don’t have anything to do, I turn inward — and that’s not good.’