Howzat legal? Cop uses his police car and flashing lights to block a street while he plays CRICKET

Howzat legal? Cop uses his police car and flashing lights to block a street while he plays CRICKET

A cop has parked his police car in the middle of the road to play street cricket with long-weekend revellers in true Australian style.

Video footage shared by The Bell Tower Times showed the officer on strike during Australia Day celebrations in Perth’s CBD on Sunday evening.

The officer – who wore a hi-visibility vest over his uniform – stood in front of the stumps on Saint Georges Terrace as a delivery bounced slowly along the concrete.

He successfully played a cover drive, to the excitement of the fielders sprawled along the street and spectators watching on from their balconies.

The road appeared to be closed to other vehicles as there were orange traffic cones lined along the concrete and the officer’s car displayed flashing lights.

The police officer was praised for the unusual community sporting event.

The ‘legendary’ footage was also hailed as typically Australian. 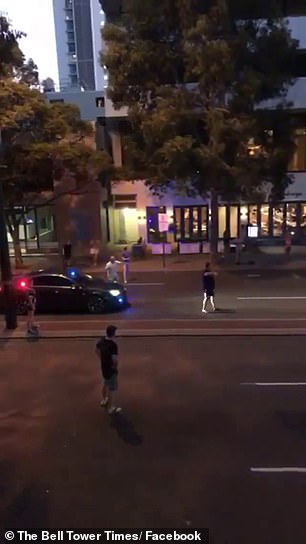 ‘I saw a guy throwing something at a police officer and then saw the cricket bat. Now that is Australia!’ another said.