Huawei has slammed former prime minister Malcolm Turnbull for banning them from installing the 5G mobile network in Australia.

The Chinese telecommunications equipment giant is ramping up its public relations campaign, four days after the Australian government revealed a ‘sophisticated state-based actor’ had been targeting companies, hospitals, schools and government officials.

Mr Turnbull’s successor Scott Morrison on Friday didn’t name China as the culprit of these cyber attacks but intelligence experts were quick to suggest Australia’s biggest trading partner was responsible.

Days before being he was replaced as PM in August 2018, Mr Turnbull banned Huawei from installing 5G mobile, adding to a 2012 prohibition on them laying cables for the National Broadband Network.

Huawei has slammed former prime minister Malcolm Turnbull for banning them from installing the 5G mobile network in Australia. He is pictured left in August 2018, the month he banned Huawei from installing 5G mobile shortly before Scott Morrison replaced him as PM

The former Liberal leader suggested his decision two years ago was now justified, in light of recent revelations.

Huawei’s history of bans in Australia

One of her Liberal successors Malcolm Turnbull extended the ban to 5G mobile in August 2018, the same month he faced two leadership challenges from Home Affairs Minister Peter Dutton that led to Scott Morrison becoming PM

‘In the not quite two years since my government made the decision to keep high-risk vendors out of 5G in Australia, [that] has been proved to be the right call,’ he told The Australian Financial Review on Tuesday.

Huawei was quick to condemn Mr Turnbull, with its chief corporate affairs officer Jeremy Mitchell issuing a statement within hours.

‘Huawei Australia is extremely disappointed in the comments made by Malcolm Turnbull in the Australian Financial Review this morning attempting to justify his government’s ban on Huawei delivering the world’s best 5G in Australia,’ he said.

‘It is completely inappropriate for Mr Turnbull to claim – as reported in the AFR – that the recent cyber-attacks on Australia by a so far unnamed foreign country justify the 5G ban on Huawei in Australia.’

‘The fact that a sophisticated state actor, almost certainly Beijing, is conducting persistent intrusive cyber attacks against a range of Australian organisations across government and many sectors of the economy simply highlights the need to secure Australia’s digital critical infrastructure,’ he told Daily Mail Australia.

Mr Shoebridge said the revelations of recent days justified the 2018 ban on Huawei installing 5G, which is also policy in the United States. 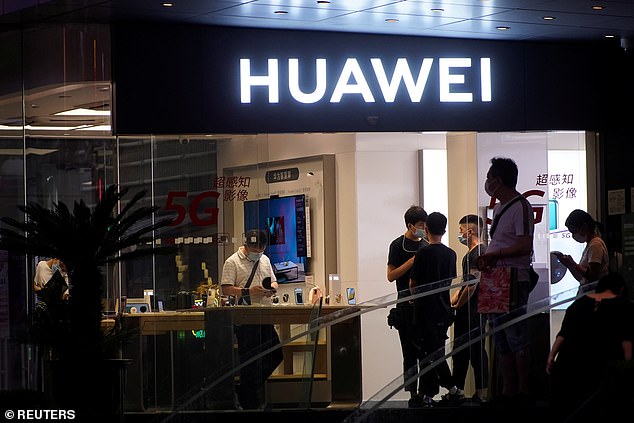 The Chinese telecommunications equipment giant is ramping up its public relations campaign, four days after the Australian government revealed a ‘sophisticated state-based actor’ had been targeting companies, hospitals, schools and government officials. Pictured is a Huawei shop in Shanghai on June 18, 2020

‘Giving the technology firms of a country whose government conducts such cyber attacks against Australia the ability to build key chunks of our digital backbone in the form of 5G would only give that state access to be even more successful cyber intruders than they are without such internal access and knowledge,’ he said.

‘It’s hard to see how that could be in Australia’s interests – or the interests of other governments internationally who face the same risks.’

On Friday, intelligence sources told the ABC that China’s hacking of Australian data bases was a retaliation at Huawei being barred from installing 5G.