To mark its 30th anniversary the Hubble Space Telescope team have released a stunning new image captured by the satellite showing a vast star-forming region.

Named the ‘tapestry of blazing starbirth’, the new image brings together the nebula NGC 2014 and its neighbour NGC 2020 – both about 163,000 light years from Earth.

They are part of the Milky Way satellite galaxy the Large Magellanic Cloud and the image ha been nicknamed the ‘Cosmic Reef’ as it looks like an undersea world.

Hubble was launched on April 24, 1990 on the Space Shuttle Discovery and has ‘revolutionised modern astronomy’, according to the European Space Agency. 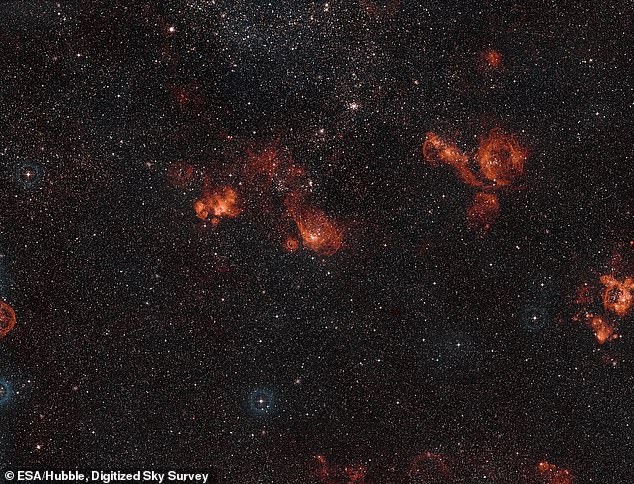 This wide-field view captures the pair of nebulae NGC 2014 and NGC 2020 in the constellation of Dorado. These two glowing clouds of gas, in the centre of the frame, are located in the Large Magellanic Cloud, one of the Milky Way’s satellite galaxies

‘The Hubble Space Telescope has shaped the imagination of truly a whole generation, inspiring not only scientists, but almost everybody,’ said Günther Hasinger, ESA Director of Science.

So far in its 30 year mission, the joint NASA and ESA space telescope has made 1.4 million observations and led to 17,000 research papers.

‘It is one of the most prolific space observatories in history and its rich data archive will fuel future astronomy research for generations to come,’ ESA wrote.

Each year, Hubble has a small portion of its precious observing time dedicated to taking a special anniversary image, showcasing particularly beautiful objects.

These observations continue to challenge scientists with surprising new findings and to fascinate the public with ever more evocative images.

This year it has marked 30 years of discovery with a portrait of two colourful nebulae showing how massive stars are able to sculpt their homes of gas and dust.

Although NGC 2014 and NGC 2020 appear to be separate in the visible-light image taken by Hubble, they are actually part of one giant star formation complex.

The star-forming regions  are dominated by the glow of stars at least 10 times more massive than our Sun.

These stars have short lives of only a few million years, compared to the 10-billion-year lifetime of our Sun.

‘The sparkling centerpiece of NGC 2014 is a grouping of bright, hefty stars near the centre of the image that has blown away its cocoon of hydrogen gas (coloured red) and dust in which it was born,’ wrote ESA. 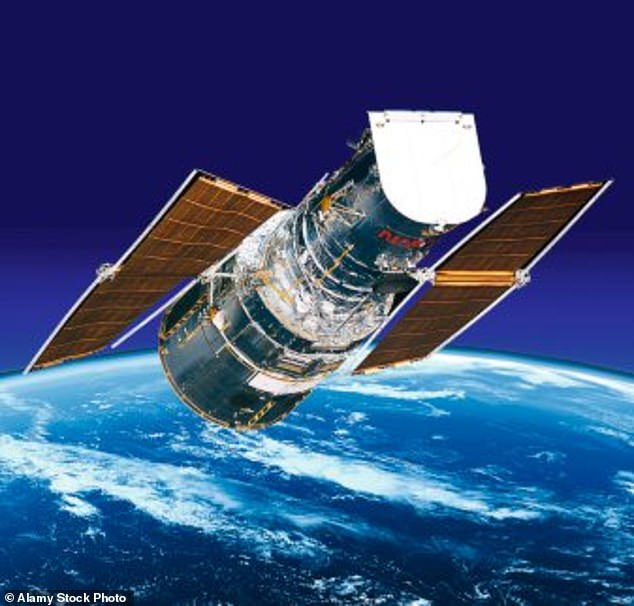 This artists impression shows the Hubble Space Telescope floating above the Earth. In its 30 years it has led to the creation of thousands of research papers

‘A torrent of ultraviolet radiation from the star cluster is illuminating the landscape around it.’

These massive stars also unleash fierce winds that are eroding the gas cloud above and to the right of them.

The gas in these areas is less dense, making it easier for the stellar winds to blast through them, creating bubble-like structures reminiscent of brain coral.

Hubble is due to be replaced in the coming years by the James Webb Space Telescope – another ESA and NASA joint project.