Unlike some notable others, Tottenham are doing just enough. Mauricio Pochettino will not be overly enthused by that but any deficiencies have been masked by results over the last seven days.

The state of this squad is fragile, however, and those involved at the club know it. Strikingly, the muscle injuries are mounting. Jan Vertonghen’s tight hamstring, sustained before half-time, is another for a list including Christian Eriksen, Hugo Lloris and Dele Alli. For those all to be coincidental would be some bad luck. 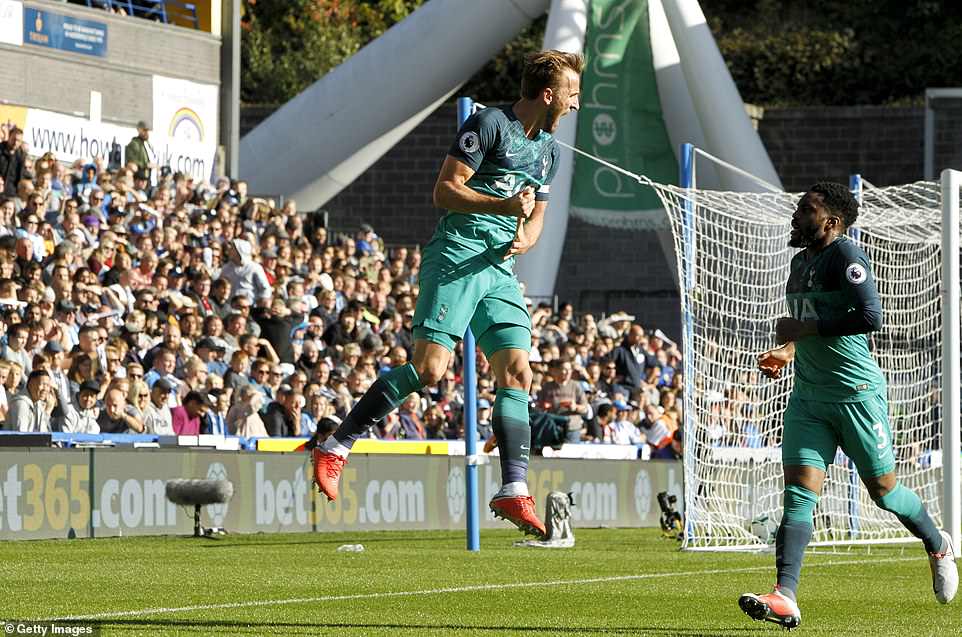 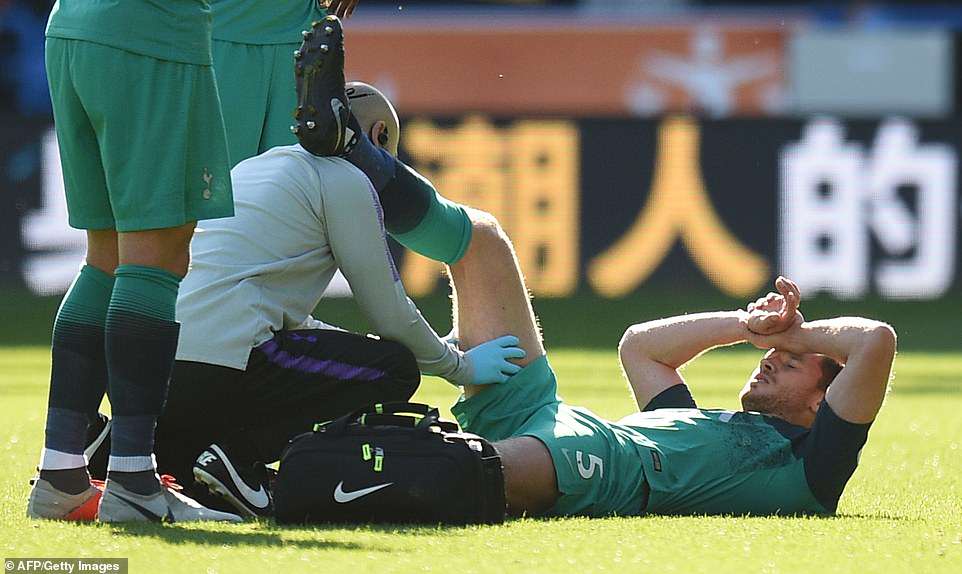 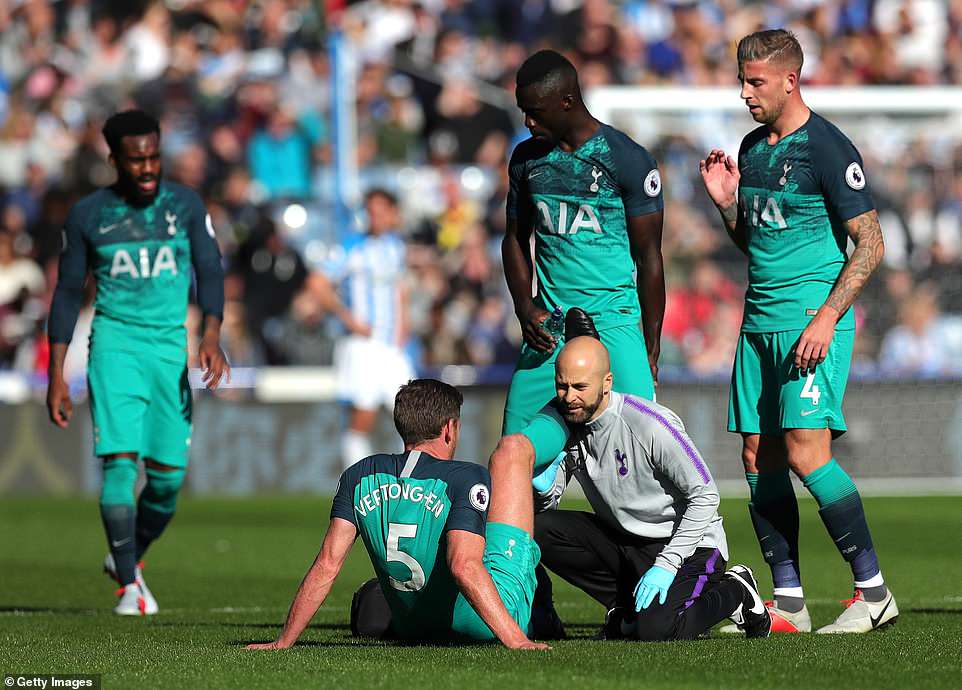 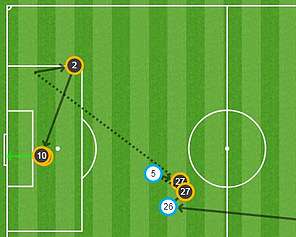 Mousa Dembele also came off at the break, with this at 2-0 thanks to a Harry Kane brace, presumably in a bid to rest up ahead of Barcelona in the Champions League on Wednesday. Kane, somewhat amusingly the Premier League’s top scorer at the John Smith’s Stadium after two goals here last year as well, cannot be afforded such luxury.

The England captain insists he is fit and well but very few could withstand such a lack of extended break following the World Cup, as evidenced by some of his team-mates out in Russia who have suffered as a consequence.

Pochettino, who is acutely aware of the injury ‘red zone’, will probably not see the best of Tottenham until November at the earliest. So just doing enough must be deemed good enough at the moment.

The three forwards – Lucas Moura and Son Heung-Min ably supporting Kane – were too much for David Wagner’s Huddersfield. Son was terrific, a menace on the break and crucial carrier of the ball all afternoon.

Huddersfield were caught in behind too easily after looking very bright for the opening 25 minutes. Christopher Schindler did not connect with the first ball near halfway, Moura saw an opening and chipped beyond a wrong-footed Terence Kongolo.

Kongolo manfully thwarted Moura into the box, pulling a hamstring in the process, before the move was recycled to Kieran Tripper. His delivery was delicious, Kane’s header accurate and Tottenham led.

Chris Lowe’s 25-yard effort was tipped wide by Paulo Gazzaniga but one became two after 34 minutes. This time Florent Hadergjonaj was not alive to a Danny Rose’s give and go with Son, allowing Rose to make his way into the area and throwing himself to the ground at the hint of a tug on his shirt. Wagner was incredulous at Craig Pawson’s decision; Kane sent Jonal Lossl the wrong way.

Yet for all this Tottenham never looked completely in control. Eric Dier struggled to retain the ball in midfield, the back three were met with an aerial bombardment from set-pieces and Pochettino remained agitated. Not quite as much as Huddersfield and their manager, who were incensed by the officiating of Pawson. For a referee, it is difficult to quieten the howls. 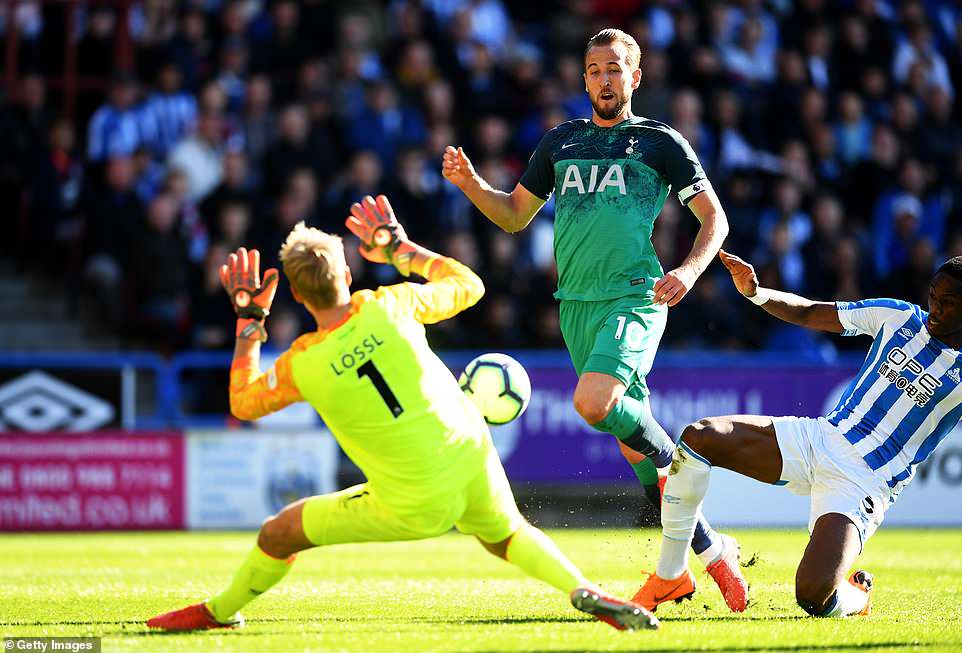 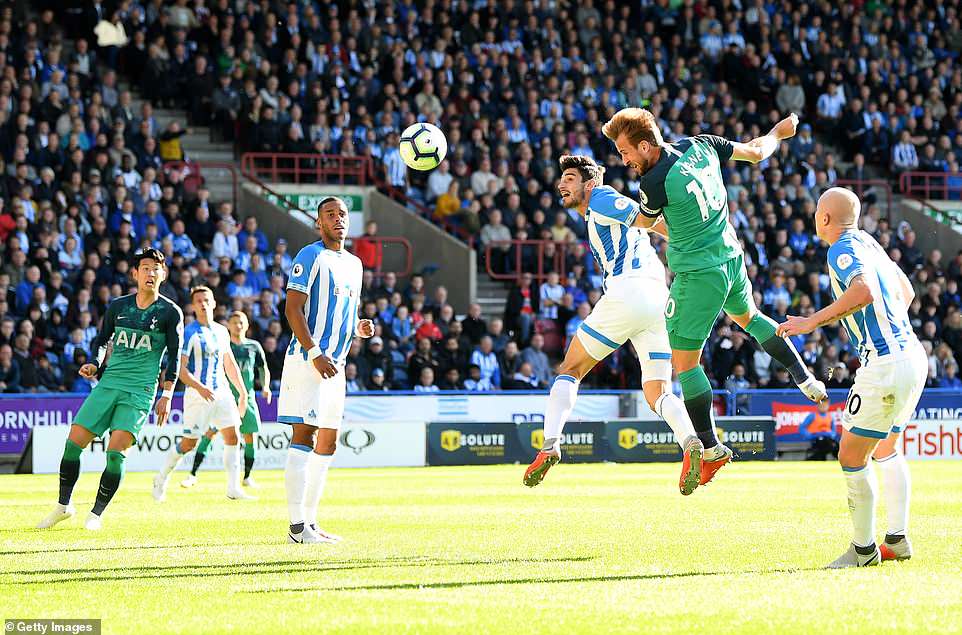 But he did not have to wait long for his next chance, which he converted with a powerful header to make it 1-0 on 25 minutes 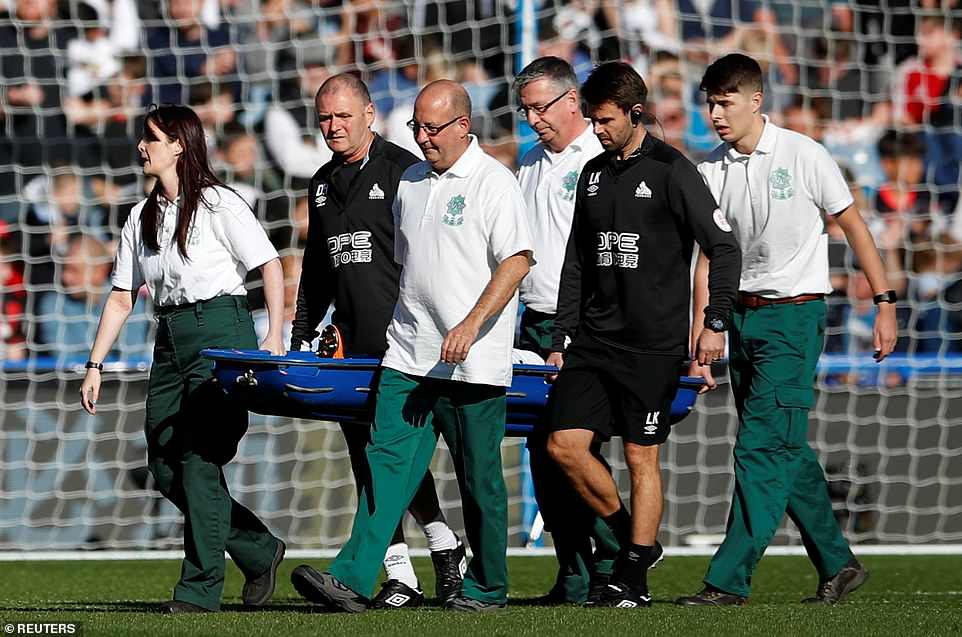 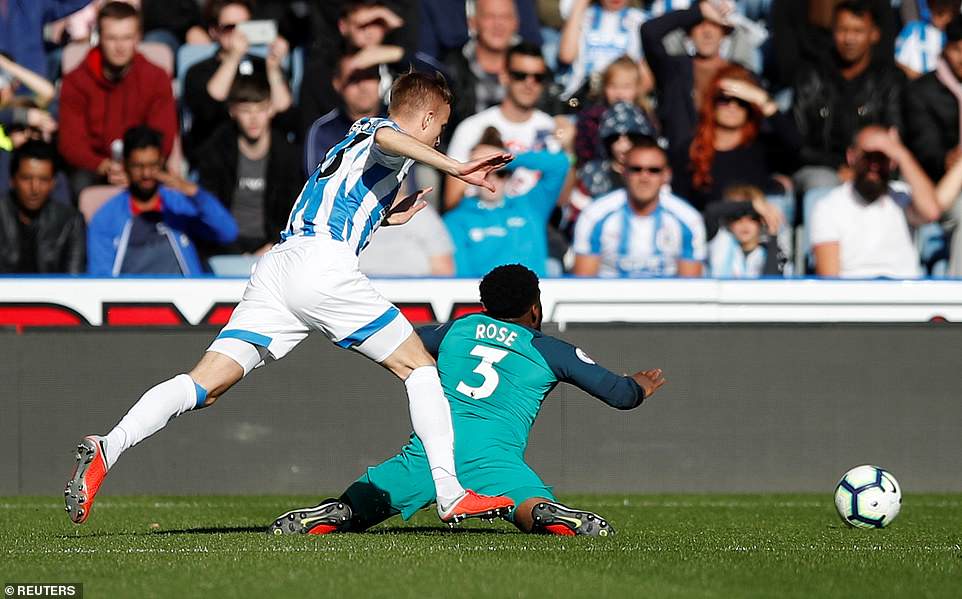 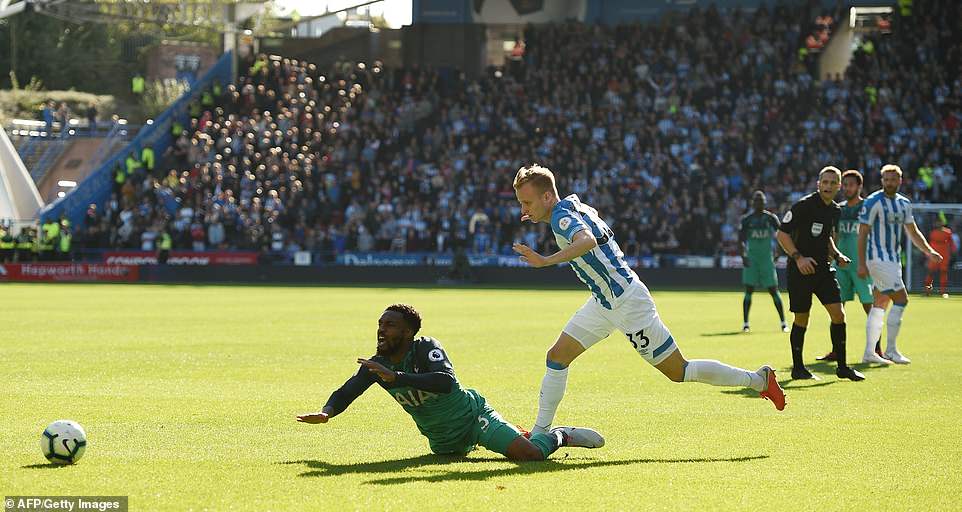 Referee Craig Pawson watched on from behind the incident before pointing to the spot, much to the annoyance of home fans

Huddersfield were not disheartened but lacked the requisite quality to carve something out of an industrious display – potentially their best this season.

Laurent Depoitre crashed a volley against the bar from Erik Durm’s cross, Gazzaniga remained alert enough to divert Isaac Mbenza’s curling effort wide with minimal fuss. The Argentine did his case no harm.

The goalkeeping situation is far from settled and that is mirrored by the tinkering of Pochettino too. He preferred a back three here to the four at Brighton last week, has flitted between a diamond or a genuine trio front in a bid to stave off the threat of fatigue in certain individuals.

That was not really an option available to him on Saturday, Erik Lamela potentially the only one saved for the Champions League date, and he will definitely be without Alli against Barcelona with a hamstring injury. Eriksen should be fit but quite how much the rest of Pochettino’s regulars have in the tank is questionable. 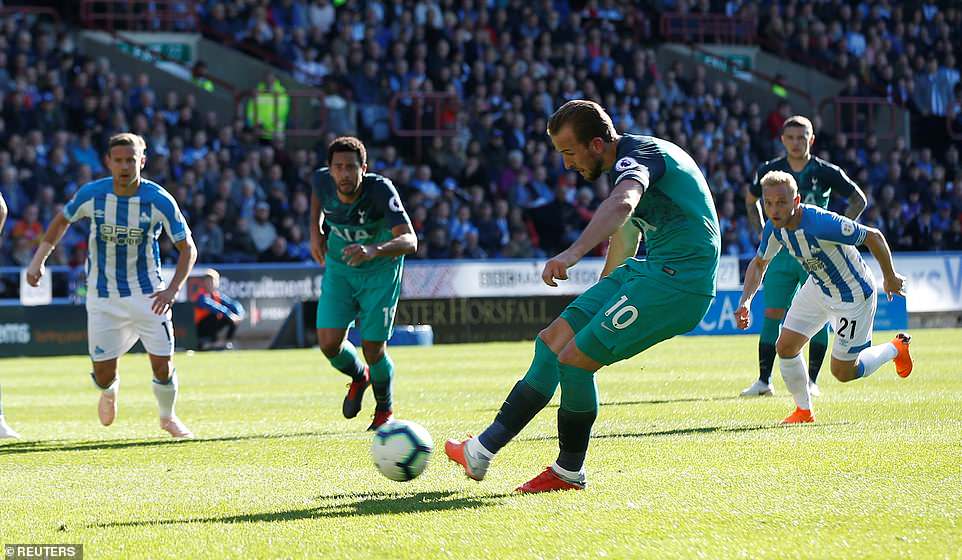 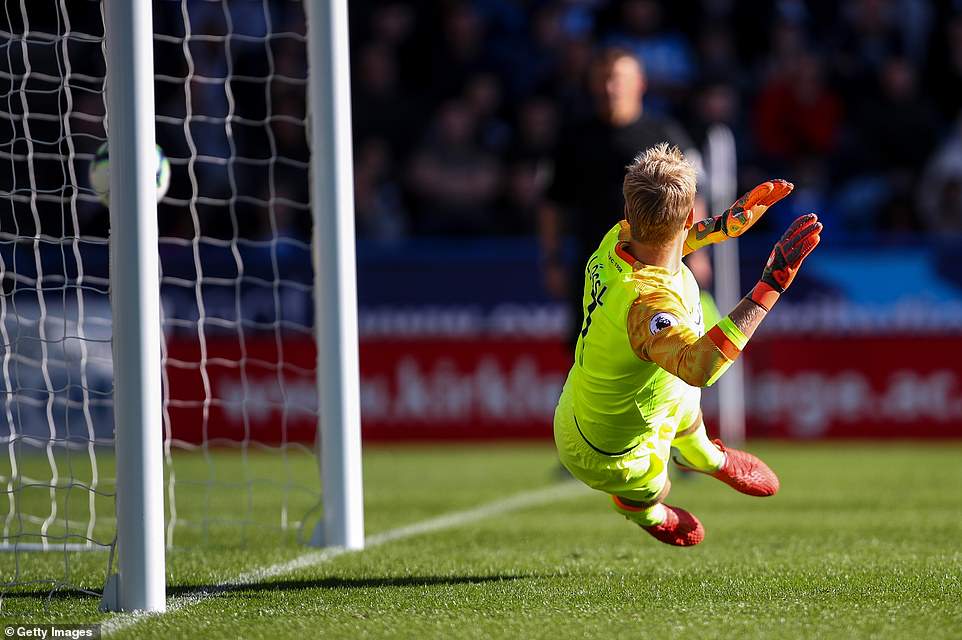 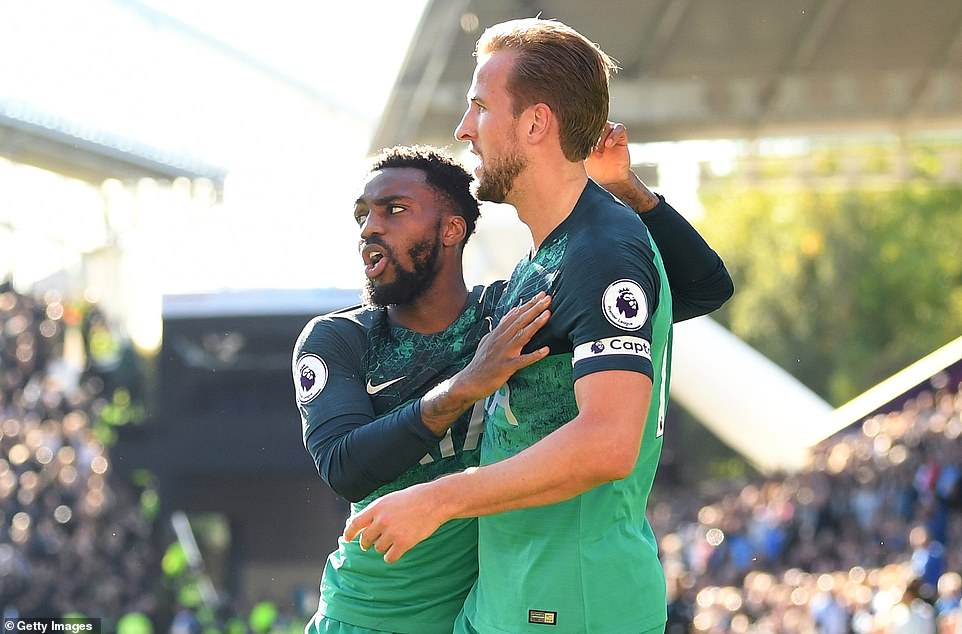 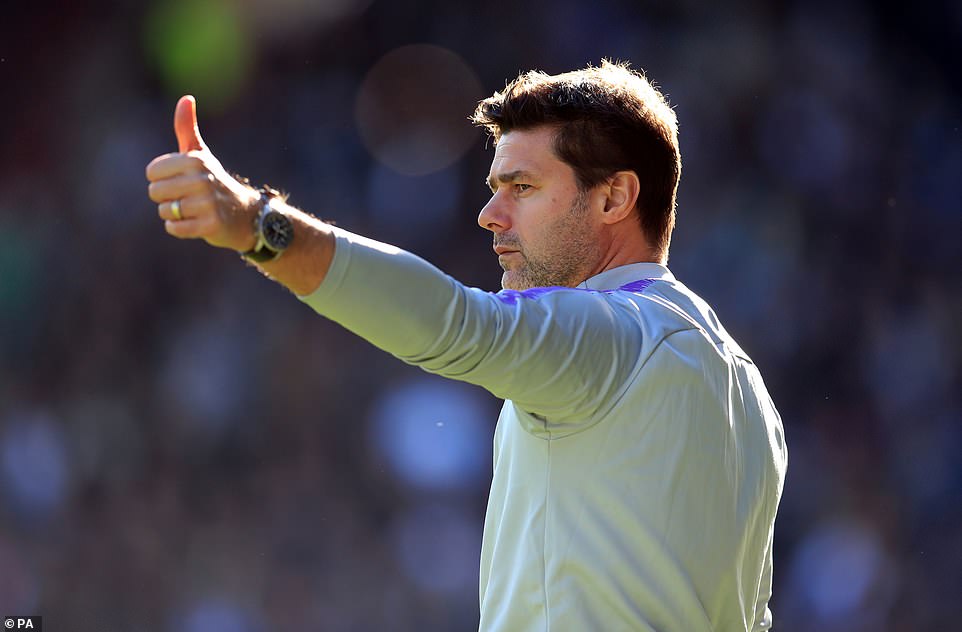 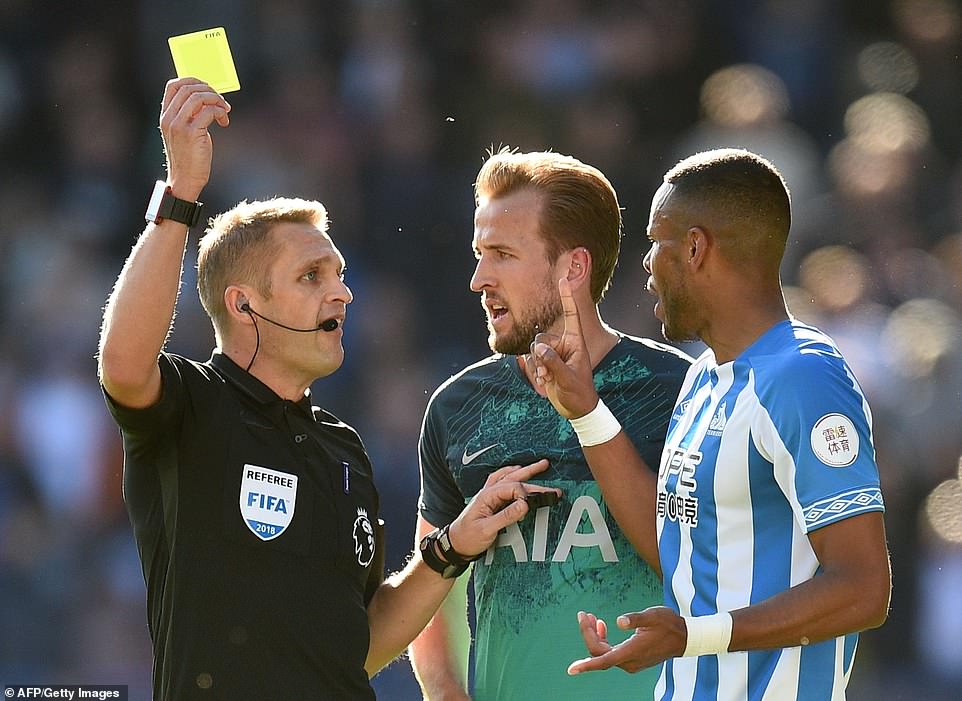